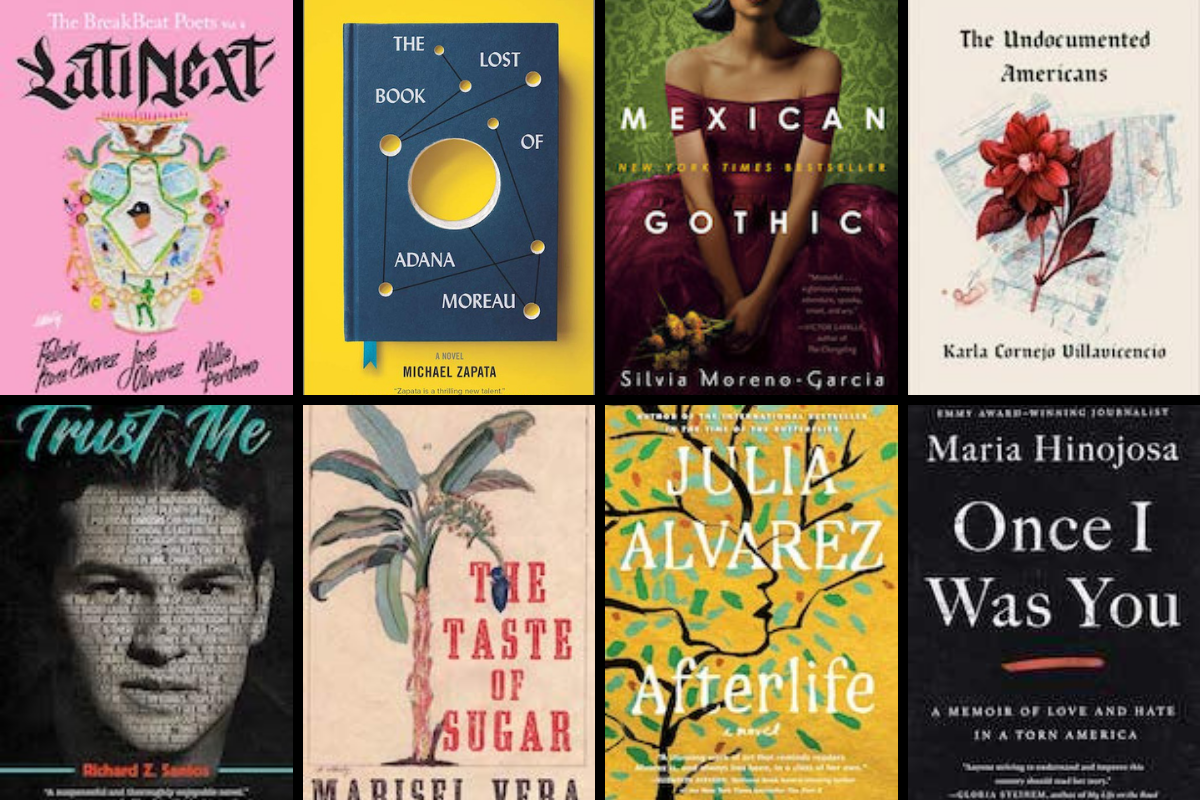 Editor’s Note: The author is a contributor to Latino Rebels and is not an employee of Futuro Media. He submitted this list with no consultation or input from anyone at Futuro Media, which is the company founded by Maria Hinojosa.

I had started off the year with the plans to cover Latinx books for Latino Rebels. Following exploitation of our stories with the release of American Dirt and the calls for reform of the publishing industry by #DignidadLiteraria, I had hoped to spend a good portion of my year spotlighting Latinx voices in literature. But this was not a normal year—we soon went into “Stay at Home” as my home state Colorado called it just weeks into March, and here we are, nine months later with COVID-19 still ravaging our communities and most of our mindspace occupied by the realities of survival.

I found myself struggling to find the words to describe the books below, their impact, their place until recently. It is almost the end of 2020 and I have finally found some words to describe my favorite Latinx books of 2020. They are rich and expansive in their views and the stories that they tell, because as the broader United States realized in November, we are not a monolith. Our experiences, our views, our stories are broad, and large, and our history is rich and vibrant. I hope that you enjoy some of the books that captured this fullness of this experience in 2020.

Trust Me by Richard Santos

Santos’ debut novel about Charles O’Connell, a down on his luck political consultant working to build a new reputation who ends up in Santa Fe working on a controversial airport project. His story parallels Gabriel Luna, a worker on the project who has been told that he has cancer, and urgently tries to reconnect with his teenage son. Both characters soon find that they are caught up in deception, fraud, and more. 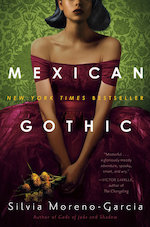 Moreno-Garcia’s fifth novel, Mexican Gothic is an exquisite gothic horror novel set in 1950s Mexico. Noemí Taboada receives correspondence from her cousin, newly married, asking her to come and save her, and is suddenly thrust into the world of High Place. As Noemí digs, she begins to uncover the details of her cousin’s husband and his family’s past. Moreno-Garcia’s way with language captures the reader. 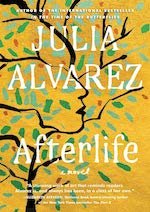 Alvarez’s first adult novel in over 15 years is a stunning, sharp, and poignant work grounded in the intricacies of immigration and life after losing a loved one. Alvarez is a true master and this, her latest masterpiece. 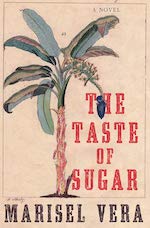 The Taste of Sugar by Marisel Vera

Vera’s epic tells the story of Vicente and Valentina Sánchez, two young lovers whose life is thrown into upheaval by the Spanish-American war and the San Ciriaco Hurricane. The two of them soon relocate to Hawaii, along with thousands of other Puerto Ricans in search of the American promise of prosperity. Vera’s work is especially timely detailing the beginnings of the strained relationship between Puerto Rico and United States that continue to this day. Vera does a wonderful job navigating interpersonal and geopolitical crises. 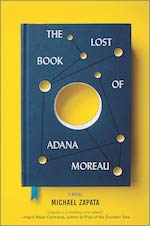 The Lost Book of Adana Moreau by Michael Zapata

Zapata’s tale, on its surface a book about a book, is a complex masterpiece that weaves through time and space, connected by a manuscript from a Latin American science fiction writer, Adana Moreau. Thought to have destroyed the only copy of her second book prior to her death nearly a hundred years prior, Saul Drower discovers the mysterious manuscript which leads him to New Orleans amidst Hurricane Katrina for answers. 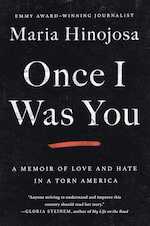 Once I Was You: A Memoir of Love and Hate in a Torn America by Maria Hinojosa

Hinojosa’s retelling of her own journey in the United States as a first-generation Mexican American. As Hinojosa grows up, she become more acutely aware of how white supremacy permeates all facets of her life—from school, friendships, to eventually the newsroom. One part memoir, one part social critique on the politics of immigration and a Democratic party that has been complicit in building this inhumane system, Hinojosa’s poignant memoir is a wonderful and personal reflection on what it means to be Latinx. 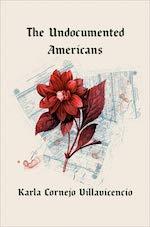 A National Book Award Finalist, Cornejo Villavicencio gives names and faces, fully three dimensional identities to the many undocumented Americans—including herself, a Harvard graduate, whose existence is often nameless and faceless, so many times relegated to the shadows in America. She follows those who were part of the World Trade Center cleaning crew, who struggle with health issues and cannot get health care due to being undocumented. A humane and humanizing look at the many who America so often overlooks. 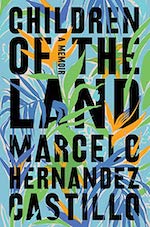 Children of the Land by Marcelo Hernandez Castillo

An unforgettable memoir chronicling Hernandez Castillo’s journey to the U.S. at the age of 5, where he suffers temporary blindness. He eventually regains his vision, but comes to understand the nature of what it means to be invisible, and to use that in order to remain ordinary and unseen. His book captures the full magnitude of what it means to try and build a future in a country that doesn’t see you as human. Hernandez Castillo captures in great details his own families’ experiences navigating a broken immigration system, his father’s deportation, and his family’s long wait to be reunited. 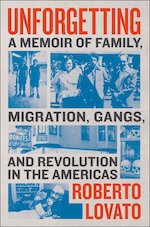 Unforgetting: A Memoir of Family, Migration, Gangs, and Revolution in the Americas by Roberto Lovato

Lovato’s memoir moves between 1970s California (where Lovato ends up in a gang) and details his account of gang life, and 1980s El Salvador, where Lovato joins the guerrilla movement in a fight against a corrupt government. A timely work exploring intergenerational trauma through the lens of Roberto and his father Ramón, and the rage that fueled both of them. 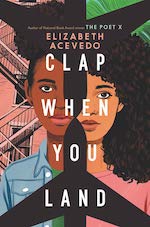 Clap When You Land by Elizabeth Acevedo

Acevado’s novel-in-verse about two sisters as they grapple with their father’s death and uncover their family’s past. She captures the intricacies of family grief, secrecy and love, along with the struggle of forgiveness. 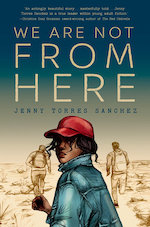 We Are Not From Here by Jenny Torres Sanchez

Three Guatemalan teenagers —Pulga, Chico, and Pequeña—flee their hometown and embark on a perilous journey from Central America to Mexico in hopes of seeking safety in the United States. 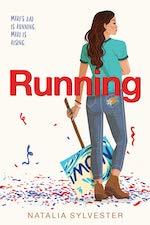 A gorgeously written YA debut from Sylvester about 15-year-old Cuban American Mariana Ruiz,  who must make the difficult decision to stand up and speak out against her father as she learns of his political power and position. 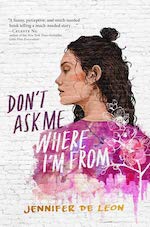 A funny, moving story of a first-generation American Latina who tries relentlessly to fit in at her all-white school, until she decides she must speak out against racism and tell her truth. 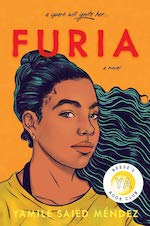 A story set in Argentina of a young woman who lives between two worlds as a respectful, careful daughter in the home and an ambitious, passionate soccer star on the field. Camila and Diego, two childhood friends in Rosario, Argentina grow up to fall in love —with each other and with the sport, with both navigating the respective worlds of men’s and women’s fútbol, Diego becoming a star in Italy, and Camila fighting to obtain her dream. 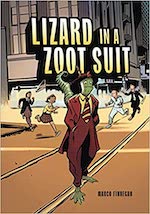 Lizard in a Zoot Suit by Marco Finnegan

This wonderful mix of sci-fi and real life collide in this graphic novel about the story of two girls, Cuata and Flaca, who go up against the powers that be and challenge societal norms along with the help of a mysterious stranger in a Zoot Suit. 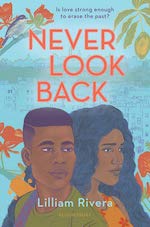 Never Look Back by Lilliam Rivera

To call Rivera’s latest book simply a modern-day retelling of Orpheus (Pheus) and Eurydice (Eury) set in the Bronx does the work a disservice. It is so much more than that. It’s a love story, an exploration of trauma and grief and the spirits —both real and imagined— that hang over us. It’s an ode to the Bronx and the multiple Latinx cultures that reside within, an examination of the lingering effects of PTSD. Rivera is a master storyteller. 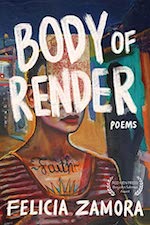 Body of Render by Felicia Zamora

A necessary, yet devastating rendering of what happens to the body politic of a nation when humanity’s basic human rights are imperiled or stripped away. 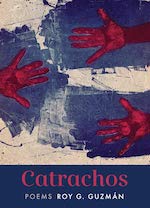 Guzman’s debut is a humorous and inventive collection of poems, a queer-coming of age story, an immigration narrative, and so much more. The excellent “Queerodactly” from the collection can be read here. 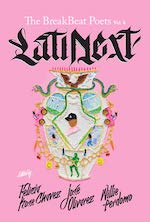 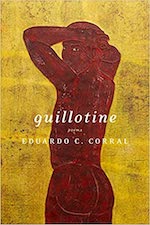 Corral’s National Book Award nominated collection weaves between the personal and the political, using language and form to capture the land of the frontera. Read his piece, Testament Scratched into a Water Station Barrel, here. 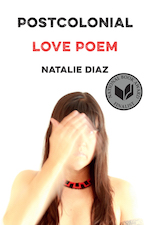 Diaz’s brilliant second collection is an exploration and deconstruction of America and centering of the hope and promise of the future.

Manuel Aragon is a Latinx writer, director, and filmmaker from Denver, CO. He is currently working on a short story collection, Norteñas. His work has appeared in ANMLY. His short story, “A Violent Noise,” was nominated for the 2020 PEN/Robert J. Dau Short Story Prize for Emerging Writers. Twitter: @Spacejunc.