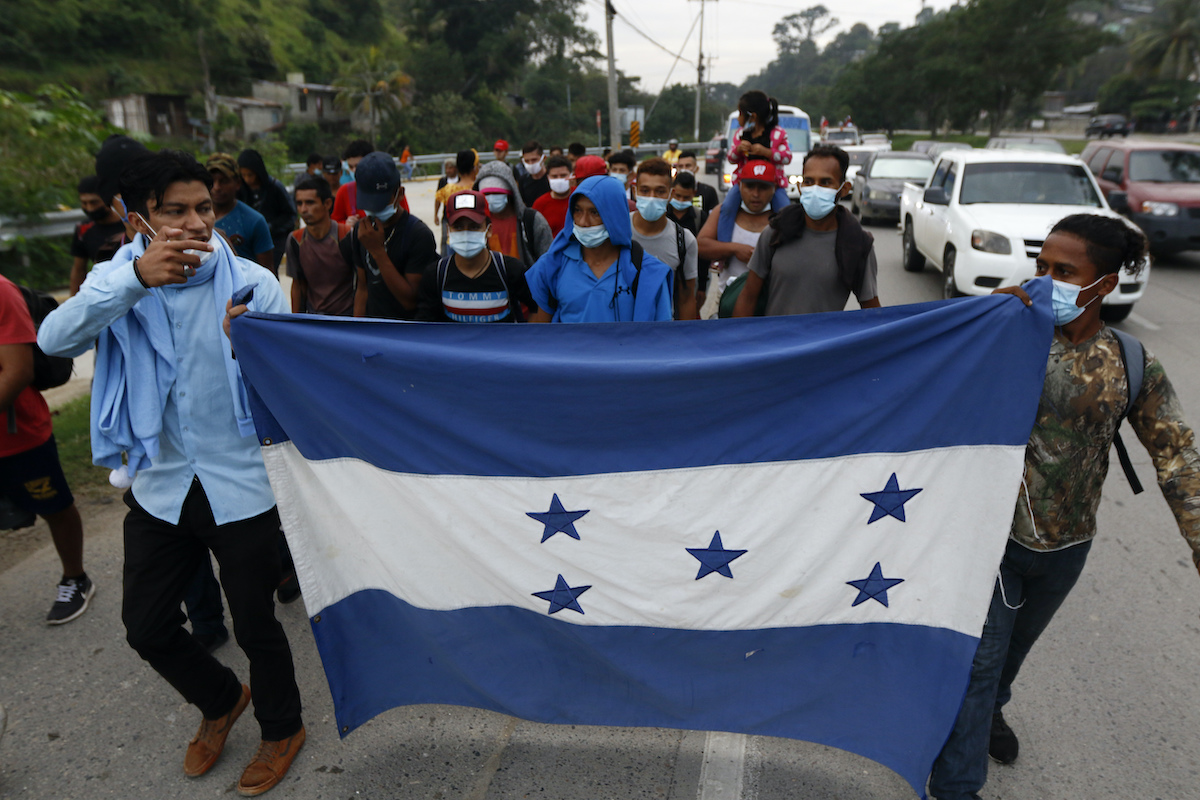 Migrants trying to reach the U.S. border walk along a highway in Choloma, Honduras, Thursday, January 14, 2021. About 200 Honduran migrants, two holding a Honduran national flag, resumed walking toward the border with Guatemala early Thursday, a day before a migrant caravan was scheduled to depart San Pedro Sula. (AP Photo/Delmer Martínez)

SAN PEDRO SULA, Honduras (AP) — Hundreds of migrants hoping to reach the U.S. border gathered outside a bus station in this Honduran city Thursday despite continued signs from Mexico and other Central American governments that they would not be allowed through.

Santos Demetrio Pineda was one of hundreds who showed up with little more than the clothes on their backs for the long, unlikely journey, made that much harder by the coronavirus pandemic.

“We lost everything in the hurricane,” said Pineda, referring to two Category 4 hurricanes that hit Honduras in November. “We can’t just sit around after what happened to us.”

“We are going to leave the country, to ask for help wherever they receive us,” he said.

Asked how they would make it past lines of police and immigration agents already preparing for them, Pineda said, “We are going to ask God to open the doors.”

Earlier, 200 Honduran migrants walked and caught rides up a highway toward the border with Guatemala on Thursday, a day before a migrant caravan was scheduled to depart San Pedro Sula.

That first group set out Wednesday but paused at night before reaching some 75 police officers, dressed in riot gear, who waited along the highway on the outskirts of San Pedro Sula. One officer said the intention was to stop the migrants from violating a pandemic-related curfew, check their documents and make sure they weren’t traveling with children that were not their own.

By Thursday, more migrants arrived at San Pedro Sula’s bus terminal. The station has been the main departure point for caravans in the past and several hundred migrants could be seen around the terminal.

Dolores Efrain Ortega, a bricklayer from the town of Cofradía, said he had traveled the route six times before.

“Here there are no jobs. Even if you are a bricklayer, there is no work,” Ortega said, adding he was leaving “to get ahead, to have my own house.”

But the migrants faced the additional challenge of governments that agreed earlier this week to enforce immigration laws at their borders. 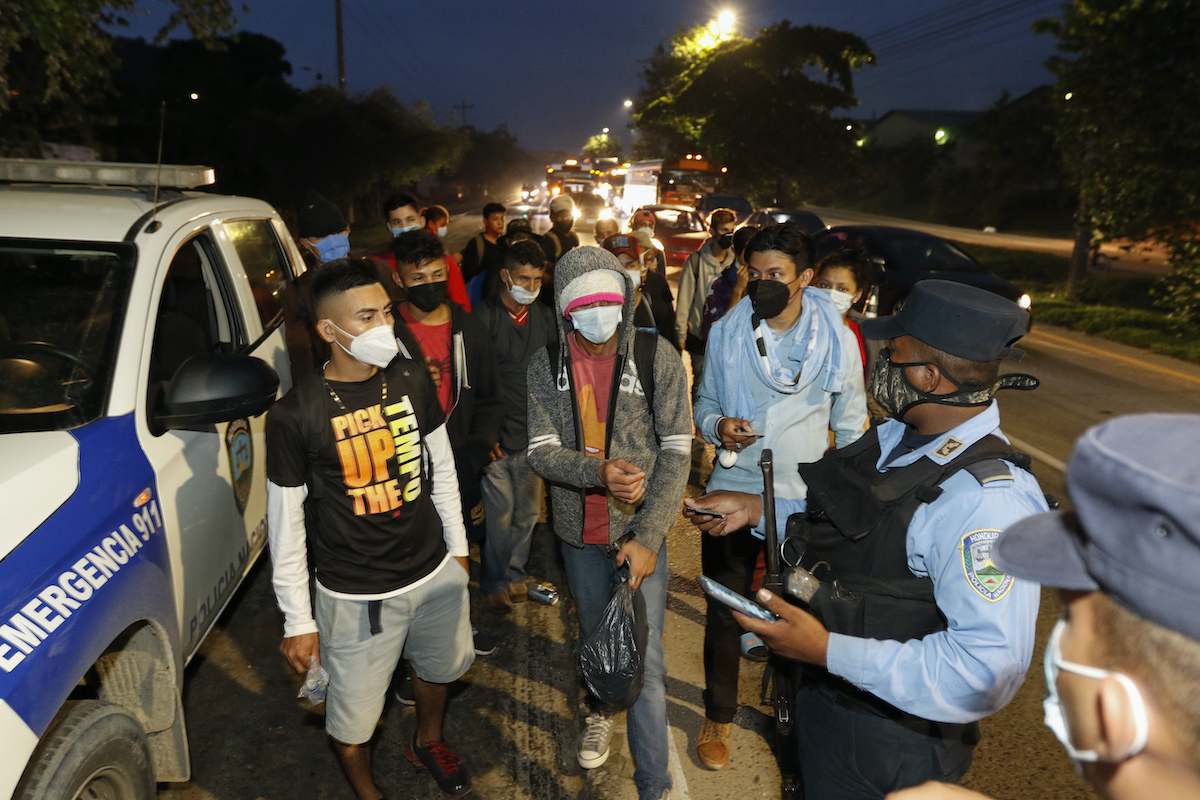 Police at a roadblock check the documents of migrants before allowing them to continue toward the Guatemalan border, on the highway leading to Choloma, Honduras, from San Pedro Sula, Thursday, January 14, 2021. About 200 Honduran migrants resumed walking toward the U.S. border, a day before a migrant caravan was scheduled to depart the city of San Pedro Sula. (AP Photo/Delmer Martínez)

On Thursday, Mexico’s National Immigration Institute posted videos showing hundreds of agents and National Guard members drilling on the southern border. It said the agents are “keeping vigilant in the states of southern Mexico … to enforce the immigration law. ”

For weeks, a call for a new caravan departing Jan. 15 has circulated on social networks. But previous caravans have been turned back.

Ariel Villega, from the town of Ocotepeque, was walking with his wife and 10-year-old son. Aware of the hurdles that awaited them, Villega said, “We’ve got everything, the passport and the COVID test.”

Guatemalan President Alejandro Giammattei on Wednesday night decreed a “state of prevention” along the country’s border with Honduras. The decree noted the threat of migrants entering without required documentation and without following pandemic-related screening at the border. Guatemala is requiring proof of a negative COVID-19 test. The decree said more than 2,000 national police and soldiers would be stationed at the border.

The Mexican government said Wednesday that it and 10 other countries in North and Central America are worried about the health risks of COVID-19 among migrants without proper documents.

The statement by the 11-member Regional Conference on Migration suggests that Mexico and Central America could continue to turn back migrants due to the perceived risks of the pandemic.

The group “expressed concern over the exposure of irregular migrants to situations of high risk to their health and their lives, primarily during the health emergency.”

On Thursday, Mexican officials said they discussed migration with U.S. President-elect Joe Biden’s pick for national security adviser, Jake Sullivan, and raised “the possibility of implementing a cooperation program for the development of northern Central America and southern Mexico, in response to the the economic crisis caused by the pandemic and the recent hurricanes in the region.”

When hundreds of Hondurans tried to form a caravan last month, authorities stopped them before they even reached the Guatemala border. Other attempted caravans last year were broken up by Guatemalan authorities before they reached Mexico.

Pressure to migrate has only been building. Central America was hit with two Category 4 hurricanes in November, devastating a region already struggling with the pandemic. The storms destroyed crops, shuttered businesses and displaced thousands.

Migrants have also expressed hope that they could receive a warmer welcome at the U.S. border under the administration of President-elect Biden, who takes office next week.

One response to “Honduran Migrants Trek North Toward Guatemalan Border”