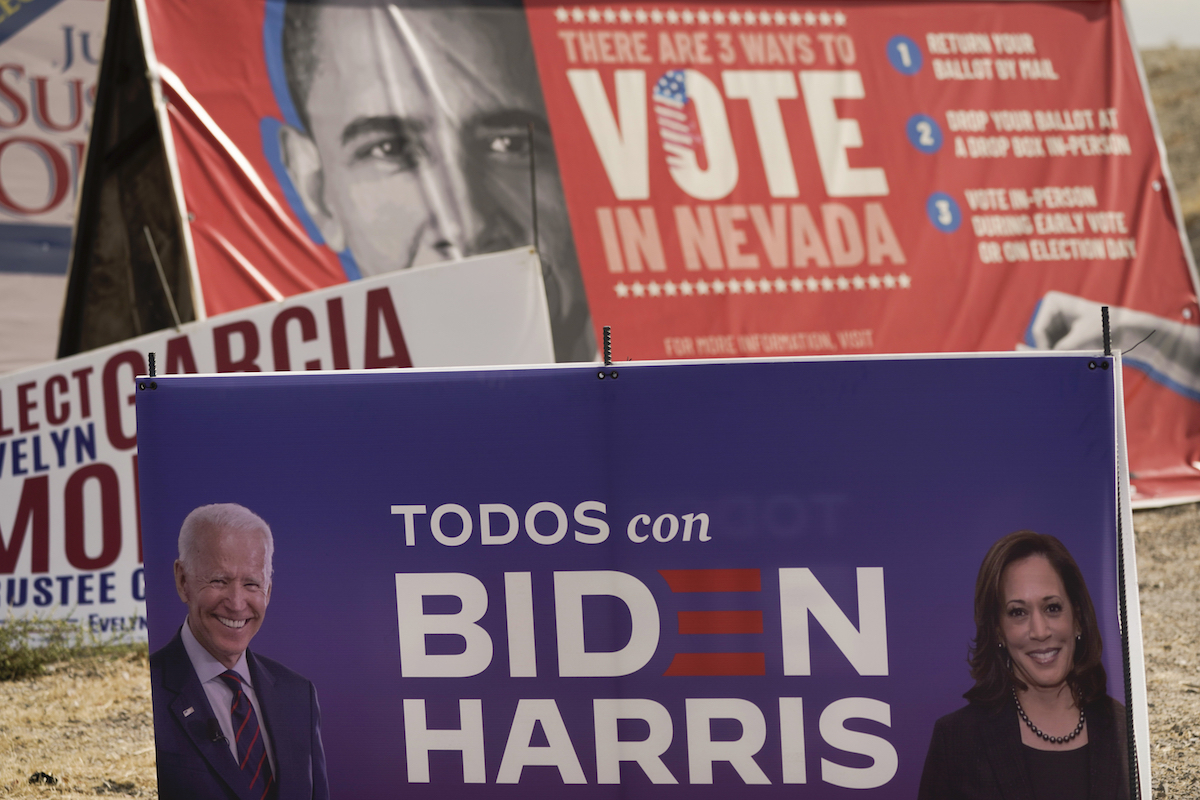 A study released this week by the UCLA Latino Policy & Politics Initiative (UCLA LPPI) estimated that a record 16.6 million U.S. Latinos voted in the 2020 national election —a 30.9% increase from 2016— resulting in key state victories for the Democratic presidential ticket of Joe Biden and Kamala Harris.

The 30.9% increase “was the single largest 4-year increase in Latino vote ever,” and “was nearly double the nationwide 15.9% growth in ballots cast between the 2016 and 2020 presidential elections,” the study noted.

“Latino vote growth was stronger and outpaced the national surge of voters in 2020. This is important because much of the national coverage of the Democrat-Republican vote split assumes a stagnate electorate with the same number of voters,” Dr. Matt Barreto, professor of Political Science of Chicana/o Studies and UCLA LPPI’s faculty director, told Latino Rebels. (In 2020, Barreto was hired by the Biden campaign to direct polling and focus group research for Latino voters. He stopped working for the campaign after the election.) 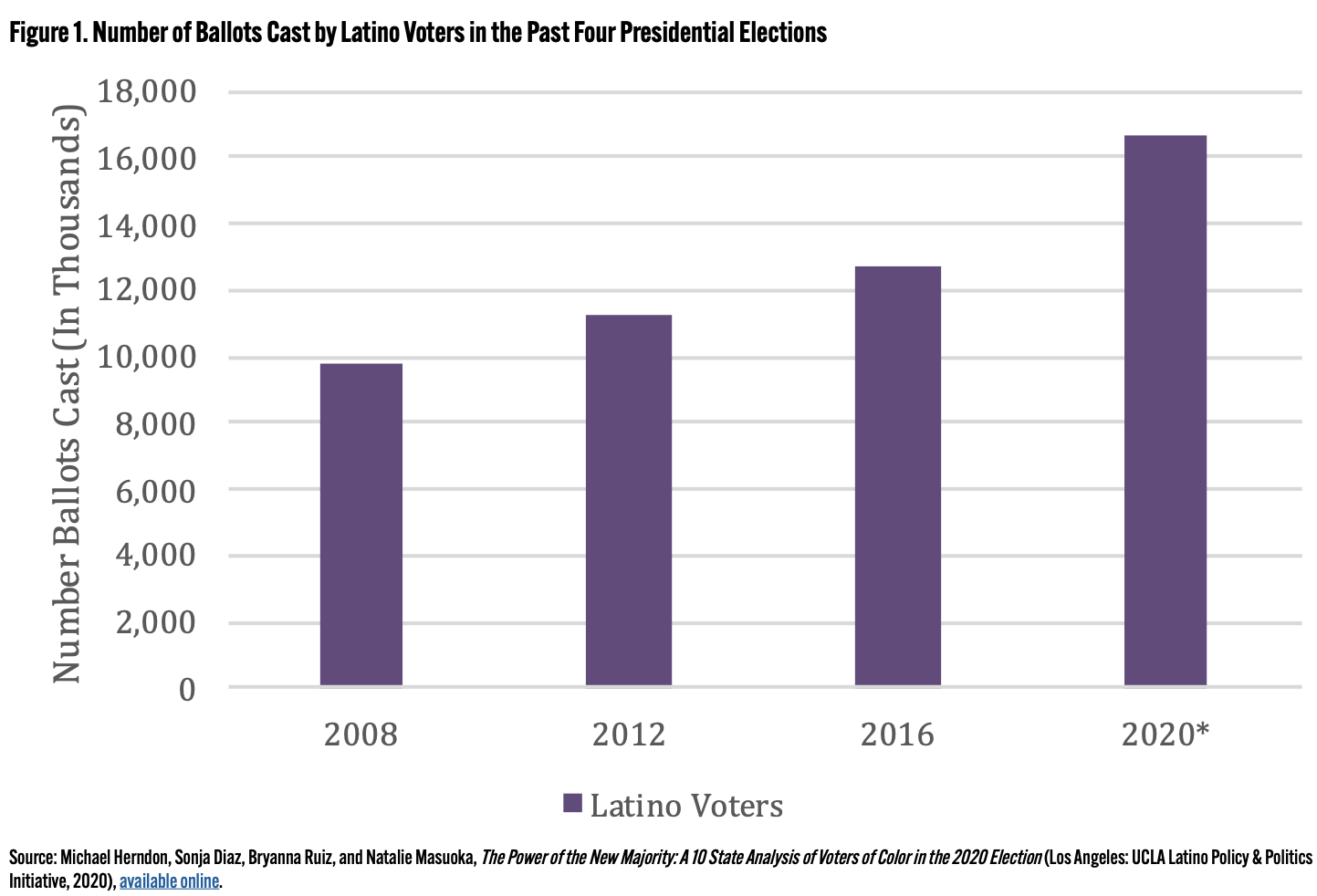 The historic turnout cited in the UCLA LPPI study played a role in several key states that the Biden-Harris ticket won, including Arizona, Georgia, Colorado, New Mexico, Nevada, Pennsylvania, and Wisconsin. An analysis of precincts in Arizona, Colorado, New Mexico, Nevada, Pennsylvania, and Wisconsin showed that Biden-Harris won U.S. Latino voters by a 3-to-1 margin in the race against Donald Trump and Mike Pence. In Georgia precincts, according to the study, Biden-Harris won by a 2-to-1 margin.

“We provide the most comprehensive analysis to date of how Latino voters, who are diverse across many geographies, voted in the 2020 presidential election,” Sonja Francine Marie Diaz, UCLA LPPI’s founding director. wrote in the study’s executive summary. “We analyze actual votes cast to better understand the electoral choices of Latino voters in 13 states that together account for over 80% of all Latino registered voters in the United States. By analyzing ballots cast rather than relying on exit polls, we reduce errors that emerge in exit interviews due to  “small samples, unrepresentative selection of survey respondents, incomplete understanding of early and absentee voters, and language bias. Therefore, this report provides a unique contribution to understanding the Latino vote in 2020, unlike what has been published elsewhere.”

Arizona: “In high-density precincts, Biden received almost 74% of the votes, compared to the almost 46% support he received in low-density precincts. Precincts with less than 5% Latino voters favored Trump by a 7.8 percentage point difference.” 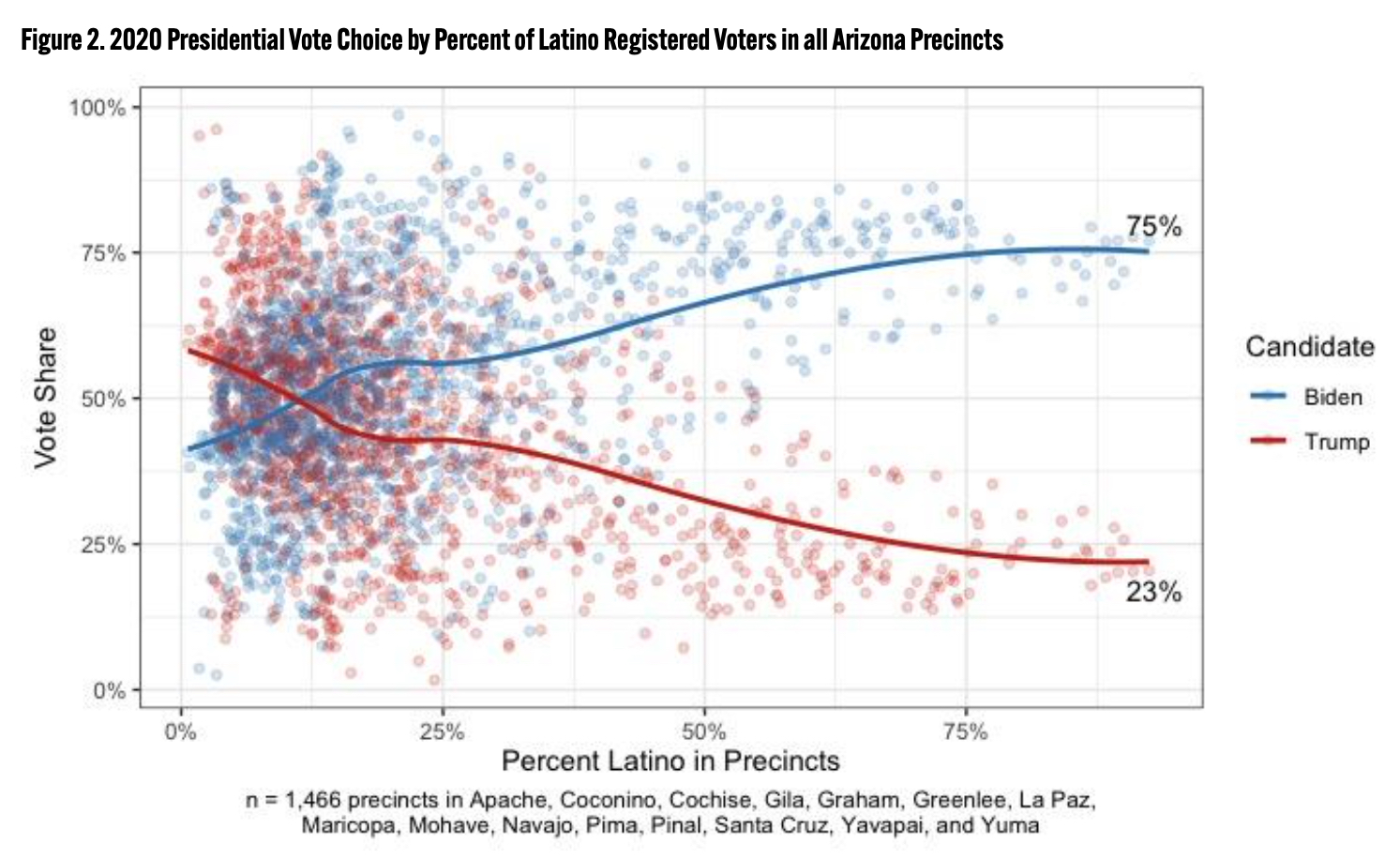 Colorado: “Voters in precincts with high concentrations of Latino voters (60% or higher) were more likely to vote for Biden over Trump: 79.4% and 18.4%, respectively. Voters in precincts with less than 5% Latino voters also favored Biden, but the difference in candidate preference is not as stark. 57.1% of voters in low-density Latino precincts voted for Biden, while 40.4% supported Trump.”

Georgia: “Voters in precincts with high concentrations of Latino registered voters (30% or higher) were more likely to vote for Biden over Trump: 59.2% and 39.1%, respectively. Voters in precincts with less than 2.5% Latino voters, which have large concentrations of African Americans, also favored Biden, with a much greater difference in candidate preference: 79.3% of registered voters in low-density Latino precincts voted for Biden, while 19.9% supported Trump.” 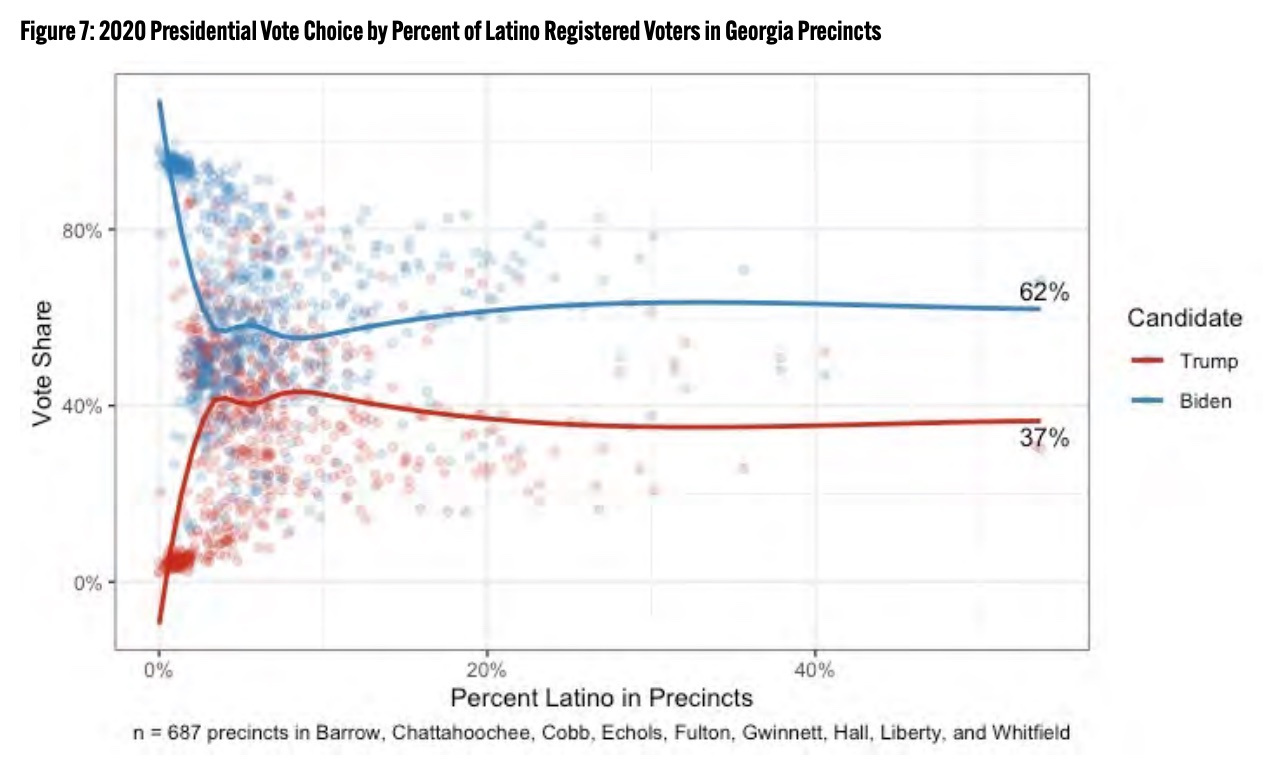 Nevada: “Voters in precincts with high concentrations of Latino voters (60% or higher) were more likely to vote for Biden over Trump: 75% and 22.8%, respectively. In contrast, voters in low-density precincts, (10% Latino or less), favored Trump over Biden by more than 17 percentage points (57.6% for Trump vs. 40.5% for Biden).” 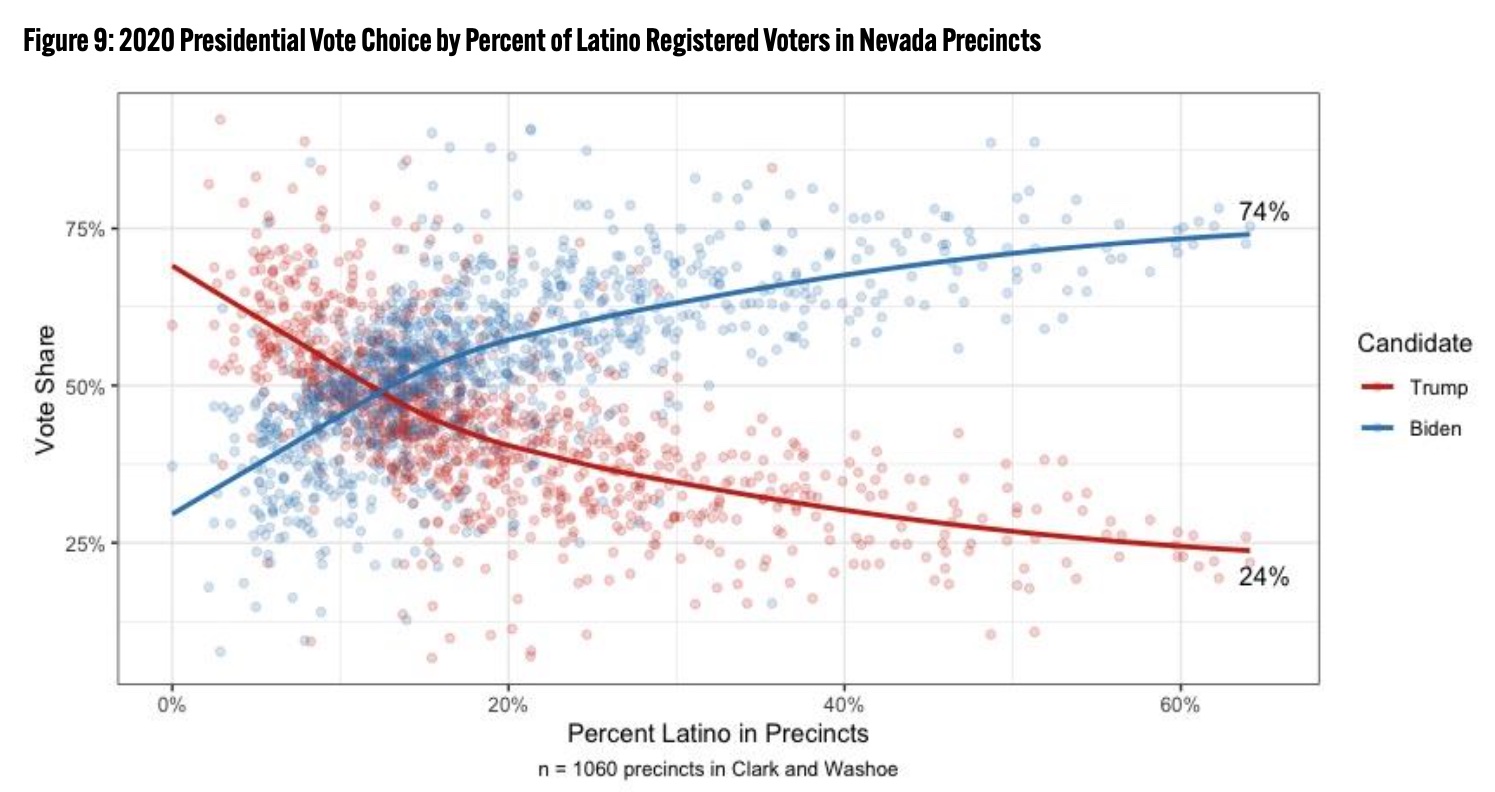 New Mexico: “Voters in high-density precincts (75% Latino registered voters or more) favored Biden with 70.5% of the vote, while only 59.2% of the voters in low-density Latino precincts (less than 15% Latino) supported Biden.”

Wisconsin: “Voters in precincts with greater than 50% Latino registered voters were close to four times as likely to vote for Biden (77.3%) than for Trump (21.7%). The difference is even greater in precincts with less than 5% Latino voters: 80.3% of voters supported Biden, with a 61.9 percentage point difference in support of Trump.” 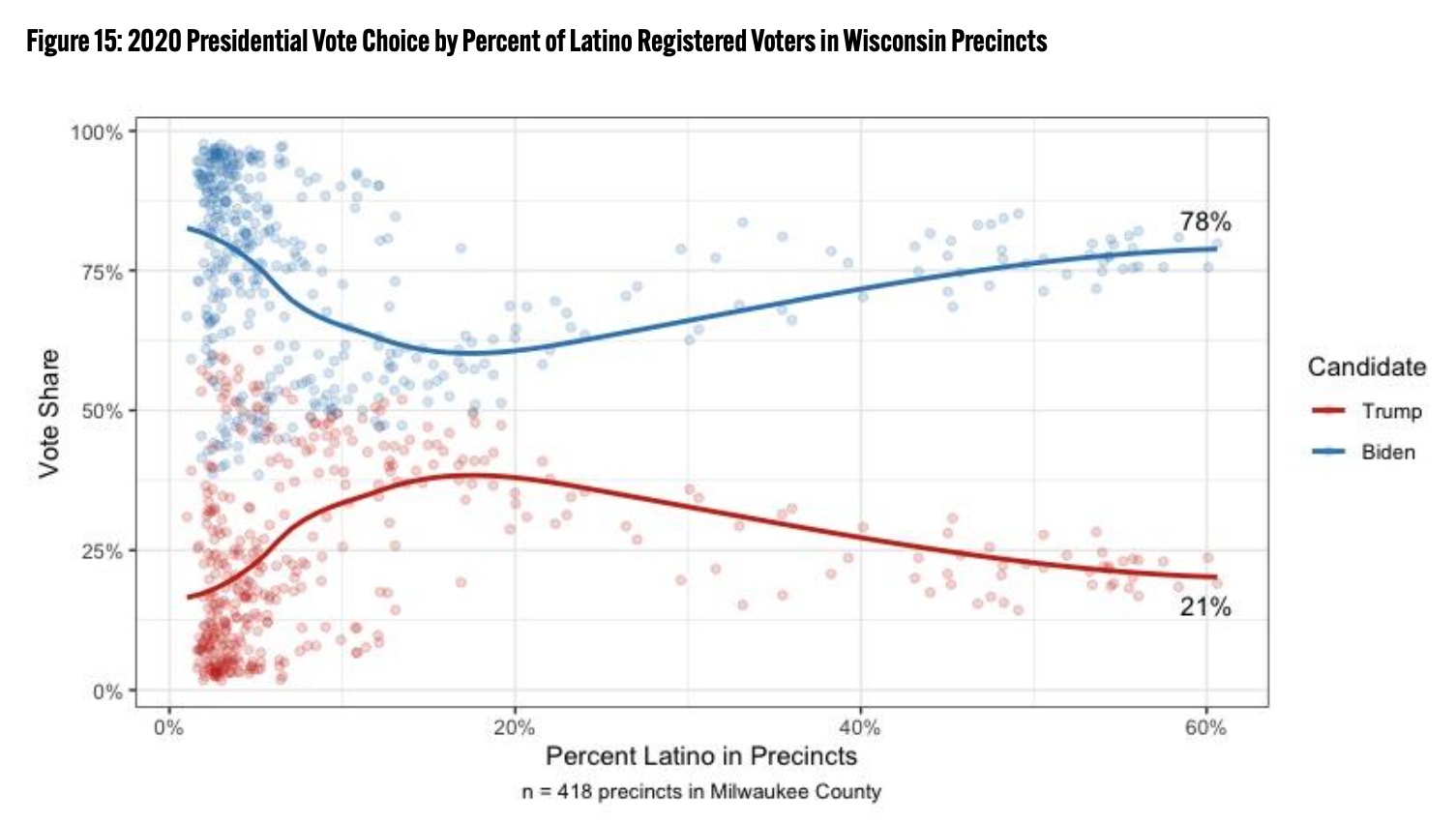 “Overall, when taking both increased turnout and steady vote for the Democratic ticket, Latino voters were a critical part of the coalition which elected Biden and Harris,” Barreto said, noting that the increased turnout led to even stronger support than what he thinks political pundits have been reporting.

He used the following example to make his point.

“Yes, there was a drop-off in the Latino vote share for Biden as compared to Hilary Clinton,” Barreto added. “However, it is important to put that into perspective—2016 represented a year when Clinton did particularly well and Trump did particularly poorly with Latinos. In 2020, the vote reverted back to a fairly normal trend of about two-to-one or close to 70-30 vote for Democrats. So while there was a drop-off, it is not a ‘sky is falling’ drop-off to incite panic. Instead, our 13-state data shows different patterns across different states to provide clues as to where each party needs to work harder, invest more and mobilize Latinos to earn their votes.”

The study also contained an analysis of precincts in the following states: California, Florida, Illinois, New York, Texas and Washington. Of these six states, Biden-Harris won four of them (CA, IL, NY, WA) and Trump-Pence won two (FL and TX). Here is a breakdown of those states cited in the study:

Florida: “In high-density Latino precincts in Miami-Dade (80% Latino or more), Trump received 61.1% of the votes, on average. This stands in sharp contrast with precincts with less than 15% Latino voters, where Trump only received 10.9% of the vote. 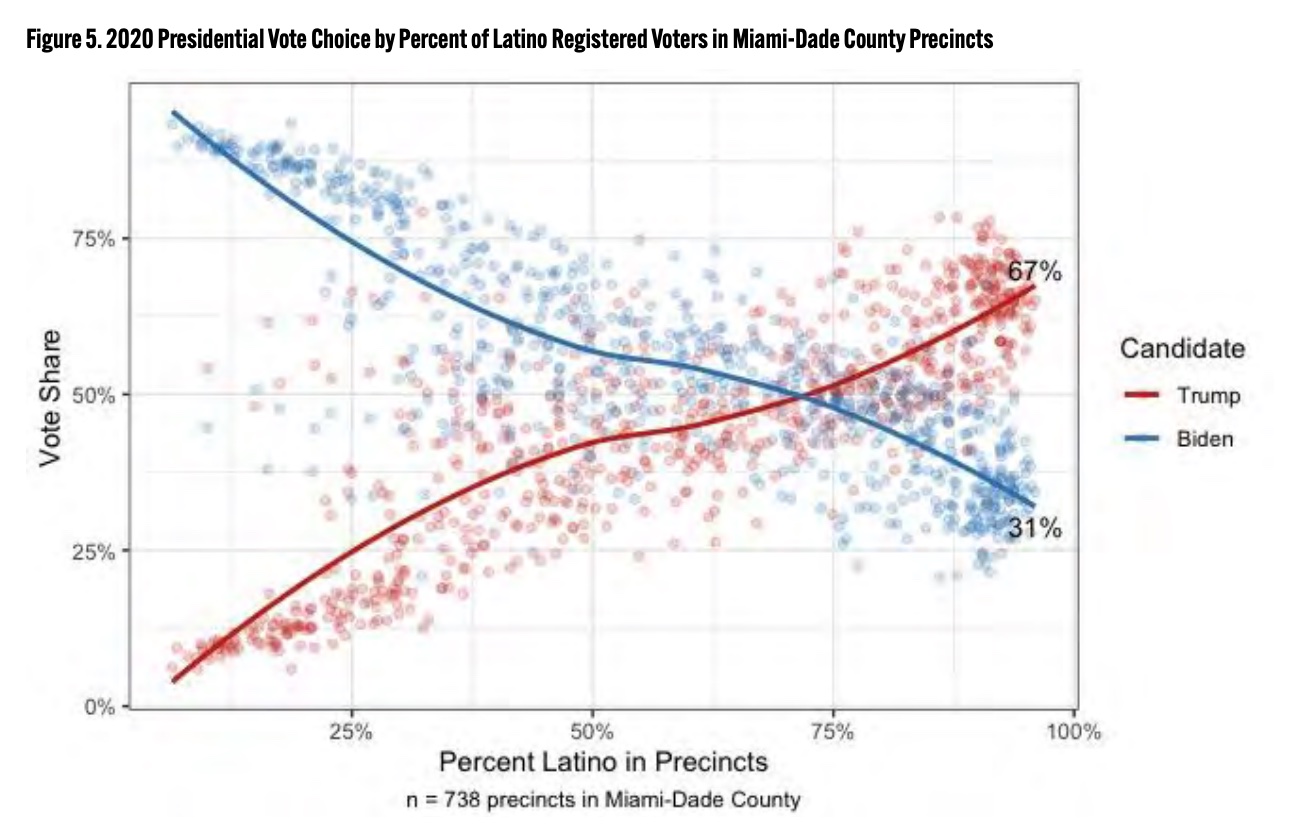 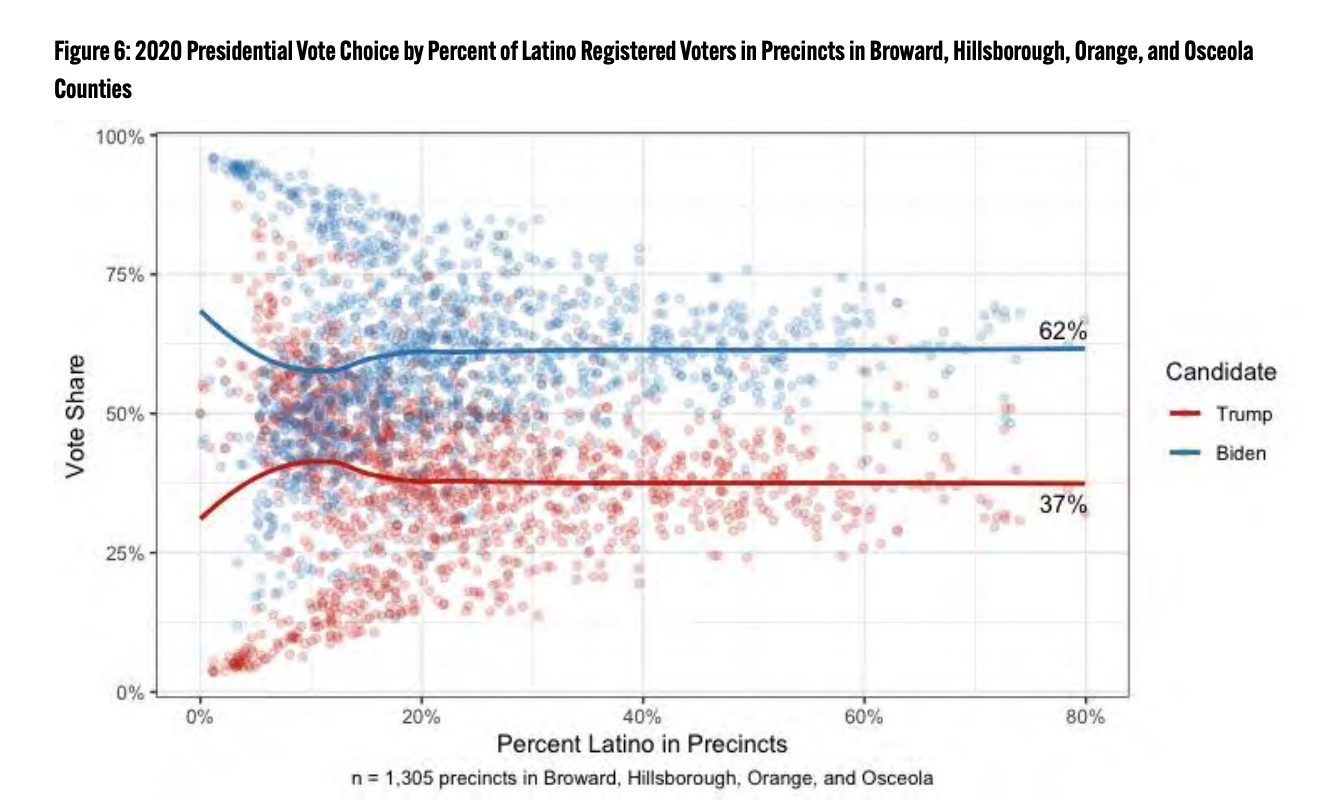 Illinois: “precincts with high concentrations of Latino voters (75% or higher) were more likely to vote for Biden over Trump: 80.5% and 17.7%, respectively. Voters in precincts with less than 5% Latino voters also favored Biden, but the difference between the two candidates is smaller: 68.7% of voters in low-density Latino precincts voted for Biden, while 29.9% supported Trump.” 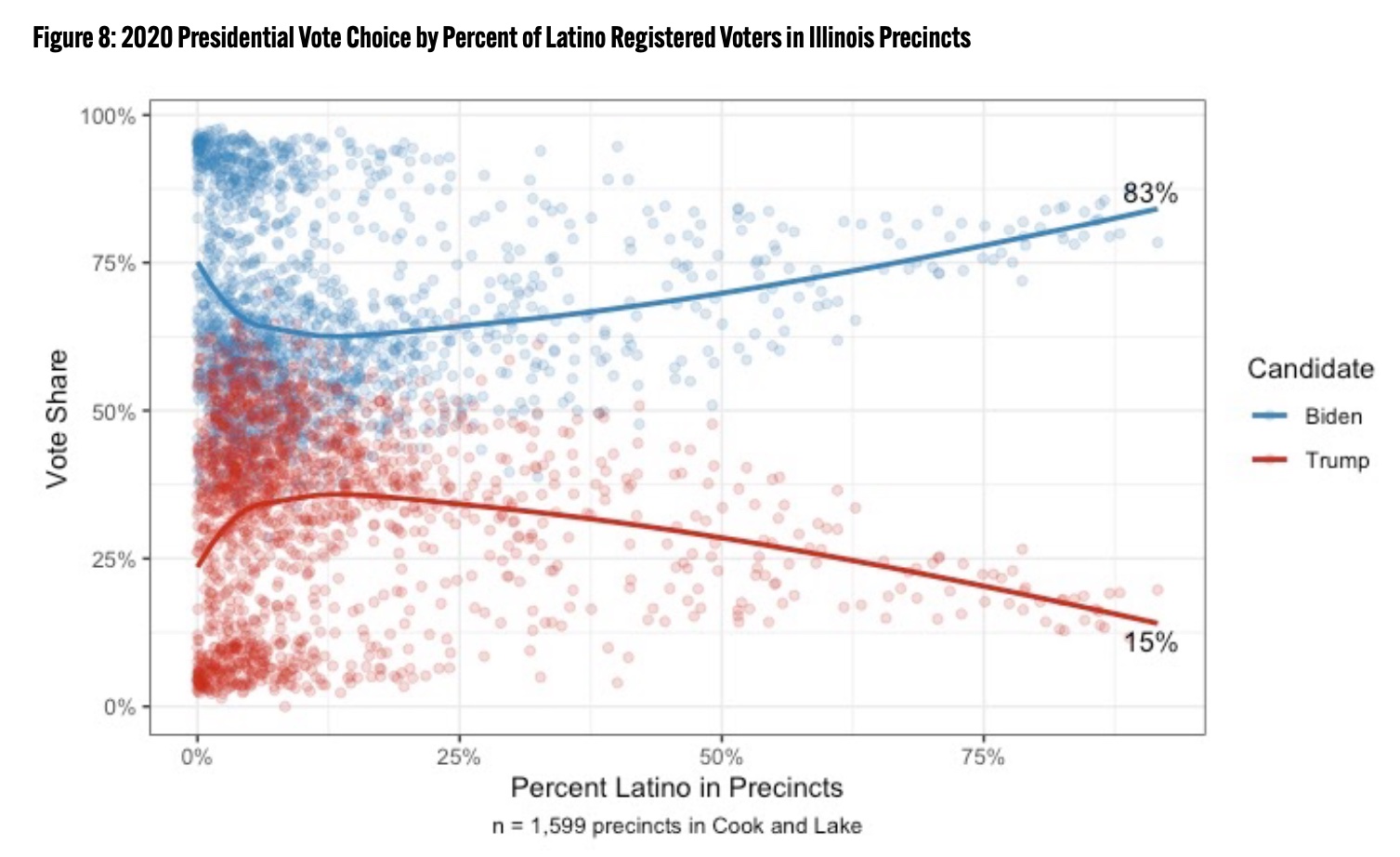 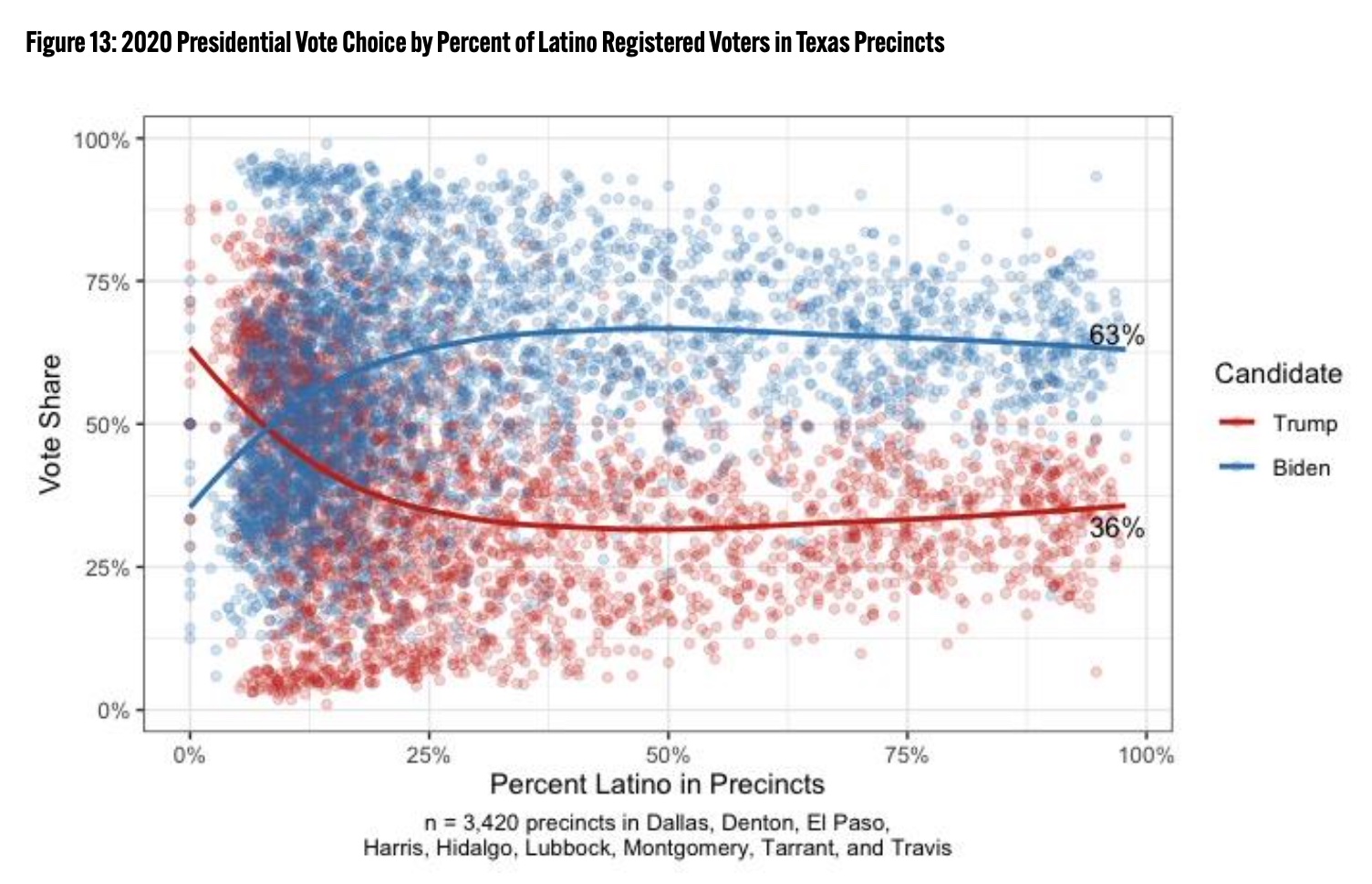 “As results for the presidential election started to pour in on November 3, 2020, the focus of the popular media on Latinos in Miami-Dade County created an incomplete narrative: Latinos delivered the state of Florida to the Republican candidate, Donald J. Trump. Exit polls with small Latino samples that showed a slight shift in Latino voter preference towards the Republican party relative to 2016 reinforced that narrative,” Diaz wrote in the UCLA LPPI executive summary. “After all, Miami-Dade represents only 3.1% of the overall U.S. Latino population and is not typical or representative of Latinos nationwide. An inaccurate and one-dimensional account of the vote choice and the impact of the second-largest ethno-racial voting bloc in the country emerged that night. But zooming out from Miami-Dade, the vote choice of Latino voters across the country paints a very different picture.”

“Rather than fixate on results in just one locale, we have taken a very comprehensive approach that incorporates Latino voters across 13 states and more than 27,000 individual precincts, which represents more than 40 million votes cast in these precincts,” Barreto said, noting that there has been a media fixation with Miami or south Texas and less of a holistic look at U.S. Latino voters in the 2020 election. Adding voting patterns in precincts from Arizona, California, New York, New Mexico, Wisconsin and other states, Barreto said, “made it more comprehensive and more representative.”

“We do not believe white voters in Vermont or West Virginia are somehow representative of all white voters, and we should understand Latino voters through a similar lens of diversity,” he said.

According to Diaz’s executive summary, such diversity can lead to more political power for Latinos.

“Latinos are youthful and diverse, and projected to make up 27.5% of the American population by 2060. This translates into immense political power as more of that population grows into the electorate,” Diaz wrote. “In November 2020, Arizona showed just what that power could result in when Latinos act as a concentrated voting bloc, clenching victory for Joe Biden and flipping their second Senate seat blue in just two years. Further, in states like Georgia, the small but growing Latino electorate was part of a large, Black-led multi-racial coalition that added to Democrats’ winning margins in both the 2020 presidential election as well as the two Senate runoffs.”

“Yet, Latinos are often left out of the conversation when it comes to shaping policy and are seen as an afterthought when it comes to elections. But as the challenges of 2020 showed us, elections have consequences and cost lives,” Diaz added.

Recently, the New York Times conducted an analysis of immigrant-majority precincts, saying that Trump increased support in these areas, particularly with Latinos. Such findings would contradict some of what the UCLA LPPI study found. According to Barreto, the Times analysis is not reflective of what actually happened with U.S. Latino voters during the 2020 election.

“The New York Times analysis misses the point of the larger historical context and ignores the changing denominator—for instance, that voter turnout went way up between 2016 and 2020,” Barreto said. “First, in terms of historical context, 2016 was a year in which Clinton did very well with immigrant and Latino voters. She was well-known and liked, and Trump portrayed himself as entirely anti-immigrant in 2016. So using 2016 as a mythical ‘baseline’ is completely misguided by the Times. When you look at longer trends over time in Latino and immigrant voting, the Democrats continue to make gains and win around a 2-to-1 margin, sometimes more, in immigrant communities. In 2020, Trump was able to get the entire Republican Party back in his camp, including people like Marco Rubio, who is well-known by Spanish-speaking voters, which helped him grow his support over 2016. But Trump in 2020 was still far below the high mark of 38%, which George W. Bush won with Latinos in 2004.”

“The Times analysis also mixes Latino, Asian, African and other immigrant communities, and continues the narrative that all Latinos are immigrants,” Barreto said. “Our [UCLA LPPI] analysis looks at Latino voters—whether they are newly naturalized citizens, newly arrived from the island of Puerto Rico or if their family has been in the U.S. for over 100 years. We are looking at the whole of the Latino electorate.”

The lack of understanding from the Times analysis is yet another example of why Barreto has urged political journalists and data experts to start “talking more about Latino ‘voters’ and not ‘the Latino vote.'”

“They need to report on Latino voters with the same nuance and complexity that political media give white voters. Give some time to take a more comprehensive and holistic approach. Don’t get distracted by one or two anecdotes that may or may not be representative of our community. The Latino vote is going to continue to grow and become a larger and larger share of the overall national electorate, and so coverage of the Latino voting community should continue to grow in importance,” Barreto said.

11 responses to “UCLA Study: A Record 16.6 Million US Latinos Voted in 2020 Election, Leading to Key State Victories for Biden-Harris”