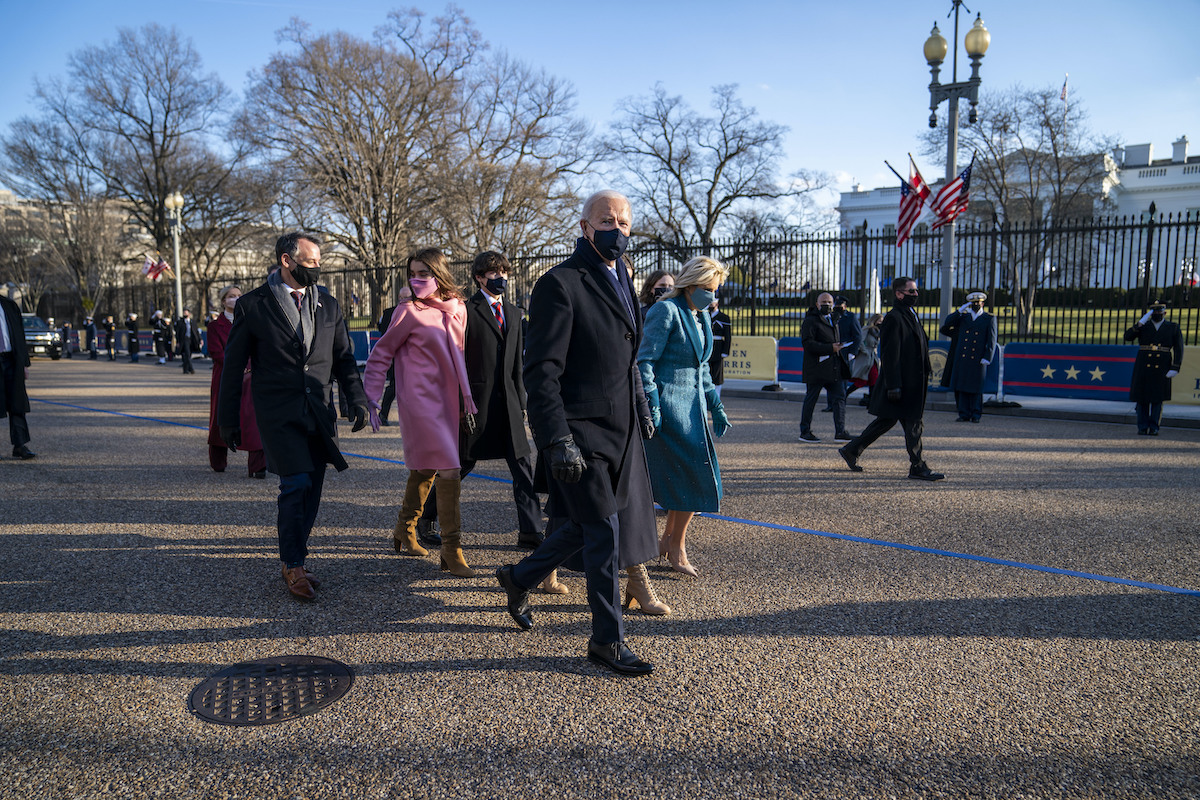 President Joe Biden and First Lady Dr. Jill Biden walk along Pennsylvania Avenue in front of the White House during Inaugural celebrations, Wednesday, January 20, 2021. President Biden was sworn in as as the 46th President of the United States. (Photo by Doug Mills/The New York Times)

SAN DIEGO (AP) — For the opening salvo of his presidency, few expected Joe Biden to be so far reaching on immigration.

A raft of executive orders issued Wednesday undoes many of his predecessor’s hallmark initiatives, such as halting work on a border wall with Mexico, lifting a travel ban on people from several predominantly Muslim countries and reversing plans to exclude people in the country illegally from the 2020 census.

Biden is also ordering his cabinet to work to preserve Deferred Action for Childhood Arrivals, a program known as DACA that has shielded hundreds of thousands of people who came to the U.S. as children from deportation since it was introduced in 2012. In addition, he is extending temporary legal status to Liberians who fled civil war and the Ebola outbreak to June 2022.

But that’s just the beginning. Biden’s most ambitious proposal, unveiled Wednesday, is an immigration bill that would give legal status and a path to citizenship to anyone in the United States before January 1 —an estimated 11 million people— and reduce the time that family members must wait outside the United States for green cards.

Taken together, Biden’s plans represent a sharp U-turn after four years of relentless strikes against immigration, captured most vividly by the separation of thousands of children from their parents under a “zero tolerance” policy on illegal border crossings. Former President Donald Trump’s administration also took hundreds of other steps to enhance enforcement, limit eligibility for asylum and cut legal immigration.

Biden’s package dispels any belief that his policies would resemble those of former President Barack Obama, who promised a sweeping bill his first year in office but waited five years while logging more than 2 million deportations.

Eager to avoid a rush on the border, Biden aides signaled that it will take time to unwind some of Trump’s border policies, which include making asylum-seekers wait in Mexico for hearings in U.S. immigration court.

It “will take months to be fully up and running in terms of being able to do the kind of asylum processing that we want to be able to do,” Jake Sullivan, Biden’s national security advisor, told reporters.

The administration has been mum on a 100-day moratorium on deportations that Biden promised, though he is revoking one of Trump’s earliest executive orders making anyone in the country illegally a priority for deportations. Susan Rice, head of the White House Domestic Policy Council, said any moratorium would come from the Homeland Security Department, not the president.

Despite the deliberative pace in some areas, Biden’s moves left pro-immigration advocates overjoyed. Greisa Martinez Rosas, executive director of United We Dream, called the legislation “the most progressive legalization bill in history.”

“We made it,” she said Wednesday on a conference call with reporters. “We made this day happen.”

It is even more striking because immigration got scarce mention during the campaign, and the issue has divided Republicans and Democrats, even within their own parties. Legislative efforts failed in 2007 and 2013.

More favorable attitudes toward immigration —especially among Democrats— may weigh in Biden’s favor. A Gallup survey last year found that 34% of those polled supported more immigration, up from 21% in 2016 and higher than any time since Gallup began asking the question in 1965.

Seven in 10 voters said they preferred offering immigrants in the U.S. illegally a chance to apply for legal status, compared with about 3 in 10 who thought they should be deported to the country they came from, according to AP VoteCast. The survey of more than 110,000 voters in November showed 9 in 10 Biden voters but just about half of Trump voters were in favor of a path to legal status.

Under the bill, most people would wait eight years for citizenship but those enrolled in DACA, those with temporary protective status for fleeing strife-torn countries and farmworkers would wait three years.

The proposal would let eligible family members wait in the United States for green cards by granting temporary status until their petitions are processed—a population that Kerri Talbot of advocacy group Immigration Hub estimates at 4 million.

The bill faces an enormous test in Congress. Sen. Bob Menendez, a New Jersey Democrat, said Wednesday that he would lead the Senate effort. Skeptics will note that Ronald Regan’s 1986 amnesty for nearly 3 million immigrants preceded large numbers of new arrivals and say to expect more of the same.

In a taste of what’s to come, Sen. Tom Cotton, an Arkansas Republican, described the bill as having “open borders: Total amnesty, no regard for the health and security of Americans, and zero enforcement.”

To be clear, enforcement has expanded exponentially since the mid-1990s and will remain. Biden’s bill calls for more technology at land crossings, airports and seaports and authorizes the Homeland Security secretary to consider other steps.

Biden warned advocates last week that they should not hold him to passage within 100 days, said Domingo Garcia of the League of United Latin American Citizens, who was on a call with the president.

“Today we celebrate,” Carlos Guevara of pro-immigration group UnidosUS said Wednesday. “Tomorrow we roll up our sleeves and get to work.”