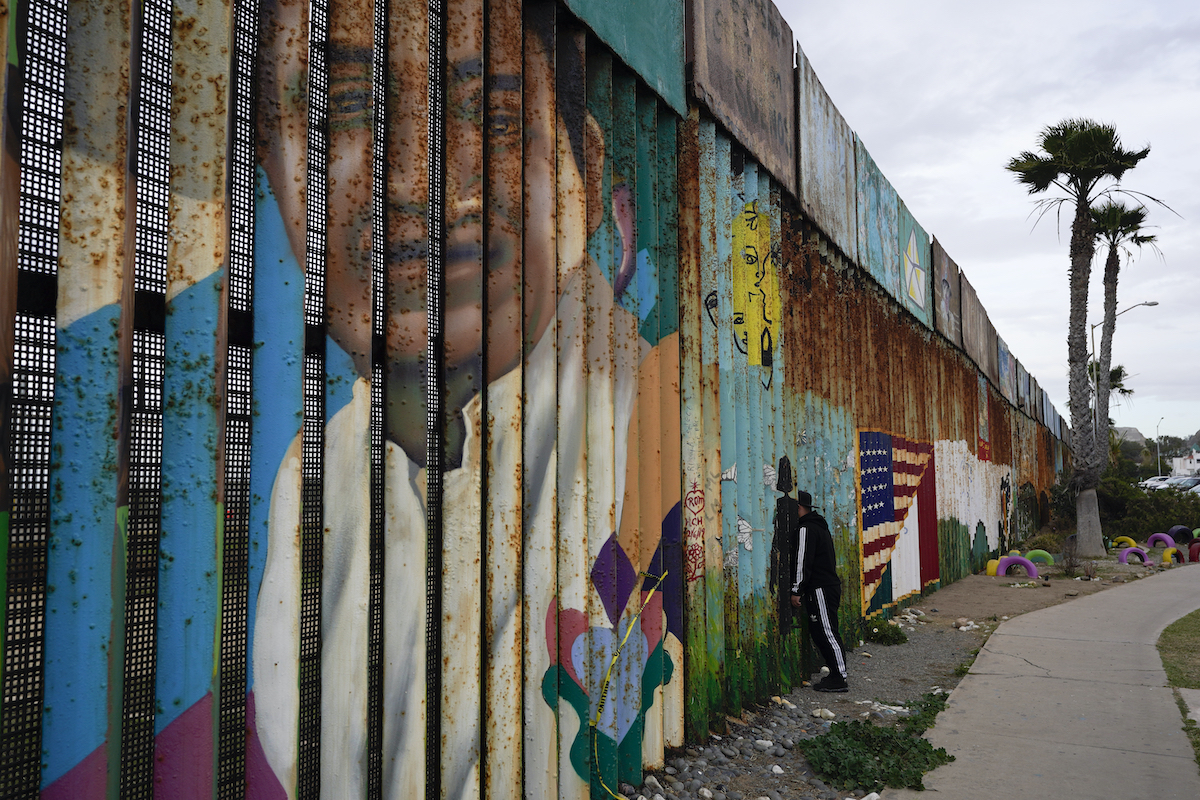 A man looks through the first wall at Friendship Park, near where the border separating Tijuana, Mexico, and San Diego meets the Pacific Ocean Tuesday, January 19, 2021, in Tijuana, Mexico. (AP Photo/Gregory Bull)

Biden on Wednesday ordered a “pause” on all wall construction within a week, one of 17 executive orders issued on his first day in office, including six dealing with immigration.

The order leaves billions of dollars of work unfinished —but still under contract— after Trump worked feverishly last year to build more than 450 miles (720 kilometers), a goal he said he achieved eight days before leaving office.

As of January 15, the government spent $6.1 billion of the $10.8 billion in work it signed contracts to have done, according to a Senate Democratic aide with knowledge of the contracts who spoke on condition of anonymity because details have not been made public. The full amount under contract would have extended Trump’s wall to 664 miles (1,069 kilometers).

Biden, seeking to fulfill a pledge not to build “another foot,” gave his administration two months to determine how much it would cost to cancel contracts and whether money could be spent elsewhere. The Senate aide said fees would be negotiated with contractors and the administration would seek to spend whatever’s left on related uses on the border, such as roads, lights, sensors and other technology.

Publicly, the Trump administration said it secured $15 billion for the wall. The Senate aide said it was actually $16.45 billion as of Wednesday, $5.8 billion of which was appropriated by Congress and the rest diverted from the Defense and Treasury departments.

The Trump administration notified the Senate aide on January 14 that it was moving ahead with a contract for $863 million, but it was not awarded.

The Army Corps of Engineers, which has awarded wall contracts with Defense Department money, said Thursday that it told crews not to install any additional barriers and to limit activity over the next few days to what is “necessary to safely prepare each site for a suspension of work.” 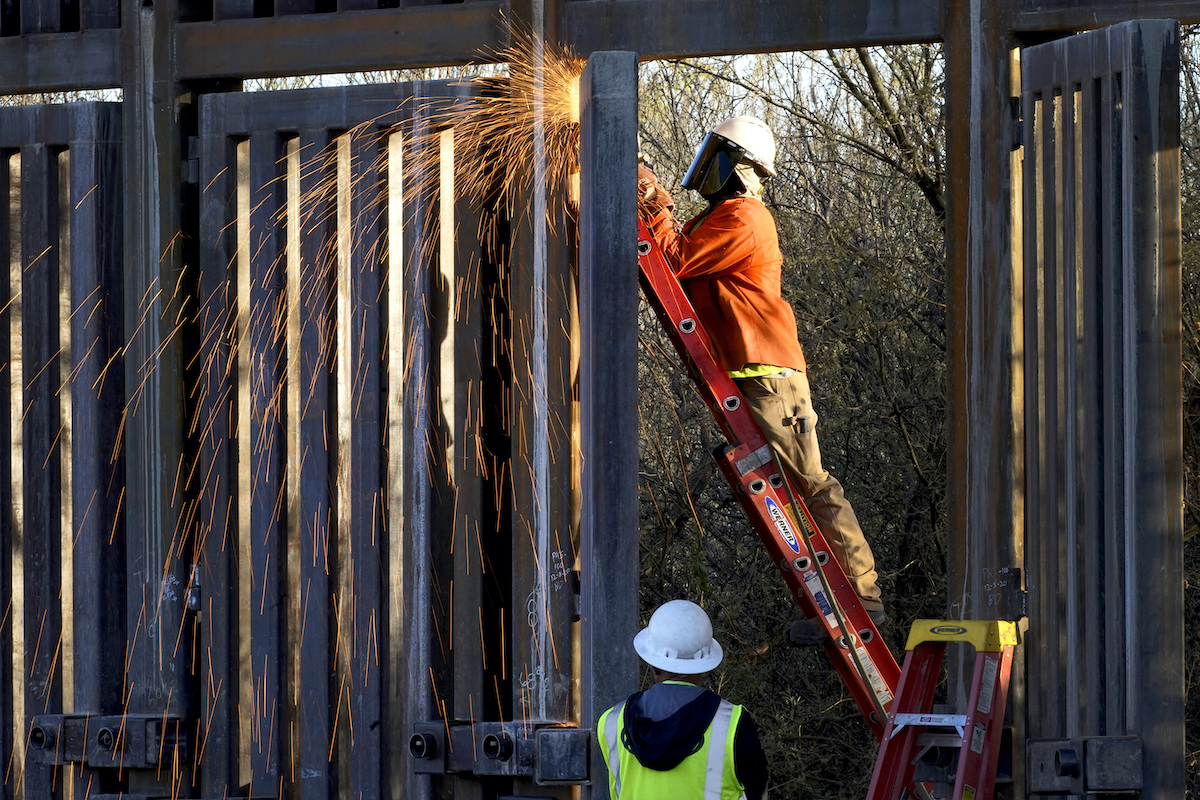 John Kurc, an activist who posts videos of dynamite blasts by wall construction crews, said he saw one dynamite charge being set Wednesday afternoon in Guadalupe Canyon in easternmost Arizona, even as the inauguration was playing out in Washington.

Heavy machines have been crawling over roadways gouged into rocky mountainsides, tapping open holes for posts on U.S. Bureau of Land Management property.

But in San Diego, crews were out replacing a steel fence with imposing, tightly spaced poles topped with flat steel plates rising 30 feet (9 meters), said Dan Watman of Friends of Friendship Park, a group that promotes public access to the cross-border park overlooking the Pacific Ocean.

Contractors began last week, said Watman, who was informed of the project in a December conference call with Border Patrol agents but got no explanation for it. The agency referred questions to the White House, which had no immediate comment.

Trump said the border wall would be “virtually impenetrable” and paid for by Mexico, which never happened. While the wall is much more formidable than the barriers it replaced, it isn’t uncommon for smugglers to guide people over or through it. Portions can be sawed with power tools sold at home improvement stores.

Despite Trump’s bravado, Border Patrol officials have said the wall was never meant to stop everyone but rather to slow their advance. 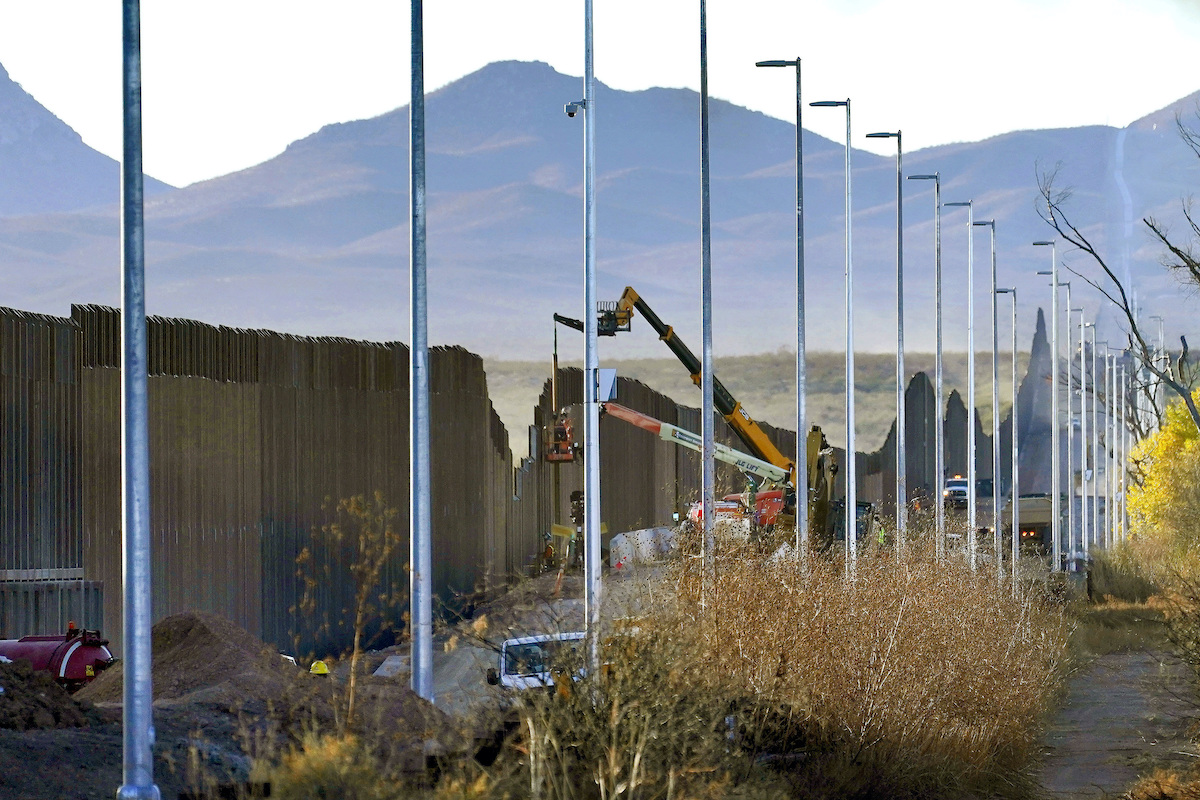 Jose Edgar Zuleta, whose business selling religious jewelry in the Mexican city of Puebla dried up during the coronavirus pandemic, cleared two walls in Friendship Park in October with a special ladder. He moved through brush in a heavily patrolled area for about half an hour before getting caught. His 21-year-old son, who went ahead of him, got picked up hours later.

The cross-border park has hosted yoga classes, concerts and countless news conferences, including one in 2018 with then-Attorney General Jeff Sessions to announce a “zero tolerance” policy that caused thousands of children to be separated from their parents at the border.

An old bullfighting ring and ocean-view restaurants surround the Mexican side; wetland scrub stretches into the United States.

Years ago, people passed baked goods, kissed and shook hands through a chain-link fence. Watman remembers passing tools back and forth in 2007 to plant a cross-border garden that still stands.

Since 2012, after construction of a double wall at the park, the Border Patrol has opened a gate many weekends for up to 10 people at a time to exchange words with those in Mexico.

The Supreme Court is scheduled to hear arguments next month on whether the government’ illegally diverted billions of dollars from the Defense Department to build the wall after Congress denied money that Trump sought, triggering a 35-day government shutdown in 2017.

It is unclear if Biden will adopt Trump’s position before the Supreme Court. The government’s brief is due February 11.