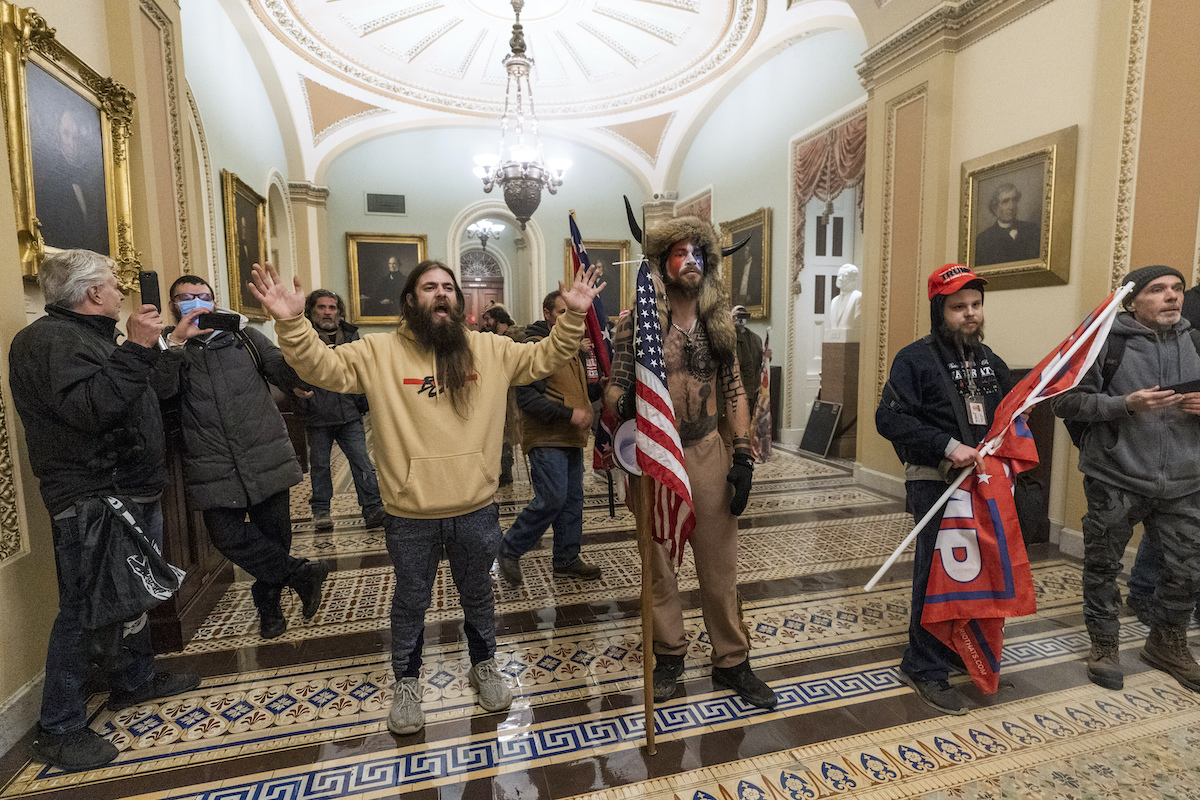 Supporters of President Donald Trump are confronted by Capitol Police officers outside the Senate Chamber inside the Capitol, Wednesday, January 6, 2021 in Washington. (AP Photo/Manuel Balce Ceneta)

In June of 2020, public support for Black Lives Matter and calls to end police brutality surged to an all-time high of 67 percent across all adult Americans, with white Americans sitting at around 60 percent.

By late August, that support from white America dropped from 60 percent to a mere 45 percent.

In translation, after everyone posted their “Black Square” on Instagram, they lost interest in social change and radically changed absolutely nothing.

For months following the murders of George Floyd and Breonna Taylor, Black and Brown organizers continued the push for defunding the police and abolition. Because for these communities, the violence of police brutality didn’t stop at the end of July.

For Black, Indigenous, and Latinx communities there is no such thing as going back to business as usual.

Fast forward to Election Day and it seems as though most of the country took a collective sigh of relief. The horror show was finally over; Trump’s reign was finally coming to an end.

After the final votes came out, over 74 million Americans still willingly voted for a demagogue, a sure sign that the fight against white supremacy isn’t even close to being over. Those same people could not fathom that communities of color showed up to the polls and voted this fascist-in-chief out of office, so they took to the Capitol claiming that the election was “stolen.”

And now that America has a new shiny president who isn’t threatening people on Twitter, communities of color are concerned that white America will lose interest in the fight for social change.

White supremacy will no longer be as obvious as an attack on our Capitol. Instead it will linger in the crevices of our society in the form of mass incarceration, underfunded city schools, and kids in cages still waiting to be reunited with their parents.

Racism will still exist in the form of white women accusing Black boys of stealing their phones.

Indigenous peoples will still be laying their bodies on the line to protect the water and land from being scarred by pipelines and corporate greed.

Trump won’t be around anymore, but his legacy of right-wing packed courts and a conservative Supreme Court bench will be ready to overturn Roe v. Wade if they get the chance.

Americans will still need to push for climate policies that not only stop the hemorrhaging of climate change but also reverse it, while prioritizing the environments of our most vulnerable communities.

And there will always be the next election to organize for.

White supremacy didn’t just disappear because one of the snake heads was cut off. It lives on in every single person who is willing to uphold white supremacy by any means necessary. It still lives on in the governors, senators, and other elected officials who will continue to pass legislation that disrupts and destroys the lives of communities living on the margins.

White America will need to stay committed to bringing justice and change beyond 2020. It’s that blissful ignorance and lack of accountability that landed our country into one of the most dangerous administrations in modern-day history.

Americans will need to continue to stand up for our most vulnerable communities and fight against white supremacy long after Trump has left the White House. The work isn’t done.

Daisy Prado is a public affairs and communications strategist with experience serving nonprofits, news outlets, and non-governmental organizations. She is also a graduate of the Walter Cronkite School of Journalism and Mass Communication and the Julie Ann Wrigley Global Institute of Sustainability. Twitter: @TheDaisyPrado.

One response to “Dear America, With Trump Gone, Are You Still Committed to Fighting White Supremacy? (OPINION)”