US Ends Deal With Arizona Restricting Biden on Immigration 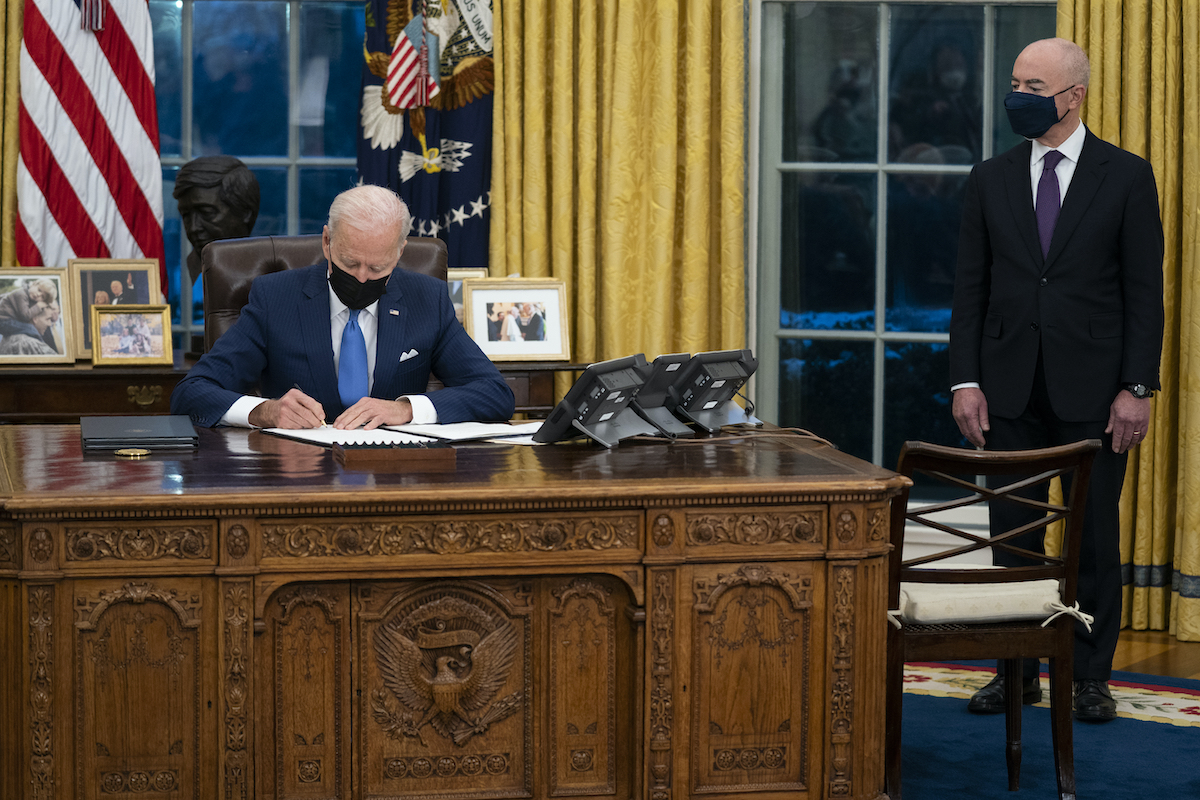 Secretary of Homeland Security Alejandro Mayorkas looks on as President Joe Biden signs an executive order on immigration, in the Oval Office of the White House, Tuesday, February 2, 2021, in Washington. (AP Photo/Evan Vucci)

PHOENIX (AP) — The U.S. Department of Homeland Security has terminated an unusual agreement that Arizona’s top prosecutor signed with the agency in the waning days of the Trump administration to try to restrict President Joe Biden’s ability to overhaul his predecessor’s immigration policies.

The agency’s action was revealed Wednesday as Arizona Attorney General Mark Brnovich, a Republican, sued to stop newly confirmed Homeland Security Secretary Alejandro Mayorkas from carrying out Biden’s 100-day moratorium on deportations. A federal judge in Texas has already put it on hold.

“Arizona’s law enforcement community is particularly concerned that aliens who have been charged or convicted of crimes will be released as a result of DHS’s 100-day moratorium,” Brnovich said in the federal lawsuit.

He said authorities also worry “that releasing individuals during the COVID-19 pandemic will further stress hospitals and social services at the local and county level.”

Brnovich sued after a court order last month temporarily barred the U.S. government from enforcing a pause in deportations. His filing revealed that Homeland Security canceled the immigration agreement he made with the agency, which was among at least nine quietly signed with state and local jurisdictions during the Trump administration’s final weeks.

The agreements say the jurisdictions are entitled to a 180-day consultation period before executive branch policy changes take effect.

It’s not clear what has happened with the agreements signed elsewhere. The Department of Homeland Security on Wednesday declined to comment, citing the pending litigation.

The Government Accountability Project said in a whistleblower complaint submitted Monday to Congress and two federal watchdogs that the labor agreements grant “extraordinary power and benefits” to the American Federation of Government Employees ICE Council 118, which represents about 7,500 employees and endorsed Trump in 2016 and 2020.

In addition to improved economic benefits, the agreements give the union the power to delay changes to immigration enforcement policies and practices, according to the letter the Government Accountability Project submitted on behalf of an undisclosed federal employee.

The agreements would remain in place for eight years unless Homeland Security moves to challenge them by February 17, which is 30 days after Cuccinelli signed them.

“This abuse of authority is shocking,” wrote David Seide, an attorney for the unidentified employee, noting Cuccinelli’s “extraordinary involvement.”

“It is clear that they are another example of the prior administration’s effort in its waning hours to cement a legacy at taxpayer expense,” he said.

Cuccinelli said in an email that he did nothing wrong.

“With the advice and counsel of the Office of the General Counsel, I executed appropriate agreements to finally address many of these previously unresolved issues,” he said. “As best I can tell, the primary basis for the complaint is that I did my job well, to the chagrin of the complainer.”

Biden’s Homeland Security leaders have not said whether they will move to annul the labor agreements.

The union official who signed them, Chris Crane, did not respond to requests for comment.