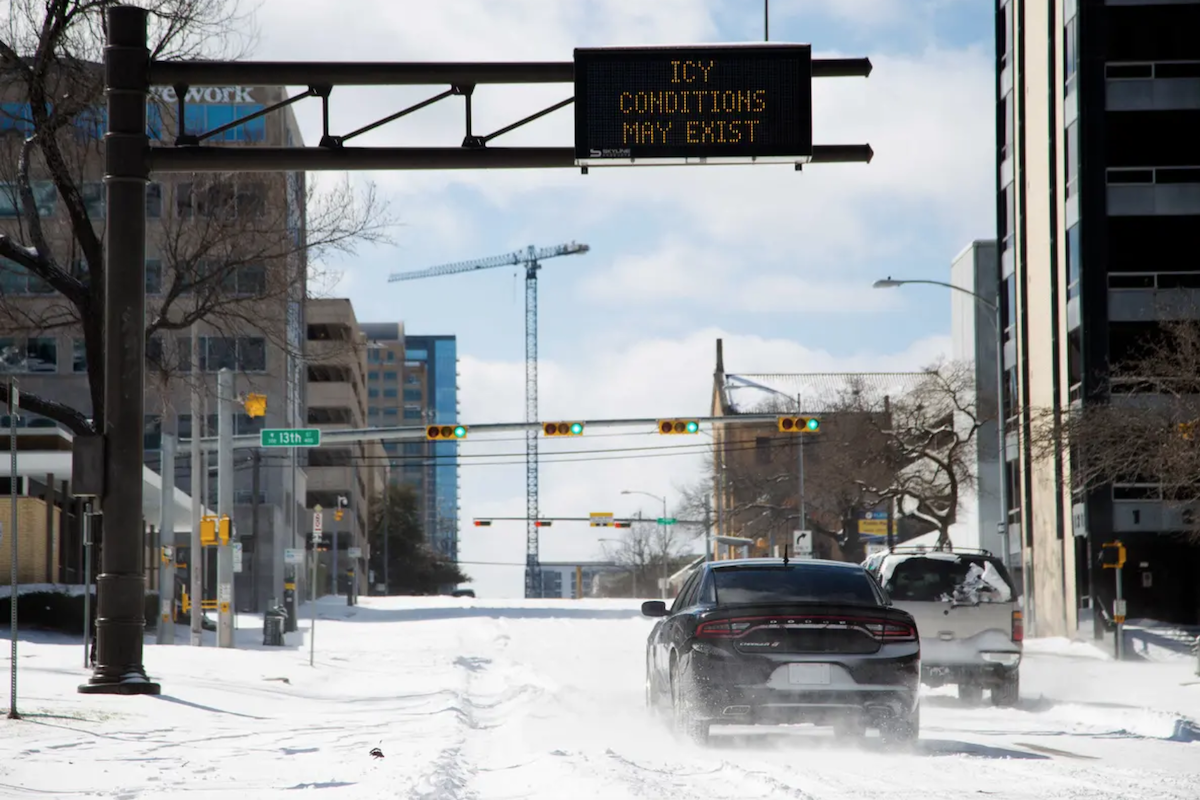 In this February 15, 2021 photo, vehicles attempt to drive uphill through snow and ice Monday on Guadalupe Street in Austin, Texas. A rare winter storm caused temperatures to plummet and covered a large part of the state in snow. (Credit: Evan L’Roy/The Texas Tribune)

Here’s what you need to know:

At least 10 people have died in weather-related incidents across the Houston area, the Houston Chronicle reported earlier today.

At least one of those incidents was related to a motor vehicle accident, while others were tied to extremely cold weather brought by a massive winter storm, fires and suspected carbon monoxide poisoning, according to authorities in the area.

Authorities also found two dead people who were homeless, and suspected the cause of death to be exposure to the cold temperatures, though autopsies will confirm the official causes of death. — Cassi Pollock

Texas Gas Service, which provides natural gas to Austin, El Paso, the Rio Grande Valley and other parts of the state, warned Tuesday of potential natural gas shortages during the winter storm.

In an email, the provider said it had very few outages by Tuesday morning but urged users to conserve gas to prevent future shortages. It asked people to lower their thermostats and water heater temperatures and to seal gaps in doorways and window frames with towels. The company also asked residents not to do laundry and to close blinds and curtains to keep in heat.

“As of this morning, our suppliers of natural gas are experiencing freezing gas wells due to the duration of the extreme cold. This is impacting the amount of gas they are able to provide to us,” the email explained.

“With below freezing temperatures forecast through the end of the week, we are planning for shortages and putting measures in place to keep gas service to our customers and critical facilities,” the provider said. — Jolie McCullough

ERCOT: Some customers should have power restored this afternoon

The Electric Reliability Council of Texas, which operates the state’s power grid, said Tuesday morning that the number of outages across the state remains high, but that it’s optimistic “that we will be able to reduce the number throughout the day.” Just after 9 a.m. Tuesday, the grid operator said on Twitter that additional wind, solar power and thermal power generators have indicated “that they expect to become available.”

“But, the amount we restore will depend on how much generation is actually able to come online,” ERCOT said.

The number of businesses and homes without power was reportedly around 4 million Tuesday morning. Temperatures across the state remained extremely low for Texas. It was in the teens in Houston and Austin and around 10 degrees in Dallas at around 9:45 a.m.

At around 11:30 a.m., ERCOT tweeted that power generation availability was improving in the state. In the previous hour, it said, it had directed local power providers to restore power to about 400,000 households. — Matthew Watkins

ERCOT has directed local utilities to restore 400,000 households in the last hour.

Texas House Speaker Dade Phelan has asked two committees in the lower chamber to hold a joint hearing later this month to review statewide power outages that have affected millions of Texas households during a massive winter storm.

On Monday, the state’s electric grid operator lost control of the power supply, leaving roughly 2 million Texas households without heat or other electric appliances. The operator, the Electric Reliability Council of Texas, began implementing rolling blackouts early Monday that were intended to last less than an hour per each impacted area. ERCOT ordered those blackouts after announcing a winter record for power demand.

“We must cut through the finger-pointing and hear directly from stakeholders about the factors that contributed to generation staying down at a time when families needed it most, what our state can do to correct these issues, and what steps regulators and grid operators are taking to safeguard our electric grid,” Phelan said in a news release.

Here’s how to help: