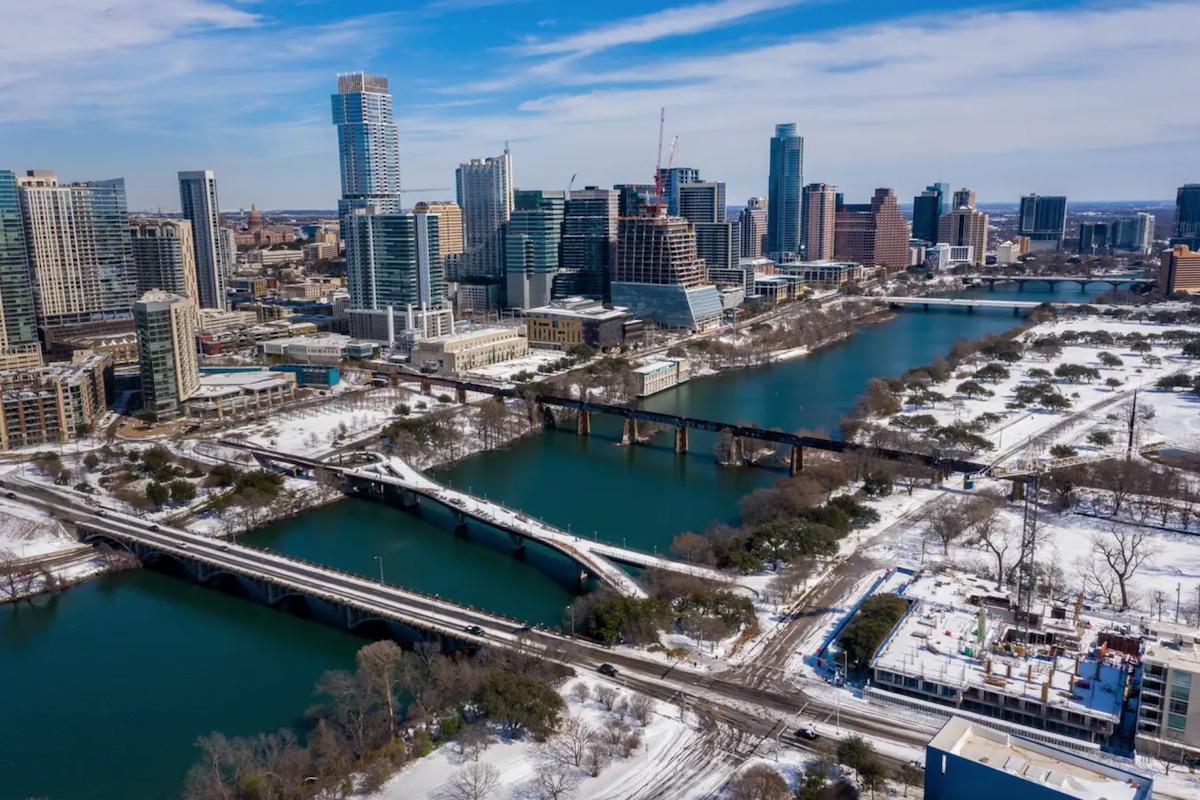 The Austin skyline remained snowy Tuesday as freezing temperatures continued across the state of Texas. (Credit: Jordan Vonderhaar for The Texas Tribune)

Here’s what you need to know:

About 36,000 Texans received doses of the COVID-19 vaccine between Sunday and Thursday, though most were administered on Valentine’s Day, before the winter storm intensified across a wide swath of the state, according to the Texas State Department of Health Services.

That’s a tiny fraction of what the state expected to administer before millions of homes, businesses and vaccine providers were crippled by power outages, water supply shortages and icy conditions. But the numbers are probably higher due to reporting lags, said Chris Van Deusen, DSHS spokesperson.

The deteriorating conditions across the state likely hampered not only vaccine efforts, but also reporting efforts, he said.

“This is probably an incomplete picture and more doses may be reported in the coming days as power is restored and providers get through emergency operations,” he said.

The winter storm stymied vaccination deliveries after the U.S. Centers for Disease Control and Prevention on Friday announced they’d be delaying shipments in advance of the storm, affecting some 750,000 doses allotted to Texas for this week. Last week, nearly 1 million doses were administered in a seven-day period, state health officials said.

Public health officials in Dallas, Houston, Austin and other cities postponed planned vaccination events or individual appointments until at least the end of the week, saying the injections would restart once travel conditions were less dangerous. — Karen Brooks Harper

Nearly Half of All Texans Facing Water Disruptions

Almost 14 million Texans are facing water disruptions as of Thursday morning, amounting to nearly half the people in the state. According to a Texas Commission on Environmental Quality spokesperson, 900 public water systems in 164 counties have been affected.

Some Texans have lost access to running water completely, and many cities are requiring residents to boil water before using it to drink, cook, or clean, including Houston, San Antonio, Austin, Fort Worth and more. — Neelam Bohra

Many colleges and universities across Texas have canceled classes for the rest of the week due to dangerous road conditions and inadequate internet access brought on by the widespread power outages.

Meanwhile, many universities are still providing meals and have opened warming centers in certain buildings for students who might not have electricity or heat. Texas State University is providing warming buses for students to use. As many cities issue boil water notices for residents, universities have also started to provide bottled water to students as available.

This morning, Texas A&M officials urged students to avoid doing laundry or taking showers, as power outages at water wells and water leaks have resulted in extremely low water levels across campus. As of this morning, the university had 30% of normal campus water levels. They also warned students to report any leaks as frozen pipes begin to thaw with warming temperatures. — Kate McGee

ERCOT Says Progress Being Made on Restoring Power

Progress is being made to restore power to the majority of millions of Texans whose electricity and heat were forced off by energy providers during the subfreezing temperatures this week, Texas’ energy grid operators said Thursday morning.

“We’re to the point in the load restoration where we are allowing transmission owners to bring back any load they can relate to this load shed event,” said Dan Woodfin with the Electric Reliability Council of Texas in a statement.

Those without power still, he said, are more likely to be affected by ice storm damage on power distribution systems, which need to be manually restarted after they were forced to shut down, and large power facilities that voluntarily went offline and haven’t again started dispersing energy.

Austin Energy reported Thursday morning that 13% of its energy customers were without power, compared to more than 40% Monday. Less than 2% of the Houston area was reportedly without power, which had seen about 60% of its homes and businesses without power during the storm.— Jolie McCullough

Texas’ unemployment agency is suspending its work search requirement through next week due to the winter weather, according to an announcement on its website.

Texans are typically required to prove that they are searching for work to receive unemployment benefits, but the requirement has been suspended for this week and next. The number of required work search activities varies by county, and the requirements include filling out job applications, participating in network events and taking skills assessments.

As millions of Texans continue struggling through a dayslong winter storm without power or potable water, Gov. Greg Abbott provided few details Wednesday on when they can expect their situations to improve.

As of Wednesday, 2.7 million households didn’t have power. And nearly 12 million Texans are facing water disruptions after enduring multiple days of freezing temperatures.

Texans running low on food are finding empty grocery store shelves. Food pantries are running out of supplies. And the freeze has wiped out substantial portions of the state’s citrus and vegetable crops. — Texas Tribune staff

Texas officials knew winter storms could leave the state’s power grid vulnerable, but they left the choice to prepare for harsh weather up to the power companies—many of which opted against the costly upgrades. That, plus a deregulated energy market largely isolated from the rest of the country’s power grid, left the state alone to deal with the crisis, experts said. 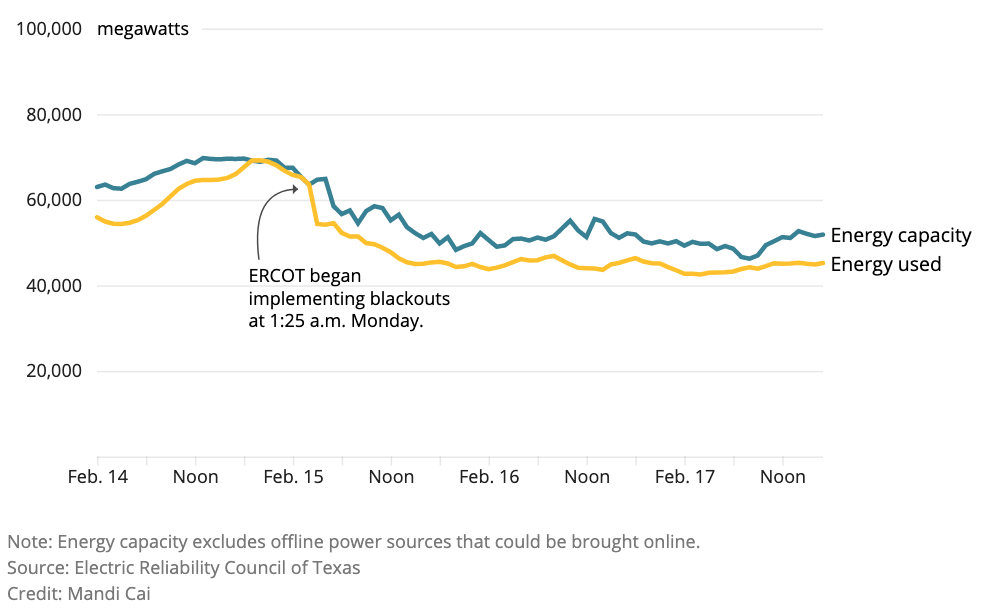 While Texas Republicans were quick to pounce on renewable energy and to blame frozen wind turbines, the natural gas, nuclear and coal plants that provide most of the state’s energy also struggled to operate during the storm.

Green energy has been a political punching bag for Texas Republicans like Gov. Greg Abbott throughout the winter storm. Experts say politicians never take responsibility for natural disasters when it comes to preparedness. — Texas Tribune staff

Hospitals in Austin Are Running Out of Water, Forcing Some to Transfer Patients

Seton hospitals in the area are also facing water problems. A spokesperson for Ascension Seton said in a statement that “extreme weather conditions have caused intermittent water issues at several Ascension Seton” facilities.

In a letter obtained by KUT, patients and families at Dell Children’s are being asked to not take showers and to use hand sanitizer to clean their hands. They were also told the toilets can’t flush, and staff members are changing linens only as needed. — Ashley Lopez, KUT

Disclosure: Ascension Seton has been a financial supporter of The Texas Tribune, a nonprofit, nonpartisan news organization that is funded in part by donations from members, foundations and corporate sponsors. Financial supporters play no role in the Tribune’s journalism. Find a complete list of them here.