Shutting Down Private-Run Immigration Detention Centers Is Complicated, But It Can Be Done (OPINION) 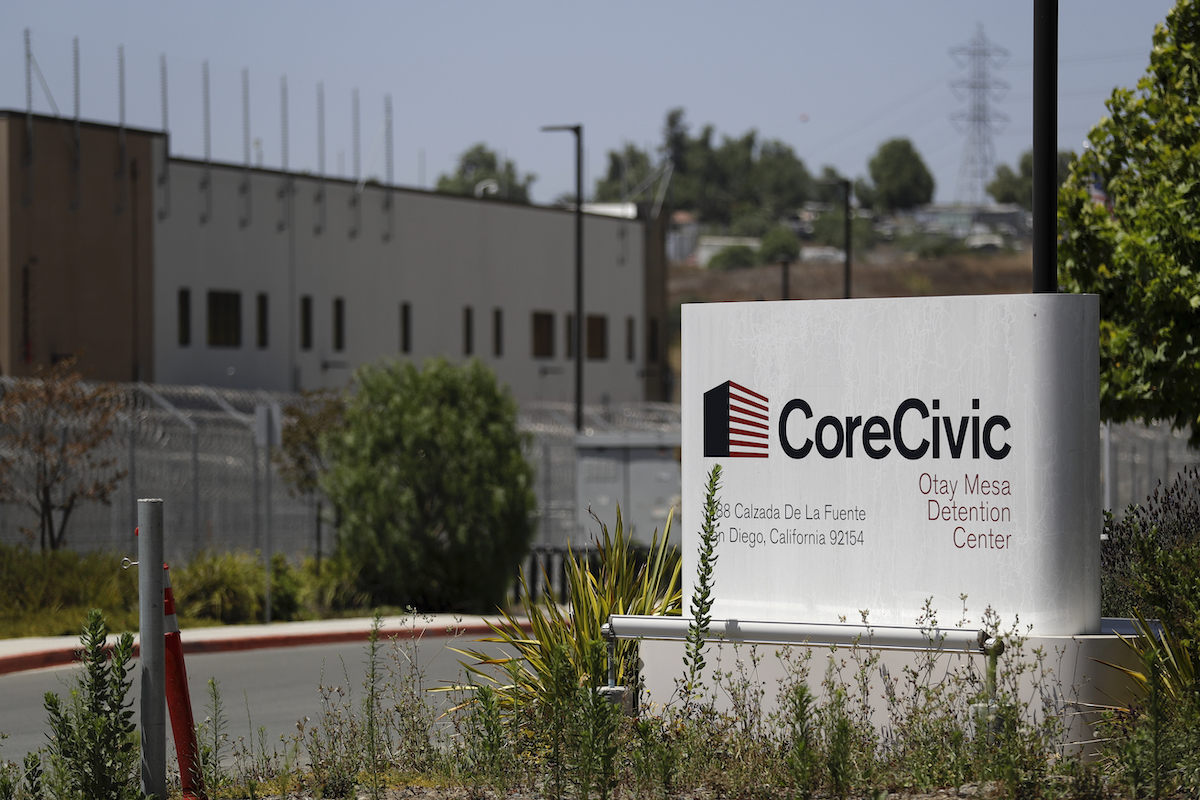 A sign for the Otay Mesa Detention Center sits in front of the building Tuesday, July 7, 2020, in San Diego. (AP Photo/Gregory Bull)

By Monica Reyes and Katherine Randall

Last week, lawmakers introduced the U.S. Citizenship Act of 2021 to Congress that —among other major changes— allows people seeking asylum who were forced to remain in Mexico through Trump’s “Remain in Mexico” policy to now enter the U.S. while their asylum cases resolve.

One particular but unclear part of this plan is that immigrants who have an asylum claim won’t be detained in detention if they don’t pose a security threat. About 500,00 immigrants, most of which are seeking asylum, go through privatized detention centers each year. These privatized facilities comprise 81% of all U.S. detention centers and are operated by the same big names running government-contracted private prisons in the U.S. like Geo Group and Management & Training Corporation.

Despite their problems, these private detention centers are a boon to the poverty-stricken rural areas wherein they commonly operate because they generate billions of dollars for local economies. When these facilities shut down due to health and safety violations, local communities often face devastating economic loss in already impoverished settings. In fact, one desperate, rural south-Texas community reopened the infamous “Ritmo” private prison in 2018 that inmates had burned down in protest of health and safety violations. When “Ritmo” closed down in 2015, 400 employees lost their jobs, spurring even more localized economic fallout and another 300 job losses. The facility is now solely used for migrant detainees because the business of immigration detention provides much-needed jobs for locals.

Whereas detention facilities rely on imprisoning immigrants, community-based alternatives offer holistic care. Established community nonprofit groups may offer housing and meals, but they also require professionals from the local community to offer social services and individualized case management, which helps immigrants understand their rights and comply with government requirements. Community-based alternatives employ cooks, social workers, counselors, teachers, lawyers, childcare workers, translators, and healthcare providers, among others. What’s more, when immigrants are in community settings instead of detention, they are more likely to find jobs and less likely to need government financial assistance if they are granted asylum.

The funding to develop community-based models comes at a fraction of the cost of privatized detention. Each year, immigrant detention centers contracted through private facilities cost the federal government over $2 billion, which is 80% more expensive than community-based approaches. Currently, the federal government pays privatized detention facilities large stipends to operate the same as prisons, covering costs like incarceration and surveillance. In 2015, Immigration and Customs Enforcement (ICE) overspent its detention budget by $129 million. Keeping immigrants out of detention requires less money for housing and full-time supervision. It can save the federal government over a billion and a half dollars each year.

To be sure, some may argue that immigration detention is necessary because immigrants must be detained to guarantee they attend court hearings. In actuality, the vast majority of immigrants who are in detention have no criminal record. It is their international right to ask for asylum at the U.S. border and detainment has become part of the asylum-seeking process. And because community-based alternatives allow for better access to case management and legal services, immigrants in alternative programs are more likely to understand their legal obligations, which leads to increases at a court appearance. In fact, 83 percent of immigrants who are not detained attend all of their court appointments, and if they have legal counsel, the rate increases to 96 percent.

While making a broad change such as eliminating privatized immigration detention will take time, Congress can begin by banning immigration detention policies that incarcerate innocent people and switch to community-based alternatives. Doing so will halt unjust detainment practices for thousands of people and continue to send billions to rural areas—essentially eliminating any excuse to take action on this now.

Monica Reyes is an Assistant Professor in the Writing, Rhetoric & Discourse Department at DePaul University and is a Public Voices Fellow through The OpEd Project.

Katherine Randall is a Ph.D. Candidate in the Rhetoric and Writing program at Virginia Tech, and a volunteer with the Blacksburg Refugee Partnership.