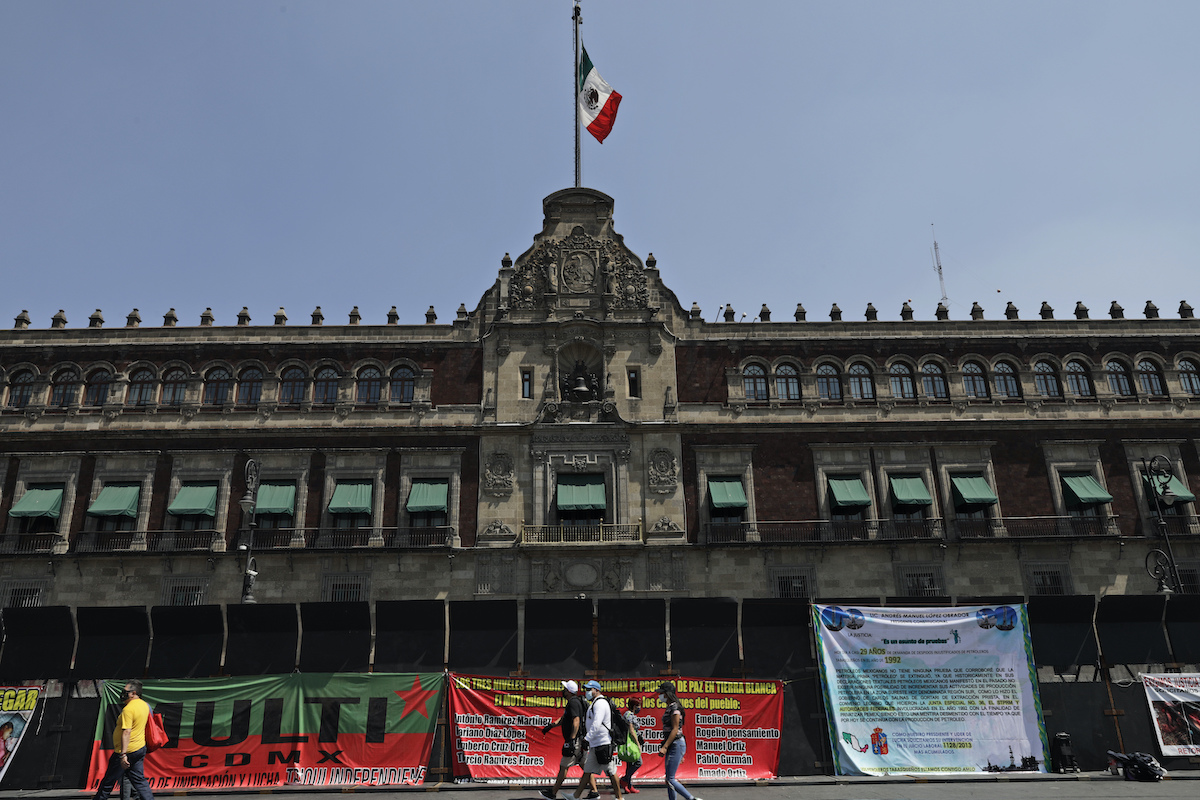 People walk past at a perimeter fence in front of the National Palace prior to upcoming International Women’s Day demonstrations, in Mexico City, Friday, March 5, 2020. (AP Photo/Eduardo Verdugo)

MEXICO CITY (AP) — Mexico’s President Andrés Manuel López Obrador tried to focus attention Monday on the high number of women in his cabinet, and not on the fact he has refused to break with a governorship candidate accused of rape.

Women’s Day marches Monday are focusing the spotlight on López Obrador’s contradictions. A progressive who says “the poor come first,” the president is also a social conservative, who leaves abortion largely to state legislation and says the family is the center of society.

Those contradictions were on display in Mexico City’s vast central plaza, after the government erected steel anti-riot barricades in front of the National Palace, while activists quickly adorned the structures with flowers and the names of female murder victims.

The National Palace in Mexico City, surrounded by protective barriers amidst protests. Now covered with the names of all murdered women. #NiUnaMenos pic.twitter.com/D92CLj3Td2

“Half of the cabinet are women,” López Obrador said at his daily morning news conference. “That was never seen before in Mexico.” Nevertheless, old habits die hard; during the same news conference, the president referred to one female reporter as “corazón,” roughly “sweetheart.”

Last week, the president sought to deflect criticism of his support for party’s candidate for the governorship of the southern state of Guerrero, Felix Salgado, who has been accused of rape by two women, though he has not been charged. López Obrador said the issue should be left up to voters in the southern state of Guerrero, and claims it is being brought up by his foes, “the conservatives.”

“All of a sudden, the conservatives are disguising themselves as feminists, very strange. Why? Because they see it as an opportunity to attack us,” the president said.

Monday’s protests focused on the barricades erected in fronts of the colonial-era National Palace where López Obrador lives and works. López Obrador himself once led protests in the same plaza. The president said it was to prevent attacks with incendiary devices on the historic palace, something which occurred at a women’s march last year.

“The barricades were put up because the conservatives are very upset,” López Obrador said. “They infiltrate all the movements to create provocations … they were planning to vandalize the National Palace.”

The president said two women had been found with gasoline bombs at a workshop in an upscale Mexico City neighborhood, noting “I am sure … they were put up to this.”

Salgado has not been charged because prosecutors claimed the statute of limitations ran out on one of the accusations, while another accusation remains under investigation. His lawyer has denied the accusations.

López Obrador’s Morena party has scheduled a re-run of an internal poll to see whether Salgado should remain as the candidate, and a group of female Morena legislators publicly called on him to resign.

Authorities estimate there will almost 100 women’s marches, in cities and towns throughout Mexico. Some local and state authorities designated squads of female officers to provide security at the marches.