Dear President López Obrador: ‘In Mexico, More Is Done to Protect the Palacio Nacional Than to Protect Women From Femicide and Rape’ 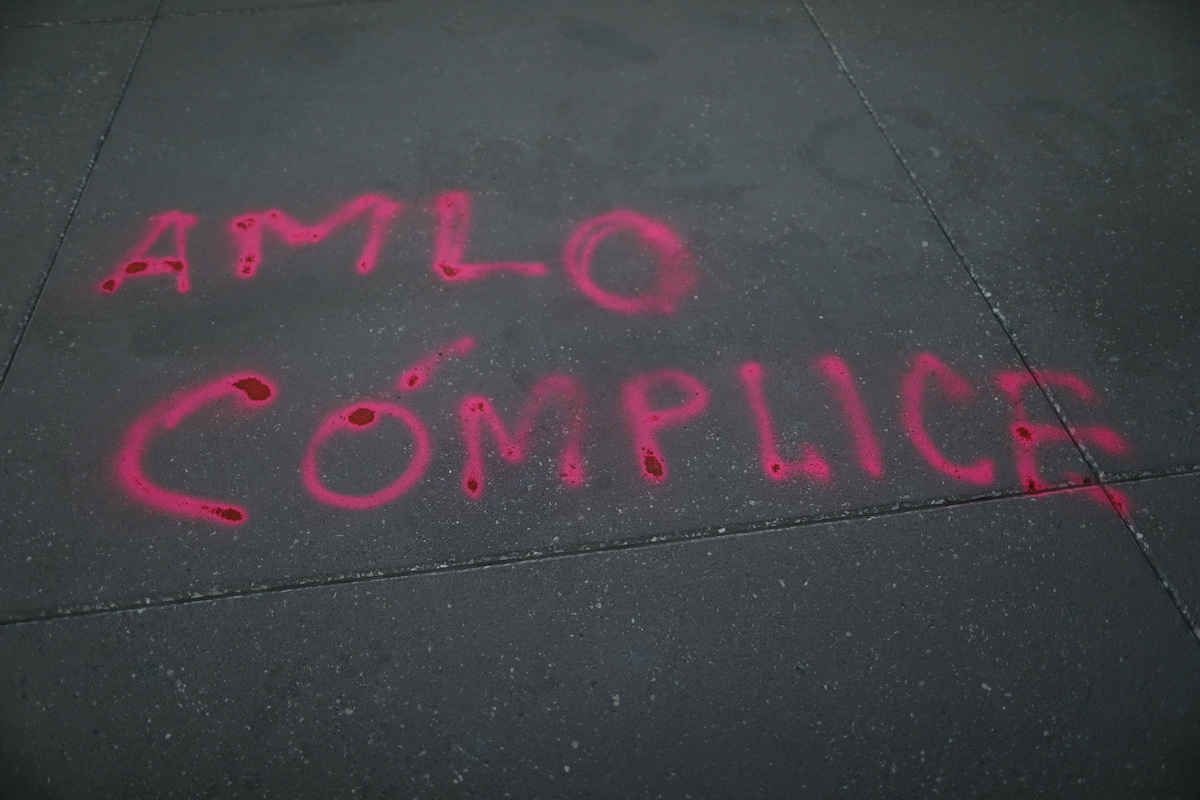 In this February 15, 2021 file photo, the Spanish graffiti message “AMLO is complicit” is written on the ground outside the National Palace in Mexico City. (AP Photo/Rebecca Blackwell, File)

Editor’s Note: On Monday morning, Futuro Media, which produces Latino Rebels, was sent the following open letter to Mexico president Andrés López Obrador. The letter was written by a collective of Mexican women, demanding that López Obrador put a stop to the country’s increase in gender-based violence. A Spanish version of this letter was published in El País. According to El País, more than 2,500 women from Mexico signed the letter, including Natalia Lafourcade, Julieta Venegas, Alondra de la Parra, Martha Tagle, Gabriela Warkentin, Marcelina Bautista, Yásnaya Elena A. Gil and Carmen Boullosa.

In Mexico, more is done to protect the Palacio Nacional than to protect women from femicide and rape. In Mexico, a woman who has an abortion is more likely to go to jail than a political candidate who has committed rape. We demand a national security strategy focused on gender to put an end to femicides, strengthen the institutions that deal with the gender-based violence this pandemic has exacerbated, and laws that guarantee our human rights. We also demand that you break the patriarchal pact which has led you to defend Félix Salgado Macedonio, a man accused of rape, and to endorse his campaign for Governor of the State of Morelos.

We demand that you recognize the pressing needs of diverse feminisms: mothers of daughters who were victims of femicide, Indigenous women, migrant women, Afro- Mexican women, disabled women, trans* women, muxes, sex workers, domestic workers, women deprived of liberty, women of advanced age, young women, women working in all different fields and environments. The feminist movement is not a political party, it has no head or leader, it is a collective voice. This March 8, International Women’s Day, we won’t all be able to take to the streets like we did last year, but we’re here to raise our collective voice.

We live in a country where 11 women and girls are murdered every day. Where 97% of femicides are never brought to justice. Where every 4 minutes, a woman is raped. Where most women deprived of liberty have been incarcerated for a crime committed by a man, or for defending themselves or their loved ones against aggression. Where women receive harsher sentences for the same crimes as their male counterparts and are deprived of their liberty for up to six years longer. Where 59% of Indigenous women have experienced violence. Where, as a result of transphobia, the average life expectancy of a trans* woman is 35. The system of colonial oppression continues to perpetrate violence against Indigenous women to this day. More than half the women in Mexico have suffered violence at the hands of their partner. Women with disabilities do not even appear in these reports, which is another form of violence. Mexico has one of the biggest pay gaps between women and men among the 37 member countries of the OECD: a woman needs to work almost 15 months to earn what a man makes in just 12. Millions of women have lost their jobs during the pandemic.

Behind these statistics are all of us: mothers, daughters, sisters, friends, neighbors, colleagues. We are our stories. We are the people we love, the music we listen to, our favorite foods, the fields we work in, the art we make, the businesses we start, the sports we play. We’re tired of the different forms of violence to which we are subjected, from sexist jokes to femicide. We demand an end to your disdain; we’re tired of being written off by you, President López Obrador. We are not a political party, we’re a collective voice.