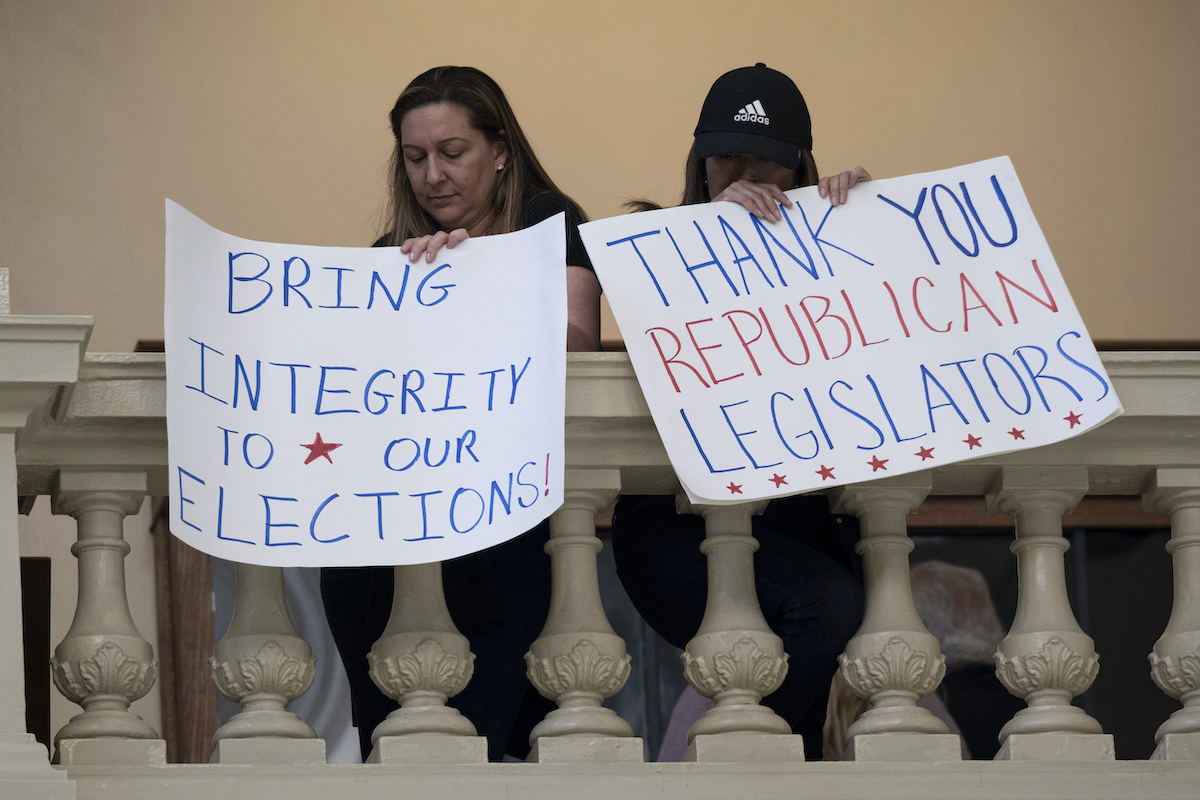 Editor’s Note: An original version of this opinion piece was published by the AZ Mirror on March 3.

PHOENIX — The domestic terrorist attack on the U.S. Capitol by supporters of former President Trump is still making headlines, and rightly so.

Congress is continuing its fact-finding efforts and a special 9-11 style commission will be formed to get to the bottom of how and why it happened, and how to keep it from happening again.

But let’s not forget what inspired the events of January 6: the false claim by Trump and others that Democrats stole the 2020 presidential election and a years-long organized push by the Republican Party to restrict or outright suppress the right to vote of anyone who isn’t marching lockstep with the GOP’s increasingly anti-democratic agenda.

It’s stunning to have to say this, but we are now living in an era —for the first time in American history— when one of our nation’s two major political parties has concluded that winning at all costs is more important than protecting our cherished right to hold free and fair elections.

In fact, since the attack on the Capitol, a coup attempt meant to block the count and certification of the electoral votes, the Republicans’ efforts to limit voting rights have shifted into high gear.

It’s not hard to guess who’s filing the bills designed to restrict access to the ballot box? Yep, it’s the GOP.

As the Brennan Center explains on its website, “In response to former President Trump’s continued lies about voter fraud, legislators across the country are aggressively attempting to limit voting access and roll back the gains of an election conducted during a deadly pandemic. These proposed bills will make it harder to vote, target voters of color, and take aim at the very election changes —such as mail voting— that made the 2020 election not only successful but possible.” (Keep in mind that, without voting by mail, untold thousands more Americans could have been killed by COVID-19.)

Granted, the Brennan Center is an unabashedly left-leaning organization. But you don’t have to take it from them. Consider what a lawyer for the Arizona Republican Party told the U.S. Supreme Court earlier this month.

During oral arguments in a case in which Arizona Republicans are fighting to keep in place two existing voting restrictions, attorney Michael Carvin readily admitted why Republicans oppose lifting the rules.

“It puts us at a competitive disadvantage relative to Democrats,” Carvin told Supreme Court Justice and Trump appointee Amy Coney Barrett. “Politics is a zero-sum game. Every extra vote that they get through unlawful interpretations of Section 2 (of the Voting Rights Act) hurts us. It’s the difference between winning an election 50-49 and losing an election.”

Well, at least Carvin was honest.

Heaven forbid that legally registered voters in a democracy would be allowed to have their votes counted.

Hey, I have a crazy idea: What if we did everything we could to make it easier instead of harder for anyone who is legally registered to vote to actually vote?

And voters in Arizona —where 19 anti-voter bills have been filed in this legislative session alone— aren’t the only ones being targeted by the Republican Party’s new Jim Crow laws.

Yes, Jim Crow, which, back in the day, included local and state statutes and other arbitrary rules that kept mainly Black people from enjoying their rights to full and participatory citizenship. Not as well known are how variations on Jim Crow, at least until the passage of the 1965 Voting Rights Act, also fueled discriminatory practices against other communities of color, such as segregated schools for whites and Latinos in California, Arizona and elsewhere across the nation.

Notably, four witnesses told Congress in 1986 that one-time Arizonan William H. Rehnquist, who would eventually go on to serve as Chief Justice of the U.S. Supreme Court, was part of a Republican campaign in 1962, as one witness described it, that was “designed to reduce the number of Black and Hispanic voters by confrontation and intimidation.”

Rehnquist was the same guy who once wrote: “I realize that it is an unpopular and unhumanitarian position, for which I have been excoriated by ‘liberal’ colleagues, but I think Plessy v. Ferguson was right and should be reaffirmed.” Plessy v. Ferguson was an 1896 Supreme Court ruling that sanctioned racial segregation in public facilities in the U.S. and codified Jim Crow, our version of apartheid.

The correct response to the GOP’s national frenzy of voter restrictions is the passage of the For the People Act and the John R. Lewis Voting Rights Act, federal bills that would push back hard against the Republicans’ war on voters. The For the People Act passed in the House last week. Lewis, who died of cancer in 2020, lived long enough to see the House pass the new Voting Rights Act in 2019, which was renamed in his honor last summer.

Congress should pass these important election reforms and President Biden should sign them before the GOP does more damage to our election system.

So far, the bill’s sponsors have strong Democratic backing, but Republicans, not surprisingly, are roundly opposed to the passage of both bills.