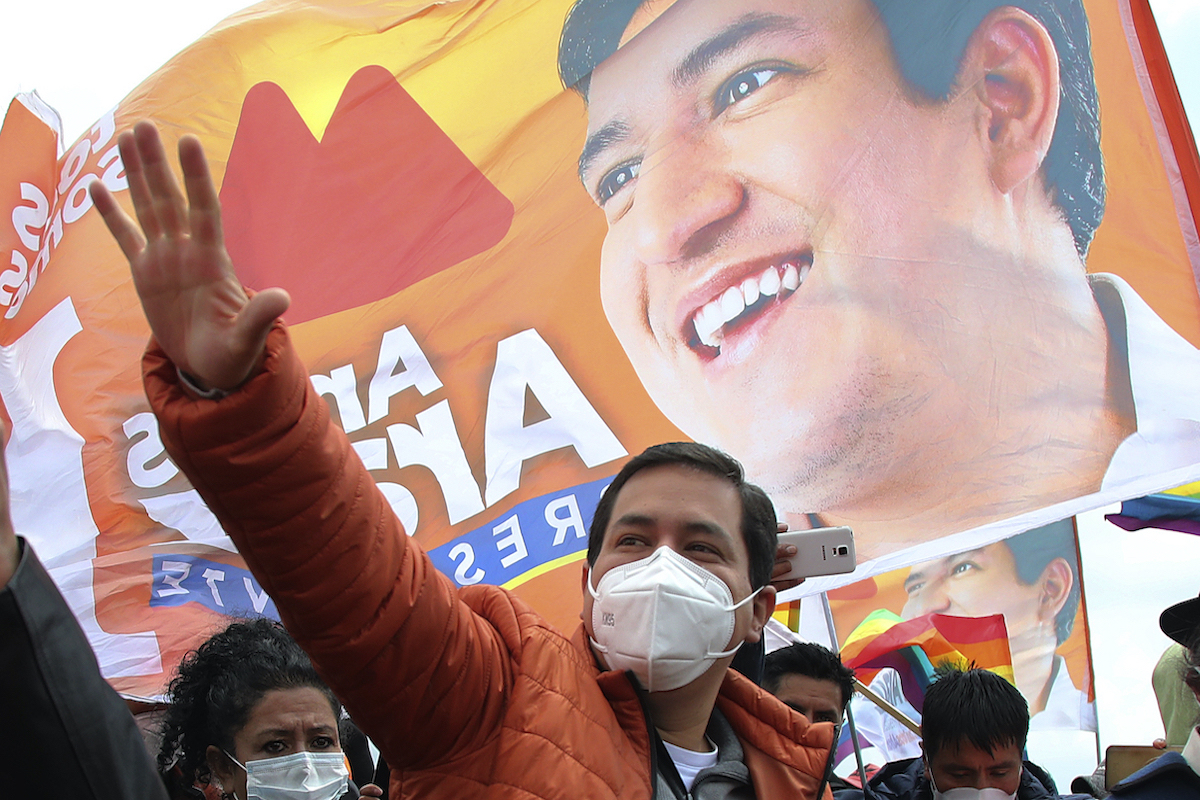 LIMA, Peru (AP) — A surging coronavirus pandemic that has brought on new lockdown measures and exacerbated fatigue in Ecuador and Peru has left many voters generally indifferent to the names they will see on the ballots Sunday, when the neighboring South American nations are set to choose new presidents.

No candidate in each nation has garnered enough support to be a clear favorite, and after a year of collective suffering and corruption scandals, voters seem to be hoping for a winner who can pull them out of the pandemic’s economic mess with the least stumbles possible.

Ecuadoreans face a runoff between conservative businessman Guillermo Lasso and Andrés Arauz, a disciple of former leftist President Rafael Correa. The winner will succeed President Lenín Moreno—a former Correa ally who turned against him while in office and who is not seeking reelection. 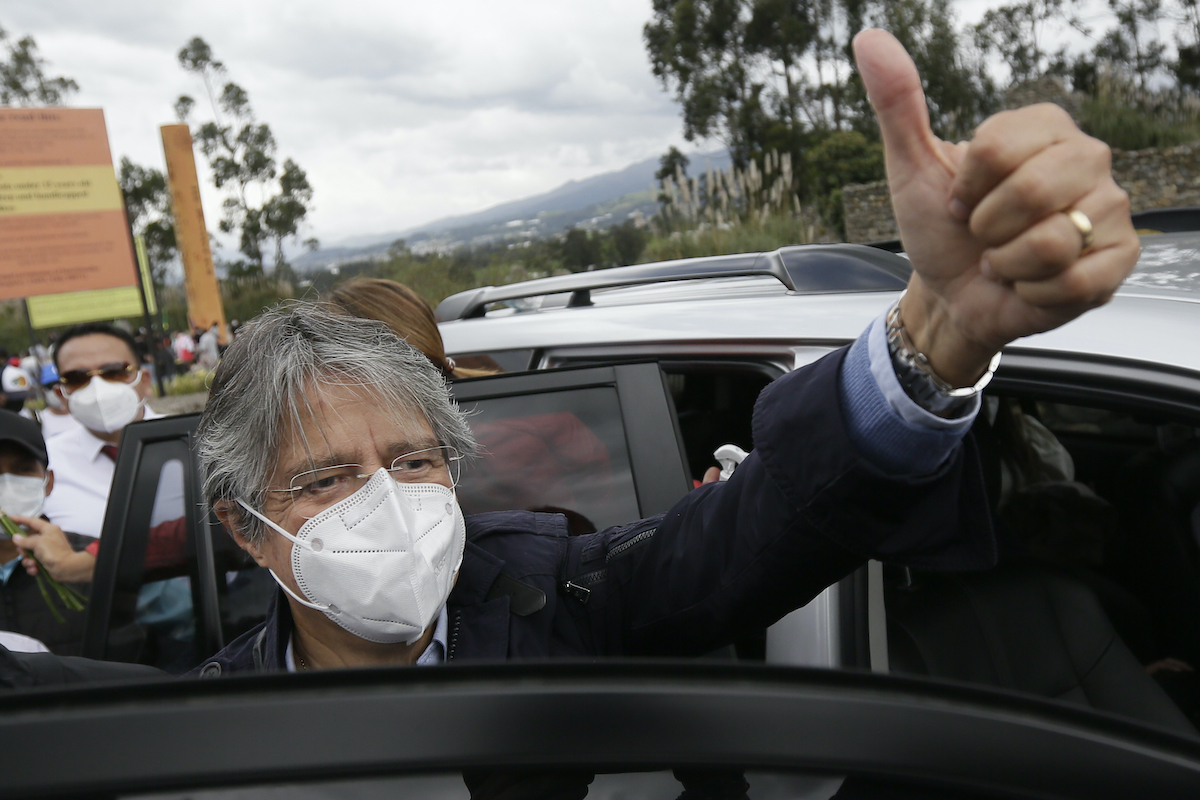 Peruvians, meanwhile, face a tangled field of 18 candidates following years of political turmoil that have seen a series of presidents and even the whole congress itself ousted over corruption scandals. A runoff in June is virtually assured. All seats in congress, too, are being contested.

The country is among those hardest hit by COVID-19, with more than 1.5 million confirmed cases and over 53,400 deaths.

“There is no work, there are no opportunities in the countryside, so we migrate to the city and many people are already in the city,” said Hernaldo Carbajal, who came from Peru’s hinterlands to seek work in Lima, the country’s capital. “In my opinion, may the best man for peasants and provincials win.”

Amid the pandemic, Peru faced political chaos in November, when it cycled through three presidents in a week after one was impeached by Congress over corruption allegations and protests forced his successor to resign.

Ecuador meanwhile saw an Indigenous uprising in October 2019 that paralyzed the country for several days and forced the government to back down on a move to end fuel subsidies.

The pandemic paralyzed 70% of businesses in Ecuador last year and brought the country’s unemployment rate to almost 68%. The country already had been in an economic slowdown that began in 2015, largely driven by the drop in oil prices. Similarly, in Peru, the world’s second-largest copper producer, the economy spiraled downward when a lockdown of more than 100 days early in the pandemic left about 7 million people unemployed. 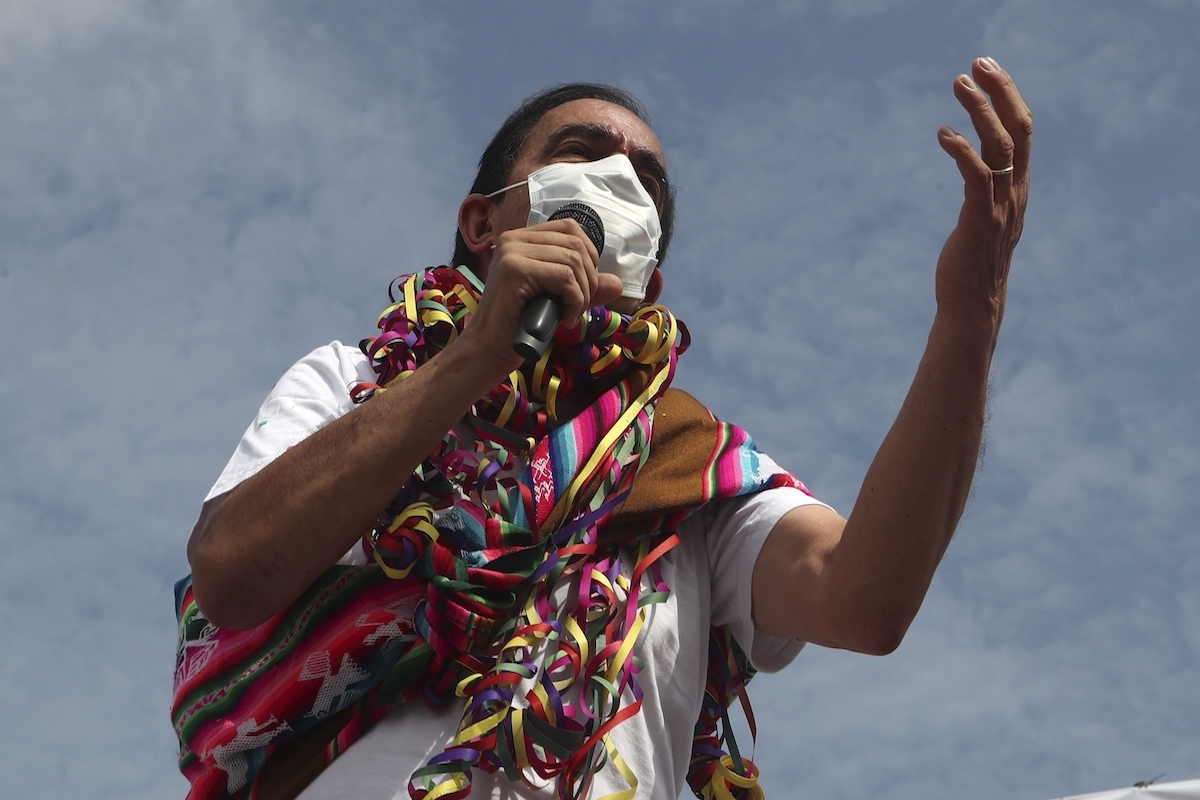 Arauz advanced to Ecuador’s runoff with more than 30% of votes in the February 7 election. Officials several days later declared Lasso the second-place finisher after all votes were tallied and about half of a percentage point separated him from environmentalist and Indigenous candidate Yaku Pérez.

Arauz is backed by Correa, a former ally of Cuba’s Fidel Castro and Venezuela’s Hugo Chávez and who remains heavily influential despite a corruption conviction that sent him fleeing to Belgium, beyond the reach of Ecuadoran prosecutors. Arauz, 37, has proposed making the wealthy pay more taxes, backing away from agreements with the International Monetary Fund and finding legal mechanisms to force the repatriation of deposits that Ecuadorians have abroad.

A former banker, Lasso has lost the last two presidential contests. He favors free-market policies and Ecuador’s rapprochement with international organizations. He tweaked his previously conceptual messaging since advancing to the runoff, offering specific proposals like raising the minimum wage to $500, finding ways to include more youth and women in the labor market and eliminating tariffs for agricultural equipment.

But no matter who wins, Ecuador’s battered economy will stand in the way of any promises made to the nation of about 17.4 million people where voting is mandatory.

“The followers of Arauz and Correa say that it is a dispute between neoliberalism and a vision of a more state-driven management of public resources, post-neoliberal they call it,” said Carlos de la Torre, director of the Center for Latin American Studies at the University of Florida. “I don’t know how much they can do with such depleted resources. It’s honestly a total disaster, and there’s a lot of anger, a lot of contained anger.”

Peruvians are also angry. The prolonged public health crisis has exposed long-existing inequities, most recently when a list that included former President Martín Vizcarra revealed that hundreds of wealthy and well-connected individuals secretly received COVID-19 vaccines before anyone else.

In November, Vizcarra was impeached by Congress over bribes that he allegedly took from a construction company while he was a state governor. He was replaced by congressional president Manuel Merino, who lasted less than a week in office as big protests forced him to resign. Congress then appointed Francisco Sagasti as president. 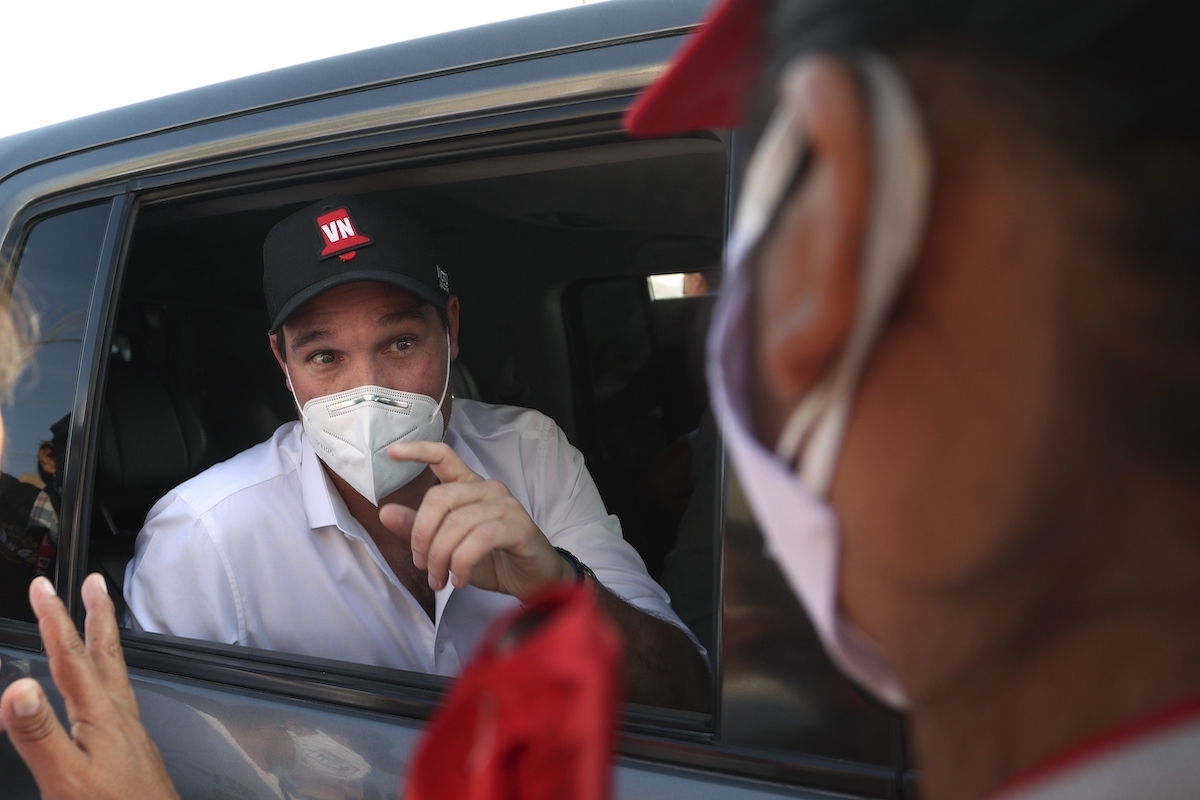 Presidential candidate George Forsyth, with the National Victory party, talks with a supporter as he campaigns in Manchay on the outskirts of Lima, Peru, Monday, March 15, 2021, amid the COVID-19 pandemic. (AP Photo/Martín Mejía)

To win outright and avoid a runoff, a candidate needs more than 50% of votes. Recent polls show the leading candidate, centrist Yonhy Lescano, with roughly 15%. He is followed by center-right George Forsyth, conservative Rafael López Aliaga and Keiko Fujimori, the powerful opposition leader and daughter of the polarizing former president Alberto Fujimori.

One Peruvian candidate has taken time to talk about his habit of wearing a wire chain, known as a cilice, every day to flagellate himself. Another has asked Chile to return to Peru the Huáscar ship, a war trophy captured in the 19th century and kept as a historical relic. But their plans to address the pandemic and the country’s worst economic crisis in decades remain unclear.

“What is striking is how the issue of the pandemic has not been the No. 1 topic,” said Fernando Tuesta Soldevilla, a political analyst with the Pontifical University of Peru. “That is what is surprising as the candidates have talked about everything, but we have the worst wave (of COVID-19 cases) and the highest level of contagion with all that we unfortunately have in front of us.”