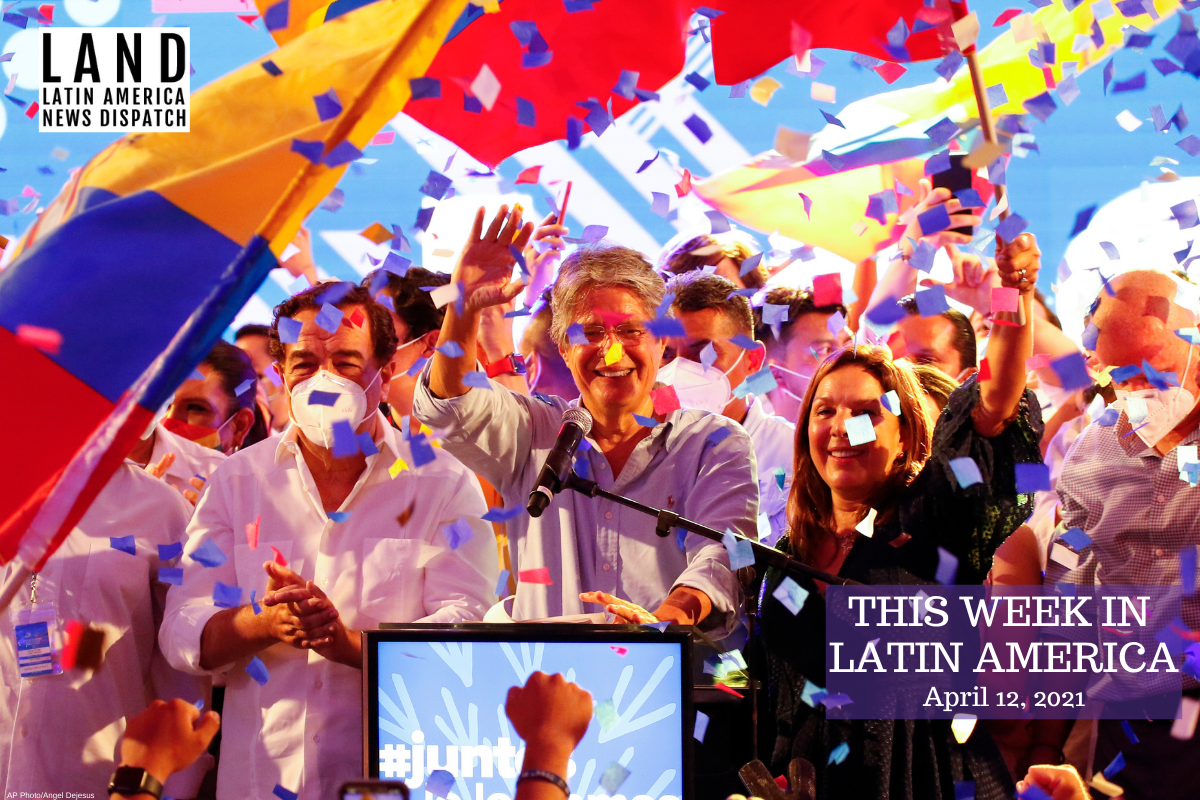 ECUADOR: Conservative businessman Guillermo Lasso beat out leftist Andrés Araúz in presidential elections on Sunday and will be the next president of Ecuador. With over 98% of votes having been counted, Lasso leads by almost five points.

Around 9 p.m. Sunday night, Araúz spoke to his supporters, conceding the election and congratulating his opponent.

Lasso, a native of Ecuador’s largest city Guayaquil, ran a pro-business campaign, promising to maintain Ecuador’s relationships with the International Monetary Fund (IMF) and the United States, which Araúz had said he would renegotiate. In contrast, Araúz pledged a return to the leftist policies of President Rafael Correa, who ruled the country between 2007 and 2017.

Lasso had previously run for president in 2013 and 2017, losing first to Correa and then to unpopular current President Lenin Moreno. Moreno, like Araúz, was a protégé of Correa, but the two clashed as Moreno began to reverse his predecessor’s leftist policies.

Almost 83% of eligible voters participated in the election. Voting is compulsory in Ecuador, and those who fail to show up to the polls without a valid excuse face $40 fines.

ARGENTINA: Buenos Aires port workers began a strike on Wednesday to demand more stable working conditions. The Buenos Aires Container Terminal Service employs hundreds of workers, but its license to work in the port’s Terminal 5 recently ended, putting its workers’ jobs at risk. The strikers are demanding that with the end of the concession, either they be provided new jobs or their salaries continue to be paid, citing the circumstances as unjust. Next year, other companies’ concessions for the rest of the port’s terminals are due to come to an end, threatening to leave even more port workers without jobs. Government officials have begun efforts to bargain with the workers.

CHILE: Chile’s Senate voted last Monday to postpone the election for a constituent assembly that will write the country’s new constitution, in response to rising COVID-19 cases. Chile’s current constitution was written in 1980 under military dictator Augusto Pinochet. Pinochet implemented a free market economic system, privatizing many public institutions, including education, healthcare and pensions. Last October, an increase in Santiago metro fare sparked large-scale protests that finally pushed the government to call a vote on whether the constitution should be rewritten. The referendum passed with 78% of the vote. The upcoming election, in which voters will choose 155 representatives to make up a constituent assembly, had previously been scheduled for April 10.

PERU: Peruvians went to the polls Sunday in the first round of elections to choose the country’s next president. Leftist union leader Pedro Castillo came in first place, but on Monday morning it was still not clear who will be the runner-up to face Castillo in a June runoff. A fast count by the polling company Ipsos put Castillo at 18.6%, followed by conservative Keiko Fujimori, daughter of jailed ex-President Alberto Fujimori, at 14.5%. But Peru’s election authorityreleased preliminary results that said a count of 42.93% of ballots put conservative economist Hernando de Soto in second place, with Fujimori dropping to fourth place.

Late on Sunday, Fujimori released a statement offering to collaborate with de Soto to defeat Castillo in the runoff, no matter which one of the two conservatives makes it to the second round.

The election brought out 74% of Peruvians, for whom voting is compulsory. Of the almost 9 million ballots cast, 15% were either spoiled or blank.

HAITI: The Haitian government rejected an offer of around 756,000 doses of the AstraZeneca vaccine for COVID-19 from the COVAX program of the World Health Organization (WHO). According to the Dominican news agency Efe, Haiti’s government rejected the vaccinebecause of the global concern about its safety. However, Haiti does not have the refrigeration capabilities necessary to receive the Pfizer vaccine, while it could receive the AstraZeneca and Johnson & Johnson shots. So far, not a single vaccine dose has arrived in Haiti. But the country’s population of around 11 million has not been seriously affected by COVID-19, with only 12,840 cases and 252 deaths.

CUBA: Former President Raúl Castro will step down from his role as first secretary of the Communist Party of Cuba at the party’s congress next week. The 89-year-old Castro has led the party since taking over from his brother Fidel in 2011, and remained first secretary after stepping down as president in 2018 in favor of Miguel Díaz-Canel. The change comes months after Cuba passed a major monetary reform that unified the country’s two currencies, which will likely cause hardship for Cubans. It also follows growing protests by the San Isidro Movement (MSI) against the government.

EL SALVADOR: President Nayib Bukele skipped out on a meeting with a U.S. envoy last week in apparent retaliation for perceived slights by Biden officials and Democratic politicians. U.S. special envoy for the Northern Triangle Ricardo Zúñiga visited El Salvador on Thursday, his last stop on a Central America trip during which he met with Guatemalan President Alejandro Giammettei. But in spite of requesting a meeting, Zúñiga was unable to speak with President Bukele during his visit. The special envoy did meet with Salvadoran Foreign Minister Alexandra Hill Tinoco and other government and private-sector officials. According to the Associated Press, Bukele’s decision not to meet with Zúñiga is related to comments made by Biden administration officials characterizing the Salvadoran president’s governing style as undemocratic.

HONDURAS: The Honduran government wants to use U.S. aid aimed at reducing migration to repair damage caused by two major hurricanes last year. A Honduran delegation is in talks with the administration of President Joe Biden, which has set aside $4 billion for aid to Central America, the origin of most of the tens of thousands of migrants being arrested at the U.S.-Mexico border over the last several months. Hurricanes Eta and Iota, Category 4 and 5 storms, respectively, killed almost a hundred Hondurans last November and caused around $10 billion of damage. According to the Honduran government, 95% of Hondurans that have been driving the recent increase in migration are from parts of the country hit by the storms. U.S. officials have not made any specific aid promises.

MEXICO: Mexico is preparing for a steady increase in the number of migrants traveling through the country in the coming years, according to a statement by Foreign Minister Marcelo Ebrard on Thursday. Ebrard said that the United States will need to spend $2 billion a year on developing the Northern Triangle countries in order to significantly decrease the amount of out-migration.

The number of migrants running into U.S. Border Patrol near the southern border has continued to rise, with 168,195 encounters in March.

MEXICO: Mexico’s vaccine rollout has been chaotic and uneven, with states across the country reporting long wait times and unclear instructions for those older 60 who are looking to get vaccinated. In Jalisco, there were reports of people waiting as long as 60 hours, while in Ciudad Victoria, Tamaulipas, the opening of a drive-through vaccination site led to a 5-kilometer line of cars.

In Mexico City, police announced that two men in their thirties were arrested after leaving a vaccination site in the borough of Coyoacán for disguising themselves as seniors to get the injection. One of the men was identified as a professional e-sports player and the other as a brand manager for EA Sports Latin America.

Want to receive Today in Latin America directly to your inbox? Sign up here.

Latin American News Dispatch is raising money to continue publishing this newsletter and our original feature reporting for the rest of 2021. Can you help us reach $20,000 by April 20? Every donation helps!