OPINION: One Reason Unions Lose? Leadership Does Not Reflect the Membership 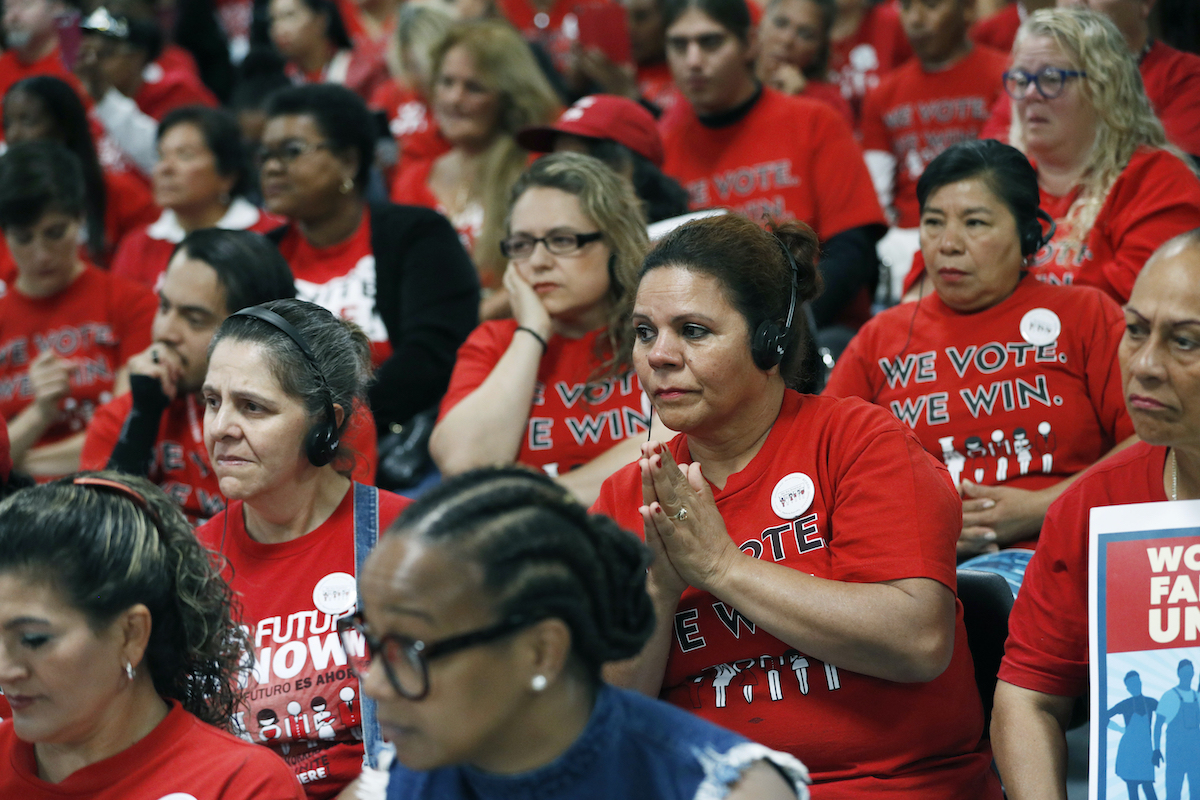 In this October 17, 2018, photo, members of the Culinary Union listen to Democratic candidates during an event at the union hall in Las Vegas. (AP Photo/John Locher)

CHICAGO — When we think of the decline of the labor movement in the United States, we often reference deregulation, union-busting, the loss of manufacturing jobs and the rise of globalization. These are important factors, but they only tell part of the story. When unions prioritize these narratives over internal problems within the labor movement, they inevitably come up with limited solutions that include legislation. Legislation is important, but it won’t lead to a thriving labor movement. If we can think about unions from a pragmatic perspective it becomes evident that a union lives and dies by its ability to attract new members.

Unions are underdogs when compared to corporations. They do not have the capacity to outspend Fortune 500 companies when it comes to lobbying the government, campaigning for votes during a union election or retaining top lawyers. The only advantage unions have is their ability to build deep organizing committees over time. It’s baffling when unions abandon their only advantage and willingly engage in losing battles. It’s enough to make anyone wonder if unions are good at building organizing committees after all.

One reason unions have a difficult time organizing nonunion workers is that their leadership remains a white space. However, labor unions often get a pass because they have a diverse membership. They can point to union members that are janitors, housekeepers and truck drivers and claim that they are in service of communities of color. But there are discrepancies between the diversity of the dues-paying membership and the leadership. Precisely because labor unions have a large base of diverse membership, it is disturbing that the majority of the general presidents and general secretary-treasurers are white.

A survey of 60 unions (56 unions affiliated with the AFL-CIO and 4 unions affiliated with Change to Win Federation) yielded only 11 unions that had at least 1 person of color listed as a general president or general secretary-treasurer. Of these 11 unions, only 6 of them had two POC listed in these top roles. The question is what to make of the other 49 unions?

Before we can interpret what this means, there needs to be clarity about how I got these numbers. I literally went to the website of each of these 60 unions and looked up their leadership, with focused attention on the top roles of general president and general secretary-treasurer. I looked up the websites of unions because it’s what most workers in the middle of a union drive will do. In the early 1900s, when the labor movement was in its infancy, American workers in a union drive learned about unions from a labor organizer or from their employer. Today most workers have a smartphone and will at some point look up the union’s website and make up their own mind before they vote.

What does it mean that over 80% of labor unions in the U.S. are led exclusively by white people? There isn’t a straightforward answer. For instance, some industries are made up of a mostly white workforce. While we can critique such industries as a whole, it certainly makes sense that these workers have white union representation. However, this gets complicated when we look at the hotel industry for example. The heart of a hotel are the room attendants. This is a workforce that is predominantly Latina, Black and immigrant. Yet, the top leadership roles of UNITEHERE, the hotel workers union, are filled by two white people. UNITEHERE represents over 300,000 workers, most of which are POC. It is unlikely that there are no qualified POC leaders within the pool of their own membership.

In the interest of transparency, I should note that I was terminated from UNITEHERE local 11 in 2007. Although, I hardly count as a disgruntled former employee. While a student at Whittier College from 2011-2014, I organized dining hall workers with UNITEHERE. I also participated in UNITEHERE’s summer internship in 2013. They do good work, but they lack diversity in their top roles.

The workforce in the United States is increasingly Latino. According to the Pew Research Center’s analysis of census data from 2010-2019, the U.S. population increased by 18.9 million and over half of that increase (52%) was comprised of Hispanics. Unions could choose to be optimistic with these demographic numbers. They could recognize that the Latino community is born out of legacies of colonialism and resistance. They can view Latinos as an asset to the project of rebuilding a militant labor movement. Thus far, unions have largely treated Latinos as dues payers, lower-level organizers, mid-managers and not much more. Imagine what the labor movement could be if the leadership reflected the membership.

This November Teamsters will elect new general leadership. Among the candidates running for general secretary-treasurer is rank-and-file Teamster for over 25 years and President of the Los Angeles County Federation of Labor, Ron Herrera. Herrera is unapologetically Chicano. On the Teamsters 1932 Hispanic Caucus podcast, Herrera is asked by hosts Carlos Gonzalez and Juan Delgado how he identifies. Ron explains that Chicano has a militant meaning that was part of the Chicano Moratorium of the 1970s. Ron goes on to say, “We are looked at differently. We have to understand that… I am a Latino leader. I know who I am and I know what is expected of me.” It’s not just what Herrera says, but the way he says it. It’s the Chicano accent. The cadence, slow and low like a lowrider. I would bet serious feria that Ron Herrera walks like a Chicano. If you don’t know what walking like a Chicano means, step aside when we’re doing our thing.

It’s clear that before a worker will fight for the union, they must first envision themselves as a union member. The predominantly Latino workforce of the future will need to see themselves in people like Ron Herrera before they vote union. I’m hopeful that the name Hoffa will be replaced with Herrera and many other last names with accents above their letters. Ron Herrera says on the podcast, “my biggest accomplishment hasn’t happened yet because it’s my legacy that will be my biggest accomplishment…it’s what Latinos will become in our union.” The labor movement needs to ask itself what Latinos will become in each and every union. There needs to be change. If you don’t believe me go back and reread this piece. Pay attention to how the tone and voice shift. Change is inevitable, foo.

Still not a believer? Stay tuned for Rise Up, Foo, a series that profiles a different Latino organizer each month. Premiering May 2021.

Arturo “Tootie” Alvarez is based in Chicago. He trucks. He writes. Not at the same time. Twitter @TootieAlvarez.

3 responses to “OPINION: One Reason Unions Lose? Leadership Does Not Reflect the Membership”