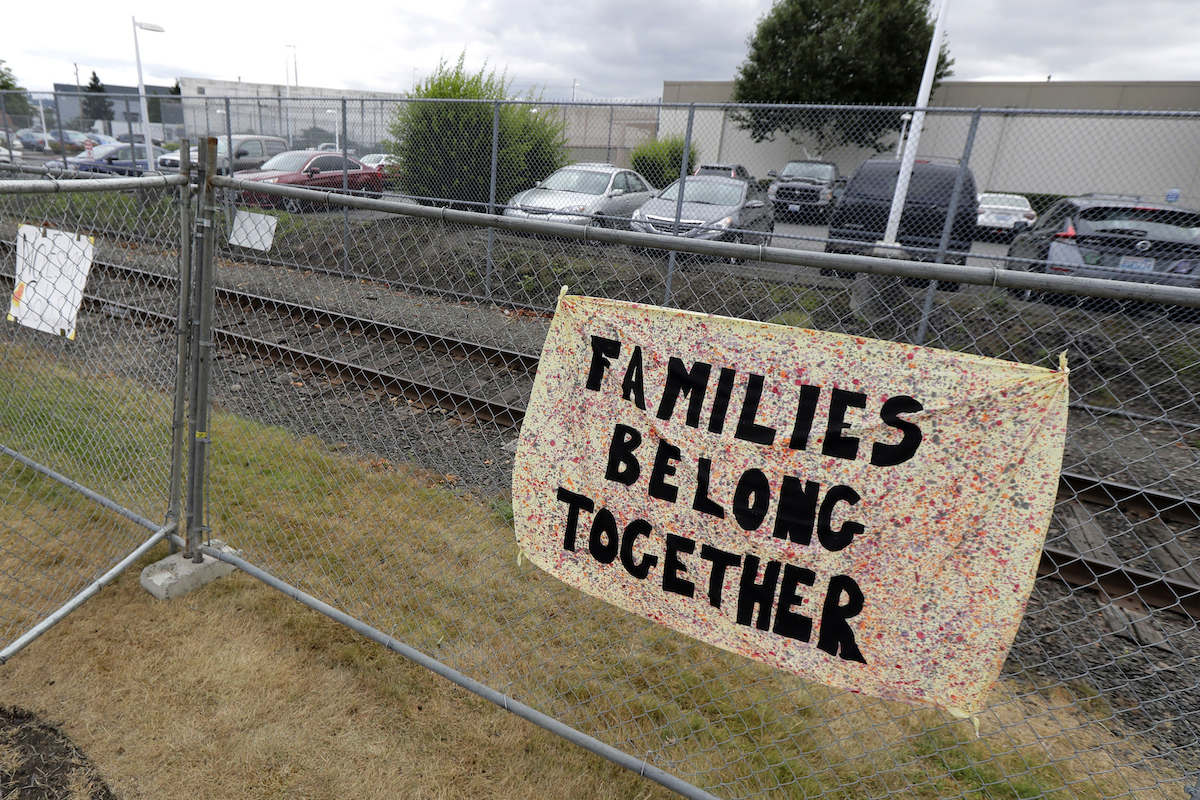 This July 10, 2018 file photo shows a sign that reads “Families Belong Together” on a fence outside the Northwest Detention Center in Tacoma, Wash. (AP Photo/Ted S. Warren, File)

OLYMPIA, Wash. (AP) — One of the country’s largest for-profit, privately run immigration jails would be shut down by 2025 under a bill signed Wednesday by Washington Gov. Jay Inslee.

The measure approved by the Washington Legislature bans for-profit detention centers in the state. The only facility that meets that definition is the Northwest Detention Center in Tacoma, a 1,575-bed immigration jail operated by the GEO Group under a contract with U.S. Immigration and Customs Enforcement.

“Washington has not supported use of private prisons, and this bill continues that policy by prohibiting private detention facilities from operating in the state,” Inslee said before signing the bill.

Washington joins several states, including California, Nevada, New York and Illinois, that have passed legislation aiming to reduce, limit or ban private prison companies from operating. But Washington is only the third —following Illinois and California— to include immigration facilities as part of that ban.

The new law in Washington state, which is likely to face a legal challenge, would allow GEO to continue operating the jail until its contract with ICE expires in 2025.

GEO sued over a similar 2019 measure in California, and that lawsuit was later consolidated with a Trump administration lawsuit that followed. A federal judge there largely sided with the state, but the case was appealed. It is now before the 9th U.S. Circuit Court of Appeals and is set for oral arguments in June. Last month, the Biden administration filed a brief with the court adopting the arguments of the previous administration, challenging California’s law on constitutional grounds.

In an emailed statement, Alexandra Wilkes, a spokeswoman for the Day 1 Alliance, a trade association of GEO and other private detention companies, wrote that the legislation is “a misguided, politically-motivated effort to ‘Abolish ICE’ by targeting longtime government contractors who have zero role in deciding federal immigration policy.”

She wrote that the consequences of the center closing could result in migrants being transferred to local jails or “moved far from family and friends.”

The Tacoma immigration lockup has long been a target of immigrant rights activists. Washington Attorney General Bob Ferguson is suing to force GEO to pay the state minimum wage to detainees who perform janitorial and other tasks at the jail.

The Northwest Detention Center currently houses fewer than 200 detainees because of pandemic-related precautions. Supporters of the new law argued that the severe drop in immigration detention during the pandemic proved it’s not necessary to keep so many immigrants locked up, and they criticized minimum-bed quotas that are written into contracts with private detention facilities.

President Joe Biden has instructed the Justice Department not to renew contracts with private prisons, but that order doesn’t apply to the immigration detention system under the Department of Homeland Security.