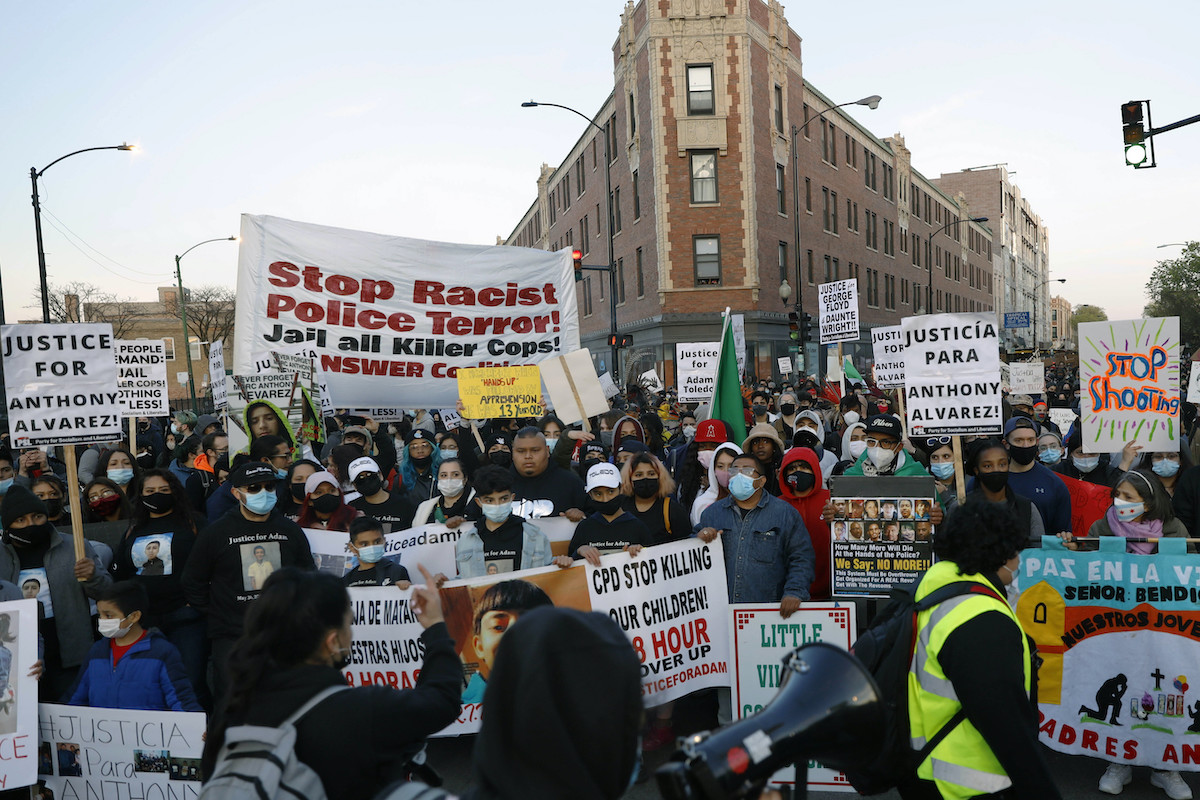 CHICAGO (AP) — Newly released video that shows a Chicago police officer fatally shooting a 13-year-old will be key evidence when prosecutors consider a case against the officer and are confronted with both the emotions surrounding the chilling footage and legal precedent that makes it difficult to bring charges against law enforcement.

Video of last month’s encounter was released Thursday and provoked an outpouring of grief and outrage. It shows Officer Eric Stillman shooting Adam Toledo less than a second after the boy drops a handgun, turns toward Stillman and begins raising his hands.

Some viewers have called for Stillman to be charged or fired. But for others, the video shows how difficult such decisions might be for prosecutors and police higher-ups, with an officer making a quick decision to shoot after chasing a suspect down a dark alley while responding to a report about gunshots.

Whether Stillman is charged will be up to the Cook County state’s attorney’s office, which will get the Civilian Office of Police Accountability’s report after the independent board completes its investigation. 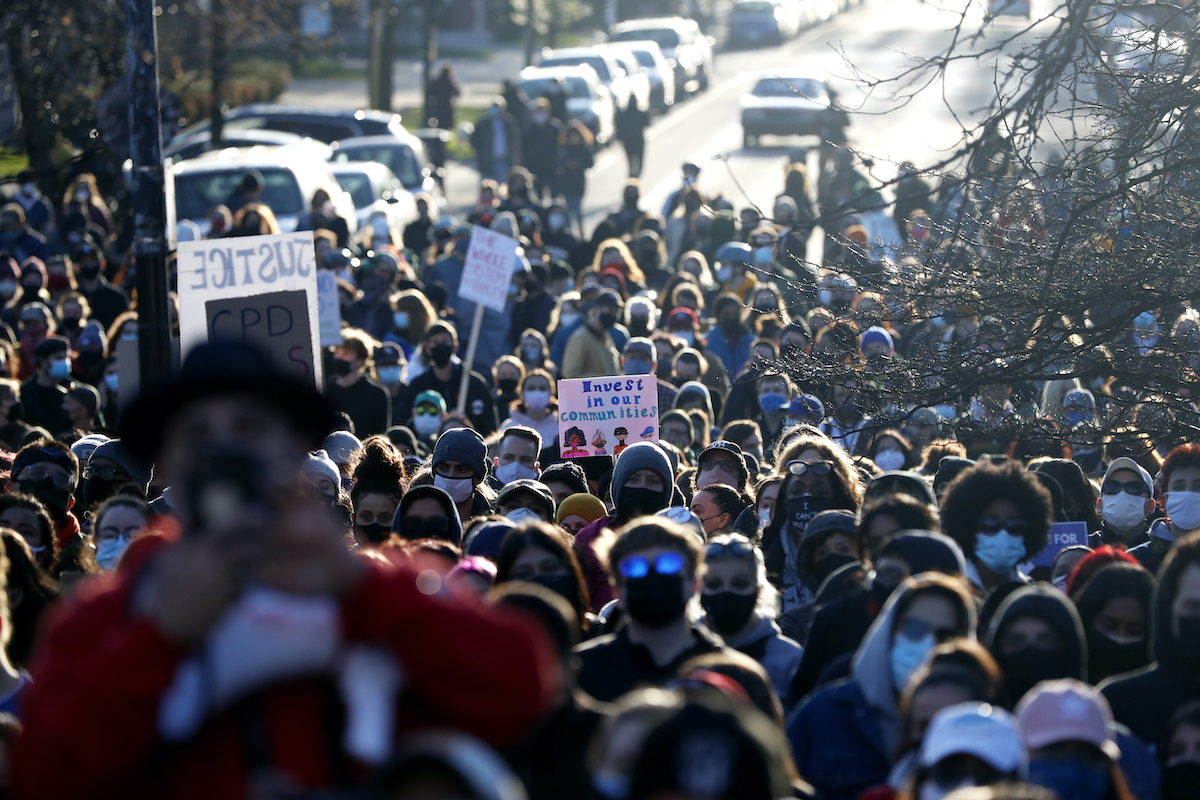 Several legal experts said Friday that they don’t think Stillman could be charged under criteria established by a landmark 1989 Supreme Court ruling on the use of force by police, though another said prosecutors might see enough evidence to justify an involuntary manslaughter charge and let a jury decide guilt or innocence.

The killing of Toledo, who was Latino, by Stillman, who is white, adds to already-heightened tension over policing in Chicago and elsewhere in the U.S., particularly in Black and Latino communities. The videos and other investigative materials were released against the backdrop of the trial in Minneapolis of former Officer Derek Chauvin in the death of George Floyd and the recent police killing of another Black man, Daunte Wright, in one of that city’s suburbs.

Around a thousand people gathered Friday evening in a park on Chicago’s northwest side, some holding signs that read, “stop killing kids” and “CPD can’t be reformed.” A brass band played music as the crowd chanted, “no justice, no peace”. 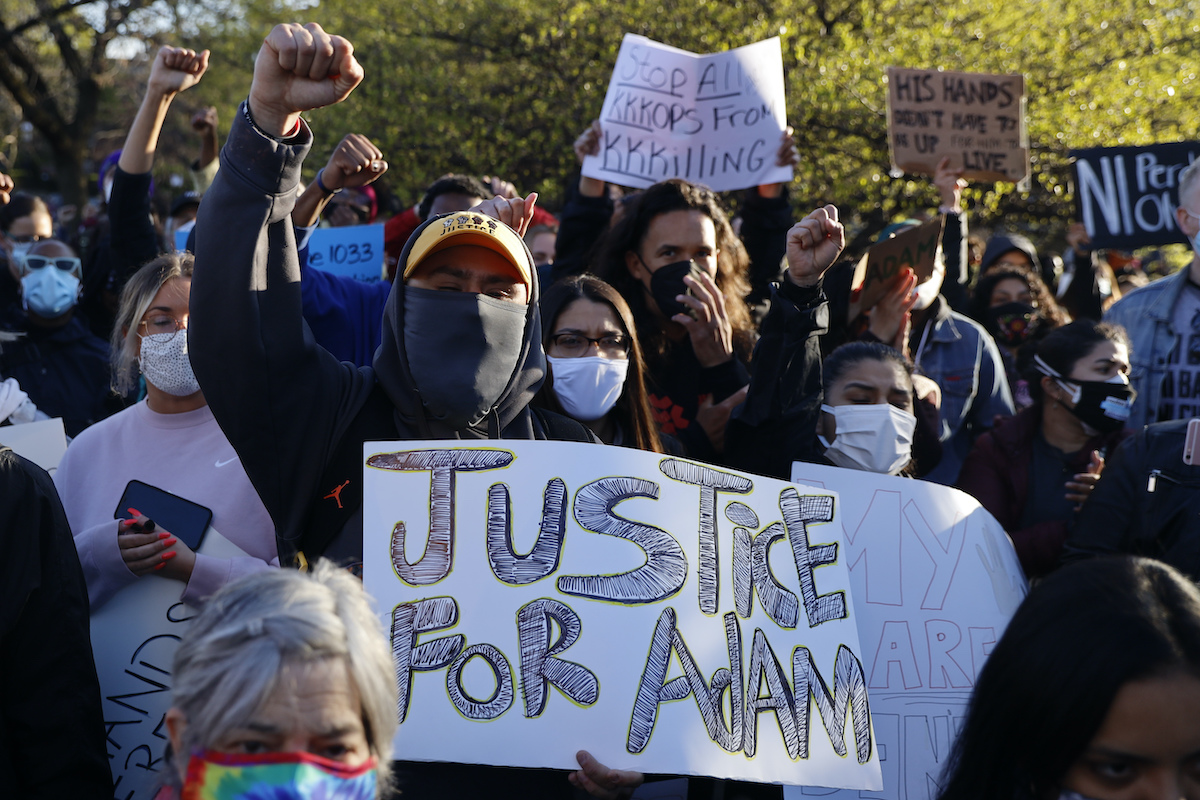 Dulce Rodríguez, 34, held a sign that read, “We are Adam Toledo.” Her 5-year-old daughter, Vida waved a large Mexican flag.

“That could’ve been anybody’s kid,” said Rodríguez, who lost a cousin to gun violence last June. She said police entice gun violence in under-resourced neighborhoods like where she lives.

“We do better when they’re not there,” she said.

Although Mayor Lori Lightfoot implored the public to keep the peace and allow the police review board to complete its investigation, some had already made up their minds about what happened to Toledo, whose mother described him as a curious and goofy seventh-grader who loved animals, riding his bike and junk food.

Speaking Friday on the floor of the Illinois House, state Rep. Edgar González, who lives four blocks from where Toledo died, called the killing a “murder” and expressed frustration at what he described as a too-familiar pattern of police abuse. 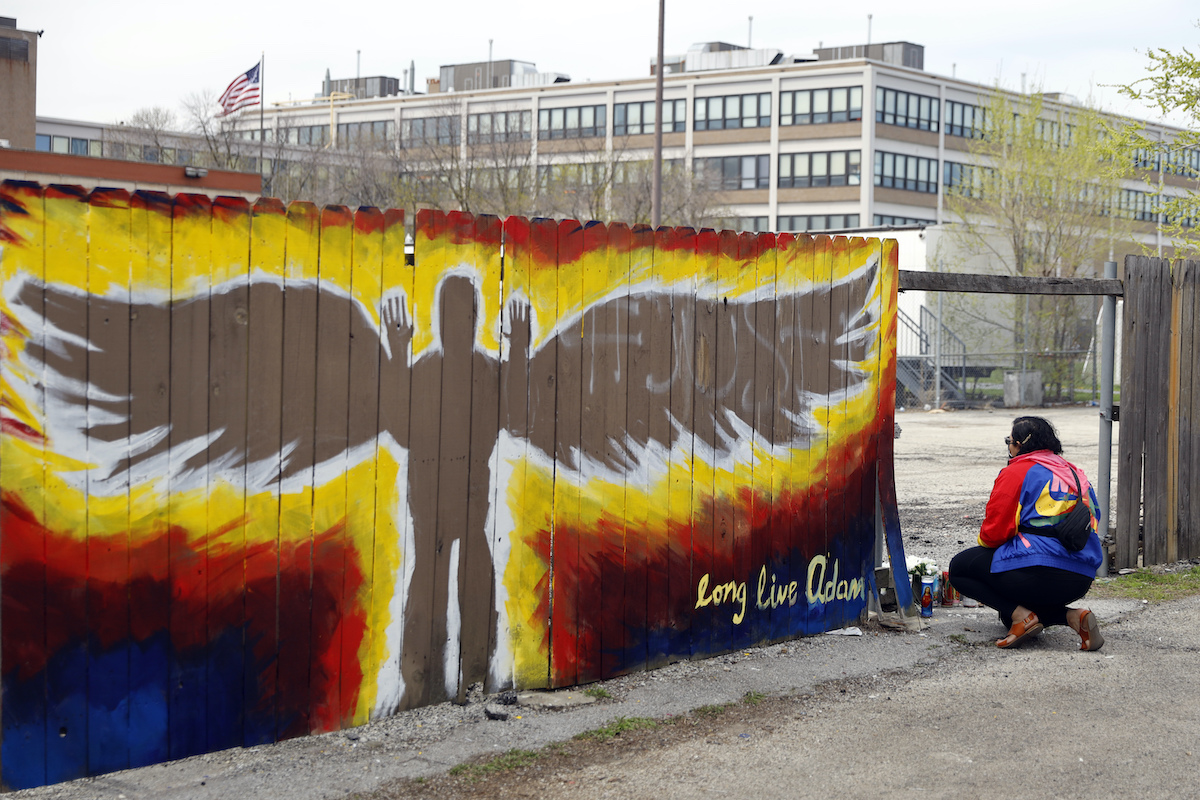 Andrea Fernanda Serrano kneels as she pays her respect to the site where 13-year-old Adam Toledo was shot by police now marked with a mural in the Little Village neighborhood of Chicago, Friday, April 16, 2021. (AP Photo/Shafkat Anowar)

When asked about the video Friday, White House press secretary Jen Psaki called it “chilling” and a reminder that across the country, “law enforcement uses unnecessary force too often, resulting in the death of Black and Brown Americans.” She said she didn’t know if President Joe Biden had watched it.

Stillman was responding with other officers to reports of shots fired in Little Village, a predominantly Hispanic, working-class neighborhood of the city’s southwest side, at around 3 a.m. on March 29. Nineteen seconds elapsed from when Stillman got out of his squad car to when he shot Toledo. His jumpy, nighttime bodycam footage shows him chasing Toledo on foot down an alley for several seconds and yelling “Police! Stop! Stop right (expletive) now!”

As the teen slows down, Stillman yells “Hands! Hands! Show me your (expletive) hands!”

Toledo then turns toward the camera, Stillman yells “Drop it!” and midway through repeating that command, he opens fire and Toledo falls down. While approaching the wounded boy, Stillman radios in for an ambulance. He can be heard imploring Toledo to “stay awake,” and as other officers arrive, an officer says he can’t feel a heartbeat and begins administering CPR. 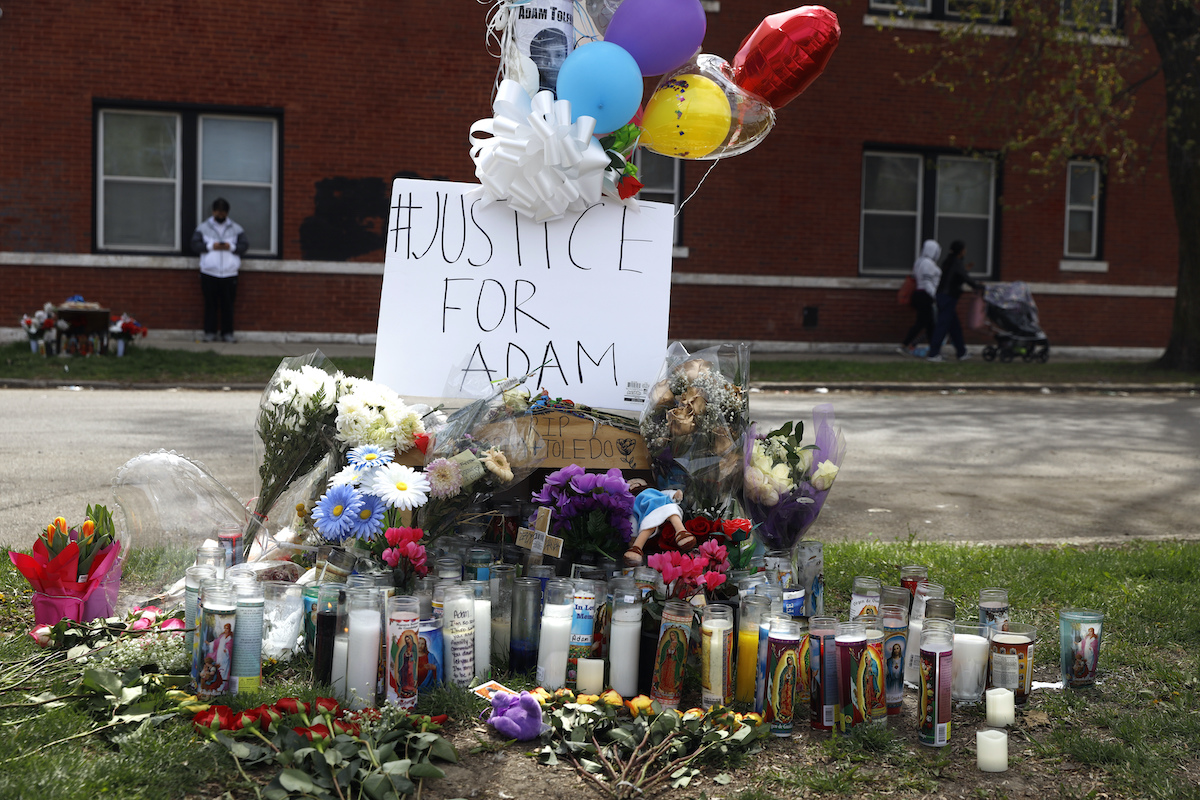 A memorial near the spot where 13-year-old Adam Toledo was shot by a police officer in Chicago’s Little Village neighborhood, Friday, April 16, 2021. (AP Photo/Shafkat Anowar)

Other video footage released Thursday shows that Toledo had a gun in his right hand just before he was shot, and Stillman’s bodycam footage shows him shining a light on a handgun on the ground near Toledo after he shot him.

In its 1989 ruling, the Supreme Court said officers’ use of force may be legal if they truly believed their lives were at risk in the moment—even though, in hindsight, it becomes clear they weren’t actually in danger.

The legality of a deadly shooting, the high court said, “must be judged from the perspective of a reasonable officer on the scene, rather than with the 20/20 vision of hindsight.” Similar wording is incorporated into Illinois law and the Chicago Police Department’s use-of-force guidelines.

Stillman knew Toledo had a gun within a second or two of shooting him, and the officer knew shots had been fired in the area minutes earlier, said Phil Turner, a former federal prosecutor in Chicago.

“I don’t think there is any question that any other reasonable officer would have acted in the same way that officer acted,” Turner said. “It was such a split-second decision. I don’t think the officer will be charged.” 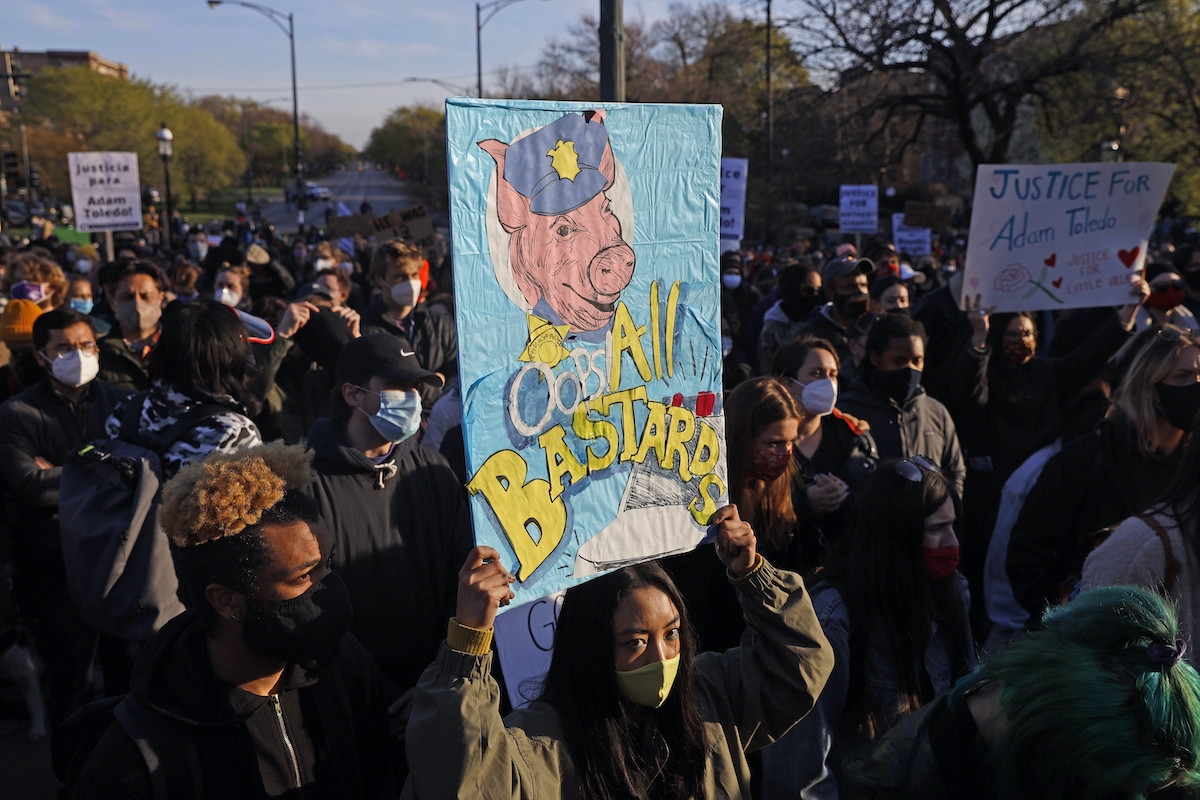 Stillman’s attorney, Tim Grace, said the officer “was faced with a life-threatening and deadly force situation” and that “all prior attempts to deescalate and gain compliance with all of the officer’s lawful orders had failed.”

But Adeena Weiss-Ortiz, an attorney for Toledo’s family, told reporters it’s irrelevant whether Toledo was holding a gun before he turned toward the officer.

“If he had a gun, he tossed it,” she said. “The officer said, ‘Show me your hands.’ He complied. He turned around.”

Stillman, who served in Afghanistan with the Marines and is a staff sergeant in the Selected Marine Corps Reserve, joined the police department in 2015, according to an incident report from the shooting.

During his six years with the department, Stillman has been named in at least four use-of-force reports, according to data collected by the Invisible Institute, a Chicago-based group that tracks police misconduct. In each report, the subjects were listed as Black men in their late 20s or older. The reports include a takedown/emergency handcuffing in 2017, and wristlocks, takedowns/emergency handcuffings and strikes with an open hand in 2018 and 2019. 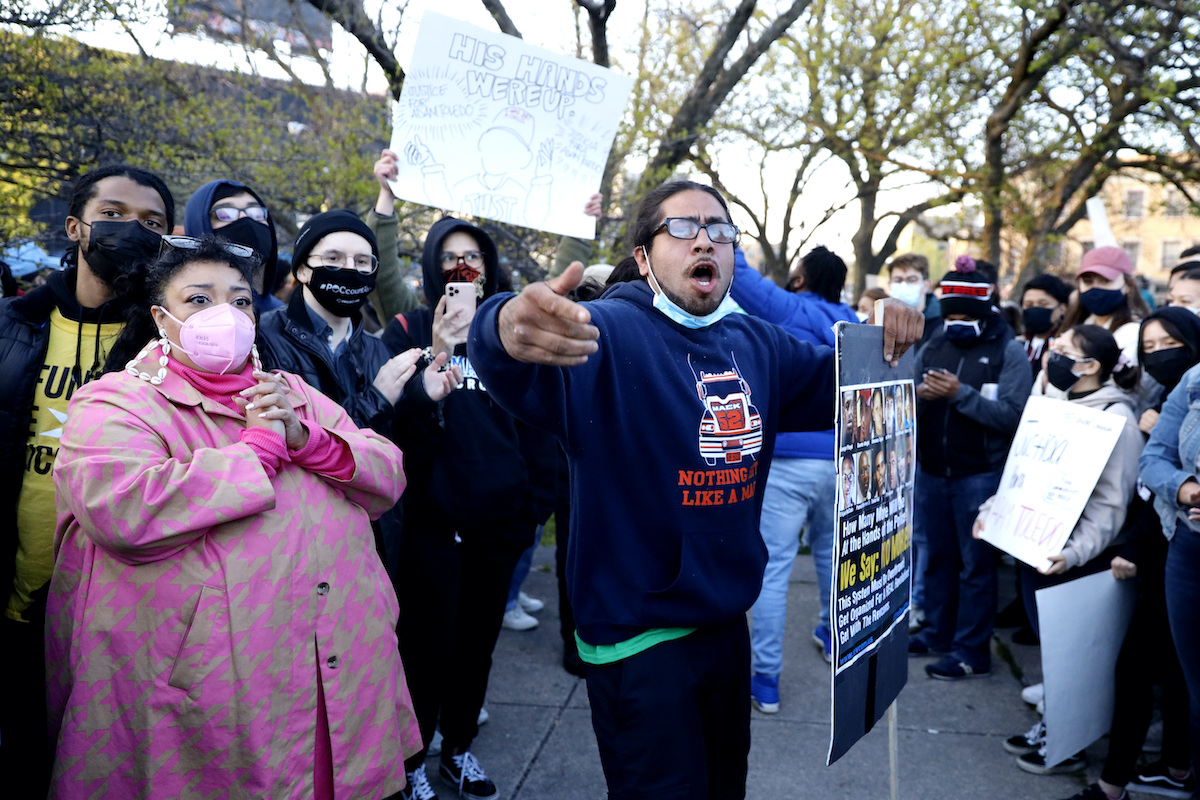 Alison Flowers, who heads the institute’s investigations, called the number of reports “concerning,” adding, “Usually, we see that level of activity more over the course of a long career, not in a matter of just six years.”

In addition to posting Stillman’s bodycam footage, the review board released footage from other bodycams, four third-party videos, two audio recordings of 911 calls, and six audio recordings from ShotSpotter, the technology that led police to respond to the sound of gunshots that morning.

Toledo and a 21-year-old man fled on foot when confronted by police. The man, Rubén Román, was arrested on a misdemeanor charge of resisting arrest but was later charged with felonies including the reckless discharge of a firearm, illegal use of a weapon by a felon and child endangerment. He was ordered held on a $150,000 bond.

Right after the shooting, people in the community started calling on the review board to release any bodycam footage of it. The Chicago Police Department has a long history of brutality and racism that has fomented mistrust among the city’s many Black and Latino residents. And the city has a history of suppressing damning police videos, including its efforts to prevent the release of footage of the 2014 killing of Laquan McDonald by a white officer who was eventually convicted of murder.