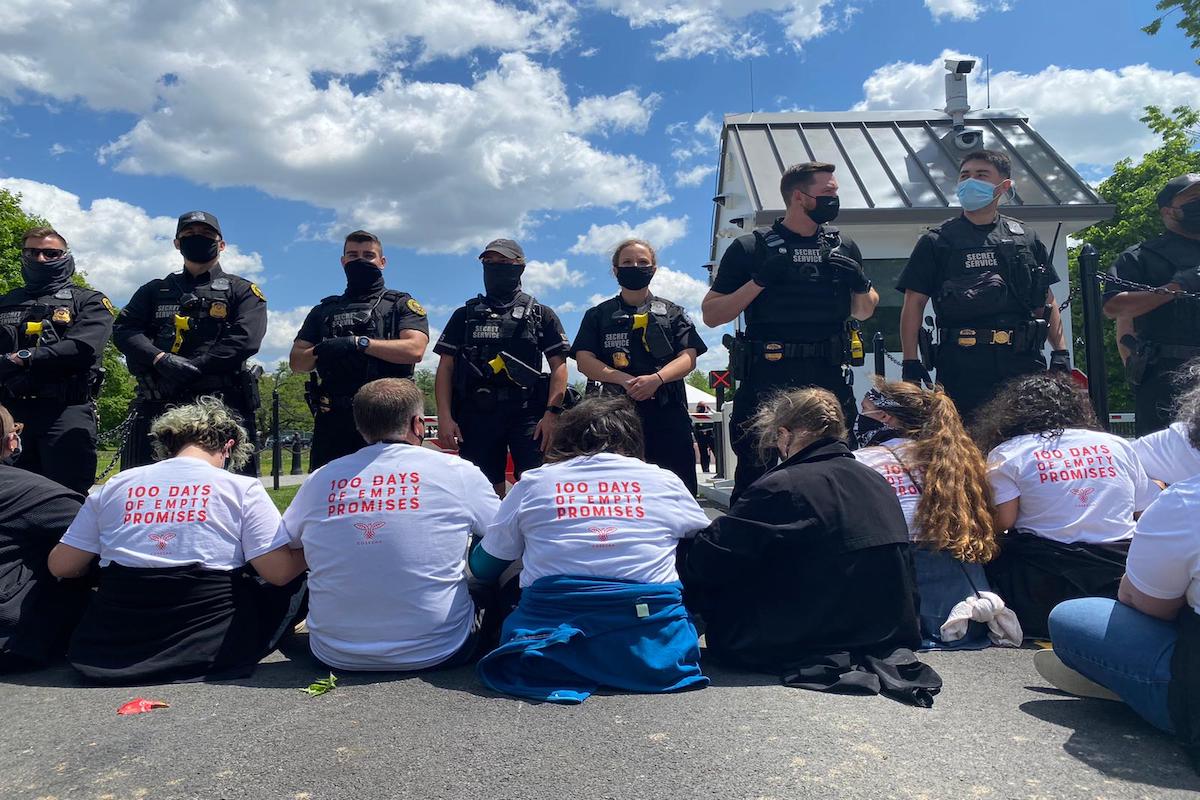 Immigrant rights activists protesting near the White House on April 30, 2021

Immigrant rights activists —including undocumented immigrants risking deportation— are protesting President Biden’s 100 days in office and what they call “the Democratic Party’s broken promises to the immigrant community” with a direct action in Washington, D.C., on Friday.

Cosecha members, wearing shirts that say "100 Days of Empty Promises" have been in a stand off with Secret Service for an hour around the perimeter of the White House.

Biden, this is the message we're sending to you. We're done waiting around & we won't settle for crumbs pic.twitter.com/SHqsOB4oIr

Images of activists and allies blocking traffic near the White House are being shared online by Movimiento Cosecha.

LATEST: After blocking traffic in front of the White House for two hours, immigrants and supporters are now blocking car access to the WH service entrance. Cops about to move to make arrests. pic.twitter.com/8ovGq7gaCi

By Friday afternoon, there were reports of protesters getting arrested.

After a staggering *five hours* of obstructing traffic around Lafayette Square and the White House, police have just starting arresting community members protesting Biden's lack of action on immigration in his First 100 Days in office.

A livestream of the actions were broadcast on Facebook:

The focus of the direct action called for Biden and Democrats to stop offering piecemeal solutions on immigration reform. According to a release actions from organizers, piecemeal legislation “excludes and crinimalizes millions in the undocumented community.” Protesters are calling for “permanent protection for all 11 million undocumented immigrants.”

“President Biden ended his first 100 days in office with broken promises and insufficient action for my community,” said Gema Lowe, an immigrant organizer with Movimiento Cosecha participating in the direct action. “Biden originally committed to a pathway to citizenship for all 11 million undocumented immigrants. Now he is ready to pursue a ‘piecemeal’ strategy instead that would exclude me and millions of others who have lived in this country for decades. We deserve better. That is why today I am willing to risk arrest, detention, and deportation to demand papers, not crumbs.”

Hector Morales, a Cosecha organizer and DACA recipient also participating in the direct action, said: “The current legislation the Democrats are pushing only focuses on a small portion of undocumented immigrants. Even though I would qualify under the current Dream and Promise Act, I am risking arrest today to tell President Biden that I won’t accept piecemeal bills that exclude and criminalize my own community members. I won’t accept these crumbs. We need permanent protection for all.”

According to organizers, there are plans for a mobilization of undocumented workers and families in downtown D.C.

On Wednesday, before Biden’s speech to a joint session of Congress, another action by other immigrant rights groups called for the President and Democrats to push for a pathway to citizenship.