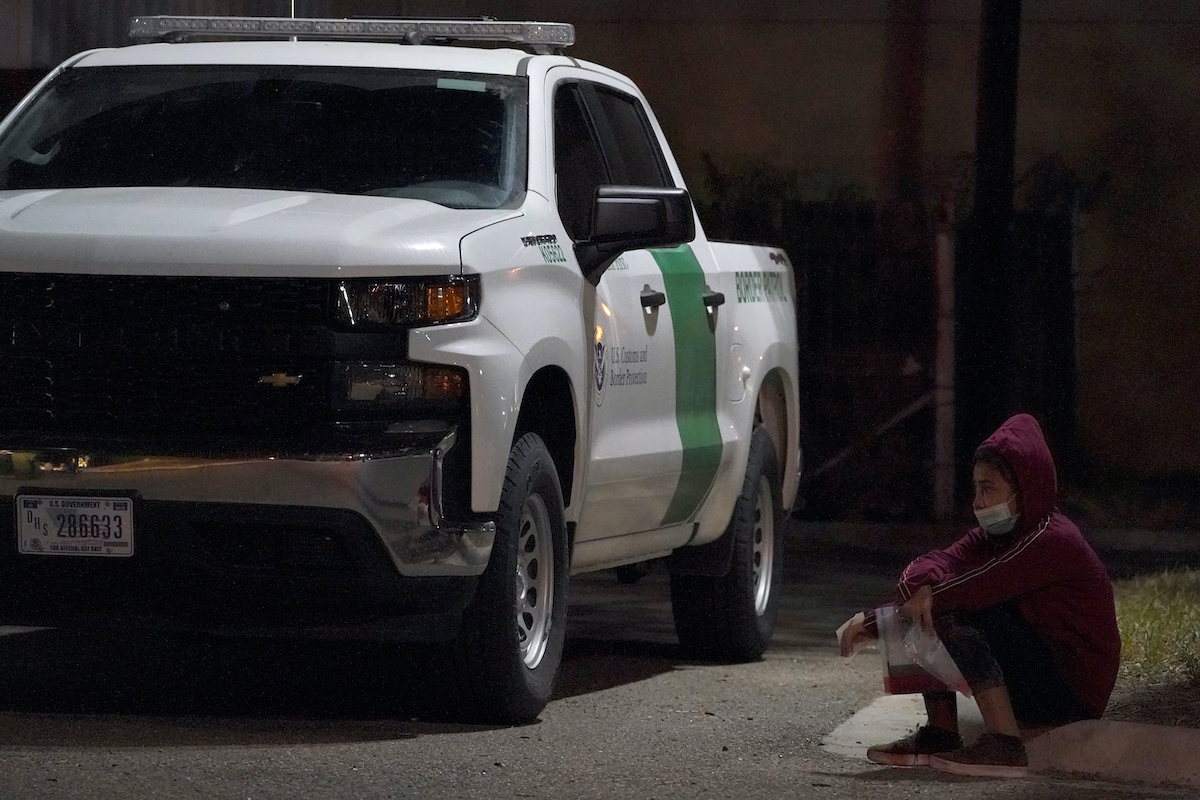 A migrant child sits next to a U.S. Customs and Border Protection vehicle at an intake area after turning herself in upon crossing the U.S.-Mexico border in Roma, Texas. (AP Photo/Julio Cortez)

Confronted with a stream of unaccompanied children crossing the border from Mexico, the U.S. government has awarded shelter construction and management contracts to private companies that critics say may not be equipped to adequately care for the minors.

Some of the companies have responded to natural disasters and more recently developed quarantine centers at the onset of the coronavirus pandemic. Others have worked with U.S. border officials over the past few years to set up tented holding areas for migrants.

The new shelters are needed as the government finds itself with more than 22,000 children in government custody and insufficient workers to help release them to family members.

In its haste to provide new facilities, the Department of Health and Human Services awarded the largest contracts —worth more than $2 billion— to two companies and a nonprofit without a bidding process and has exempted providers from the staffing requirements that state-licensed child facilities must meet, according to HHS and federal spending records.

Two of the new large facilities have been shuttered in the past few weeks. HHS did not explain why they were closed so suddenly, but said in a statement that they were only for temporary use and that children had been sent to different temporary sites or reunited with their families.

Children told attorneys who visited some sites they had not met with case managers, who are tasked with reuniting them with family members. HHS has refused all access to news media once children are brought into facilities, citing the coronavirus pandemic and privacy restrictions.

“When we are spending hundreds of millions of dollars, the government has to ensure that the services are being provided and that we are meeting the needs of the children,” said Scott H. Amey, general counsel at the Project on Government Oversight, a private watchdog group.

In a statement, HHS said the new child-migrant centers are “consistent with best practices/standards in emergency response or other humanitarian situations.” It said that in addition to building new shelters, it also has taken “aggressive actions” to speed up the children’s release, such as by putting them on flights to be with their families. On Monday, the Biden administration said four families that were separated at the Mexico border during Donald Trump’s presidency will be reunited in the United States this week. Homeland Security Secretary Alejandro Mayorkas called the reunifications “just the beginning” of a broader effort.

Sarah DeYoung, a University of Delaware professor who studies evacuation shelters, worries many of the sites have a “very institutional setting feel” that is not optimal for children.

“Just because those were selected in the past doesn’t mean they are doing it well in terms of children’s well-being,” DeYoung said. “It is critical that there would still be an outside assessment… including public health experts and people who have pediatric expertise.”

Since February, the government has awarded about $3 billion in contracts to house unaccompanied children, more than $2 billion of which were no-bid contracts awarded to three recipients: Rome, New York-based Deployed Resources LLC; Family Endeavors Inc. of San Antonio; and Rapid Deployment Inc., based in Mobile, Alabama.

Deployed Resources has been hired to run a 1,500-bed emergency shelter for children in Donna, Texas, for which it could receive up to $719 million. The company previously built tent courts for a program under Trump that required asylum seekers to wait in Mexico for immigration court hearings. It also has built other tented detention facilities on the border, temporary sites for people displaced by hurricanes and base camps for the U.S. military.

The nonprofit group Family Endeavors Inc., a disaster-relief agency, could receive up to $580 million for running an emergency intake site in Pecos, Texas. Previously, the organization received $87 million from U.S. Immigrations and Customs Enforcement to provide hotel rooms and other services to migrant families who cannot be expelled under a public health rule in effect at the border.

The potential amount of the latest contract is more than 13 times the organization’s total revenue during 2018, according to the latest annual tax filings available.

Endeavors CEO Jon Allman said the group has decades of experience with “marginalized populations” and has served migrant communities since 2012, staffing up to 3,000 employees when needed.

“Endeavors is proud to serve as a partner with the federal government during this daunting humanitarian crisis,” Allman said in an email. “Many nonprofits were asked but declined.”

Earlier this year, the group hired Andrew Lorenzen-Strait, a former ICE official who most recently served as a member of President Joe Biden’s transition team. He was first retained as a consultant for Endeavors early in 2020, Allman said. He said Lorenzen-Strait has expertise in “migrant child and family welfare.”

Rapid Deployment Inc., meanwhile, has received two large contracts totaling $614 million to manage a site in Fort Bliss, Texas, that is emerging as the largest of its kind and could expand to 10,000 beds, according to government solicitation documents.

The government has been criticized in the past for its handling of previous large-scale shelter-related contracts, during the Trump administration.

An audit released by the HHS Office of the Inspector General in December found that the agency poorly managed a no-bid contract awarded to a company to run a big facility for children in Homestead, Florida, in 2019.

HHS paid $67 million to Comprehensive Health Services for the three months it ran the facility —with no children— and overpaid about $2.6 million overall, according to the report, which noted that the government could have lowered costs had there been a bidding process.

Under Biden’s administration, HHS has not given new contracts to Comprehensive Health Services. It has however, awarded a $79 million contract to Southwest Key Programs, an Austin, Texas-based nonprofit that at one point was the nation’s largest provider of migrant children facilities. The company came under fire for taking in young children during the large-scale family separations by the Trump administration. 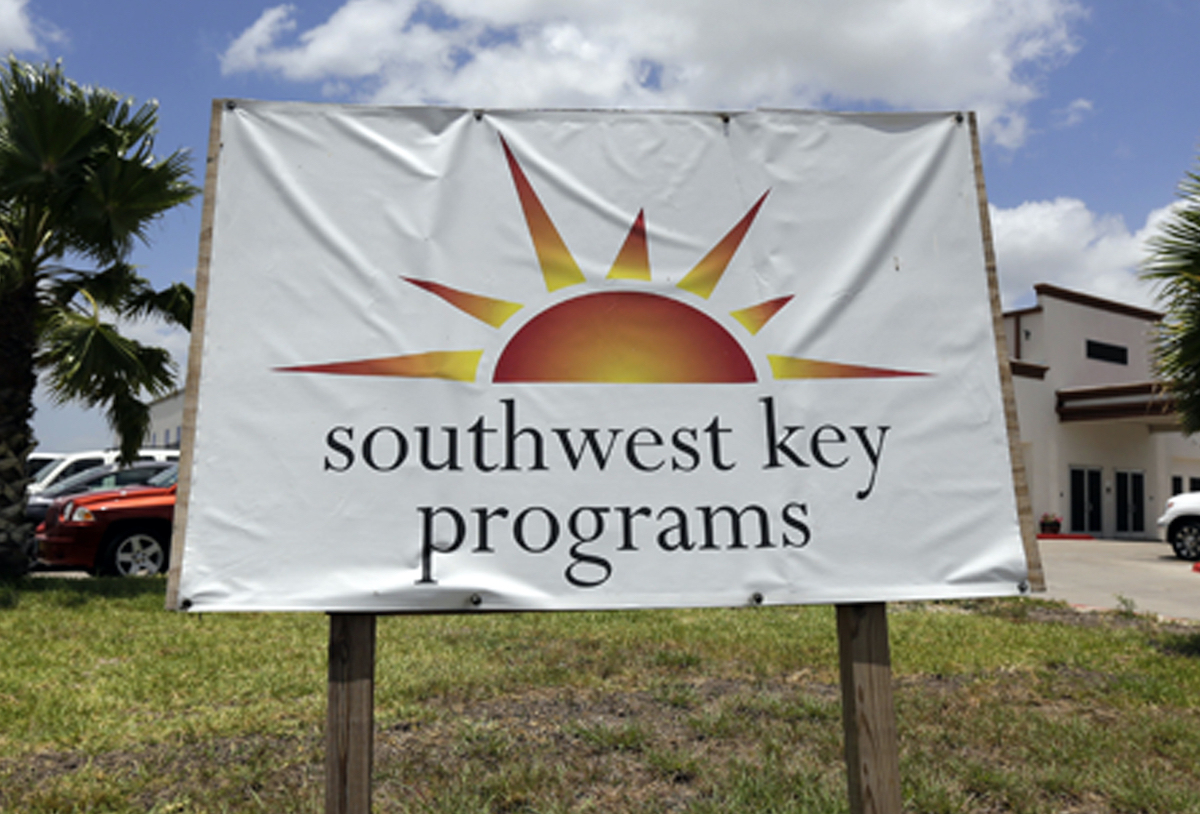 In another audit last year, the Inspector General found that Southwest Key Programs failed to establish a proper accounting system and overcharged the government by more than $13 million. The audit noted that Southwest Key “disagreed or partially disagreed with all but one of our findings and outlined actions it has taken and plans to take to address the findings.”

Under the current contract, the company provides child care and case management services at one of the new facilities in Midland, Texas.

“We know the administration is dealing with huge numbers of refugees, asylum seekers and economic migrants,” said Steve Rosenbaum, an attorney of La Raza Centro Legal who represents immigrant children in a long-running legal case over custody conditions for migrant youth. “It is trying in good faith to do the right thing, but it is almost an impossible task.”