EXPLAINER: Why Are People Protesting Across Colombia? 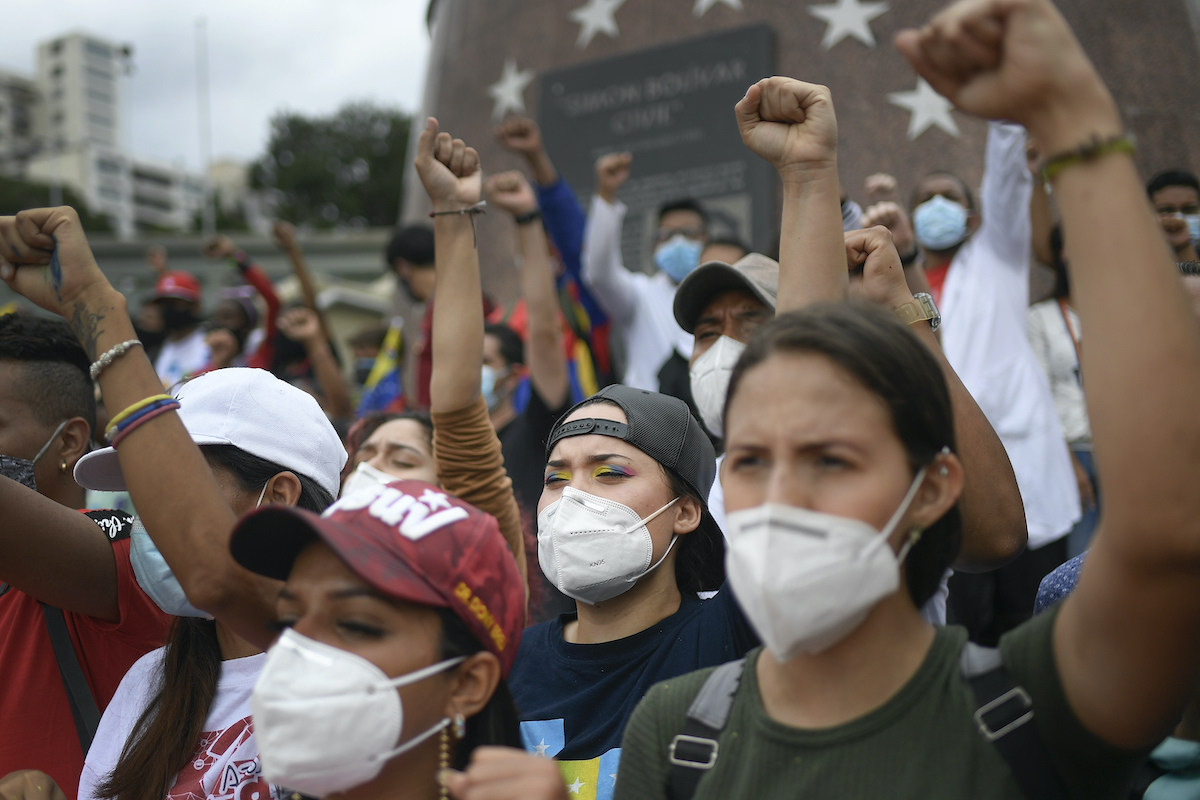 Venezuelan government supporters gather on Bolívar Avenue in Caracas, Venezuela, Saturday, May 8, 2021, during a gathering to show solidarity with the protesters in Colombia who were against a proposed tax plan, since withdrawn by the president. (AP Photo/Matias Delacroix)

BUCARAMANGA, Colombia (AP) — Thousands of Colombians have protested across the country against a government they feel has long ignored their needs, allowed corruption to run rampant and is so out of touch that it proposed tax increases during the coronavirus pandemic.

Despite virus lockdown orders, protesters have turned out in more than half of Colombia’s municipalities since last week for mostly peaceful protest against the administration of President Iván Duque. But violence during some demonstrations has resulted in 26 people dead, including a police officer, and more than 800 people injured, according to government figures.

Human rights organizations have denounced numerous police abuses and give a higher death toll, while the international community is calling for dialogue.

WHAT ARE PEOPLE PROTESTING?

The protests started on April 28 over proposed tax increases on public services, fuel, wages and pensions, but it has morphed into a general demand for the government to pay longstanding debts to the most vulnerable in society, such as Indigenous and Afro-Latino people. Even though the administration withdrew the tax reform, protests have continued and grown as reports emerged of police violence, deaths and disappearances.

Activists see a link between the current protests and demonstrations in November 2019 over a host of issues: earlier tax increases, the murder of social leaders, official corruption, inequality and compliance with a peace agreement that led to the 2016 demobilization of the Revolutionary Armed Forces of Colombia.

The discontent expressed in 2019 festered throughout the coronavirus pandemic as people saw their livelihoods disappear, their friends and family members die of COVID-19 and the government struggle to respond. Their anger has now spilled again onto the streets.

Protesters have at times erected roadblocks that officials say have led to food shortages, prevented vaccine deliveries and blocked ambulances. 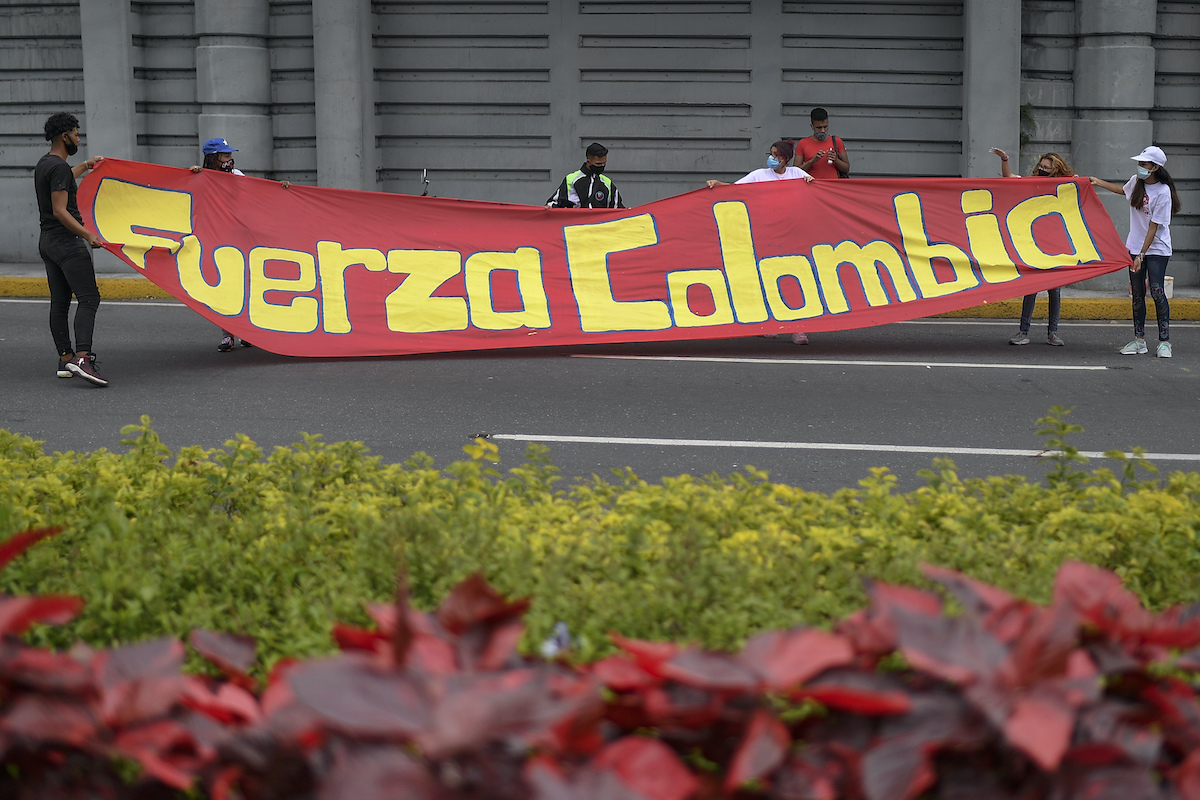 People hold a sign on Bolívar Avenue in Caracas, Venezuela, Saturday, May 8, 2021, during a gathering of Venezuela government supporters to show solidarity with the protesters in Colombia. (AP Photo/Matias Delacroix)

HOW HAS THE GOVERNMENT RESPONDED?

Defense Minister Diego Molano said security forces have tried to protect those who are peacefully demonstrating as well as those who chose to stay home.

The military has sometimes joined police since Duque on May 1 signed off on armed forces’ involvement until “the acts of serious alteration of public order cease.” That allows mayors to request the army’s presence in urban areas—a move questioned by human rights observers.

“International [human rights] standards require limiting as much as possible the use of the [military] to control internal disturbances. The soldiers are trained for armed conflict, not for citizen security,” said José Miguel Vivanco, director for the Americas at Human Rights Watch.

Duque on Thursday invited union leaders to talks. How far the dialogue can go is unclear, however, as public frustration with his government predates the now-withdrawn tax reform.

WHY HAVE SOME PROTESTS TURNED VIOLENT?

The government contends that rebel groups have infiltrated protests and drug-trafficking enterprises are subsidizing demonstrations. Duque has even classified the actions as “low-intensity terrorism.”

However, leaders of the demonstrations say security forces have been exceedingly violent and the government is stigmatizing protesters.

The epicenter of the demonstrations as well as the violence has been the southwestern city of Cali, where movements of peasants and Indigenous and Afro Latino people converge. In Cali, there is a “historical accumulation of social discontent, anger and rebellion,” said sociologist Rosembert Ariza at the National University of Colombia.

“It is a politically cultured city, and it may sound contradictory, but the exercise of violence is nothing but the response to the violence they are receiving.”

At least 500 people have been arrested in the protests, according to officials. 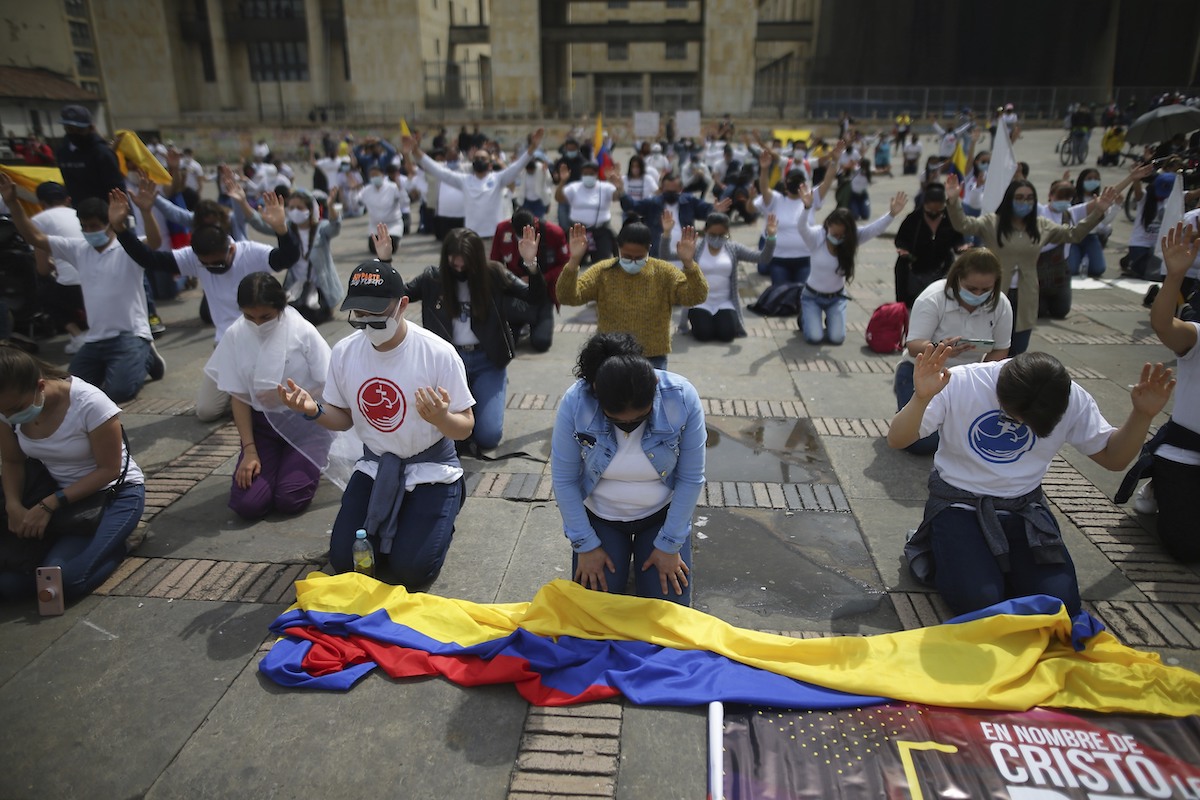 Christians kneel in prayer asking for the violence during anti-government protests to stop, in Bolívar Square in Bogota, Colombia, Saturday, May 8, 2021. (AP Photo/Ivan Valencia)

WHAT IS THE HUMAN RIGHTS SITUATION?

Martha Hurtado, spokeswoman for the United Nations High Commissioner for Human Rights, said the organization is “deeply alarmed” because it received information that in Cali the “police opened fire on protesters protesting the tax reform, killing and wounding several people.”

The Colombian agency responsible for monitoring human rights compliance reported Thursday that 26 people were killed in protests, including a police officer. The agency did not specify the number of deaths in which police have been involved. Previously, the agency alleged police involvement in a dozen.

One response to “EXPLAINER: Why Are People Protesting Across Colombia?”