Rubio Stands With Colombian President, but Other Senators Not so Sure 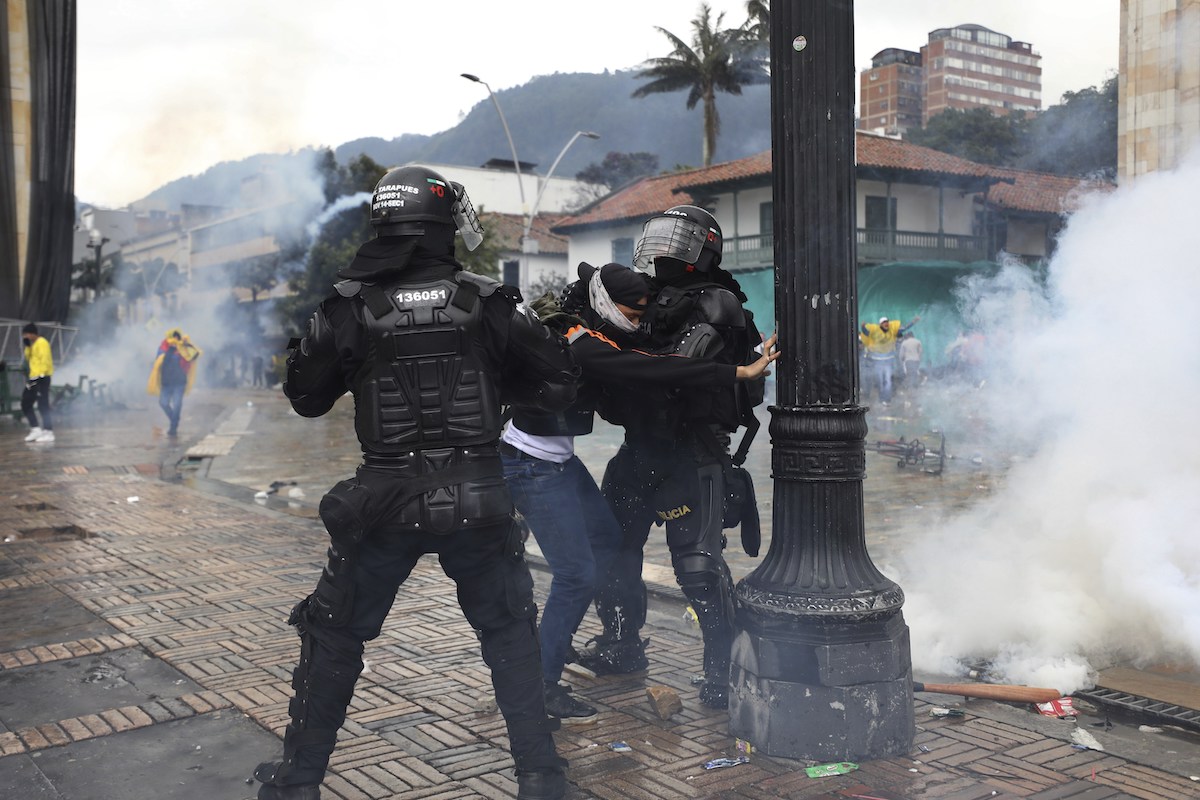 Police detain a man during an anti-government protest in Bogotá, Colombia, Wednesday, May 5, 2021. (AP Photo/Fernando Vergara)

WASHINGTON, D.C. — Senators returned to Capitol Hill on Monday for votes after a week away on recess that saw a spate of violent unrest and extrajudicial killings reported by news media and non-governmental organizations in Colombia.

Latino Rebels asked some senators on Monday afternoon at the Capitol if the United States should reconsider its relationship with Colombian President Iván Duque Márquez, who has been criticized for his lack of response towards the violence but has also called for dialogue with national strike leaders.

Other senators were not so sure.

“There are some, unfortunately. growing issues in Colombia,” said Senator Ron Johnson (R-WI), when asked about the $800 million in annual aid the United States sends to Colombia. “I think we should be taking a look at where we send money. We sometimes don’t do a very good job at that. Government sending taxpayers dollars abroad needs to be more careful with it.”

“We should be looking into all of our relationships, in particular those where violence is a continuing problem,” Senator Elizabeth Warren (D-MA) said.

Proposed tax reforms to make up for lost government revenue during the pandemic shutdown of the national economy have sparked a national strike in Colombia in the past few weeks that has led to police brutality, including extrajudicial killings of unarmed protesters, according to reports by media and NGOs operating on the ground in Colombia. As a result of the protests, the Duque administration has formally withdrawn the tax reform proposal. Nonetheless, over 1,800 cases of police violence have been reported since the marches began on April 28, according to Temblores, a Colombian NGO that monitors the nation’s police.

“I have asked for a briefing,” said Senator Bob Menendez (D-NJ), chair of the powerful Senate Foreign Relations Committee. “I want to get my own information and then I’ll make a decision.”

Colombia is a close partner and ally whose stability and success is in the national interest of the U.S. I urge Colombian authorities and stakeholders to deescalate & create space for real dialogue to settle political differences and chart a better course for their country. https://t.co/g5x2ZcLSgQ

“We have bilateral relations like that I think are being reviewed by the [Biden] administration,” said Senator Bob Casey (D-PA), another member of the Senate Foreign Relations Committee. When asked if the White House or State Department has offered a briefing on the rising violence in Colombia, Senator Casey said: “Not that I’m aware of, though I’d certainly like to hear their view before I make a judgment on that.”

“That’s obviously a very serious issue,” said Senator Hickenlooper (D-CO) of the alleged rise in extrajudicial killings of unarmed protestors by Colombian police. “Let me read up on it.”

“I don’t have enough information” on the situation in Colombia, said Senator Rand Paul (R-KY). “I just hate to give you something off the cuff when I’m not up to speed.”

One response to “Rubio Stands With Colombian President, but Other Senators Not so Sure”