Firelei Báez in her Bronx studio, wearing an Akris jacket, surrounded by her epic art, all works in progress. (Photograph by Sunny Leerasanthanah © 2021 Jasmin Hernandez)

Before the pandemic hit and our entire world shifted, there was an important conversation happening around the need to support Latinx artists and creators—particularly those from Black and Brown communities in the United States. A New Yorker article shared critiques of NYC’s El Museo del Barrio claiming it was no longer of the people; in higher education, a debate was ensuing about the need for Ethnic Studies amid two Latinx professors being denied tenure at Harvard and Yale; and in Hollywood, Latino representation is still lagging.

Earlier this year, a book was published that is creating a dent in this lack of representation. “We Are Here: Visionaries of Color Transforming the Art World” is a powerful piece of work celebrating Black and Brown creators, of diverse backgrounds. The book is a colorful and vibrant acclamation to 50 artists whose work captures the voices in our communities—featuring interviews with each creator.

It was curated by Jasmin Hernandez, the founder of Gallery Gurls—a space that has already been dedicating itself to highlight Latinx artists.

We asked Hernandez a few questions about “We Are Here,” including her process for bringing this work to us, and what her hopes are for this book.

“Readers and reviewers just keep saying how they’ve never seen a design or inspiration book with living BIPOC artists and art workers of this magnitude in one book,” she said. 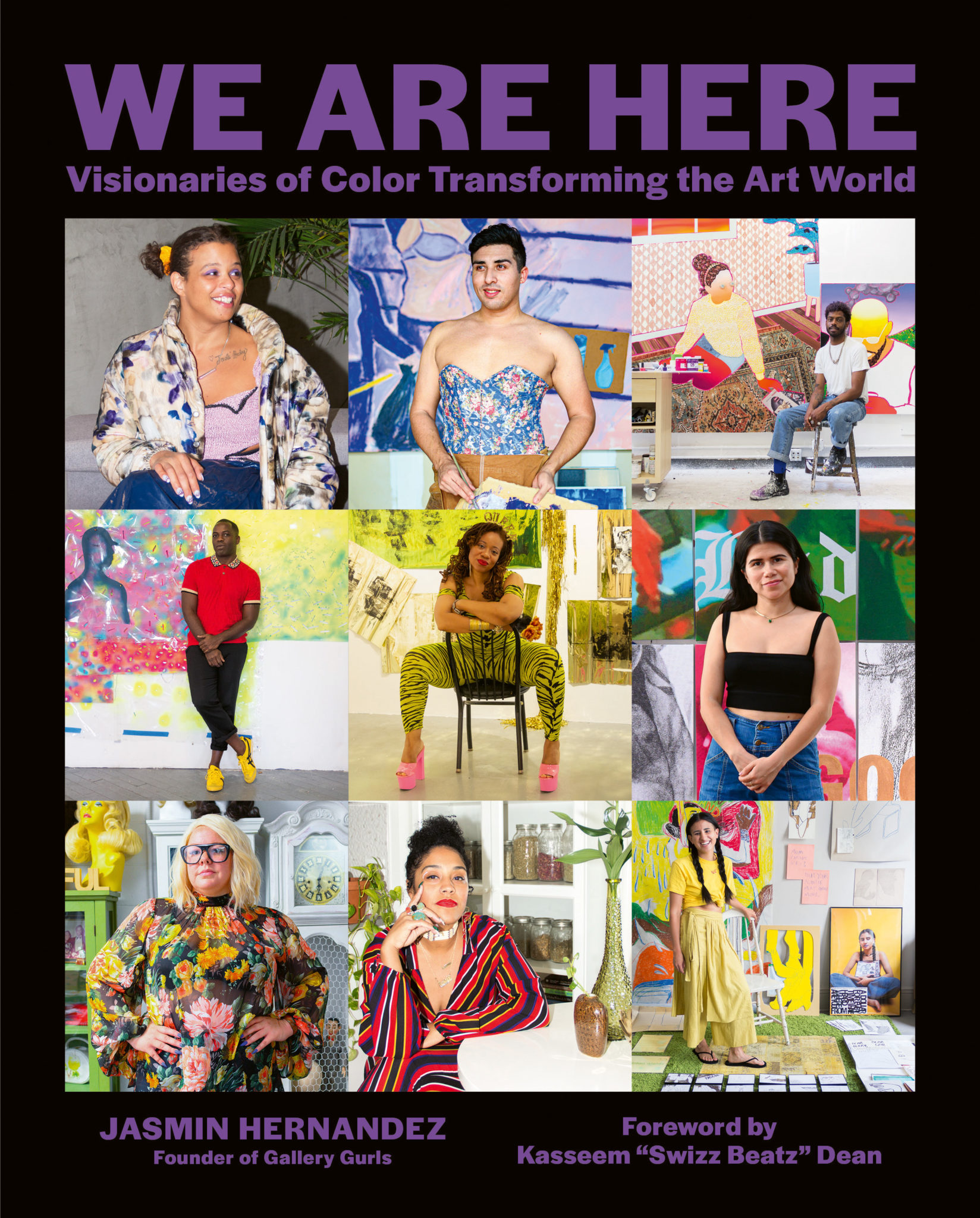 See more of what she has to say as well as some images featured in the book, below:

Latino Rebels: You have been working on Gallery Gurls for quite some time, how is this book connected to the mission of that platform?

Jasmin Hernandez: My debut book “We Are Here” is basically Gallery Gurls in print. It carries the same non-academic, approachable, super accessible way to engage with art. Any reader with any level of knowledge of contemporary art can dive right in and learn about these 50 BIPOC and QTBIPOC artists and art workers. The book centers and prioritizes Black and Brown folx of all identities shaping contemporary art. Readers can learn from the 50 blueprints being presented.

LR: “We Are Here” is such an important project highlighting Latinx art. What can you tell us about this book and your inspiration behind it?

JH: It was important to showcase and focus on dynamic Latinx and Black Latinx artists and art workers of our time. Queer artists like Luna Luis Ortiz, Gabriel García Román and David Antonio Cruz. Black Latinx cultural workers like Suhaly Bautista-Carolina, gallery owners and art fair entrepreneurs like Danny Báez, and really dope Dominican-American womxn artists like Indie 184 and Uzumaki Cepeda. This book is really the first of its kind, a book offering curated intimate interviews paired with unique exclusive photography (never to be seen anywhere else), revealing everyone’s creative process, where they speak honestly and frankly about being Black and Brown in the art world, and how each of them are taking up space unapologetically. I wanted readers to hear from them directly and feel the impact.

LR: What was your process of putting this work together?

JH: I hired two amazing Black and WOC photographers, Jasmine Durhal (LA) and Sunny Leerasanthanah (NYC), to shoot the entire book. It was crucial that the people behind the lens looked like the people in front of the lens. All 50 subjects were shot over three months in 2019, which was before COVID-19 and a blessing. I commissioned Jasmine to shoot all the LA subjects and she did an outstanding job. In New York, I attended every shoot (to art direct) and Sunny photographed 5-6 people a day. This was during my days off,  while I balanced a part-time retail job. It was physically grueling and taxing, since I had no assistant or intern. I wrote, edited, researched, fact-checked all 50 interviews (along with my amazing editor) and helped with final image selection. When lockdown happened in March 2020, I was in full-on editing mode, so I was just home working and doing the final edits. That was the easy part. 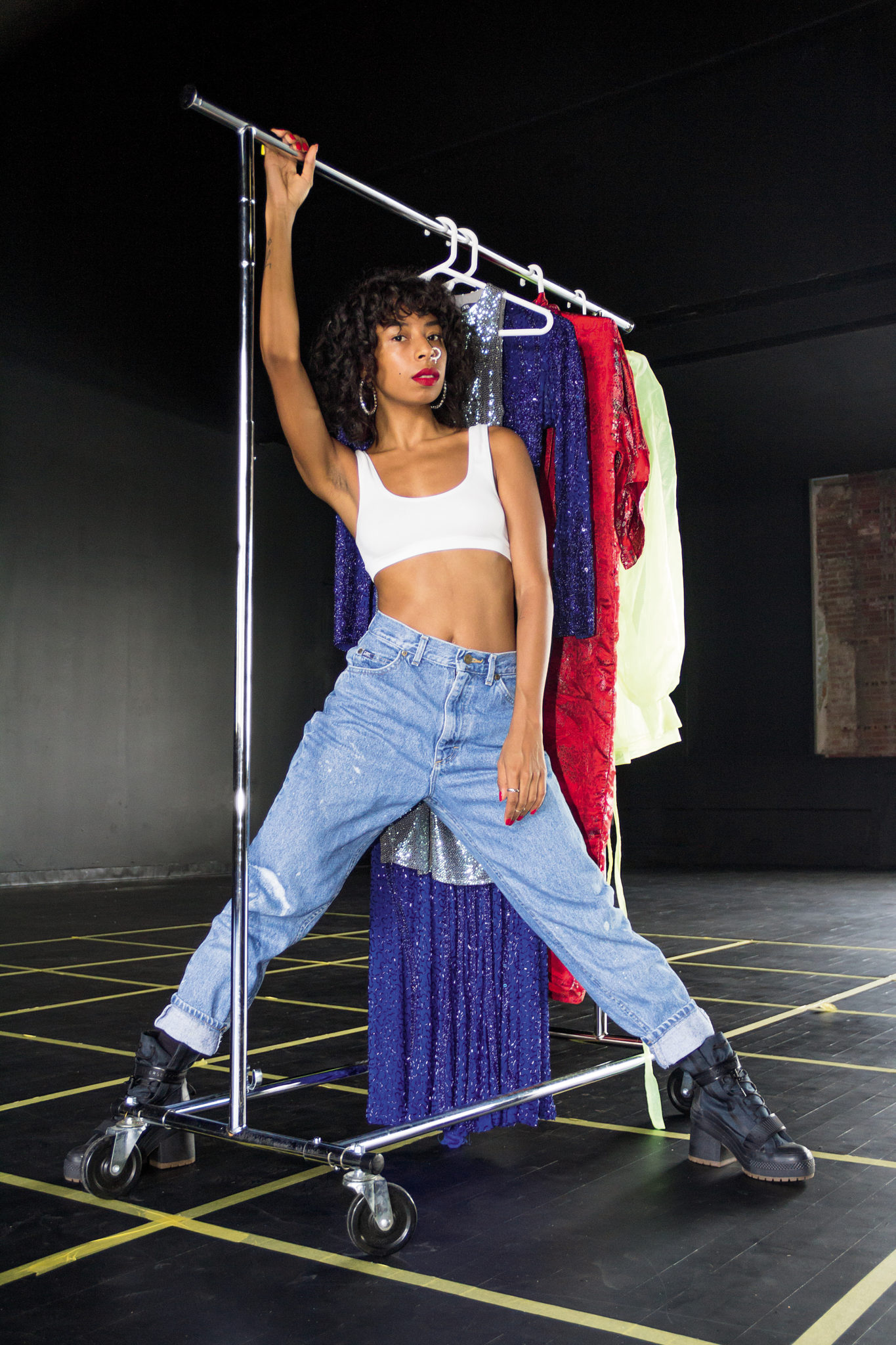 LR: Was there anything you learned while working on this book, whether about the Latinx art world, or even about yourself, that surprised you?

JH: A lot of subjects in the book, who maybe knew each other (or didn’t) answered many questions similarly. They specifically loved yellow or purple or “iridescent” hues as their favorites colors. A lot of Black Latinx and Black womxn subjects used Octavia Butler quotes or cited characters from her novels as their favorite characters. There were also so many internal relationships amongst the artists within the book, I didn’t know about. Some mentors/mentees were in the book together, or in the case of Jamea Richmond-Edwards, the first time she ever saw art by a Black womxn artist in a museum, it was Renee Cox, back when she was a teen in the nineties. Now two decades later they’re in a book together. All of these parallels just speak to their collective brilliance and synchronicity.

LR: This book relies a lot on the visual elements: the images, the design. What was the publication process like?

JH: I had great freedom and input with the book, this book isn’t a watered-down version. It’s very very reflective of the subjects’ answers. The visuals are very key and crucial, so a big effort and emphasis was placed to elevate the images to the most superior level. Sunny and Jasmine did an excellent job at shooting really vibrant, breathtaking, and lush images. They also don’t know each other and somehow managed to keep the visual tone of the book fluid and cohesive. Nothing is off. Abrams’ in-house designer did a great job at keeping everything clean and minimal, since the images of the subjects, their art, their studios/spaces, and materials, was going to make the pages pop with color. I’m really proud we used two fonts (Halyard and Corundum) in the entire book by the first ever Black typeface designer named Joshua Darden.

LR: What has the reception to the book been like? Has there been any comment or reaction that has moved you?

JH: Really phenomenal. The book has received an outpouring of love online. Universally, readers and reviewers, just keep saying how they’ve never seen a design/inspiration book with living BIPOC artists and art workers of this magnitude in one book. That’s very fulfilling to me to hear that. I hope to turn “We Are Here,” into a series, that’s my goal. 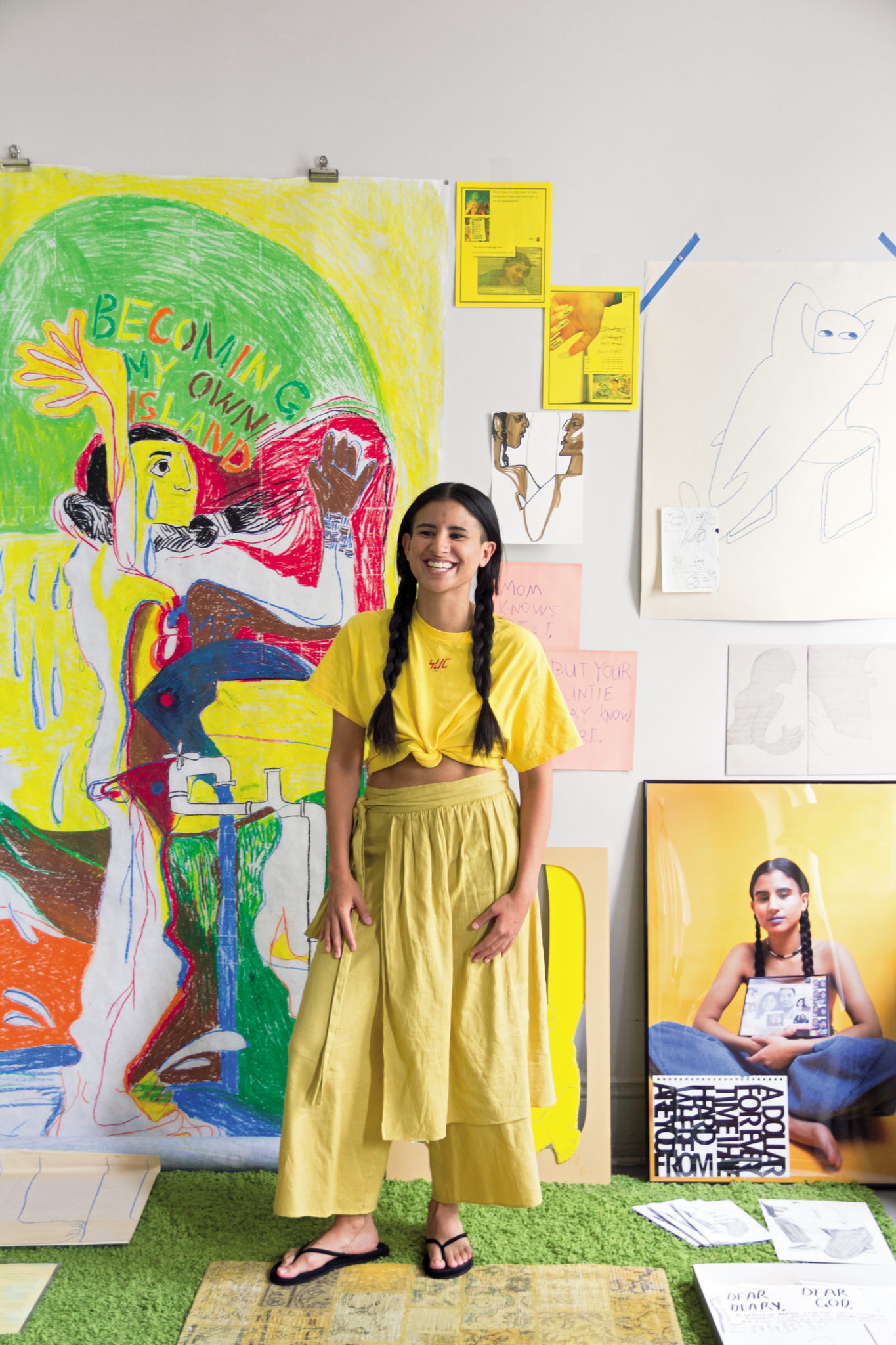 KT Pe. Queens, New York, standing in front of their oil pastel, Becoming My Own Island (2019), and excerpts from their multimedia installation Entries to Faustina (Growing out of colonialism for my grandmother’s sake) (2018). (Photograph by Sunny Leerasanthanah. © 2021 Jasmin Hernandez)

LR: What was it like working with the artists included in this book? What has their reaction been to the final product being out?

JH: Also overwhelmingly positive. Just really really joyous. There’s a collective appreciation that this work was done, to specifically center Black and Brown artists, curators, art workers, cultural producers. “We Are Here” is in conversation with other amazing books as well that center BIPOC artists. I included many folks I already knew and had written about like Patrick Martinez, but I also approached artists I hadn’t even met before like Felipe Baeza, Jay Lynn Gomez, or longtime IG crushes that I’ve followed for years but still hadn’t met like Gabriella Sanchez or Rick Garzon. I wasn’t afraid to approach anyone and felt like the vibe was right.

LR: What do you hope readers get from “We Are Here?”?

JH: There is room for Black and Brown artists in contemporary art. It’s an undeniable fact. There are many paths, you don’t have to be a painter or photographer, you could start a collective, or curate. There are 50 narratives presented in the book to learn from. Disrupt and elbow your way in. Use social media and the internet. Skip gatekeepers. Start a small project space with your homies, that’s indie, and low-maintenance. Or go nomadic. Or go completely virtual. Find and connect with your BIPOC tribe online, and share resources. Don’t settle for a milk crate at the gatekeeper’s table, but build your own instead.

Amanda Alcántara is an award-winning freelance journalist and former digital editor for Futuro Media. Originally from the Dominican Republic, she is also the author of Chula. Twitter: @YoSoy_Amanda. Instagram: @yosoy_amanda.