Ex-Official in Bolivia Charged for Bribes in Tear Gas Deal 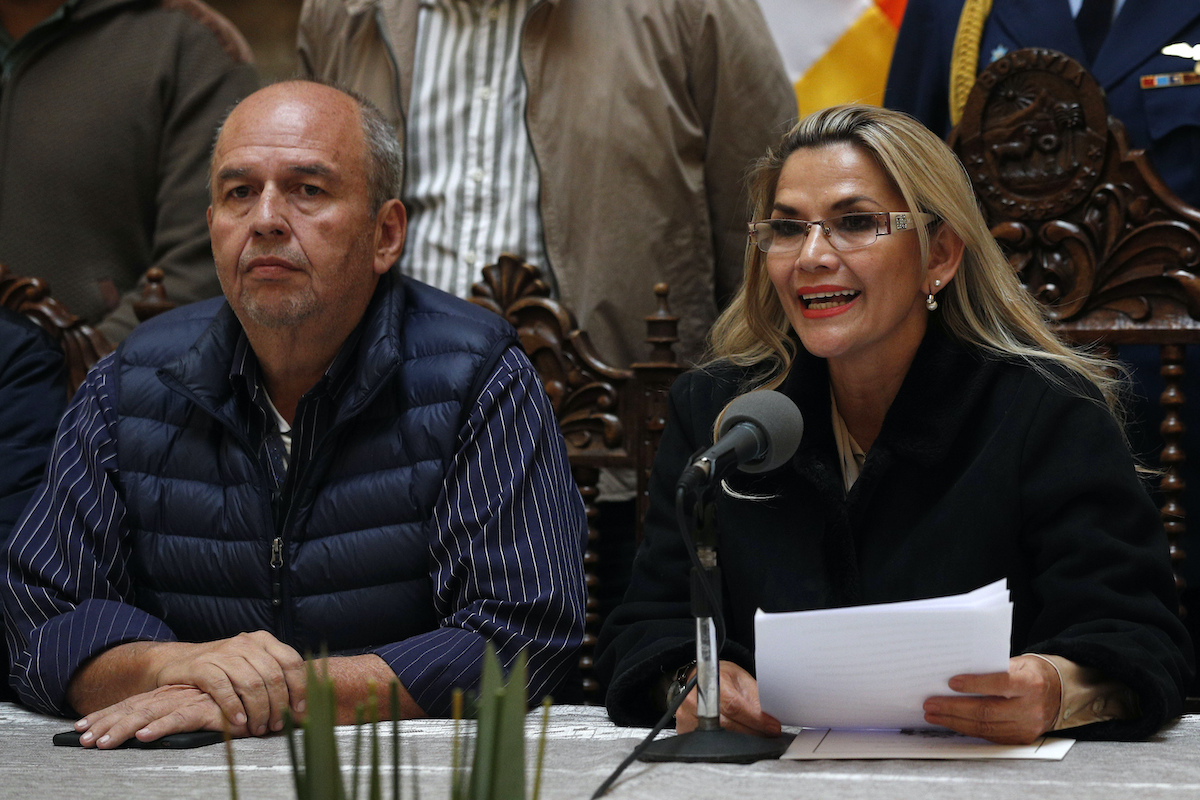 In this November 23, 2019 file photo, accompanied by Government Minister Arturo Murillo, Bolivia’s interim President Jeanine Añez speaks during a press conference at the presidential palace, in La Paz, Bolivia. According to a US Department of Justice statement on Wednesday, May 26, 2021, Murillo has been arrested in the U.S. for allegedly taking part of $602,000 in kickbacks from Florida-based businessmen accused of selling tear gas at inflated prices to the government of former interim President Añez. (AP Photo/Juan Karita, File)

MIAMI (AP) — Bolivia’s former interior minister has been arrested in the U.S. for allegedly taking part of $602,000 in kickbacks from Florida-based businessmen accused of selling tear gas at inflated prices to the conservative government of former interim President Jeanine Áñez.

Arturo Murillo was charged with a single count of conspiring to commit money laundering, according to a Department of Justice statement on Wednesday.

The Associated Press previously reported that Murillo’s former chief of staff had been arrested as part of the investigation along with the owner of a Florida-based supplier of police and military equipment and his father, who press accounts indicate was charged two decades ago in Bolivia with weapons smuggling.

Murillo, 57, was one of the most outspoken voices in the Áñez government that took power in November 2019 after President Evo Morales stepped down amid violent protests disputing his reelection to a fourth straight term.

He has a long history of far-right provocation. As a congressman, he supported a ban on abortion by once telling women that they should commit suicide by jumping from a five-story building if they wanted to terminate a pregnancy.

As interior minister, he referred to opponents as “narco-terrorists,” brought charges against Morales for sedition and led the deadly police response against protesters that drew rebuke from international human rights groups. He also bragged about meeting with the CIA when he traveled to Washington to meet with senior officials in the Trump administration who initially viewed Áñez’s ascent as an opportunity to improve bilateral relations that turned hostile under Morales.

But the crackdown on Bolivia’s left backfired, and almost a year later, Morales’ ally, Luis Arce, was elected and proceeded to lock up Áñez and other officials tied to her short-lived rule.

On Wednesday, his successor as Interior Minister, Eduardo del Castillo, said the Arce government would ask the U.S. to extradite Murillo and Sergio Méndez, his former chief of staff, so they could face justice at home. Bolivian authorities also arrested a relative of Murillo as he was withdrawing money and valuables from a security deposit box at a bank in the city of Cochabamba held in Murillo’s name, according to press reports.

“Murillo became the key force behind the de facto govt’s repression,” said Kathryn Ledebur, director of the Bolivia-based Andean Information Network. “His arrest is an important message that rampant corruption and abuse cannot be tolerated by the international community.”

According to investigators, Murillo, Méndez and another unnamed co-conspirator in the Defense Ministry helped a Florida-based company obtain a $5.6 million contract to supply tear gas and non-lethal equipment to the Áñez government.

The company was allegedly owned by Bryan Berkman, a dual Bolivian-American national who purchased the tear gas in Brazil for a much smaller sum of $3.3 million, according to an affidavit from a Department of Homeland Security agent that accompanies the complaint. Part of the profits allegedly were used to coordinate the bribe payments, some of which were to be paid from a delivery of $700,000 in cash to Bolivia.

While the American company is not named in the complaint, Berkman is the chief executive of Taramac-based Bravo Tactical Solutions, according to Florida’s corporate registry. His father, Luis Berkman, who was also arrested and charged, runs a separate Tamarac-based company called International Defense Group.

Bolivian press reports indicate that the older Berkman was arrested on weapons trafficking charges in 2001, accused of heading a criminal ring that tried to smuggle military assault weapons to Paraguay. He was declared a fugitive in 2013 without having been found guilty, according to a Bolivian judicial filing.

According to the complaint, evidence compiled from text messages, emails and bank records show that Méndez was asked by a co-conspirator to write a letter to the Brazilian tear gas manufacturer insisting that Bolivia’s government would only purchase its products via the Berkman-owned company.

On Jan. 13, 2020, Bolivia’s Central Bank attempted to wire transfer $5.6 million to a U.S. account belonging to the Berkman-owned company. On the same day, Murillo met Bryan Berkman in Miami and opened a bank account with a $10,000 deposit.

However, the wire transfer from Bolivia’s government was rejected, prompting Méndez to send an email from his government account to the U.S. bank to try and clear the transaction.

Once blocked, the alleged co-conspirators tried a few weeks later with a different U.S. bank.

“Help me with the payment please,” the elder Berkman wrote in a text message to Murillo, who responded, “We’re all going to meet at the Ministry of Economy at 7:30 tomorrow and the go-ahead will be given.”

An attorney for Murillo did not immediately respond to a request for comment.