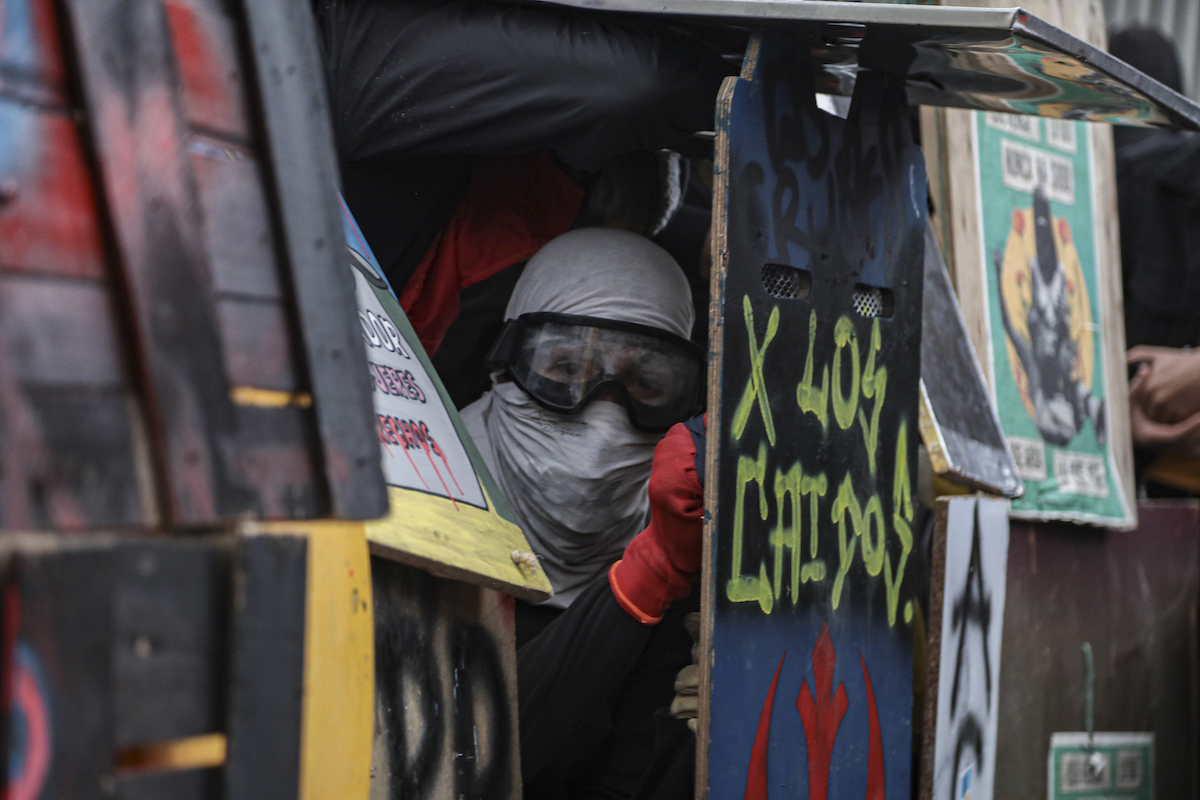 A young man from the First Line, about to resist the ESMAD, Bogotá, Colombia, May 17, 2021 (Photo by Alejandro Gómez)

All photos by Alejandro Gómez

In Colombia, there are many reasons to do so.

Since the protests broke out on April 28, according to official sources, 89 people have disappeared and there have been at least 43 people killed.

“What motivates many people is the lack, not even ours… it is the lack of others and that nobody does anything,” 20-year-old Marco says from a park. His face is covered with a hood. Police motorcycles occasionally pass through the park. Along with a group of young students, Marco organized into a group called Escudos Azules to protect the mobilizations and hold the front line against the police’s mobile anti-riot squad (ESMAD in Spanish).

According to DANE figures, 42.5% of Colombia’s population lives on less than $100 a month—about 21 million people. The rest are not rich. Inequality is also a punishment. According to OXFAM, Colombia’s richest 1% owns 81% of the land. 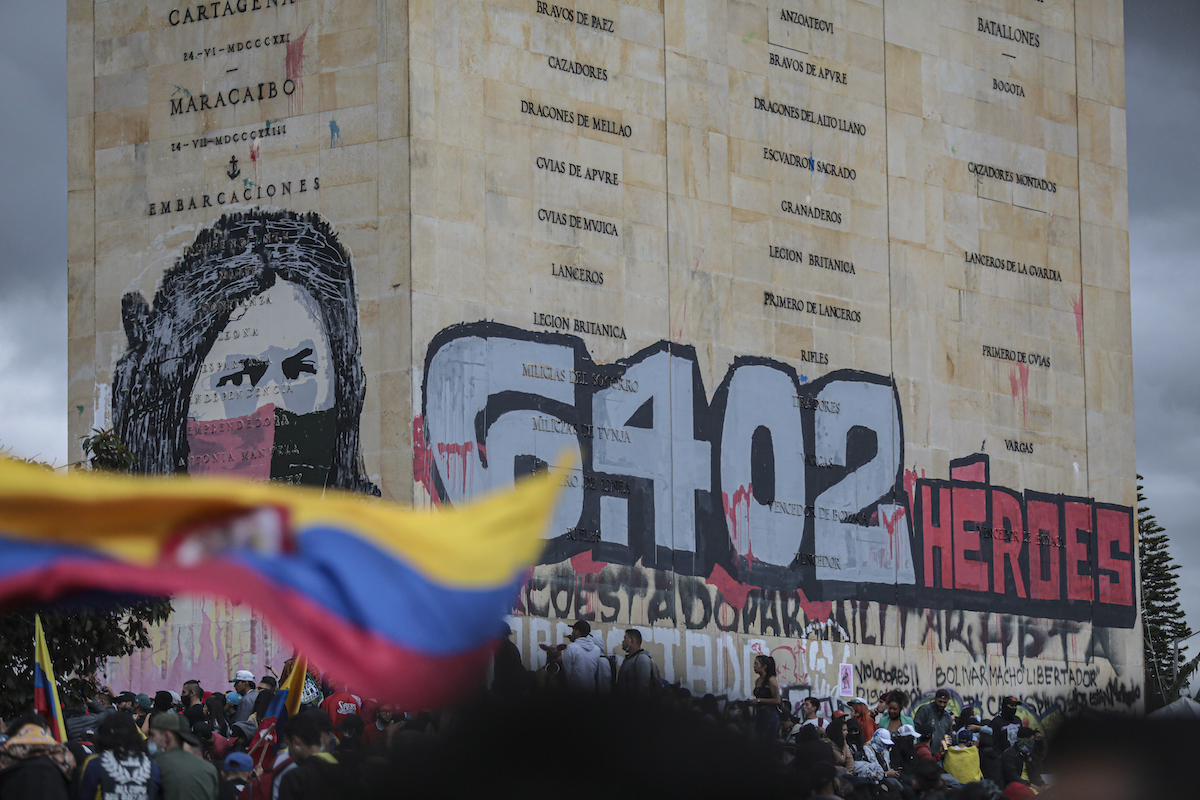 Demonstration at the monument to Los Héroes, Bogotá, Colombia May 15, 2021 (Photo by Alejandro Gómez)

Faced with social demands, the government has responded with police brutality.

“People are on the streets because they realize what is happening, what is killing them right in their faces,” Marco explains.

Civil organizations call for help from the Inter-American Court of Human Rights (IACHR), but so far the Colombian government has not authorized their entry into the country.

Violence has a deep history in Colombia. The armed conflict that was deactivated in 2016 —where land tenure was one of the causes— left more than 200,000 people dead and 80,000 missing. In addition, the government of Iván Duque has not fully complied with the peace agreement that sought to make structural adjustments to the state. The result has been more and more violence.

For Marco, a middle-class young man who attends university, the reality of why the protests are occurring has never been clearer. 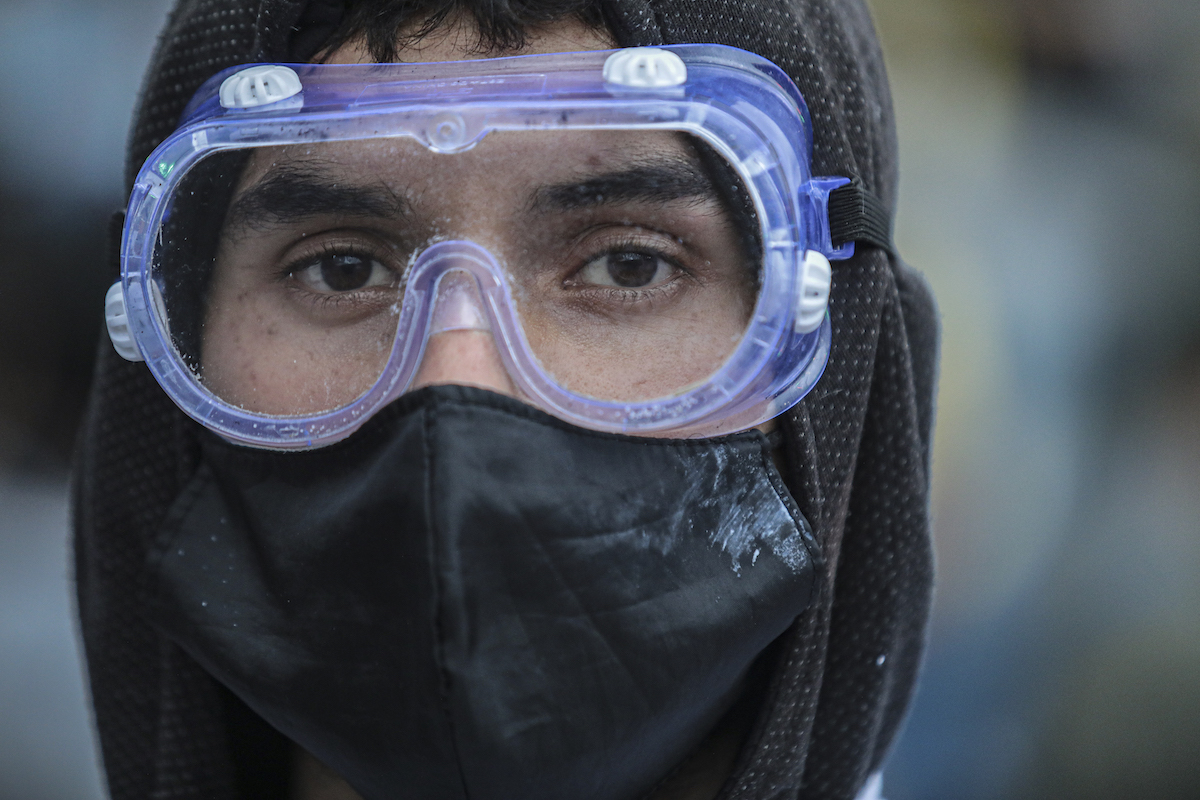 Portrait of Marco, a member of the Blue Shields and part of the First Line. Bogotá, Colombia, May 17, 2021 (Photo by Alejandro Gómez)

On November 21, 2019, Duque rang the first warning bell. Unions had called for a national strike due to discontent over economic and social policies, as well as the risk hanging over the peace agreement. Soon, the army had bombed presumed FARC dissidents who did not accept the peace. It was later revealed that at least eight forcibly recruited children died in the operation.

It was the final straw.

Different sectors joined and took the streets. On November 23, 2019, 18-year-old Dylan Cruz, who was protesting the right to access to higher education, was killed in Bogotá by an ESMAD agent.

His death inflamed the protests that have continued up to now, even in the middle of a pandemic.

Simona is one of Marco’s partners on the Front Line. After Cruz’s death, he joined the group. Wearing construction helmets and shields made of any material they find, people like Simona aim to protect the demonstrations. Like her, many women have joined to resist the dangerous anti-riot squad, an institution created in 1999 during the conflict  —within the framework of Plan Colombia with the United States— and which at least has 30 killings to its credit. 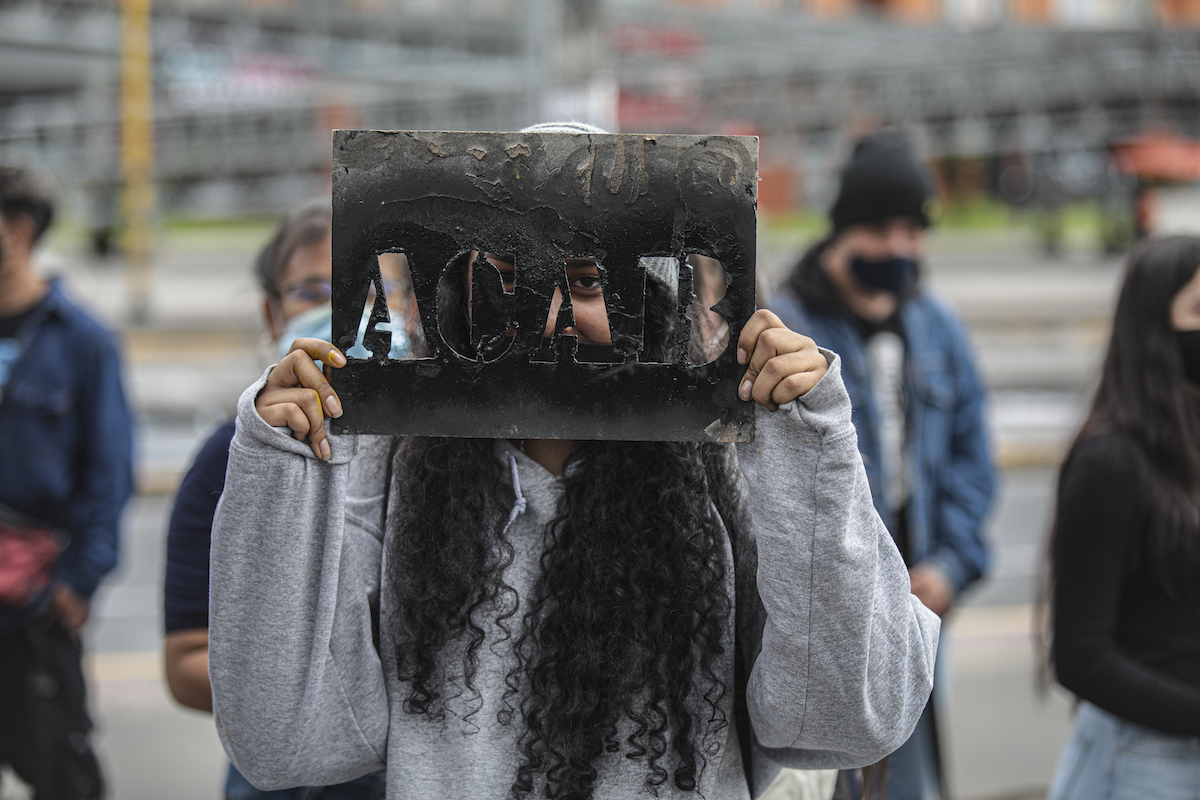 A young woman holds a sign that has the acronym ACAB (“All Cops are bastards”), Bogotá, Colombia May 15, 2021 (Photo by Alejandro Gómez)

For Simona, the First Line goes beyond the shields that stand between the police and those who demonstrate.

“The First Line are the first aid brigades who save people’s lives in a march, the human rights defenders who risk it all, the mothers who bring water to the protesters in the streets or who open the door of their houses for those who ran away from ESMAD,” Simona says.

She adds that even for a woman it is more complicated because there is a latent risk. According to the NGO Temblores, between 2017 and 2019 there were 108 alleged cases of rape by police. And this year there are already 22 alleged cases of sexual abuse.

“This is the risk that any woman who decides to go out on the streets faces. That a possible encounter with the police can end in rape,” Simona says. 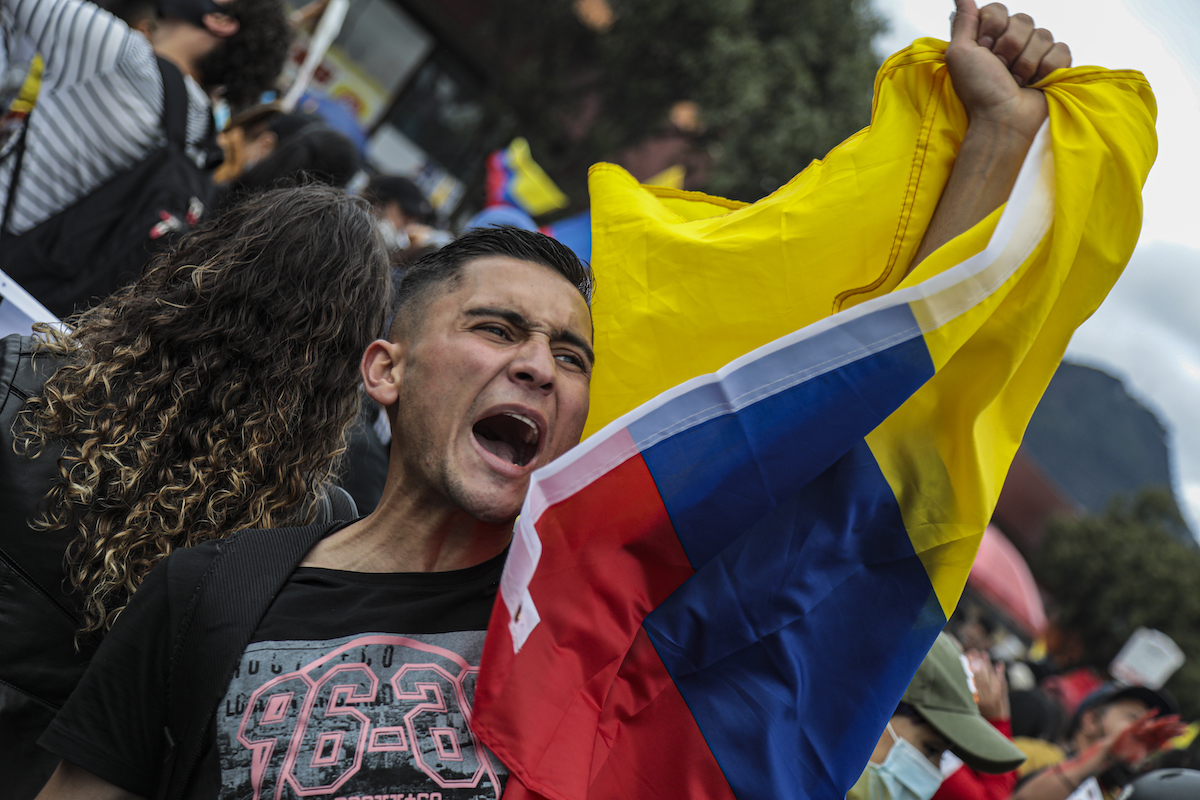 A protester at monument to Los Héroes, Bogotá, Colombia May 15, 2021 (Photo by Alejandro Gómez)

The Colombian government is betting on the protests dissipating and has sat down to negotiate with members of the 2019 union committee. But many of the young people who are on the streets of Cali, the southern parts of Bogotá or Medellín have their own demands.

“You risk your life for a stranger who considers himself a dreamer and wants to build a better country,” Simona says.