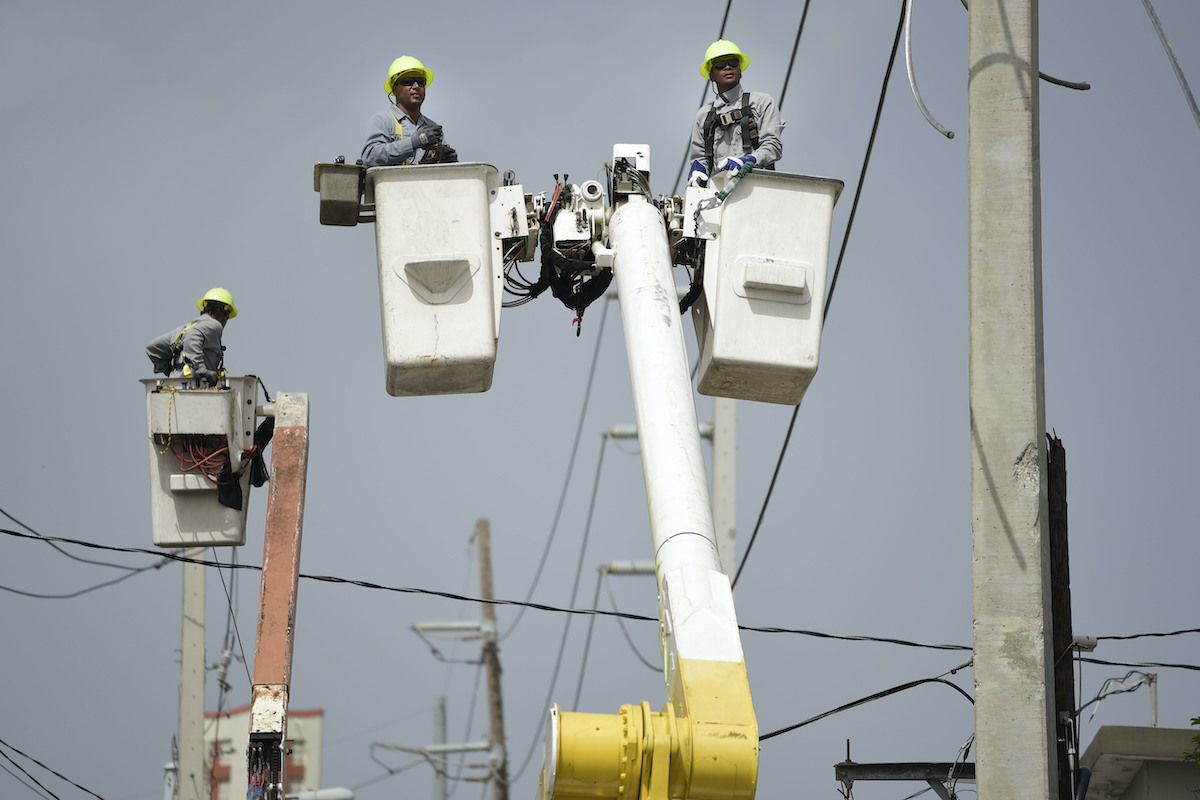 SAN JUAN, Puerto Rico (AP) — A private company on Tuesday took over the transmission and distribution operations of Puerto Rico’s power authority, which has struggled with blackouts and bankruptcy, corruption and mismanagement.

The takeover by Luma Energy under a 15-year contract coincided with the beginning of the Atlantic hurricane season, with many across Puerto Rico worried about the transition and whether the new company can handle a severe storm. The U.S. territory is still struggling to recover from Hurricane Maria, which destroyed most of the power grid in September 2017.

“It is extraordinarily fragile and in very poor condition,” warned Wayne Stensby, CEO of Luma, a consortium made up of Calgary, Alberta-based Atco and Quanta Services Inc. of Houston.

However, Stensby said the company, which will serve all of the island’s roughly 1.5 million clients, has enough resources to handle a Category 2 hurricane and can bring in more equipment and workers if a stronger storm hits.

The agreement approved by the territory’s government and a federal control board calls for Luma to spend billions of dollars in upgrading the battered system —with most of that money coming from the U.S. Federal Emergency Management Agency— while receiving hundreds of millions of dollars for managing the system.

Officials are betting the private operator can do better than the island’s Electric Power Authority, which has struggled to restore the storm-battered electrical grid and keep power flowing while trying to cope with $9 billion in debt—more than that of any other government agency in Puerto Rico.

Even with privatization, most analysts expect the government and control board will be forced to agree to an eventual power rate increase to meet the demands of bondholders.

Meanwhile, the new company will inherit unresolved blackouts, with more than 30,000 customers left without power in recent weeks.

Puerto Rico chose Luma in June 2020 to operate and modernize the island’s transmission and distribution system.

Gov. Pedro Pierluisi said the company has pledged to reduce power interruptions by 30%, the length of outages by 40% and cut workplace accidents by 50%.

“We’ve had a bankrupt… [and] incompetent public utility for too long,” he said. “The transformation that is underway will make a difference.”

But critics have called on the government to cancel the deal. A Texas-based nonprofit, the Institute for Energy Economics and Financial Analysis, complained that Luma would not be penalized for failing to save money or meet renewable energy goals.

It said the control board “is turning a blind eye to some of the same fiscal practices that led the commonwealth into bankruptcy,” wrote Tom Sanzillo, the nonprofit’s director of financial analysis. “These include politically driven contracting processes, poorly documented cash transfers between commonwealth entities, lack of clarity and accountability for budgetary savings initiatives, failure to prioritize renewable energy and costly and shortsighted labor management.”

The Puerto Rico-based Center for a New Economy, a nonpartisan think tank, also criticized the deal, saying, “There are no guarantees that the process to modernize and transform (the electric authority) will be successful.”

In addition, some 20 unions representing thousands of Puerto Rican workers ranging from teachers to truck drivers announced on Tuesday that they would go on strike if the Luma contract is not rescinded.

Stensby, Luma’s CEO, said he was perplexed by that development: “What are they fighting against?… How can you fight against better customer service and better electricity?”

Meanwhile, the federal board said the effort must go forward. If the Electric Power Authority is not transformed, the economy will shrink, said David Skeel, the board’s chairman.

“Some people are not happy with it, but it is the way forward,” he said of the contract. “It is absolutely essential, in my view.”

Puerto Rico’s power generation units average 45 years old, twice those of the U.S. mainland, and a fiscal plan approved by the federal board foresees Luma spending some $3.85 billion through fiscal year 2024 to revamp the grid’s transmission and distribution system.