OPINION: The Racialization of Violence in Colombia 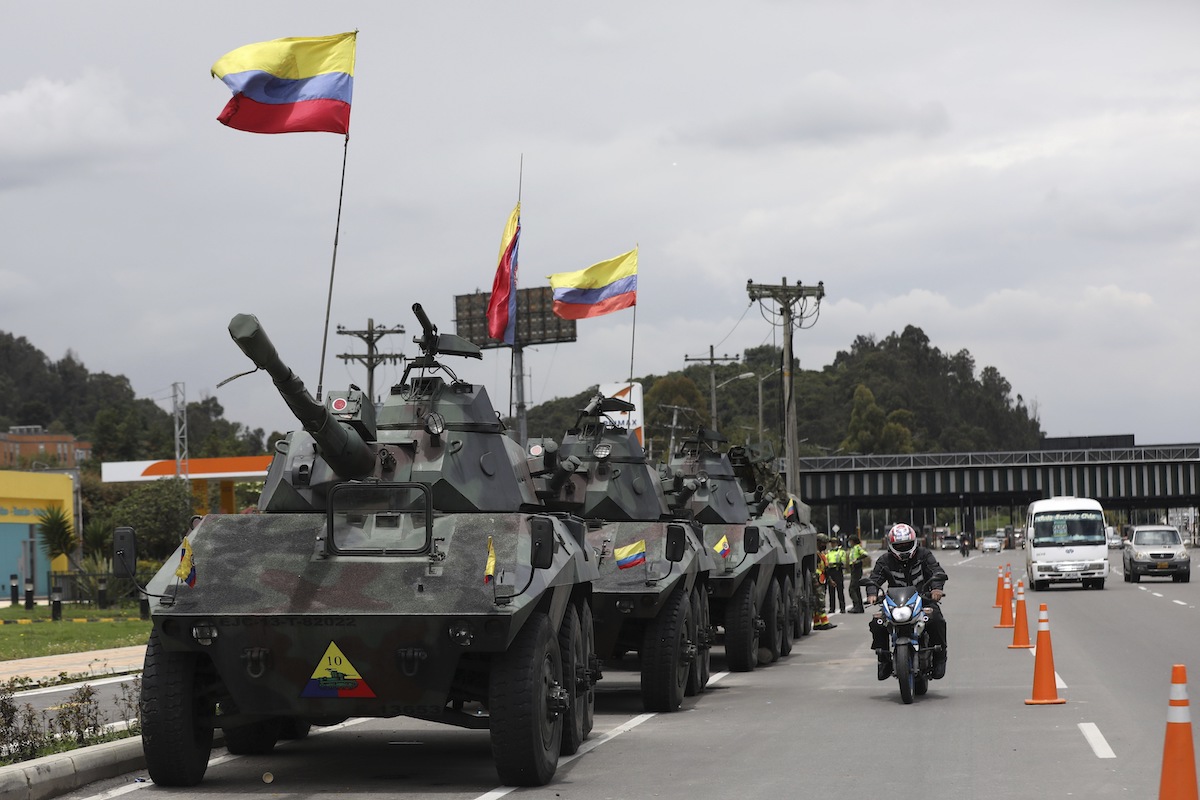 Soldiers and army tanks guard toll booths on the outskirts of Bogota, Colombia, during the month of May, 2021. (AP Photo/Fernando Vergara)

On the afternoon of May 9, armed men in a wealthy part of Cali, Colombia’s third-largest city, opened fire on a blockade that the Regional Indigenous Council of Cauca (CRIC is the Spanish acronym), one of Colombia’s largest Indigenous organizations, set up as part of the National Strike that has rocked the country since April 28. The men got out of a pickup truck and began firing on protesters while a police officer stood by and watched, raising suspicions that they were collaborating with security forces.

This event was followed by various attacks against mostly Indigenous protesters. In one of the attacks, a vigilante ran over protesters with a Mazda, eerily similar to the attack carried out by white supremacist James Alex Fields in Charlottesville in 2017. Since then the tactic of running over protesters has been used by vigilantes in other parts of Colombia.

At the end of the day, at least nine members of the CRIC were wounded by vigilante violence. Yet the media and the government did not sympathize with the protesters attacked that day instead they chose the side of the self-described gente de bien (good people), those who want things to return to normal, and the protests to stop interrupting their lives.

In response to the attack, President Iván Duque made a televised statement that night. Duque clearly defined which side of the conflict he was on exclaiming: “I want to make it clear to the CRIC: we’ve seen that citizens (la ciudadanía) have suffered a lot because of these blockades and they don’t want any more blockades or threats to their security. To put an end to unnecessary confrontations, I am asking the men from the CRIC to go back to their reservations.”

Duque continued to place the blame on the CRIC stating that “at this moment we cannot let these provocations incite violence and generate a situation that unmanageable locally, when citizens (la ciudadanía) are involved in confrontations with people coming from other places and who they feel, for one reason or another, some type of threat”.

By using the word la ciudadanía to refer to those who fought against the blockades Duque made the indigenous population, represented by the CRIC, an other, that exists separate from the general population and is outside of the orbit of citizenship.

This sentiment is not exclusive to President Duque but is endemic among Colombian political and media elites.

The same day former Bogotá Mayor Enrique Peñalosa stated on Twitter that “Some indigenous people in Cauca forget that the roads, schools, aqueducts, hospitals, electrification, housing subsidies that are in their towns are paid for with taxes mostly coming from Bogotá, Medellín, Cali, and other cities.”

But the binary between the city and the town obscures the reality of displacement in Colombia. For instance, Cali has become the focal point of the protests over the past few weeks because much of the population is displaced from Afro-Colombian, Indigenous, and Campesino communities most affected by the armed conflict and drug violence.

According to Afro-Colombian social leader and member of the Community Council of La Naya Rodrigo Castillo “What we’re seeing is the revictimization of these people, who are running away from violence and inequality, by police violence in the city.”

“What’s happening is a product of the structural racism that’s always been present here in Colombia, before it was hidden but now we’re seeing that racism is more alive than ever…The fact that there’s a resistance to the Minga (indigenous protest) in Cali has a deeply racist aspect to it and is trying to paint the indigenous community as separate from civilians,” Castillo said.

“And in the logic of the internal conflict, the person who’s not a civilian is an armed actor. And in the Colombia of today those who are part of an armed group are military targets, that’s why social leaders are being murdered” Castillo concluded.

Castillo’s concerns are not unwarranted considering the fact that since the beginning of the year at least 67 social leaders have been murdered and the protests have left many protesters dead and wounded throughout the country. May 28th, the one-month anniversary of the protests, was a particularly bloody day with 13 protesters murdered in Cali.
target=”_blank”
A three-hour drive south of Cali in the city of Popayán, the capital of the department of Cauca one of the departments most affected by the conflict, where over 40 percent of the population identifies as Black or Indigenous, social leaders are being heavily criminalized in response to the National Strike.

On a recent visit to the city on May 15, Defense Minister Diego Molano publicly blamed various social leaders for burning down a police station, alleging that they were affiliated with the FARC dissidents and criminal groups. Molano even placed a 50 million peso (almost 14,000 dollars) bounty on their heads despite not having the authority to do so.

Andrés Maíz, one of the social leaders signaled out by Defense Secretary Molano spoke about the incident: “Because of my activism, when Defense Minister Diego Molano came to Popayán three weeks ago he put a price on my head saying that I was responsible for the burning down of a government building. But the real people responsible for crimes are the security forces who sexually assaulted a 17-year-old girl. After the assault, she killed herself saying that “they molested my soul.”

Maíz, who is a member of the Nasa indigenous community, is a familiar face in Popayán’s social justice community and works with a variety of groups from the campesino organization PUPSOC to the LGBTQ+ organization Orgulloses y Visibles to the movement to house the homeless. Yet, he now has to hide and constantly change location due to the threats from paramilitaries that he’s been receiving since being publicly attacked by Defense Minister Molano.

Maíz connects the current violence he is seeing to the long history of violence since the conquest stating, “What we’re seeing today is a re-articulation of the colonial process of oppression against black and indigenous communities. Old practices of oppression are becoming new practices like the vigilantes in Cali and the chophouses on the Pacific coast… Colombia’s not going through a humanitarian crisis, it’s living through the same historic process of exploitation and barbarism.”

With negotiations taking place, blockades being lifted throughout the country, and energy being shifted toward Colombia’s upcoming elections it’s looking like there may be an end in sight for the national strike. Yet, events over the past week have revealed wounds that will take serious reconciliation to heal something that does not seem to come anytime soon given the recent militarization of Cali and other cities throughout the country.

Cruz Bonlarron Martínez is an independent writer and researcher currently living in Colombia. He writes on politics, human rights, and culture in Latin America and the Latin American diaspora. Twitter: @cruzbonmar.