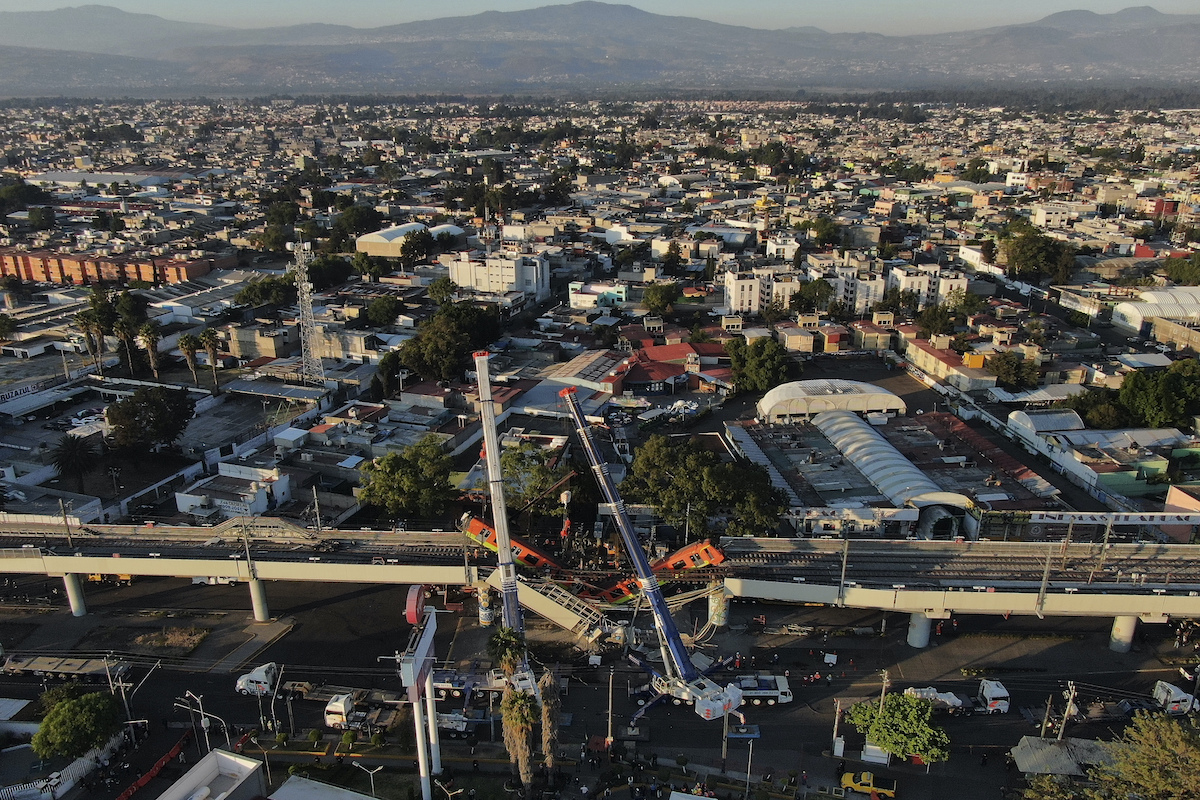 In this May 4, 2021 file photo, subway cars dangle at an angle from a collapsed elevated section of the metro in Mexico City, the day after the collapse. (AP Photo/Fernando Llano, File)

MEXICO CITY (AP) — A preliminary report by experts into the collapse of a Mexico City elevated subway line that killed 26 people placed much of the blame Wednesday on poor welds in studs that joined steel support beams to a concrete layer supporting the track bed.

The city government hired Norwegian certification firm DNV to study the possible causes of the May 3 accident, in which a span of the elevated line buckled to the ground, dragging down two subway cars.

The report also said there were apparently not enough studs, and the concrete poured over them may have been defective; the welds between stretches of steel beams also appear to have been badly done.

“The studs showed deficiencies in the welding process,” the report states.

The existence of construction defects when the line was built between 2010 and 2012 could be a major blow to the political career of Mexico’s top diplomat, who was mayor at the time, and to Mexico’s richest man, whose company built part of the subway line.

The report centered on photos and physical inspection that showed that metal studs welded to the top of steel support beams had broken or sheared off cleanly, suggesting the welds were defective.

The beams could not carry the weight of the track bed on their own. The studs projecting upward from the beams were covered with a poured concrete slab meant to help carry the weight.

But the studs were found to be still carrying ceramic rings that covered the welds. Used as a safety and control method to contain the molten steel, the rings were supposed to have been knocked off after welding so inspectors could see the welds themselves. The fact they were left in place may suggest the welds were not properly inspected.

That would fit in with reports that the project was rushed to completion so the Number 12 subway line could be inaugurated by current Foreign Relations Secretary Marcelo Ebrard before he left office as mayor in 2012.

The section was built by a company owned by telecom and construction magnate Carlos Slim, currently Mexico’s richest man and once the world’s wealthiest. Slim is an engineer by training and his firms are currently involved in building some parts of the controversial Maya Train project, which will circle the Yucatan Peninsula.

Any suggestions his firm did shoddy work on the subway would be a serious blow to his reputation as a sort of elder statesman of the Mexican business community.

The $1.3 billion Number 12 Line, the newest section of a vast subway system opened in 1969, was ill-fated from the start. The so-called Gold Line cost half again as much as projected, suffered repeated construction delays and was hit with allegations of design flaws, corruption and conflicts of interest. 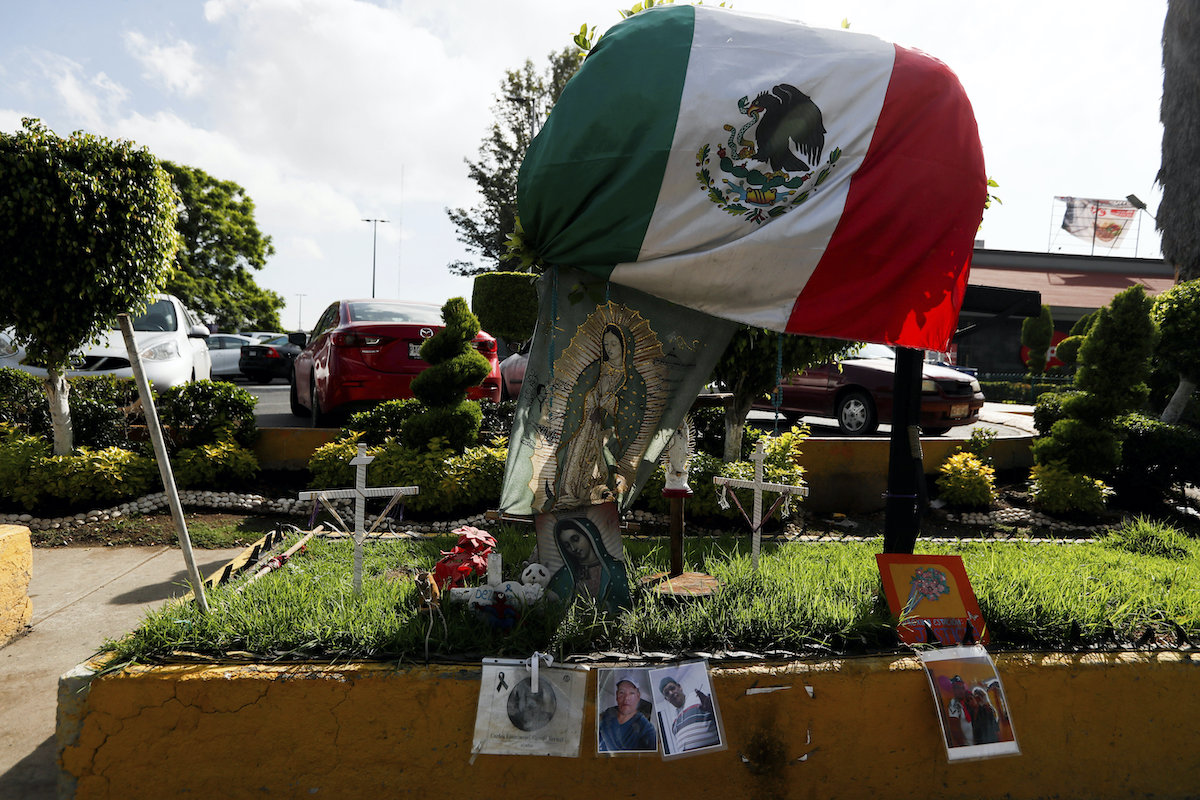 Photos of people who died in a metro collapse hang alongside a Mexican flag and images of Our Lady of Guadalupe, at the site of the now missing metro section in Mexico City, Wednesday, June 16, 2021. (AP Photo/Fernando Llano)

A top executive of one of the companies that built it was the brother of the man who oversaw the project for the government.

The scandal over forced closure of the costly new line in 2014 —just 17 months after it was inaugurated— essentially forced Ebrard into political exile. He was rescued by his patron, new President Andrés Manuel López Obrador, who had helped make him mayor in 2006 and resuscitated him by naming him foreign relations secretary in 2018.

Despite the subway scandal, Ebrard was put in charge of Mexico’s efforts to obtain coronavirus vaccines and was considered a top contender to succeed López Obrador in 2024.

Previous reports by engineering firms revealed Ebrard’s city government had made a series of startlingly wrong choices when the subway line was designed and built.

Experts said unusually sharp curves in the route exacerbated problems with the wheels-on-steel track design, which more resembles New York’s subway rather than the European-style rubber tires used on the rest of the system.

The Gold Line line chattered, bumped and shrieked. The rails began to take on a wavy pattern. Drivers had to slow trains to as little as 3 mph (5 kph) on some stretches.

In 2014, the Gold Line had to be shut down for months for the tracks to be replaced or ground into shape.

Ballast was added between the train’s tracks during those repairs, and some say extra weight and possible poor maintenance could have been potential factors in the collapse.

An official 2017 survey of damage from a deadly 7.1 magnitude quake showed indications of construction defects. Authorities decided on quick patches, welding props under the bowed beams and reopening service.

Ebrard has argued that subsequent investigations showed the line was judged to comply with standards when it was built. He wrote that “the supervision and maintenance that was up to the administration that succeeded mine remains in large part an unknown.”

Following earlier investigations into the design and corruption, more than 38 government employees were hit with fines or other punishments for improperly contracting out work on the train, as well as some criminal charges.

Since the May accident, much of the line has been closed. The elevated portion of the tracks rises about 16 feet (5 meters) above a median strip and roadway in the poor southern borough of Tlahuac. Slender, reinforced concrete columns are topped by horizontal steel beams, which in turn support prefabricated concrete track beds on which gravel, railway ties and tracks are laid.

Mexico City’s subway, which serves 4.6 million riders every day, has never had the one thing it needs most: money. With ticket prices stuck at 25 cents per ride, one of the lowest rates in the world, the system has never come close to paying its own costs and depends on massive government subsidies.