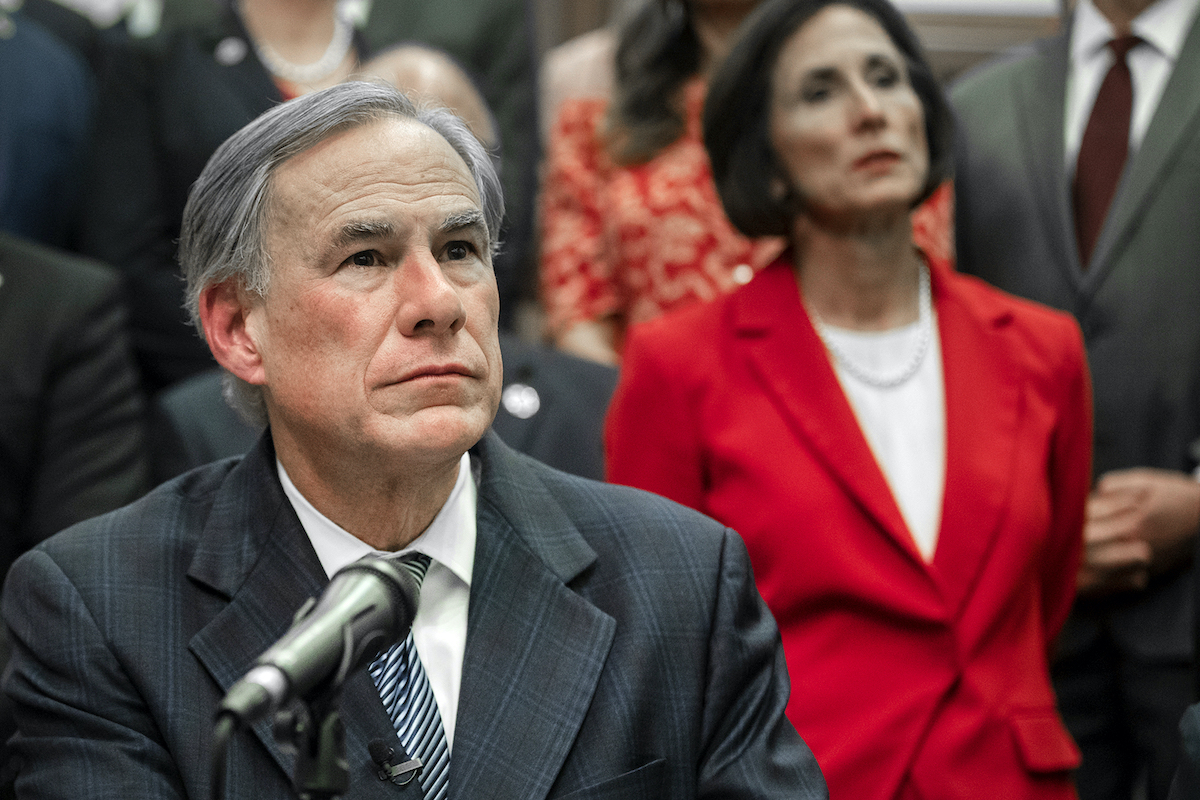 Gov. Greg Abbott speaks during a press conference on details of his plan for Texas to build a border wall and provide $250 million in state funds as a “down payment,” Wednesday, June 16, 2021, in Austin, Texas. (Ricardo B. Brazziell/Austin American-Statesman via AP)

AUSTIN, Texas (AP) — Promises to build a wall. Descriptions of American homes “invaded” by immigrants and a trail of “carnage.” Plans to arrest migrants and haul them to jail.

The ambitious Republican is first among a group of GOP governors who have picked up where the former president left off when it comes to hard-line immigration measures.

In recent weeks, Abbott has rolled out get-tough plans and rhetoric not seen before even in Texas, where Republicans have spent a decade making border security the centerpiece of their agenda. Abbott, who is viewed as a potential presidential contender in 2024, even promised to continue building Trump’s border wall and has adopted a questionable method of helping to pay for it: crowdsourcing and solicitations.

Abbott’s new push has been called political theater, which he has rejected as border migration numbers remain high. But it has gained Trump’s attention. The former president is due to travel to the U.S.-Mexico border for the first time since leaving the White House in January. He will appear with Abbott on Wednesday and is expected to be joined in Texas by other GOP lawmakers.

The moves from Abbott and other Republican governors, including some with possible 2024 aspirations, are one sign of how Trump’s anti-immigration policies are outliving his presidency.

Republican leaders who want a future in the party continue to see support for aggressive border measures as a political winner, buoyed by 2020 results that suggest that Trump’s tactics did not drive away Latino voters as some Democrats predicted.

There are signs the Republican pressure is working. After weeks of criticism for not visiting the border, Vice President Kamala Harris is set to go to El Paso on Friday.

“From a Republican audience perspective, it’s a rock-solid issue for the governor,” said Matt Langston, a Republican strategist in Texas. “It is an issue that is going to pay dividends for Gov. Abbott.” 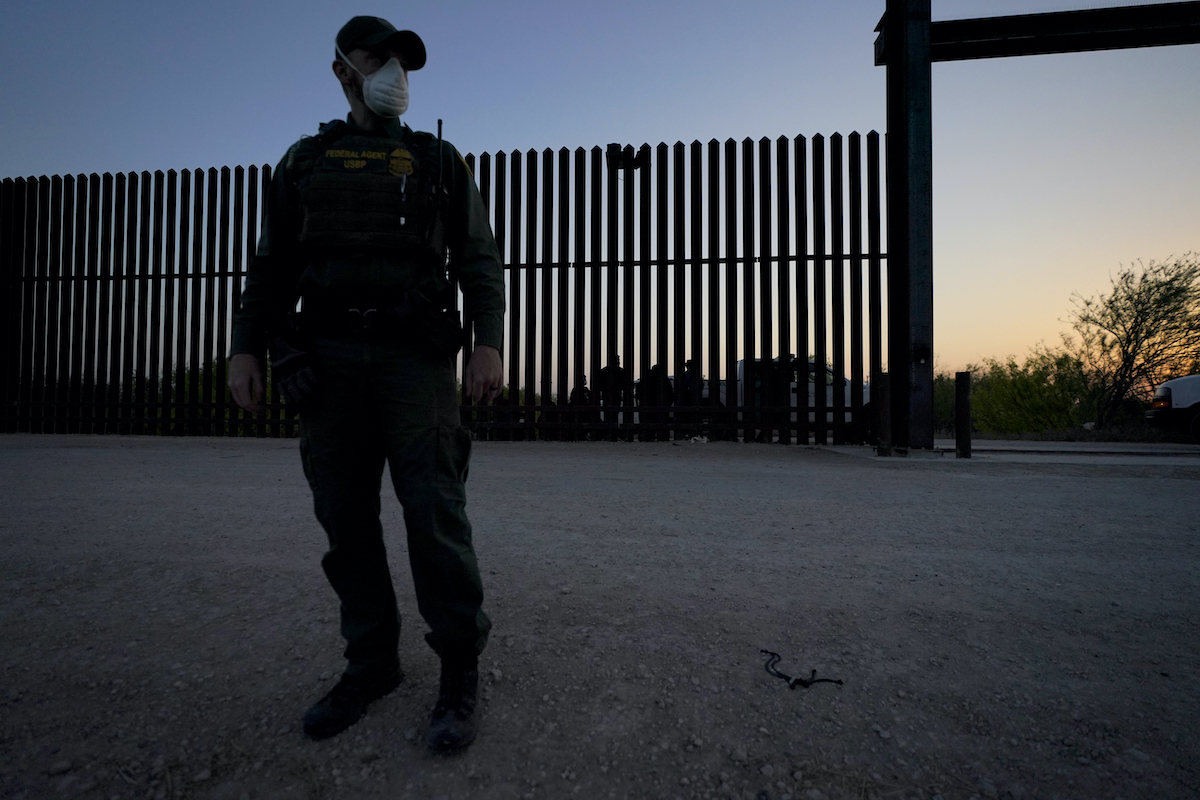 In this March 21, 2021 file photo, a U.S. Customs and Border Protection agent looks on near a gate on the U.S.-Mexico border wall as agents take migrants into custody, in Abram-Perezville, Texas. (AP Photo/Julio Cortez, File)

Abbott is not alone in that pursuit.

Florida Gov. Ron DeSantis, another potential presidential candidate, last week became the first governor to announce that he would deploy law enforcement from his own state to the nation’s 2,000-mile border with Mexico, although he gave scant details that left the extent of that commitment unclear.

Since Democratic Joe Biden took office as president, Abbott has tried to position America’s biggest Republican-led state as the foremost antagonist to the federal government’s border policies. He suggested without evidence in the spring that migrants with COVID-19 were putting Texans at risk as a result of Biden easing Trump-era immigration measures. Abbot began June by moving to shutter more than 50 shelters that house thousands of migrant children.

His intentions to resume one of Trump’s best-known and incomplete promises —building more of the wall— is a step Texas has not previously taken amid a decade of escalating spending and deployments to the border with Mexico. Abbott said Texas will start by shifting $250 million in state dollars toward new barriers and finance more through crowdsourcing, setting up a webpage and post office box so supporters of the project can donate their own money. The project has so far raised more than $459,000, according to his office, although it did not provide the number of donors.

The last high-profile attempt to build a wall with crowdsourcing was led by Trump supporters and Steve Bannon, the president’s former chief strategist, who was later charged with duping thousands of donors to the project. Trump pardoned Bannon on his last day in office.

The promises of the new barrier come on top of plans for Texas state troopers to begin arresting migrants and jailing them for state crimes, such as trespassing. Abbott said “homes are being invaded” along the border. Landowners are losing livestock and crops, Abbott said, because of “the carnage that is being caused by the people who are coming across the border.”

U.S. Customs and Border Protection recorded more than 180,000 encounters on the Mexican border in May, the most since March 2000. But the numbers were boosted by a pandemic-related ban on seeking asylum that encouraged repeat attempts to cross because getting caught carried no legal consequences.

Nearly 19,000 unaccompanied children were picked up along the border in March, by far the highest month on record. April was second-highest and May was third-highest.

Abbott has rejected criticism that his measures are just for show.

Immigration has been a weak spot for Biden.

A poll by The Associated Press-NORC Center for Public Affairs Research in May showed that 43% of Americans approved of his handling of the issue, while 54% disapprove. Republicans across the U.S. have seized on that dissatisfaction, with even GOP governors in Idaho and Nebraska saying they, too, will send a small number of state law enforcement officers to the border.

Trump made dramatic inroads with Latino voters last year along the Texas border, which has long been a stronghold for Democrats but is also more socially conservative than the state’s liberal big cities. Texas’ Rio Grande Valley was a major backdrop of Trump’s anti-immigration policies, but wall construction and Border Patrol staffing also created jobs.

Some Democrats and immigrant rights groups have questioned the legality of Abbott’s plans, though no court challenges have yet been filed. U.S. Rep. Vicente Gonzalez of Texas, a border Democrat, said solutions are needed, but not the kind Abbott wants, to slow migration numbers. He said walls have never worked and that Abbott should invest in technology such as cameras and sensors.

“I think he’s got it horrifically wrong,” he said. “He may be talking to the national audience. But clearly, that doesn’t represent the majority of Texans.”

Editor’s Note: Latino Rebels does not use the term “border crossers” in news stories. This AP story was edited to reflect that.