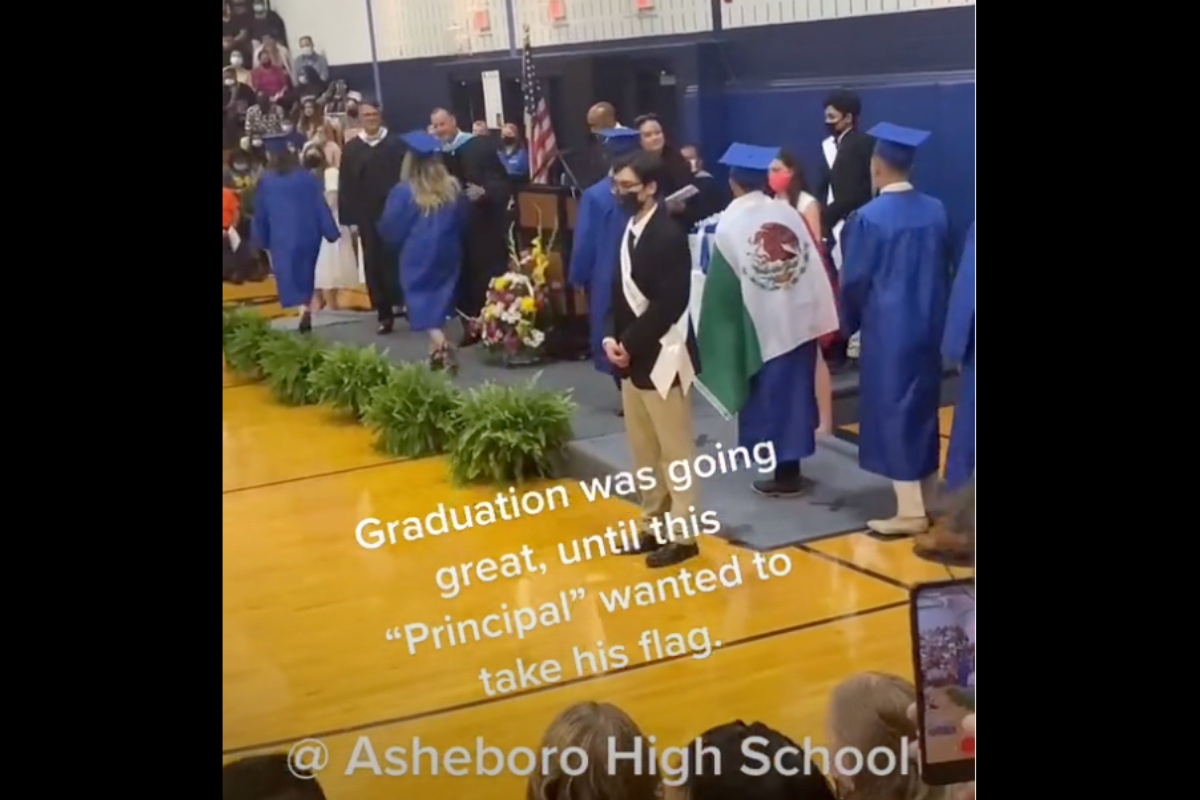 There is a dangerous habit in education that does not get a lot of attention. Principals, teachers, counselors, secretaries, and campus police officers are among the members of the school community who erroneously believe it is our responsibility to judge the morality and appropriateness of student conduct. We police the attire of our students, their language, their morals, and so much more. When students fall short of our righteous measuring stick, we shame and punish them.

This judgmental habit came into sharp focus during this year’s graduation season. A student, Ever López, of North Carolina had the audacity to wear his Mexican flag to his graduation ceremony. He was evaluated by the Principal, found “inappropriate,” and then she maliciously withheld his diploma. The principal (from here on referred to as Aunt Lydia) decided that on the last day of school, while a student attended a ceremony in front of his parents, that was the moment to evaluate his attire and to bully him over the way he clothed himself. The Aunt Lydias of education truly know how to pick petty battles. Aunt Lydias are good at this.

Doubling down on this pettiness and having the cops escort the student and his family off the campus is salt in the wound. It was a level of needless cruelty just so Principal Lydia could flex. She revealed her contempt for him, and she was going to teach him a lesson, even on the last day of school. She epitomized the habit of belittling, humiliating, shaming, and mistreating a student under the false concern for what is “appropriate.”

Policing student attire is common on all campuses. “Would you go to church like that?” This is a common Lydia-like question that escapes the mouths of school employees. Embedded within this sarcastic rhetorical question is an equivalent. The classroom is like the church; a holy and sacred space. Does this mean the teacher is a prophet? A god? You can see where I’m going here. It is hubris. The delusion of superiority. We look down on our students, and even their parents for letting their kids come to school “dressed like that”.

Yes, “we.” I include myself in this dangerous habit of moral superiority. When I began my career 26 years ago, this was the way teachers I worked with behaved. And I didn’t question the repulsive habit. To my shame, I adopted the entitlement to pass judgment. In doing so, I did damage that I can never repair.

Salma came to school in a sexy, knit dress. Creamed legs. Pushup bra. High heels. She was a tenth-grade Jessica Rabbit. I unleashed my inner Aunt Lydia. I commented on how short her dress was with a disapproving gaze. We were the only two people in the room, so I didn’t publicly humiliate her.

Give me the Nobel Peace Prize.

When I saw Salma again the next day with her mother, I felt comfortable telling the mother all of Salma’s talents as an English student, but then ended our parking lot conversation with the small problem of Salma’s attire. I told the mother that Salma’s clothes were “not appropriate” for the classroom. Salma laughed at my prudishness. She turned to her mother: “Now tell her who bought the dress for me.” The mother rolled her eyes, and Salma giggled with a short-lived triumph.

This small parking lot conversation turned into a disaster. Salma came to my classroom the next day. Anger and hurt written on her face. She took her jacket off and pulled up her shirt. Welts covered her back. When the mother went home, she told Salma’s father that Salma was not dressing appropriately for school, so the father beat her with his belt.

Aunt Lydia, from The Handmaid’s Tale, is meant to send shivers of revulsion down one’s spine. She believes wholeheartedly that she is morally superior, and she leads women and culture to a moral high ground. And in that conviction, she will police, shame, humiliate, devalue, belittle, and manipulate women right into the arms of their brutalizers.

I policed Salma right into the arms of her abuser

When Ever returned to his school following the graduation ceremony, he did not go alone. Siembra NC went with him, “a grassroots organization focused on defending immigrant communities from… bad políticos.” Siembra NC organized a news conference in front of the school, so Ever went with power and advocacy, and as such, principal Lydia could not repeat her misconduct in front of cameras. At least not without consequence. Principal Lydia knew how to curb her behavior and feign respect for the students in her charge.

In my 26-year teaching career, I have witnessed Principal Lydia’s type of manipulative cruelty on every single campus I have ever worked on: California, Egypt, Turkey, Bangladesh, and Senegal. Aunt Lydias roam freely on planet earth, and their habitat is K-12 campuses. When Principal Lydia picked the graduation ceremony, of all places, to police Ever’s attire, I saw myself. She needlessly flexed, not because at that moment she would make the ceremony better, but for no other reason than she could.

Change must happen. The Evers of the world should not have to show up with outside advocacy. The Evers found on every campus should have compassionate and humanitarian school secretaries, or teachers, or campus officers, counselors, or a vice principal to have his back. I want us to stand in solidarity with all of the Evers. The Aunt Lydias of education needs to be rooted out. Pettiness needs to be challenged, not from outside organizations, but from those of us within the educational institution. I wish I had been on that campus for Ever. I’m not the same teacher I was in 1998. I have evolved into the teacher that students come to for support, both educationally as well as emotionally. All of us should be advocates for the Evers and the Salmas.

One response to “OPINION: Schools Are Policed by Aunt Lydias”