In Yarimar Bonilla and Marisol LeBrón’s book, Aftershocks of Disaster: Puerto Rico Before and After the Storm, the authors write that “disasters are not singular events but ongoing processes.” It’s within this framework that we can understand why Cecilia Aldarondo’s new documentary, “Landfall,” which premiered on PBS Monday night, doesn’t show any footage from Hurricane María.

It is a self-proclaimed “portrait of what happened in between” Hurricane María hitting Puerto Rico on September 20, 2017 and the protests that led Governor Ricardo Rosselló to announce his resignation on July 24, 2019. There are no images of families on rooftops waiting to be rescued, of FEMA trailers serving as storage for overflowing morgues, or of President Donald Trump throwing paper towels into a crowd.

“The very toxic narrative that was perpetuated in the media was one of Puerto Rican dependency with their arms outstretched waiting to be saved, when in reality people were saving one another,” Aldarondo told Latino Rebels this past weekend from Puerto Rico, where she has been premiering the film in a tour that was delayed for a year by COVID-19.

“It happens all the time in depictions of disaster, a fascination with suffering and ruination,” Aldarondo said. “I felt like I needed to intervene there.”

That’s not to say that in “Landfall,” one does not see and feel the suffering of Puerto Ricans after María. The film travels across the archipelago and diaspora, bearing witness to the Puerto Rican experience after the storm. 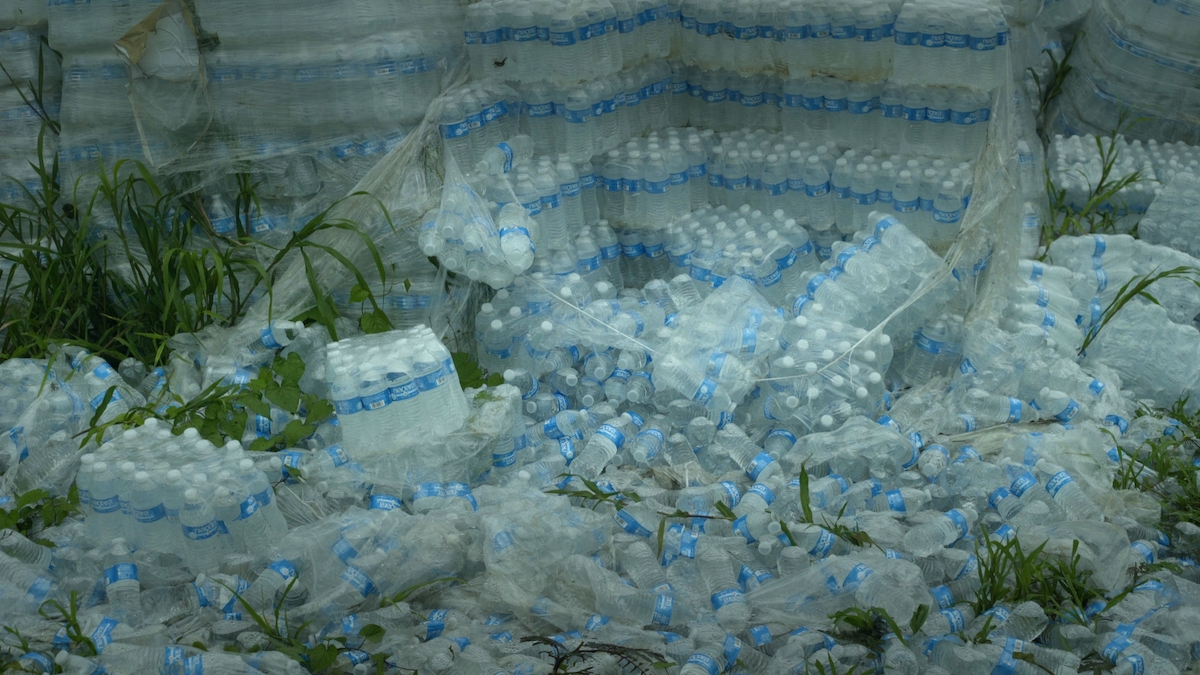 Some of the thousands of water bottles discovered long after the storm that were never distributed to victims. “Landfall” shows the mutual aid effort of Puerto Ricans helping one another in the face of widespread failure by the local and federal government. (Photo courtesy of POV / Blackscrackle Films)

In Orocovis, a man and his daughter restore the farm on which they have worked their whole lives. In the days after the storm, the daughter recalls waiting in line for hours for food that had already run out. She draws connections between the dismantling of the campesino lifestyle in the middle of the 20th century and the island’s lack of food sovereignty today. She hopes to buy the farm one day, but wonders if, like so many young people after María, she will have to leave Orocovis to save enough money to make that dream possible.

She is one of many Puerto Ricans in the film finding ways to reclaim aspects of their sovereignty. In Lares, a group of women have broken into an abandoned school ‚one of hundreds shut down due to the austerity measures‚ and are in the process of converting it into housing for the displaced and a community center where people can learn job skills. The woman leading the project speaks of how, in her community, a form of socialism arose not from ideology but out of necessity.

“This is living socialism,” she says. “The common denominator is the common good.” 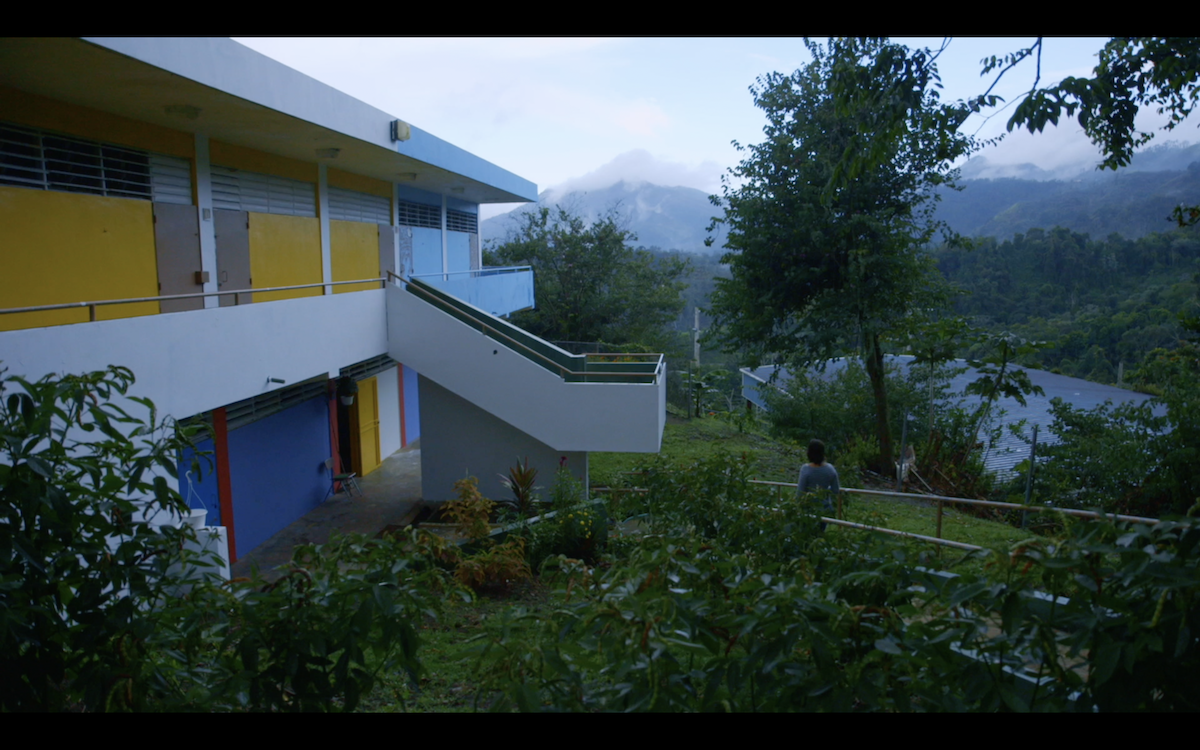 In Bartolo, citizens banded together to convert an abandoned school into a housing and resource center. (Photo courtesy of POV / Blackscrackle Films)

Not everyone in “Landfall” shares the same ideas of the common good. The film also follows several cryptocurrency evangelists who have moved from the U.S. mainland to Puerto Rico to take advantage of Act 20/22, the tax incentives created in 2012 to lure wealthy investors to the island.

At a cryptocurrency conference in Condado the year after María, a speaker lays out how and why a mass influx of crypto enthusiasts should move to Puerto Rico. “There is no better place in the world for an American to live from a tax perspective than Puerto Rico,” he says. He remains unnamed in the film but he is Yaron Brook, chairman of the board of the Ayn Rand Institute, which promotes laissez-faire capitalism and “a culture in which individuals are free to pursue their own happiness.” Brook tells the crowd that Puerto Rico should continue to incentivize Americans to move here with the lure of almost zero taxes and by privatizing nearly every public service. He likens the archipelago’s potential to that of Hong Kong before the British colonized it: “It was a little fishing village, there was nothing there. A rock in the middle of nowhere.”

The viewer never learns the names of the characters or of the organizations they’re a part of, a deliberate choice by Aldarondo. “Traditional documentaries identify people by name or profession,” she says, “but I wanted the viewer to get to know the protagonists in a more profound way, in the richness of daily life, and as part of a collective portrait. If there’s a main character in this film, it’s Puerto Rico itself.”

Each person in the film —whether it is the young woman gathered at a dinner table with friends, sharing that her idea of hope post-María is to leave her house without fear of being robbed, or to the man working in New York, reluctantly forced into the diaspora to make a living and longing to be home, or the young couple in Vieques, resolute to never leave their island even as their neighborhood is slowly swallowed by tourist shops and English takes over as the predominant language spoken on their street— represent hundreds, thousands, or even millions of other Puerto Ricans experiencing the same conflicts and aspirations. 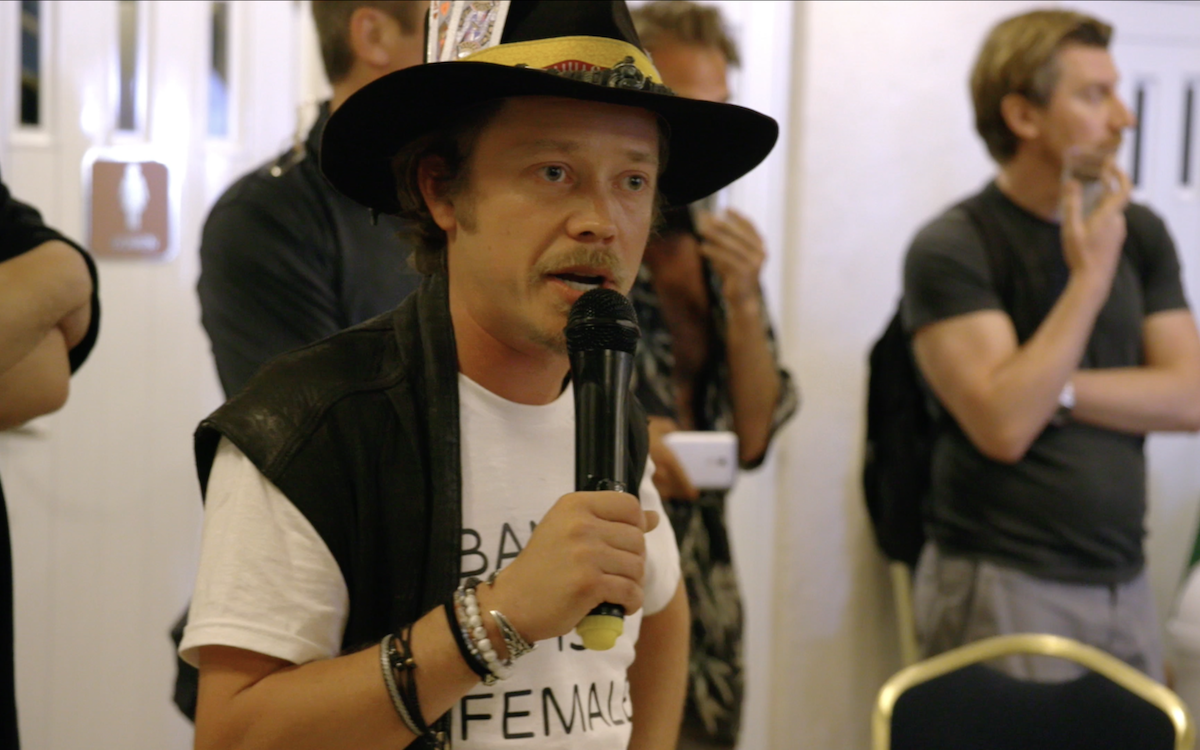 Bitcoin billionaire Brock Pierce at a “Day of Listening” event in Rincón, where he clashed with locals suspicious of what “opportunity” he could bring Puerto Rico. (Photo courtesy of POV / Blackscrackle Films)

The documentary also strays from the common practice of bringing in academics or officials to offer context. “A major goal of the film is to rethink what we call ‘expertise,’” Aldarondo said. “The people living this crisis every day are the experts.”

“Landfall” offers limited context to the issues it takes on, like the island’s $72 billion debt crisis that predated the hurricane, the U.S. Congress’ passage of the PROMESA bill that established a seven-person Fiscal Control Board colloquially now as the junta, the crippling austerity measures that followed that have closed schools, raised tuition, and threatened pensions, the horrific failures of public systems to assist victims after the storm, or the scandal under which Rosselló and members of his administration resigned.

“I insisted on prioritizing a Puerto Rican audience that does not need these things explained to them,” Aldarondo noted. “But ideally it’s also an accessible film. I think of the film as a kind of primer, a starting point.”

While many in the diaspora are painfully familiar or have experienced firsthand Puerto Rico’s misfortunes, those whose engagement has drifted may feel a renewed call to action. The diaspora-to-island connection is symbolized in the relationship that anchors the film, between Aldarondo and Lale Namerrow Pastor, an activist born in Puerto Rico who has lived there most of their life. The film is punctuated by quiet conversations between Namerrow Pastor and Aldarondo, played over still scenes of abandoned houses, waves lapping on shorelines, felled electrical lines and workers cleaning streets. Lale recalls the trauma of María and reflects on their uncertainty over whether they —or any Puerto Rican— should try to fully move on from it. Aldarondo is the witness to Namerrow Pastor’s journey through their own grief, their cautious hopefulness after the island finally pours into the streets in protest, finally unleashing what one character calls “the hurricane in our chests,” and the uncertainty that hangs over any glimmers of progress. 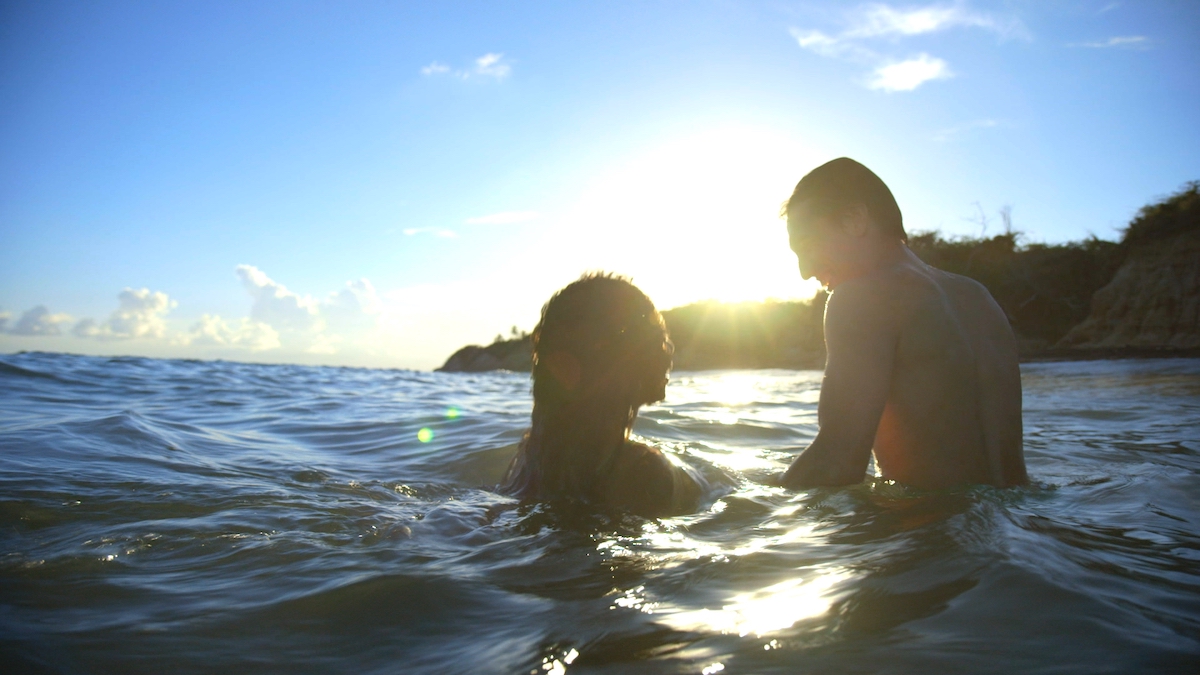 More than 600,000 Puerto Ricans have left the island since 2004, but for many young people, the dream is to be able to stay in their homeland, not to leave it. (Photo courtesy of POV / Blackscrackle Films)

“Landfall” is a minimalistic, quiet film about the space between María and the 2019 protests. It’s in the spaces between these monumental events, in the “process” of disaster as Bonilla and LeBrón characterize it, that it is determined what, if anything, will really change. In the moments between upheaval, people rest, reflect and grieve. In the gradual, deliberate work of the farmers, the community workers, the families, and the activists, Puerto Rico’s future will be determined. Those who have stayed, those who have left, and those whose time on the island has been mostly spent in their imaginations all have roles to play.

But “Landfall” is not just a film for Puerto Ricans. It is a “cautionary tale for the world,” as Aldarondo said. “We are, the world over, seeing an increasing threat to a sense of the common good… those who are the most vulnerable are the ones who are most knowledgeable about what is needed and how to be ready. The grave mistake is to exceptionalize Puerto Rico and for one to think, ‘That couldn’t happen here.’”

“Landfall” is available to stream on pov.org until August 11.

Gabriela Aoun is a writer and producer focused on the intersection of environmental and social issues. She is a Columbia Journalism School Class of 2022 master’s student and previously served as content director of the Adventure Sports Network. Twitter: @gabriela_aoun.