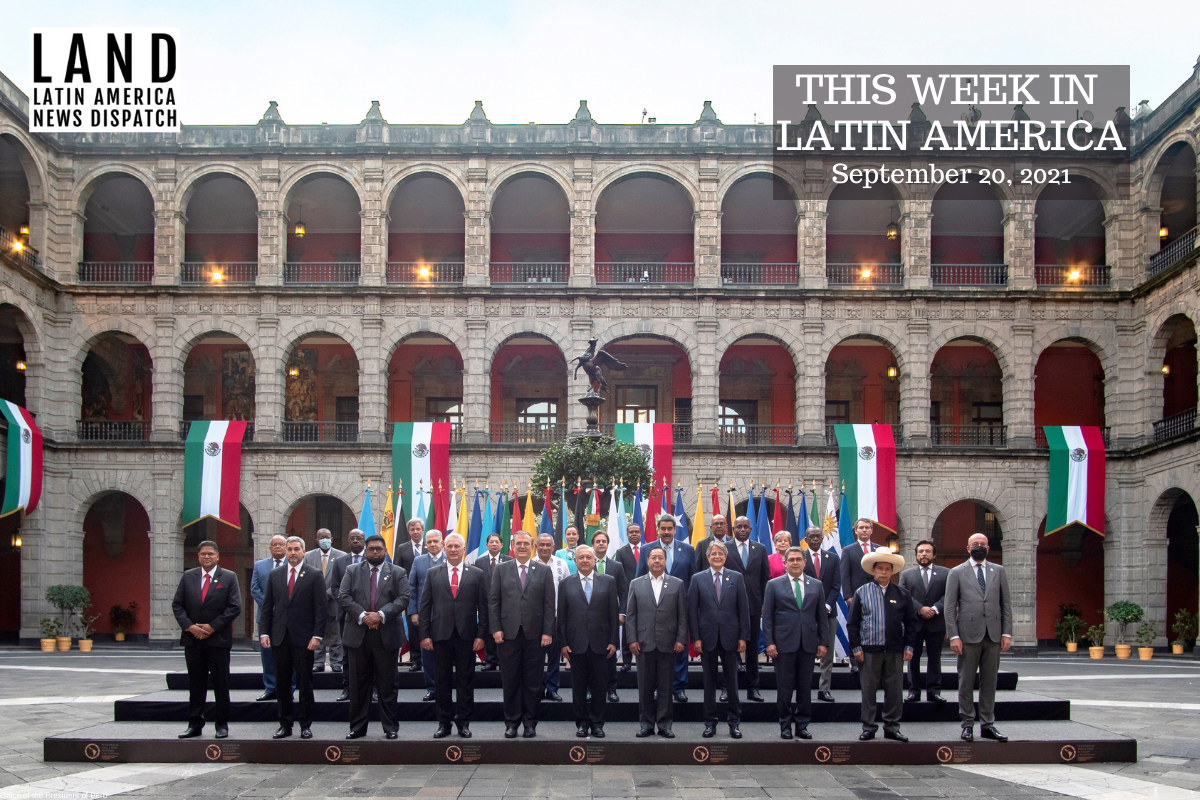 Group photo of CELAC leaders on September 18, 2021. (Photo: Office of the President of Peru)

CELAC: The Community of Latin American and Caribbean States (CELAC) convened its VI Summit of Heads of State and Government in Mexico City on Saturday. President Andrés Manuel López Obrador of Mexico reiterated ambitions for CELAC to replace the Organization of American States (OAS) as the region’s primary forum of cooperation and advocated for greater economic integration in the vein of the European Union (EU). The creation of a fund for natural disaster response was also announced.

The unexpected presence of Nicolás Maduro sparked tensions along ideological lines. Right-wing Presidents Abdo Benítez of Paraguay and Uruguay’s Lacalle Pou asserted that their participation in the summit did not signify a recognition of Maduro’s government. In response, the Venezuelan leader called for an end to the divisiveness in Latin America and defended fellow socialist governments in Cuba and Nicaragua against accusations of human rights abuses leveled by Lacalle Pou.

This year’s summit was the first since 2017. In 2020, Mexico and Argentina (under the leadership of President Alberto Fernández) led efforts to revitalize the organization. Created in 2010 with the aim of countering U.S. influence in the OAS, CELAC brings together 32 independent states of Latin America and the Caribbean. President Jair Bolsonaro of Brazil withdrew from the organization last year.

BRAZIL: On Tuesday, Brazil’s senate and supreme court overturned President Bolsonaro’s ban on the removal of social media posts. The ruling came less than a week after Bolsanaro instituted a policy restricting social media platforms from erasing content deemed to spread misinformation. It was the first time a democratically-elected national government intervened to prevent a social network from publishing content that violated its rules, setting a frightening precedent in the lead-up to presidential elections in Brazil.

Bolsonaro has repeatedly posted misinformation about COVID-19, and has stated publicly and online that the only way he’ll lose next year’s election is through fraud. Ruling bodies in Brazil claimed that Balsonaro’s provisional measure was not valid because it didn’t meet regulatory requirements.

CHILE: Elisa Loncón Antileo, President of the Constitutional Convention, has been named in TIME Magazine’s 100 Most Influential People of 2021. The accompanying profile celebrates Loncón as a symbol of Indigenous struggles to have a voice in national affairs and highlights the Mapuche linguist’s long history of advocacy for the teaching of indigenous languages.

Loncón was elected President of the Constitutional Convention at its inaugural session on July 4, earning 96 of a possible 155 votes. Soon after her assignment, she announced intentions to petition Congress for amnesty for those arrested during the 2019 protests in Chile that kick-started the process of drafting a new Constitution.

COLOMBIA/REGION: An annual report by Global Witness finds that lethal attacks against land defenders are increasing, with deaths concentrated heavily in Latin America. Almost three-quarters of the record 227 murders registered in 2020 occurred in the region and over a third targeted Indigenous communities.

Colombia recorded the highest number of killings for the second year in a row, with 65 lethal attacks carried out in a context of heightening human rights abuses, surveillance, and incursions into Indigenous territories despite optimism for improved conditions after the 2016 peace agreement. After Colombia, the deadliest sites for environmental defenders were Mexico, the Philippines, Brazil and Honduras.

The report cites the exploitative logic of extractive industries —including logging and mining— and the impunity under which they operate as contributing factors to the killings. Despite pandemic-related lockdowns, many extractive activities were allowed to continue, while restrictions on movement and civil liberties made it more difficult to investigate crimes.

VENEZUELA: United Nations experts reported on Thursday that Venezuela’s judicial system has been complicit in human rights abuses perpetrated by the State. The year-long investigation found that political interference in judicial proceedings prompted judges and prosecutors to facilitate legal shelter for a range of crimes including extrajudicial killings, torture, and sexual violence directed at real or perceived government opponents.

The report was based on interviews with 177 judges, prosecutors and defence attorneys, in addition to review of thousands of pages of case files. The Venezuelan government did not respond to repeated petitions for information and denied entry to the investigators for the second year in a row.

The Venezuelan government dismissed the findings, while announcing the creation of a judicial body to investigate allegations of wrongdoing.

DOMINICAN REPUBLIC: Thousands marched to the President’s Office in Santo Domingo on Sunday to protest the expansion of mining activities in the Eastern province of Monte Plata. Protesters specifically opposed the construction of a mine waste storage facility, which activists warned would lead to the contamination of the Ozama and Isabel rivers and pose serious health and environmental risks to surrounding communities.

The demonstration, coordinated by a coalition of civil society organizations —including water rights activists, peasant and labor unions, and women’s rights groups— also expressed broader complaints about the effects of extractive industries. Speakers and placards denounced the government policy as well as the operations of foreign mining companies such as Canadian-based Barrick Gold Corporation and Falconbridge Ltd.

HAITI: Prime Minister Ariel Henry on Wednesday fired Justice Minister Rockefeller Vincent just days after putting together an interim Council of Ministers to lead Haiti until its next election. The dismissal compounds the political uncertainty triggered by the assassination of President Jovenel Moise on July 7 and fuels suspicion of Henry’s alleged involvement in the murder plot.

Also on Wednesday, General Secretary of the Council of Ministers Rénald Lubérice resigned. In an open letter, Lubérice accused Henry of obstruction of justice for refusing to answer questions concerning phone calls the Prime Minister received on the night of the killing from a key suspect in the murder case currently on the run.

Henry removed chief prosecutor Bel-Ford Claude from his office on Tuesday, hours after the official had petitioned the presiding judge on the case to open an investigation against the Prime Minister.

EL SALVADOR: President Nayib Bukele’s recent stance on abortion and same-sex marriage has provoked intense criticism from human rights groups. On Friday the president stated that the constitutional reforms the government will send to congress will not contain decriminalization of abortion nor permit same-sex marriage or euthanasia. The growing criticisms point out the contradictions of Bukele’s administration promoting a progressive agenda while maintaining some of the strictest anti-abortion laws in the Americas and restricting same-sex marriage.

US/HAITI: On Sunday, the administration of President Joe Biden began mass deportations of Haitian migrants who had gathered in the Southern border town of Del Rio, TX. It is estimated 14,000 will be returned to Haiti over the next three weeks.

Haitian immigration officials have implored the U.S. to stop sending flights as the country is unable to care for these persons. This despite Prime Minister Ariel Henry’s assurances on social media late on Saturday that arrangements [had] already been made” to accommodate deportees.

The devastation of the August 14 earthquake along with the political turmoil following President Jovenel Moïse’s assassination in July have driven thousands of Haitians to the border in recent weeks.