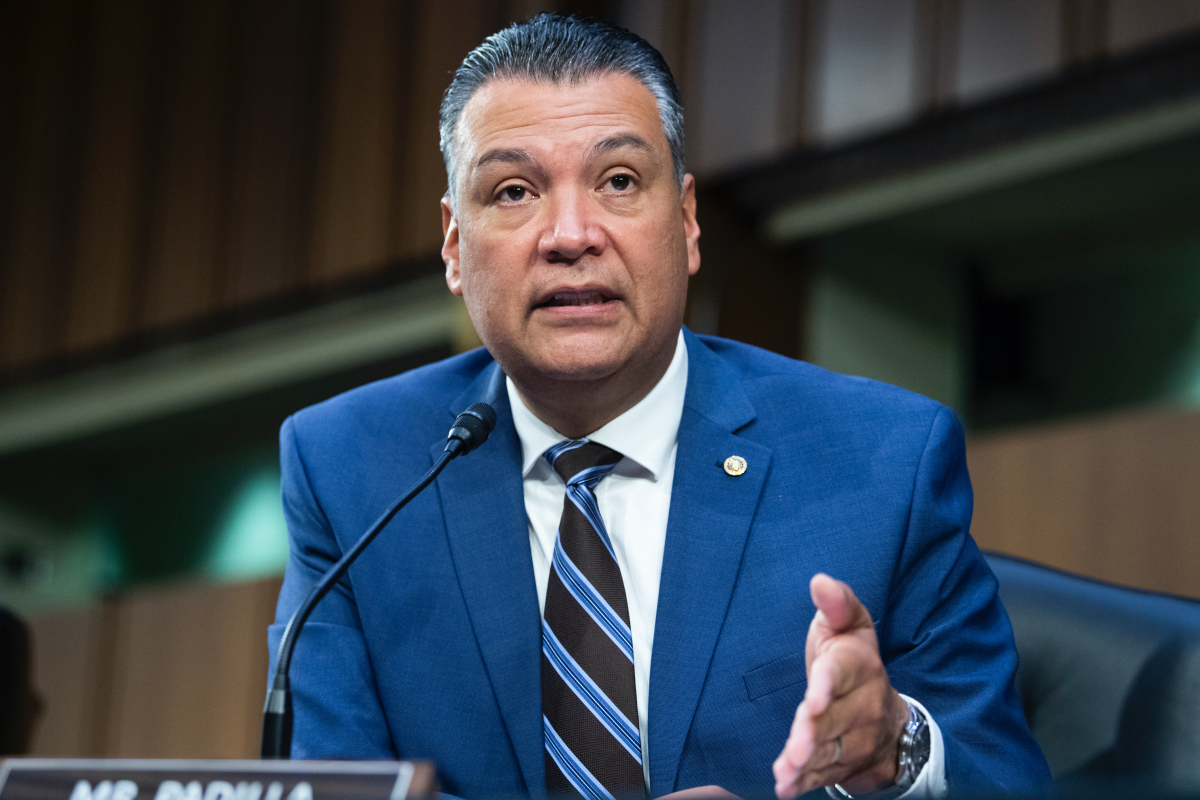 WASHINGTON, D.C. — Alex Padilla, the 48-year-old the freshman senator from California, will not say if he will support the Democrats’ social spending package if it leaves immigrants behind. Latino Rebels has asked Padilla, as well as the other three Latino Democrats in the Senate -Catherine Cortez Masto (D-NV), Robert Menendez (D-NJ) and Ben Ray Luján (D-NM)- on numerous occasions since Parliamentarian Elizabeth MacDonough ostensibly nixed immigrant reform from the progressive bill.

Any Hispanic senator willing to oppose the budget bill would entirely reshape the political calculus for Democratic leadership in the 117th Congress, since leaders cannot tell Latino members to oppose immigration reform, at least not publicly.

But the political calculation of opposing Democratic leadership in Washington is different for Padilla, who is up for reelection next year in California, a state where the pro-immigrant movement has the organizing chops to swing elections. Just look at the recent run-off vote where immigrant rights advocates provided the organizing backbone that saved Democratic Governor Gavin Newsom from an embarrassing recall race with Larry Elder, a Trump-backed entertainer running on a platform of MAGA xenophobia.

Important column by @jeanguerre ⬇️ one that begs the question: can freshman @SenAlexPadilla afford to come away empty handed on immigrant relief in the 117th Congress? Would voting for yet another budget reconciliation that leaves immigrants out hurt his reelect chances next Nov? https://t.co/lX3lcGmZwl

“I think it would massively energize Latino voters here who are sick of all talk and no action on immigrant rights in D.C.,” said Los Angeles Times columnist Jean Guerrero when asked by Latino Rebels how Padilla holding up the Biden social spending bill on behalf of immigrant rights would play out in her state. “Californians understand that immigrants are vital to our collective prosperity and safety because we live that reality on a daily basis. It is cruel and racist to leave millions of people without access to basic rights. Padilla should be the messenger and chief advocate on this.”

Guerrero, one of the few journalists in the nation who first predicted, then faithfully covered, the Latino turnout that would prove essential in California’s recent recall election for governor, is not alone in her assessment.

“If Alex Padilla can come back to California and say that he helped deliver some sort of immigration reform that provided legalization, it would play out well for his reelection,” said Adriana Maestas, a longtime Latino politics observer and writer based in Southern California. “The Golden State is home to over two million undocumented residents, even if half of those were put on a path to legalization, it would be a big win, although I think we really need a mass amnesty to give as many people as possible a chance to become citizens.”

Just asked @SenAlexPadilla's reaction to the 2nd immigration pitch rejected by the parliamentarian.

Immigrant rights advocates are not pressuring Padilla, at least not last week at the “escalation rally” in front of the White House where nearly 50 participants were arrested -a rally attended by none of the four Latino Democrats in the Senate who were all in Washington last week for votes to extend the debt limit.

And why would they leave the Hill to attend a rally downtown? The myriad of immigrant organizations behind the rally targeted Vice President Kamala Harris, who Padilla replaced for a two-year term that ends in next year’s midterm. Meanwhile, there is virtually no pressure for Padilla (or any Democratic Senator, for that matter) to put his vote on the line for immigrants, as at least three of his Hispanic Caucus colleagues have done in the lower chamber of Congress.

In the House, Reps. Chuy Garcia (D-IL), Lou Correa (D-CA) and Adriano Espaillat (D-NY) have all gone on the record to say that they will not support Biden’s massive social spending plan unless immigrant relief is included.

.@JakeSherman asks Padilla for details on 'Plan B, C, D, etc' to the parliamentarian. Padilla talks registry date adjustment. "In reading the parliamentarian ruling Sunday, that's something that's more consistent with her ruling," says Padilla of updating the visa registry.

At an immigrant rights rally in front of the White House on Thursday, Latino Rebels asked five different organizers from four immigrant rights organizations if they supported Hispanic Caucus senators holding up the Biden social agenda on behalf of immigrants. Instead of demanding Padilla stand firm for immigrants the way Senator Joe Manchin (D-WV) has for a range of austerity measures within the social spending plan, organizers instead took aim at Vice President Harris, who is likely to preside over the final vote on the budget reconciliation bill.

None of the organizers asked were willing to give a simple yes or no answer about whether Hispanic caucus senators like Padilla had an obligation to immigrants beyond simply hiding behind the parliamentarian’s decision like other Democratic senators.

Bottom line: Without pressure from advocates to take a hard line on immigrant relief, it’s unlikely that a legalization program will be enacted during the 117th Congress. The window for a long-sought pathway to citizenship for the millions of immigrants in this country is closing quickly. With the potential for Republican rule looming after the midterm next year, it’s unlikely that Democrats will have the trifecta of House, Senate, and White House control for a long time to come.