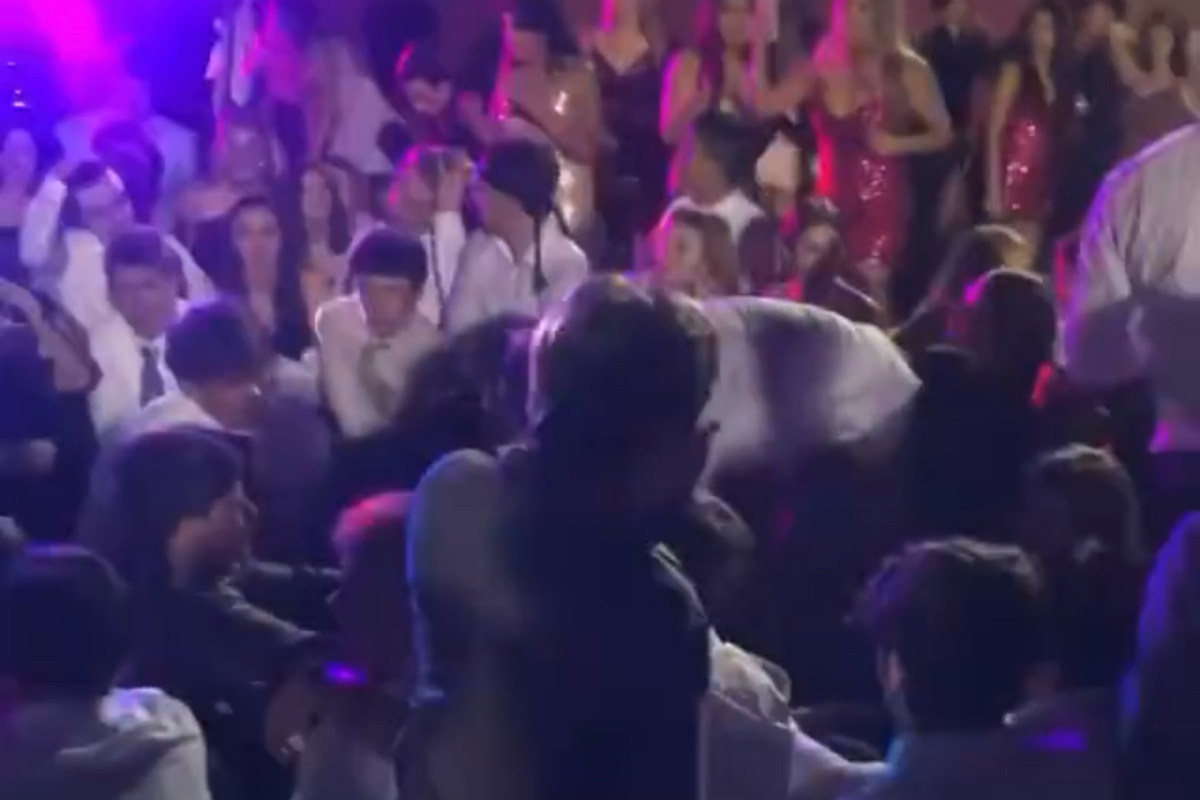 Screenshot from video by Elizabeth Pacheco/Instagram

Update: On Tuesday, Marist issued another statement, after saying that some students did kneel during other songs. Part of that statement read as follows: “Although these are the facts, we recognize there are still students at Marist who viewed this video or who were at the Homecoming dance that were hurt by these actions. Marist is a family, and when one of us hurts, we all hurt. The fact that there were students who left the homecoming dance hurt by what they witnessed shows us that there is work to do.”

Administrators at a Catholic high school in Chicago are investigating an incident that occurred during the school’s homecoming dance over the weekend, in which white students kneeled and booed during a Spanish-language song.

Video recorded by Elizabeth Pacheco, a 16-year-old junior of Mexican descent at Marist High School on the city’s southwest side, shows a group of white students kneeling in the center of the dance floor while a smaller group of Mexican students are seen line-dancing to a Spanish-language version of the Billy Ray Cyrus hit “Achy Breaky Heart.”

“You send us emails asking for pictures of our families during Hispanic Heritage Month,” reads Pacheco’s caption to the video on Instagram, which has received nearly 200,000 views in the past two days. “You hang up our banners of papel picado throughout the school. If you love our food, ethnic fashion, and energy so… why do you resent us. [sic] How would you like it if we kneeled to your country music?”

In addition to the kneeling and booing, Pacheco and her friend Maia Trevino, who was also at the dance on Saturday night, say they heard a classmate make a racist comment.

“I’m trying to understand their point of view,” Pacheco told the Chicago Sun-Times. “But when it’s something that’s so wrong that just targets you and your community, it’s really upsetting. I kind of can’t see them the same anymore.”

“I never thought that that would ever happen to me, especially in a school where I felt safe and appreciated and with friends -who I considered friends,’ she added. ‘Seeing them kneel and disrespect what I am… and the culture I represent … it doesn’t feel good.”

The school’s spokeswoman, Kristine Kavanagh, released a statement saying Marist administrators were “disheartened” by the incident and were using it “to educate all members of our student body, so they have a clear understanding of how their actions, even unintended ones, can be perceived as hurtful to others.”

“We respect and foster diversity, equity, and inclusion for all and want every student to succeed by feeling valued, seen, and connected,” the statement reads. “We, as a school, promote cultural diversity and are providing professional development on cultural competency for staff and students. Marist High School is fully investigating the events and will address them as appropriate.”

On Monday some sophomore students kneeled during their homeroom class in protest of racism at the school. Principal Meg Dunneback also met with Pacheco and other Latino students.

This isn’t the first time anti-Latino sentiment has reared its head at Marist High. Pacheco says that just last month some white students were heard booing and using a stereotypical Mexican accent after kitchen staff started playing Latin music in honor of the start of Hispanic Heritage Month.

And in 2016 two white students were expelled for racist text messages shared on social media. The girls’ fathers sued the school for $1 million, though the case was settled out of court and administrators allowed the girls to receive their diplomas.