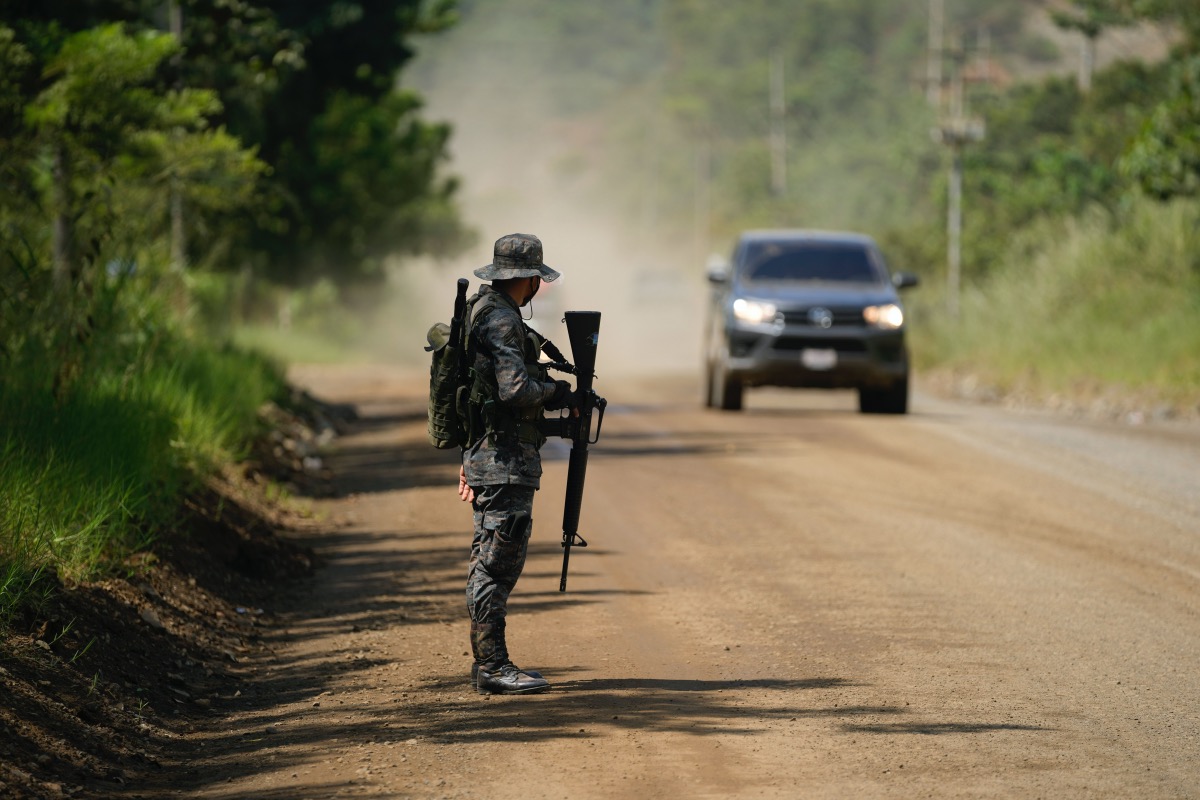 EL ESTOR, Guatemala (AP) — Police and soldiers frisked people at checkpoints and a tense calm reigned in the streets of this lakeside town Monday after protests against a mining project erupted into violence over the weekend.

Guatemala’s government imposed martial law and a dusk-to-dawn curfew Sunday and filled the town of 20,000 residents with security forces. Teams carried out searches at homes and offices looking for protest leaders, while those targets went into hiding.

The police were ostensibly there to make sure protesters do not block trucks from entering and leaving a nickel processing plant, which shares the site with the disputed mine. Protesters contend the operation pollutes Lake Izabal.

The Fenix mine, owned by Guatemala Nickel Company, a subsidiary of Switzerland’s Solway Investment Group, is under a court order to carry out a public consultation process in the community about the project.

In a statement Sunday, Solway said that it was fully complying with the court-ordered consultation on the Fenix mine and noted that the nickel processing plant on the site is not subject to the court order.

The Guatemalan government said in a statement that the processing plant and the company’s other mining rights in the area are not affected by the court order.

A pre-consultation process for the Fenix mine began a month ago, and the exclusion of a group of local fishermen and Indigenous Q’eqchi from the discussion by Guatemala’s Energy and Mines Ministry appeared to have sparked the protest.

Astrid Franco, the local delegate of Guatemala’s Human Rights Ombudsman, said a case had been opened over the groups’ complaints.

“Yesterday, the government offered the protesting communal leaders a dialogue,” Franco said. “What they want is to participate in the consultation, the how and when they’re going to do the consultation.”

Prosecutors announced the first two arrests under martial law Sunday, allegedly for drug and weapons possession. The suspension of basic rights and searches carried out put the Indigenous town on the shores of Lake Izabal on edge.

Protest leaders laid low and refused to meet for interviews, afraid authorities would find them. Average citizens were stopped, questioned and frisked by authorities.

Protesters had been blocking highways for days, keeping trucks from reaching the site. Some threw rocks and police responded with tear gas to clear the road Saturday. On Monday, the trucks moved in and out unimpeded.

Daniel Mac, a 22-year-old farmer, complained that the mine was polluting the area. “The roofs are rusted, the dust is corrosive and the fish die in the lake.”

But Emilio Jalal Tzoc, 67, a local fisherman and former worker at the mine, said that “the company doesn’t affect us, it helps the people.”

He said the money workers earned at the mine circulated throughout the community. “Those behind (the protests) aren’t from here,” he said.

According to the World Bank, poverty grew to 47 percent from 45.6 percent in Guatemala in 2020. It said the country had the fourth highest rate of chronic malnutrition in the world and the highest in Latin America and the Caribbean.