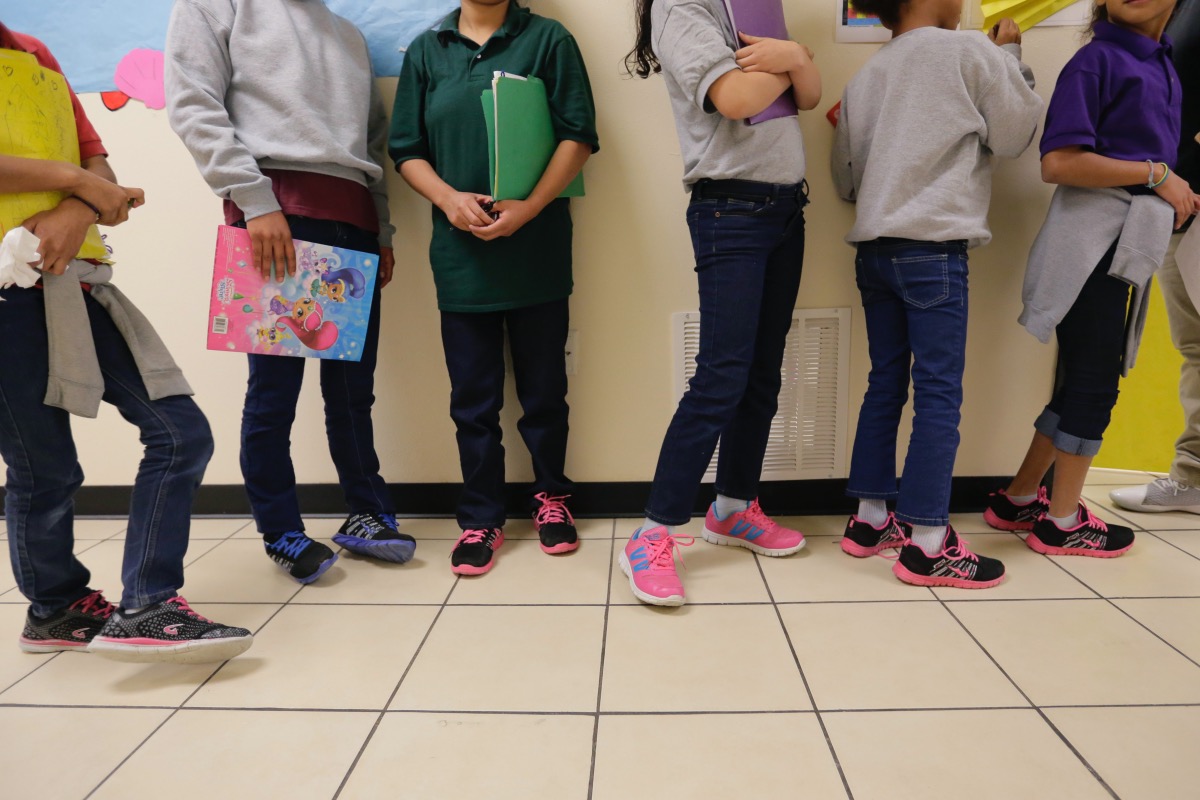 Migrant teens line up for a class at a “tender-age” facility for babies, children and teens, in Texas’ Rio Grande Valley, in San Benito, Texas, August 29, 2019. (AP Photo/Eric Gay)

In 2018, I worked with a 15-year-old unaccompanied, undocumented child who was released to the care of a close relative—not a biological parent or legal guardian.

The child worked long hours at a factory but the relative took all the money. Reports were filed, and state and federal agencies sprang into action to ensure the minor’s safety. However, because the child did not technically have a legal guardian and the relative had custody, the minor was forced to stay in that situation… until they ran away.

As a former case manager, supervisor, and director, I worked with hundreds of migrant children, mostly arriving at the southern border unaccompanied, and I watched the media focus on the processing and care of these minors as they navigated through divisions of the Department of Homeland Security (DHS) and the Department of Health and Human Services (HHS).

We learned about minors being housed in a “hielera,” or ice box, the nickname for the cells used by Customs and Border Patrol (CBP). We learned about minors experiencing physical and verbal abuse, kept squalid facilities, and denied appropriate nutrition. We know that many suffered traumatic situations in their home countries which prompted their journeys north, or endured traumatic incidents during the journey itself, or even both.

Ideally, minors are transferred to Office of Refugee Resettlement (ORR) custody within 72 hours, a regulation that has been increasingly difficult to meet due to the unprecedented surge of minors and the limited bed capacity at state-licensed facilities. When in ORR care, minors normally receive various services including educational, medical, and mental health care.

But we never see what happens next, and that can be the most dangerous part of the journey.

While in ORR care, sponsors are located and vetted based on their relation to the minor and the complexity of the case. A sponsor can be a parent, legal guardian, relative, or other adult. The qualifying sponsor must submit a reunification packet consisting of an application and accompanying documents.

Once the relationship between the sponsor and minor is verified and security checks are completed, the minor is released to the care of the approved sponsor. Ideally, the minor remains under the sponsor’s care until their immigration case is resolved.

Here’s where major problems can start. When released, many minors lose access to the basic services they received under federal care.

While being in custody seems bad, the unfortunate truth is unaccompanied minors fall through the cracks when official government agents or individuals do not take legal responsibility for them. This lack of guardianship results in difficulties obtaining needed services, as well as a higher potential for abuse and neglect and the inability for current systems to respond.

In a separate case I supervised involving a medical provider and a state child welfare agency, an unaccompanied minor got lost in the gray area when they were hospitalized due to mental health concerns. The minor refused to be released to the sponsor’s home—as in the other case, the sponsor was not a parent or legal guardian. To the hospital social worker’s dismay, hospital safety policies would not allow the release of the minor without a safe placement. The hospital contacted the state child welfare agency, which was unable to mandate the sponsor re-assume custody because the sponsor had not completed the process to become the minor’s legal guardian.

Additionally, the minor resided in a state that does not afford them access to public health insurance, thus, the hospital social worker, state caseworker and I had serious concerns about the minor’s continuity of care. The hospital was unable to release the minor for over two months while the state child welfare agency worked to locate a relative who was willing to apply for guardianship and assume custody. Ultimately, the minor was taken into state custody because the current sponsor refused to apply for guardianship and no additional relatives could be located.

From my experience, sponsors tend not to comply unless advised to do so by their immigration attorney (if they have one). The main reason I encountered for non-compliance was fear—undocumented people rarely wish to engage with any court system, much less voluntarily. While the Sponsor Care Agreement states approved sponsors who are not the minor’s parent or legal guardian must “make best efforts to establish legal guardianship … within a reasonable time,” without reliable data on minors’ post release, it is impossible to know what percentage of sponsors comply. Furthermore, a report from the Government Accountability Office report, published in October 2020, noted ORR continued to lack a reliable and accessible data collection system for collecting post-release data.

With no one looking after them, these unaccompanied minors live in a shadow world. They may be enjoying a better life than the one they left behind, but they also could be victims of labor or sexual trafficking, suffering from physical or mental ailments, or be rejected by their sponsors and left homeless to fend for themselves. We have no way of knowing.

Two key pieces of the immigration puzzle need to be solved in order to better account for unaccompanied minors. First, the unspoken fear and distrust in undocumented communities where sponsors primarily reside needs to be addressed. This is no easy task and goes far beyond policy measures.

Second, coordination between the Department of Health & Human Services and state agencies and other providers needs to be strengthened to ensure better continuity of services for unaccompanied minors. Senators Robert Portman and Thomas Carper echoed many of these concerns in their letter to the secretaries of the Departments of Homeland Security and Health & Human Services.

While coordination between federal and state agencies on this scale will undoubtedly be a monumental task, it is necessary to ensure the safety of these minors. At this time, many providers work in silos, focusing on just one facet of the process. Bringing stakeholders together to discuss trends and the unmet needs of undocumented populations can serve as a first step to spark innovative solutions.

Vanessa Diez is currently a Master of Public Administration student at John Jay College of Criminal Justice, CUNY, where she holds a fellowship with the Initiative for Gender Equity in the Public Sector. She has over a decade of experience in unaccompanied minor case management and oversight of immigration policy implementation across the United States.