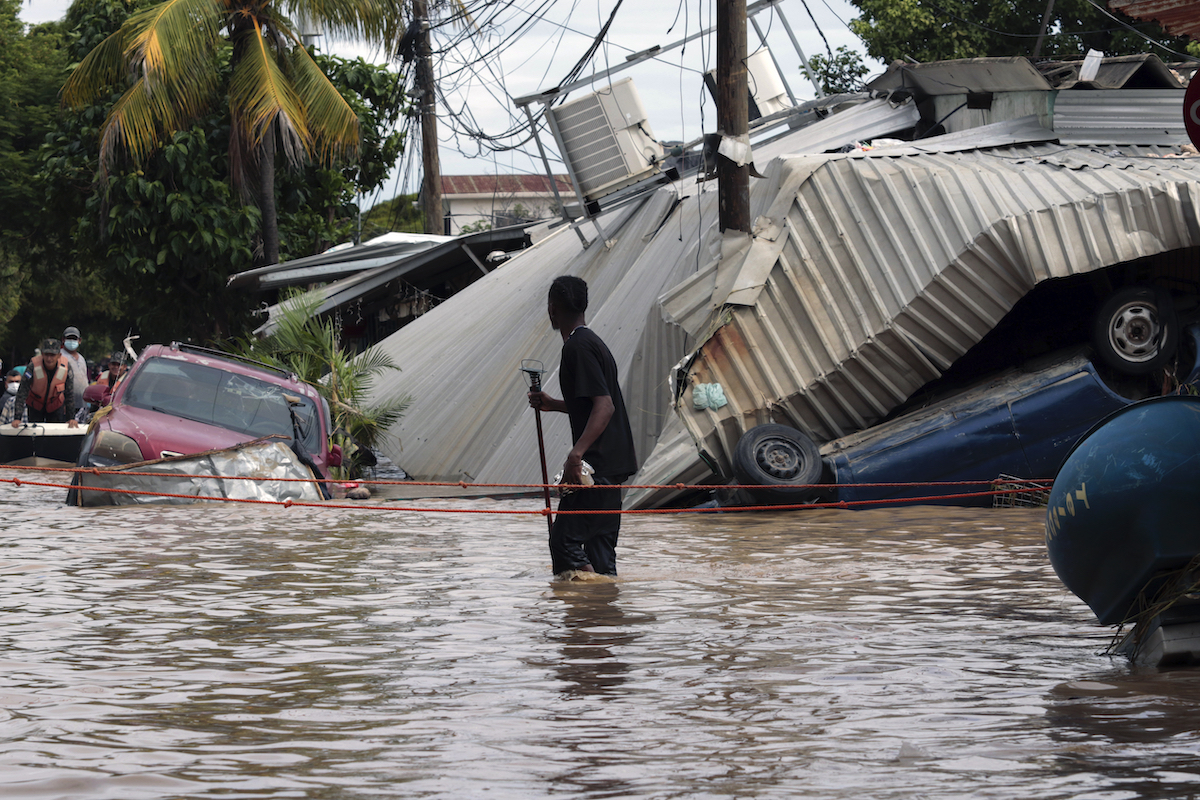 In this November 6, 2020 file photo, a resident walking through a flooded street looks back at storm damage caused by Hurricane Eta in Planeta, Honduras. (AP Photo/Delmer Martínez, File)

It’s been a terrible century or so for Central America, but last year was especially rough.

After being ravaged by a global pandemic that saw much more developed countries like the United States and Spain brought to their knees, two Category 4 hurricanes —first Eta then Iota two weeks later— tore through the region in November and washed away what little the people were clinging to for survival. Over 230 people died and more than 140 were never seen or heard from again.

Both storms caused an estimated $10 billion worth of economic damage in Honduras alone, or almost 40 percent of the country’s entire GDP.

Honduras, of course, is not an economically strong country to begin with. If it were, I’d probably be writing this from Tegucigalpa, as my grandmother might not have deemed it so necessary to pack a suitcase and pray for the best in a city she’d never heard of (Chicago) in a country whose language and culture she knew nothing about. No one leaves their homeland, especially if it’s a paradise, unless there’s no honest way to make a living.

Honduras is poor because the United States likes it that way. As the original “Banana Republic,” Honduras is what’s known as a “neo-colony,” which means that it’s officially its own country, with its own government and control over its own economically, but it really acts like a colony of a much larger, much richer, much more powerful country, in this case the United States.

In her 2007 book, The Shock Doctrine, Naomi Klein points to Honduras as a prime example of how, rather than working to lift Latin America and other underdeveloped (or overexploited) regions back onto their feet when disaster hits, global capitalism instead swoops in to pick at the carcass. Hurricane Mitch, the deadliest Atlantic storm in over 200 years, ripped through Honduras in late October of 1998, killing more than 7,000 catrachos, another 3800 in Nicaragua, and hundreds in El Salvador and Guatemala. In addition to the terrible human cost was an economic loss of over $6 billion in damages across Central America.

The president of Honduras, the fourth-poorest country in Latin America at the time, said that Mitch had undone 50 years of economic development in less than 72 hours.

“Many people stated that Honduras was devastated by Hurricane Mitch, but the word ‘devastated’ does not really convey the depth and breadth of its adverse impacts,” reads a 2000 report from the Society for Risk Analysis. “About one-third of Honduras’s total population of 6 million was negatively affected…. [T]he damage to Honduras’s infrastructure was estimated at the time to be 90% of the country’s total. Ninety percent of its roads suffered some degree of destruction. Banana plantations, one of the mainstays of the Honduran economy and a source of one of its key export crops, were destroyed—at first by the winds and floods and later by standing and contaminated water in the fields.”

The country’s powerful elites, swayed one way or another by foreign business interests, passed sweeping pro-business reforms, privatizing key sectors such as the trade and transportation infrastructure along with the telephone company. The government undid land reforms, creating an even bigger and poorer class of dispossessed campesinos and Indigenous, and made changes to the mining industry that ushered in a new era of intense extraction.

These neoliberal policies have continued more or unless unabated up until today, having suffered only a minor hiccup during the presidency of Manuel Zelaya, who dared promise the people that he would institute a new round of land reforms and review land titles held by the dispossessed—though he was quickly removed by a military coup orchestrated by the country’s business elite and practically endorsed by then-U.S. Secretary of State Hillary Clinton and the Obama administration. Today the green-eyed dream of seeing all of Honduras in private hands is a mere step or two from coming into fruition with the creation of so-called “private cities,” or Economic Development and Employment Zones, where Honduran law does not apply.

And now Honduras and the rest of Central America face a menace even greater than neocolonialism —climate change. Central Americans can thank the United States for that, too, since with only 4.25 percent of the world’s population, Americans contribute around 15 percent of global CO2 emissions— some estimates put it as low as 11 percent, while others are as high as 18 percent.

The climate crisis has two main effects on Central America. The first and most persistent is drought. In what is now known as the “corredor seco,” a dry corridor stretching a thousand miles from Chiapas down through Nicaragua, farmers are battling the driest growing seasons most have seen in their lifetimes. Millions have suffered crop losses in recent years, made worse not only by the increasing frequency and magnitude of storms, but also by la roya, a fungal disease known as “coffee rust” that caused more than $3 billion in economic damage between 2012 and 2017, forcing nearly two million farmers off their land.

Honduras is the fifth largest exporter of coffee in the world, though its production is expected to drop 12 percent from last year—which was already a low year due to the storms, the drought, and the rust.

The Cavendish, by the far the world’s most popular banana and a staple Honduran export, has also come under attack from Panama disease, caused by a strain of fungus related to the one that nearly wiped out the world’s entire supply of the Gros Michel, which had once been the most popular banana in the world before growers were forced to find a replacement.

While Honduras may be the Banana Republic, it isn’t the only one. Costa Rica exports more bananas than any of its Central American neighbors, a little more than $1 billion worth every year, followed by Guatemala, with $930 million, and then Honduras, with $531 million.

No coffee and no bananas would spell an Apocalyptic scenario for farmers across Central America.

Nearly 11 million people in Central America lost the ability to support themselves and their families in the aftermath of hurricanes Eta and Iota last year. More than five million Central Americans were left without homes, jobs, or access to drinking water. Eight million people in the region suffer severe food insecurity, not knowing when or how their next meal will come.

Migration from Central America increased by more than 500 percent between 2010 and 2015, and at least a third of all migrants cite climate-related reasons for leaving their homelands.

It’s clear that as the climate crisis grows more critical, so too will the migrant one.

Around two million people in Central America are expected to be displaced by climate change by the year 2050, according to the World Bank. In Guatemala, rainfall is projected to drop as much as 60 percent in some areas, with researchers predicting the yields of some staple crops to fall by a third by 2070. A fall in crop yields by a third half a century from now may not sound too bad, but keep in mind that Guatemala’s population will be a third larger by then, at least.

If all of this weren’t bad news enough for Central America, the tens of thousands of migrants who are forced to brave the trek north every year arrive in the United States and take jobs —the only ones they’re allowed to take— that are themselves made ever more brutal by a warming climate and worsening air pollution.

“If we think about the people that are suffering the worst impacts of climate change right now in the United States, the answer is clear: communities of color, Latinos and in particular immigrants,” Antonieta Cadiz of Climate Power tells me. “They live in the areas that are most impacted by climate change and are the ones less likely to recover after a climate disaster.”

“The Build Back Better Act has a strong commitment to environmental justice, precisely to help communities like Latinos struggling with drought, working in the fields under extreme heat and dealing with the aftermath of a hurricane,” says Cadiz. “This legislation includes $162.9 billion to advance environmental justice priorities.”

Maybe because most hail from places already plagued by its symptoms, Latinos, for their part, are huge believers in climate change and support policies that address it as the serious, species-level threat that it is.

“An overwhelming majority of Latinos (86 percent) support a legislative package that puts America on the path to cut climate pollution in half by 2030, according to a poll from BSP Research and Climate Power,” Cadiz says.

“Seventy percent of Latino voters in the country think that extreme weather events are a direct result of climate change, with 79 percent saying it’s getting worse,” she adds. “Climate change is also a big issue for Latinos at the polls and is holding nearly as great of importance as the DREAM Act. Fifty-five percent of respondents said they’d be unlikely to support a candidate if they didn’t advance climate action, while 57 percent said the same of candidates opposing the DREAM act.”

I’ve attempted here, in about 1500 words, to show why we’re seeing waves of Central American migrants at the U.S.’ southern border, and how much of the political, economic and environmental instability they’re fleeing was and continues to be produced by the United States. The Central Americans are desperate to come here because the North Americans have made their homeland virtually unlivable. I haven’t even mentioned America’s massive drug addiction that fuels the drug trade further destabilizing the region, or the guns and gangs that find their origins in American cities.

So if Americans want to see an end to families and unaccompanied children arriving at our door, begging for sanctuary, or if they fear criminals sneaking in, then the United States needs to finally be the “Good Neighbor” it only pretends to be and help its neighbors repair their homes—especially since most of the damage was done by America itself.