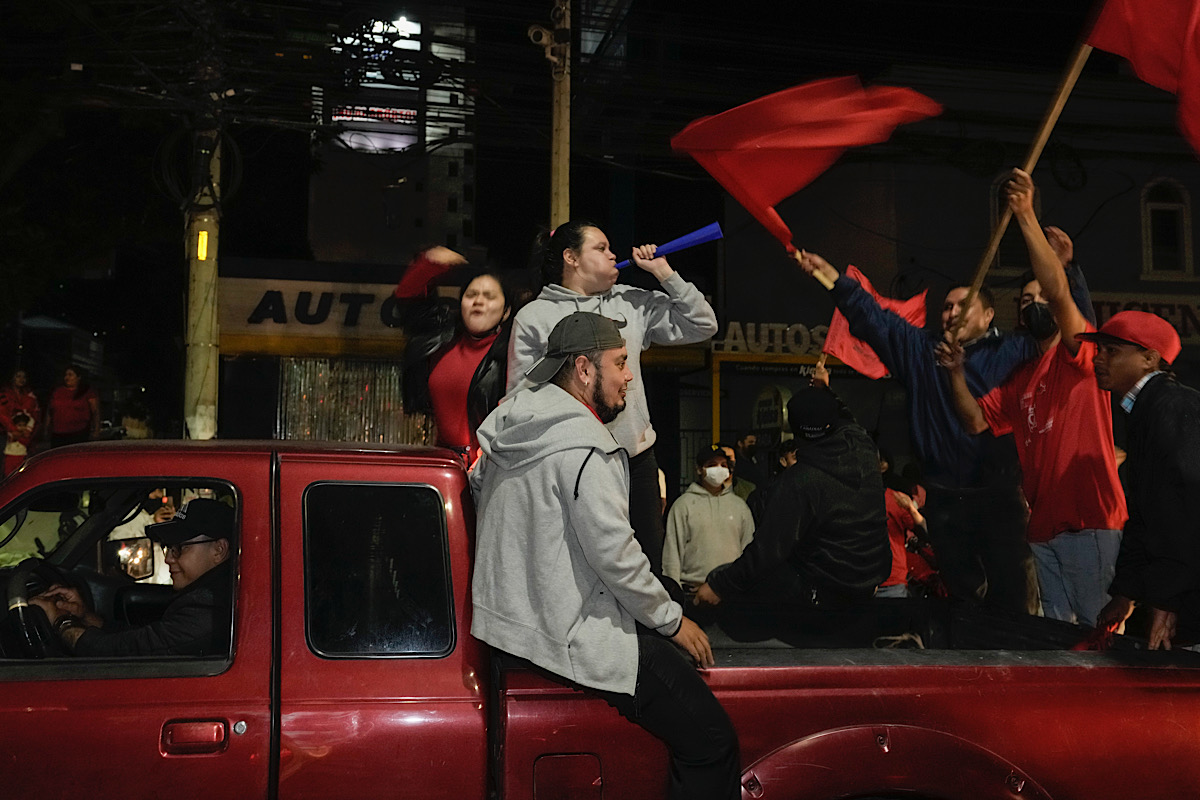 Tegucigalpa Mayor Nasry Asfura, presidential candidate of the National Party, said in a statement that he had personally congratulated Castro, despite only about half the voting tallies being counted from Sunday’s election.

The former first lady had 53 percent of the votes and Asfura 34 percent, with 52 percent of the tallies counted, according to the National Electoral Council. It has 30 days from the election to declare a winner.

Asfura said he had met with Castro and her family.

“Now I want to say it publicly,” the conservative candidate said, “that I congratulate her for her victory and as president elect, I hope that God illuminates and guides her so that her administration does the best for the benefit of all of us Hondurans, to achieve development and the desire for democracy.”

“The United States congratulates the people of Honduras on their election and Xiomara Castro on her historic victory as Honduras’ first female president,” Blinken said in a statement. “We look forward to working with the next government of Honduras.”

Castro said via Twitter that Asfura had recognized her triumph. “People, I am not going to fail you!”

Asfura’s recognition of the outcome was a relief to many Hondurans who had feared a contested election after a debacle in 2017 led to street protests that left 23 people dead. Following that vote, the government imposed a curfew and only three weeks later declared now-outgoing President Juan Orlando Hernández the winner despite the Organization of American States observation mission calling for an election re-do.

Fearing a similar prolonged vote standoff and social unrest, many businesses in Honduras’ capital had boarded up their windows for this election.

Mabel Plata, a 28-year-old nursing student, said she appreciated Asfura’s recognition of the outcome. “It is a sign that he is a professional and polite person and went to see Xiomara for the good of the country.”

Plata couldn’t remember another who did the same. “Most always claim to be winners and it’s hard for them to accept defeat.”

Luis Guillermo Solís, former president of Costa Rica and head of the Organization of American States observation mission, said Tuesday in presenting the regional body’s preliminary report that Hondurans had overcome some technical difficulties to vote in great numbers.

“Honduran society voted with conviction, happiness and responsibility in a context marked by the pandemic and violence, which was denounced opportunely by the mission,” Solís said. He said the mission had not received reports of other irregularities or fraud.

Castro rode a wave of popular discontent with 12 years of National Party governance, which peaked in Hernández’s second term.

She will face major challenges as the Central American country’s president. Unemployment is above 10 percent, northern Honduras was devastated by two major hurricanes last year and street gangs drag down the economy with their extortion rackets and violence, driving migration to the United States.

On Tuesday, Vielka Yossira López folded jeans at a stand in the sprawling Comayaguela street market.

The 24-year-old single mother of two said she didn’t vote, but hoped for change.

When López contracted COVID-19, she wasn’t able to work for two months. In that time she sold her bed, her refrigerator, television and cellphone so she could buy food and diapers for her children, ages three and six.

López makes 200 lempiras, about $8.25 per day. She pays $1.60 of that just for transportation to and from work each day. Her six-year-old has been out of school for more than a year.

López is hopeful that when Castro becomes president she will bring with her a better understanding of what it takes to raise a family.

“Hopefully there will be a change by having a woman,” López said. “She has children and everything.”

Castro’s government could present challenges, but also opportunities for the Biden administration, which has sought to keep Hernández at arm’s length.

Many Castro supporters remember the U.S. government’s initial sluggishness in calling the ouster of Castro’s husband Manuel Zelaya from the presidency in 2009 a coup, and then proceeding to work closely with the National Party presidents who followed. And from the U.S. perspective, Washington remembers how Castro and Zelaya cozied up to then-Venezuela President Hugo Chávez.

Analysts say common ground between Castro and the U.S. government exists in at least three areas: immigration, drug trafficking and corruption. And with tense relations prevailing between Washington and the leaders of El Salvador and Guatemala, the U.S. government could use a productive relationship with Honduras.

Despite opponents’ efforts to paint Castro as a communist, experts expect her to govern as a centrist with a desire to lift up Honduras’ poor while attracting foreign investment.

A speech Castro made to her Liberty and Re-foundation party in June remains one her clearest expressions of how she will navigate the U.S. relationship.

“In the first 100 days, we will execute and propose to the administration of President Joe Biden and Kamala Harris a plan to combat and address the true causes of migration,” Castro said.

Castro describes Hondurans’ emigration in terms of flight to escape inequality, corruption, poverty and violence. That sounds a lot like Harris’ assessment of the root causes the Biden administration wants to focus U.S. aid on.

But Castro also puts some of the blame on the U.S. government.

“I believe the Biden administration has an enormous opportunity to address the issue of migration,” Castro said in the June speech. “First, recognizing that they have part of the responsibility for what happens in our country,” she added, noting the 2009 coup.

Castro has hammered the outgoing Hernández administration for corruption. It was Hernández’s administration that let the Organization of American States’ anti-corruption mission in Honduras expire in 2020 after its work had touched some of the National Party’s lawmakers for alleged misuse of public funds.

She has said she’s interested in having an international anti-corruption mission return to Honduras. That combined with a strong, independent attorney general, could begin to tackle one of the country’s most profound problems.

U.S. federal prosecutors have put corruption under the microscope in drug trafficking cases that have reached up to high-ranking Honduran politicians. The most notable was the conviction of Hernández’s brother, a former federal lawmaker, on drug trafficking charges that earned him a life sentence in the United States.

In a speech late Sunday night, Castro told supporters: “Get out war! Get out hate! Get out death squads! Get out corruption! Get out drug trafficking and organized crime!”