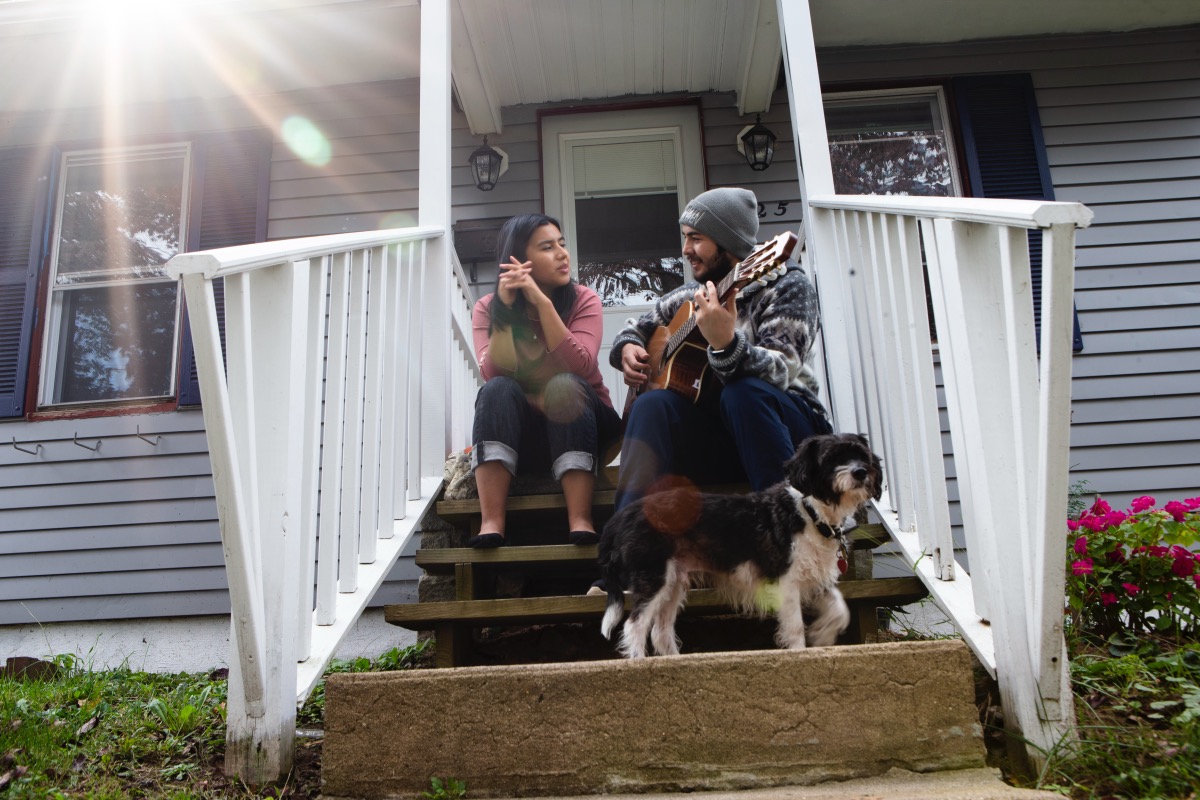 When Stephanie Maribel Albarracín, 24, met Miguel Ángel Orellana Ramírez, 26, on August 15, 2014, she wasn’t thinking about marriage, let alone marrying an Ecuadorian living in Ecuador. At the time, she was 17 years old and already in a relationship in the United States, where she lived. She had come to El Pan, in southern Ecuador, as she did each summer, only to visit; her family had emigrated from the region in 1989. Like Stephanie’s parents, Miguel was also from El Pan.

For Miguel, however, it was love at first sight.

The youngest of three siblings, Stephanie, was the first member of her family to be born in the United States, in Queens, New York. “I was the first in my family to have papers,” says Stephanie.

Her father left Ecuador in 1989, via El Salvador and Mexico, taking countless buses and crossing the desert on foot. His trip to the United States was supposed to be temporary, no more than two years until he saved the money to go back to Ecuador and open a business. But Stephanie’s mother decided to come to the United States, too, bringing with Stephanie’s older sister. They crossed via the Rio Bravo, a long and dangerous journey. 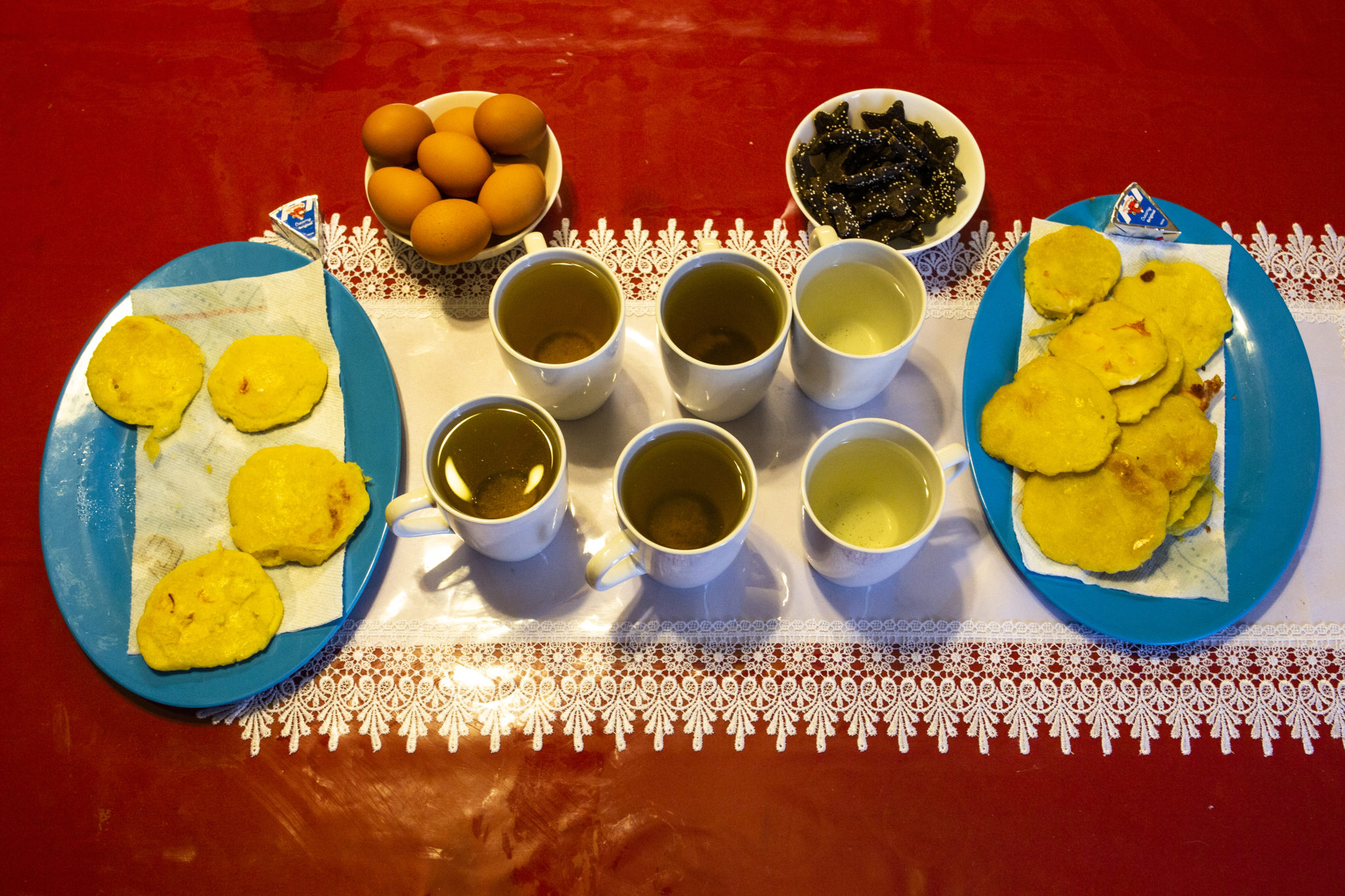 Stephanie’s last breakfast with her parents before moving out of her childhood home in Queens, New York, February 20, 2020. They enjoyed a traditional Ecuadorian breakfast of arepas (corn and cheese patties), eggs, marmalade, and tea. (Benjamin Chambers/Latino Rebels)

But even as they decided to raise their family in New York City, it was important for Stephanie’s parents that their children know where they come from. To keep them connected to Ecuador, the family traveled every summer to El Pan. Those trips deepened her love for Andean music and dance.

At 13, Stephanie began dancing and joined a folk dance group. But she became disenchanted with the group, feeling that she was participating in an act of cultural appropriation since she is not of that ethnicity and culture. “It’s like saying they don’t exist, because it’s my representation of them,” says Stephanie. “But they do exist. They have a voice, and we have to hear it.”

Stephanie admits to having lived through two identity crises, exacerbated by Indigenous People’s Day (formerly Columbus Day), because she grew up celebrating a holiday that she later learned represented genocide. She traces the crises first to Spanish colonization and then to the United States’ intervention in Latin America, which she blames for leading to her parents’ migration.

“I felt lost. I didn’t know who I was. I didn’t know my history. That affected me a lot,” says Stephanie. “But now I know. I think it comes with maturity, when one begins to understand our values. I think it was growing pains. First, I had to identify who I was and then identify which values I wanted to maintain.” 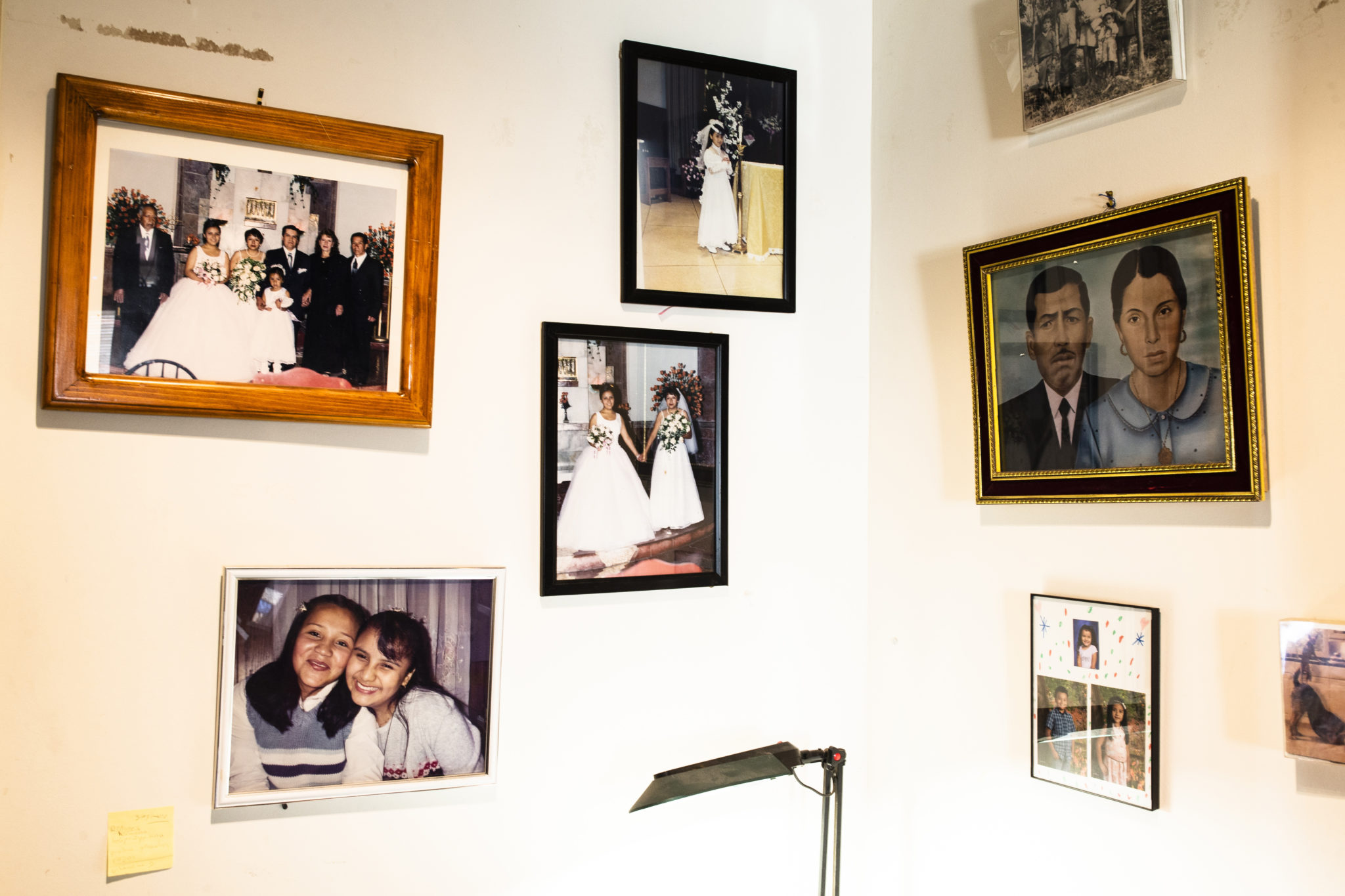 It was through this love for her heritage that Stephanie met her future husband, Miguel, at the Fiestas of San Jacinto in El Pan, where she was crowned Queen and Miguel was half of a duo playing Andean music at the ceremony.

Miguel had been nursing a broken heart that night, and just like Romeo he quickly forgot all about his heartache when he saw Stephanie. He remembers turning to his friend Lenin and saying, “Oh, wow! The queen is very beautiful. She will be the mother of my children.”

He was so moved by Stephanie that Miguel recalls adding an unplanned song into his performance that night, “Mariposita” (“Little Butterfly”) by the Bolivian group Maya Andina. 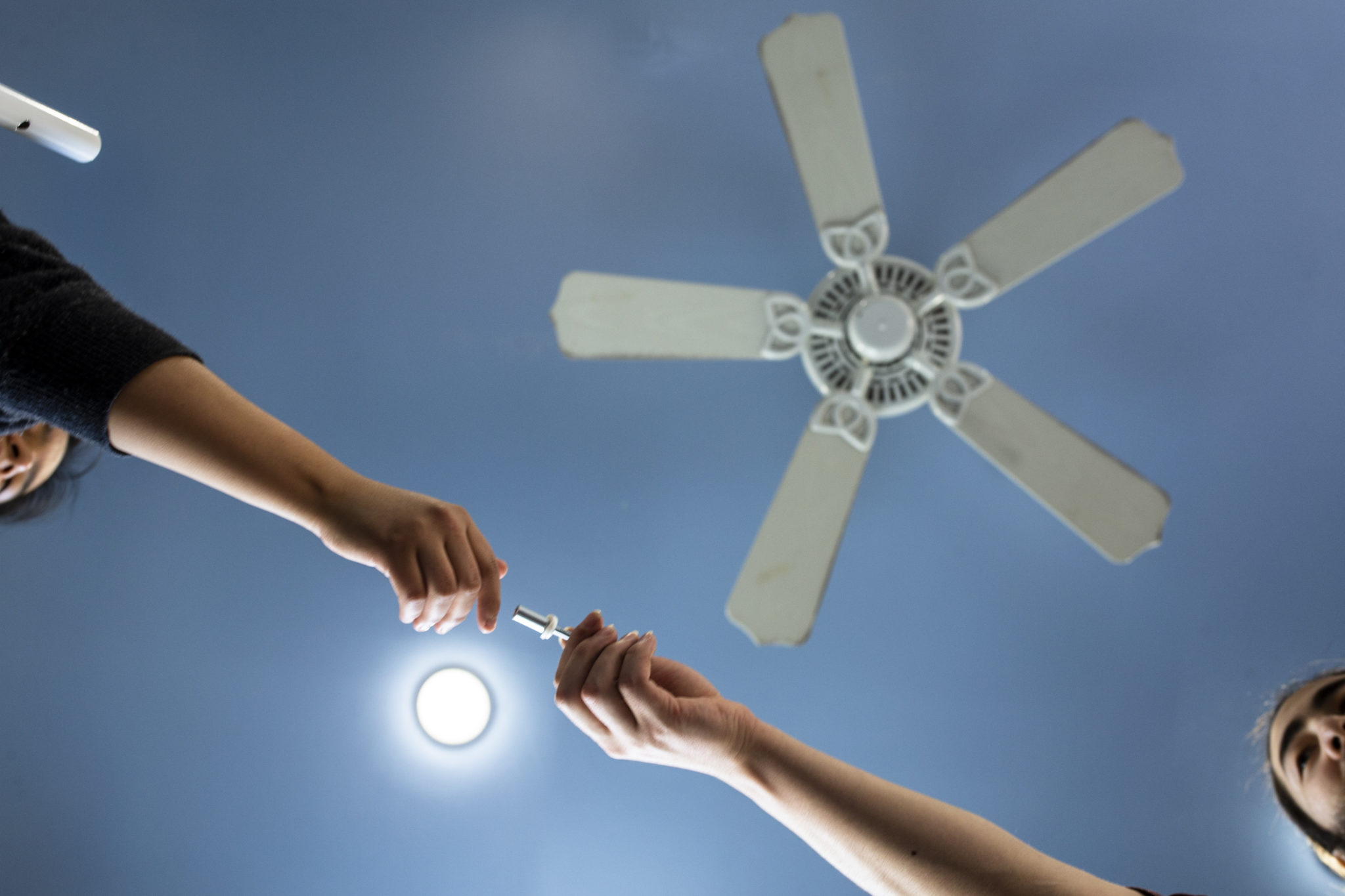 Stephanie approached him after the show to invite him to play live Andean music at her upcoming dance performances while she was still in El Pan. At the end of the summer, Stephanie returned to the United States, and they did not keep in touch.

Exactly one year later, Stephanie and Miguel met again at the Fiestas of San Jacinto, where Stephanie passed her crown to the new Queen and Miguel was there again to play music. This time he declared his love for Stephanie, but she rejected him—she still had a boyfriend.

For the next three years, Stephanie and Miguel would see each other only rarely, but Miguel never gave up hope and waited, biding his time 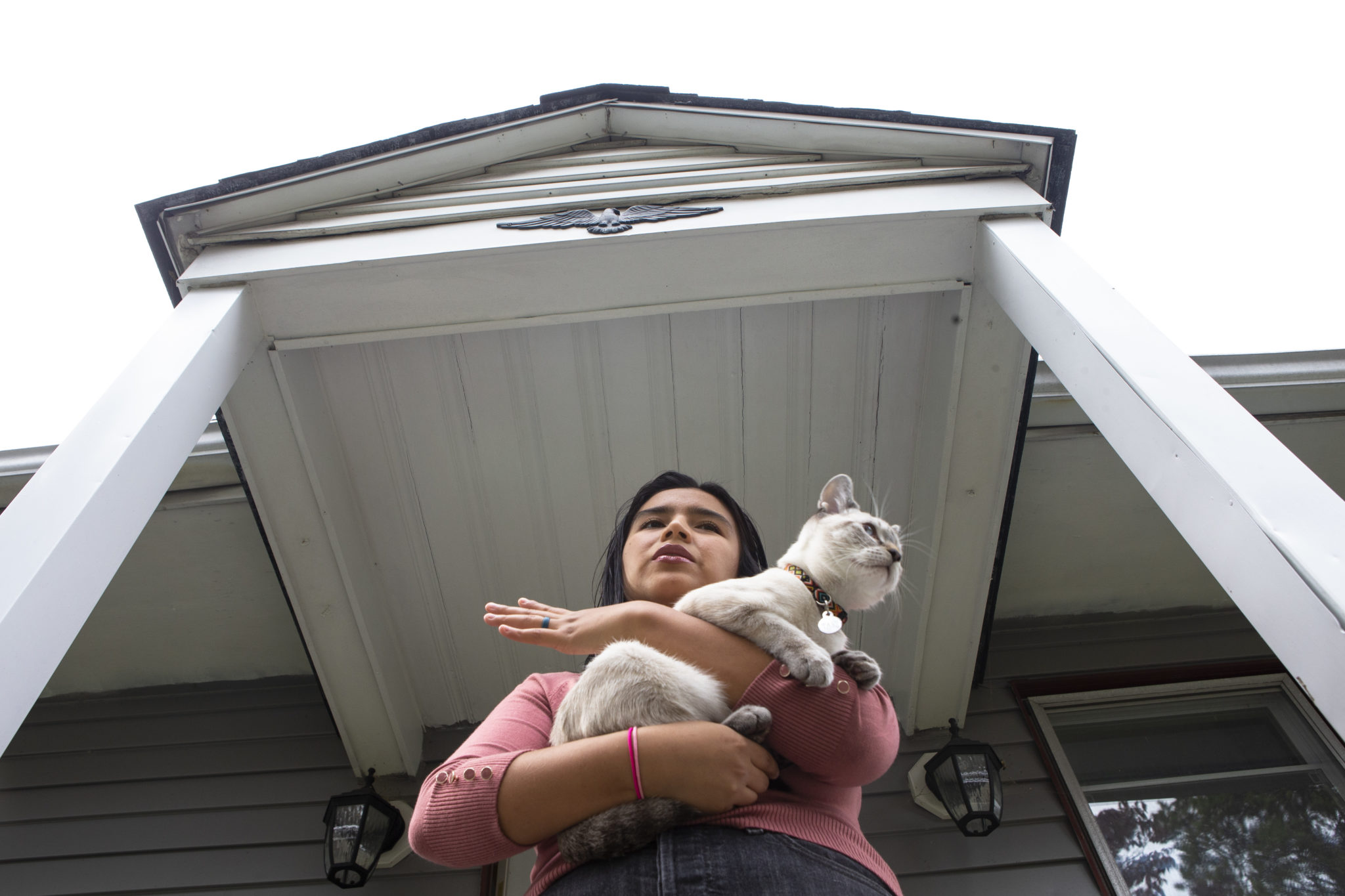 Stephanie holds her cat, Taki, while standing on the front porch of her new home in Hamilton, New Jersey, Oct. 10, 2020

Then, in 2018, they both finished college. Stephanie received her bachelor’s degree in physics and mathematics from Hunter College in the United States. She was always interested in being a CPA, but in the wake of the housing bubble burst in 2008 and the resulting Great Recession, she was cautioned from pursuing a career in finance. She had been taking physics at the time, found that she liked it, got good grades, and so decided to pursue it.

Back in Ecuador, Miguel completed his bachelor’s degree in environmental engineering at the Agrarian University in Guayaquil, Ecuador.

Earlier that year, Stephanie and a friend from the United States took a trip to Ecuador’s famed snow-capped mountain, El Chimborazo. Miguel served as tour guide and translator. Just a month later, in February, Stephanie visited El Pan for a party in honor of her grandmother. She invited Miguel, and he met her family for the first time.

It was on this visit that Miguel noticed a change.

“That night, sitting alone she and I, I played her the “Happy Birthday” song with my charango and we hugged each other,” says Miguel. “And I felt that something was flowing, something was new, something was different, there was some hope.” 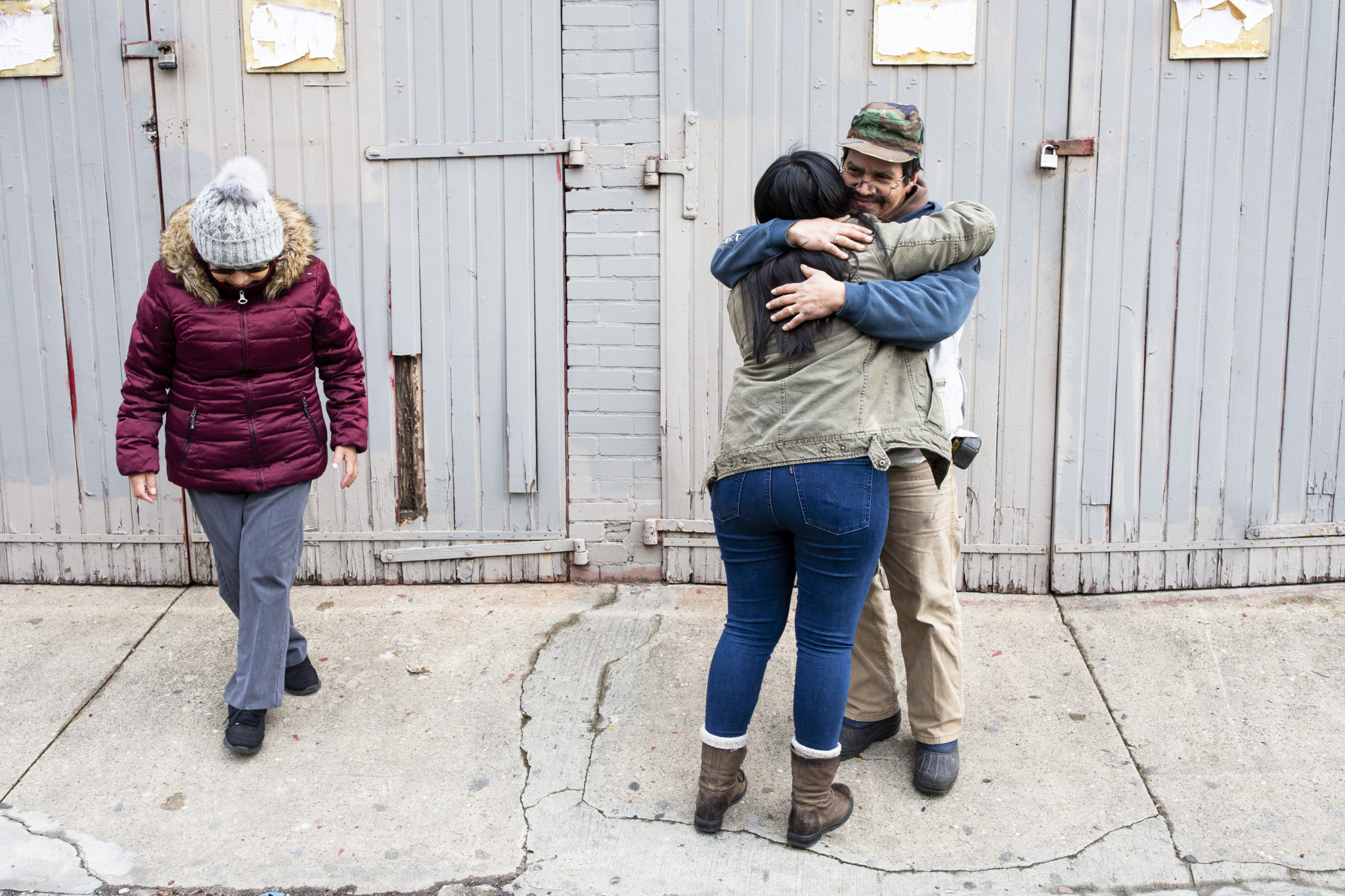 Miguel Bolívar hugs his daughter Stephanie goodbye as she moves out of her childhood home in Queens, New York, February 20, 2020. (Benjamin Chambers/Latino Rebels)

After that trip, they began texting and video chatting incessantly.

“I loved her more and I said, even if we are nothing in life, she has to be my friend at least, because of the way she celebrated when I played Andean music,” Miguel says. “She clapped, shouted and everything. I said, I like that woman.”

Exactly four years after they’d met, on Stephanie’s next trip to Ecuador in August 2018, the couple’s romance began to blossom.

Miguel had never planned to move to the United States and only moved there for love. When he arrived on October 10, 2019, despite many applications, it wasn’t easy for him to find work in his field, due in part to the language barrier and to pending work permits. But he eventually found a landscaping job, which made him happy.

Stephanie and Miguel were married less than two weeks later at the county clerk’s office in Queens. After living with Stephanie’s parents for four months, the couple moved to New Jersey on February of 2020. Their hope was that Stephanie would eventually be admitted to the PhD program in physics at Rutgers University in New Jersey. 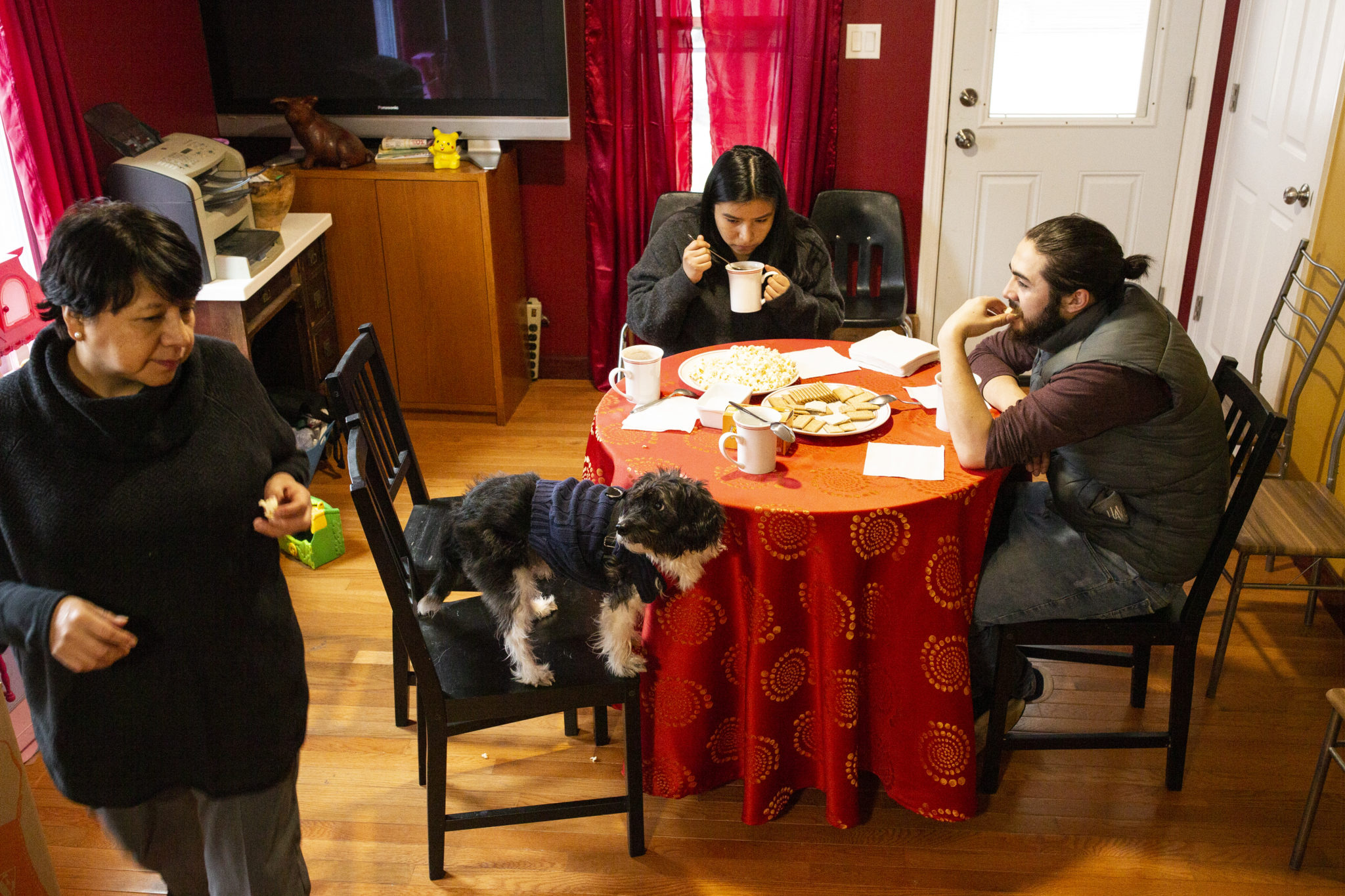 But their plans were altered. Miguel was injured in a serious car accident on September 4, 2020. He suffered neck and back injuries and had to stop working.

To help sustain their family and support Miguel’s medical treatment, Stephanie postponed applying to Rutgers and instead found a contract job in property management. The couple was forced to spend all the money they had been saving to buy their starter home, as the person responsible for the car accident was underinsured so the award that Miguel received was not enough to cover all of his medical and rehabilitation expenses.

When Miguel fell into a depression from being stuck at home and unable to work, Stephanie quit her job and the young couple decided to relocate to Ecuador, where the medical treatment and rehabilitation Miguel needed were more affordable. 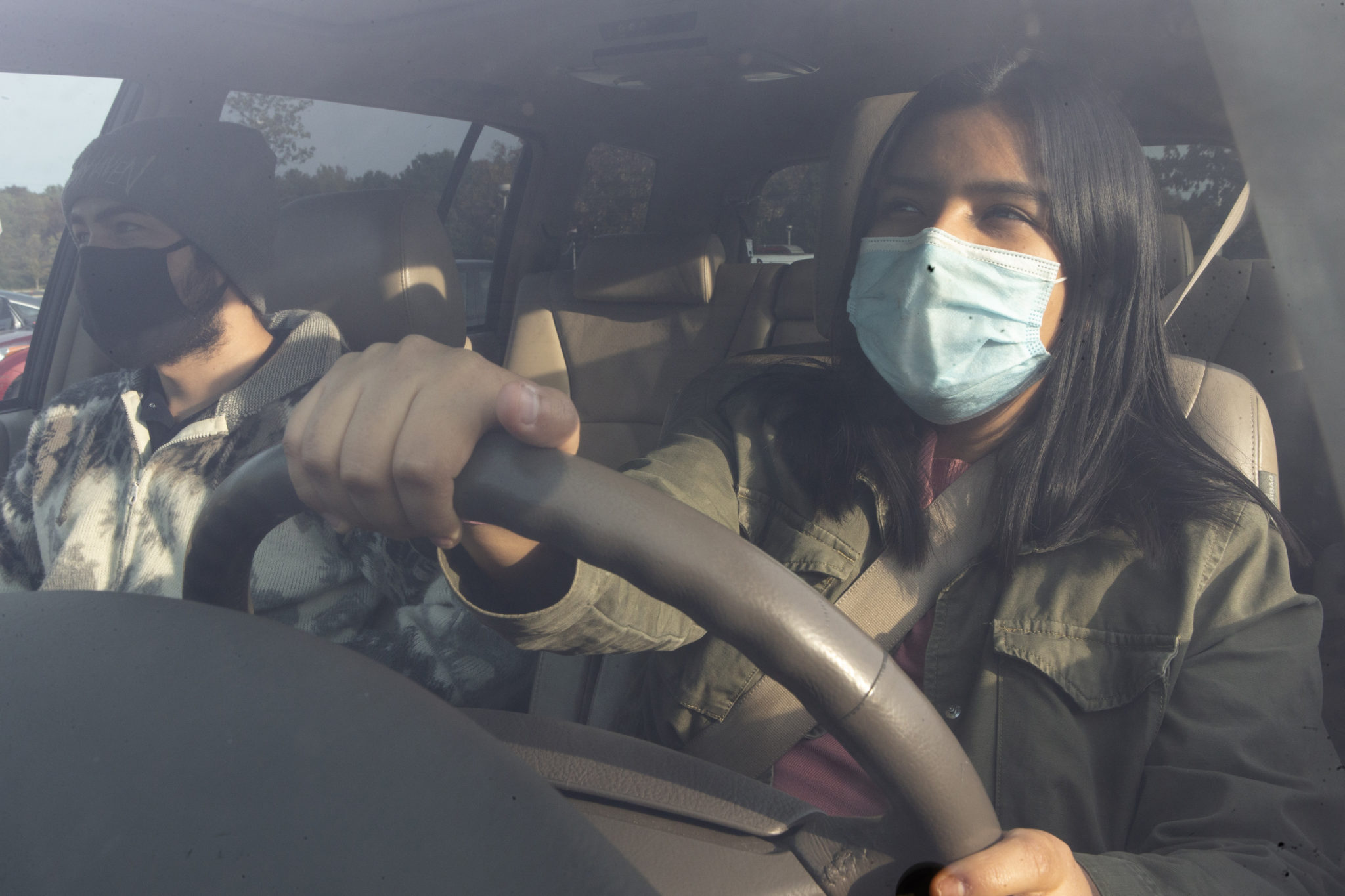 They returned to the United States on December 21, 2020, earlier than they had initially planned, because Miguel received a notice for his green card appointment. They say they will continue with their plans for the future, which include reaching their financial goals and possibly completing their graduate studies, first a master’s degree for Miguel and then that PhD for Stephanie. Or “who knows, maybe a CPA,” says Stephanie

Above all, Stephanie wants to find a job with benefits so that Miguel has access to health care.

“Our relationship is growing—we were three, now we are four! Raising a kitten brings out our differing parenting styles and the process to come to a compromise is always interesting,” says Stephanie. “Despite our challenges, we have no regrets. Life happens and we are learning how to roll with the punches together.”

Benjamin Chambers is an award-winning photojournalist from Ecuador now living in New York City. He completed a 2021 Pulliam Fellowship at The Arizona Republic, part of Gannett/USA Today Network, and earned a master’s degree from the Craig Newmark Graduate School of Journalism at CUNY in December 2020 and a bachelor’s degree in photojournalism from St. John’s University in 2019.