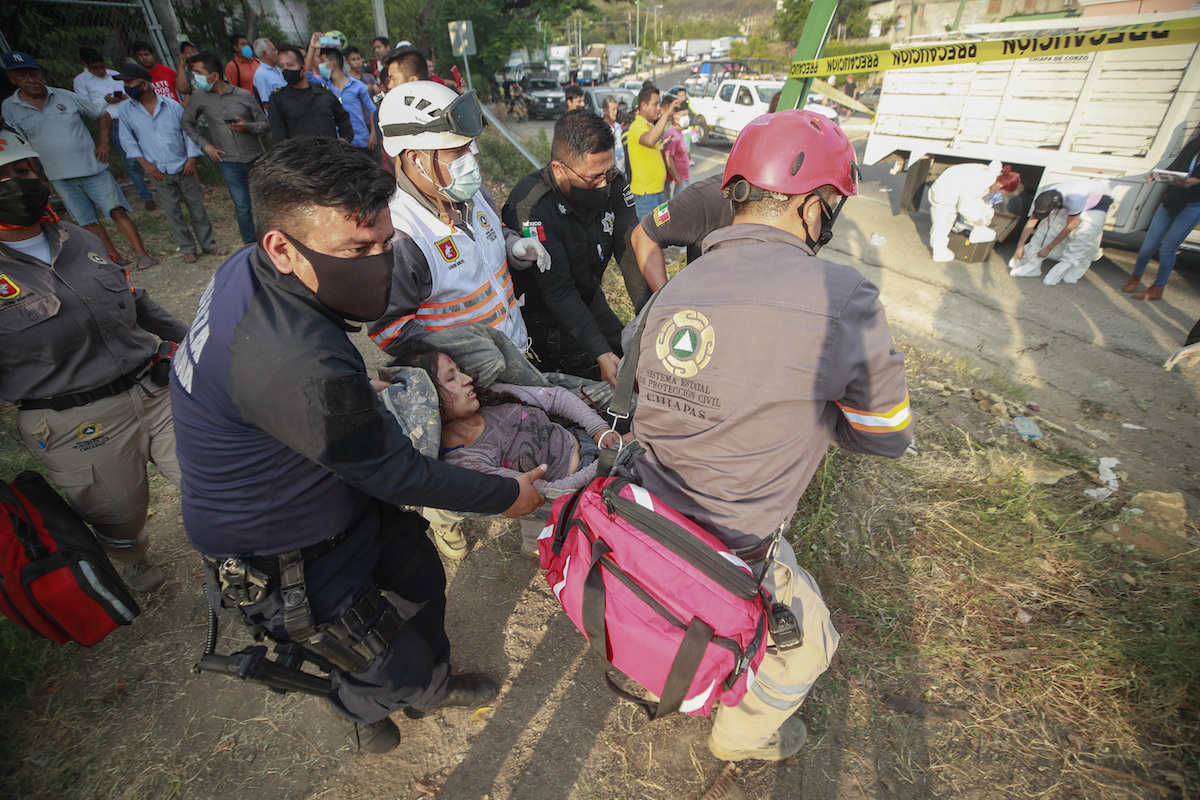 An injured migrant woman is moved by rescue personnel from the site of an accident near Tuxtla Gutiérrez, Chiapas state, Mexico, December 9, 2021. (AP Photo)

TUXTLA GUTIÉRREZ, Mexico (AP) — Survivors of the horrific truck crash in Mexico that killed 55 migrants and injured more than a hundred recounted from their hospital beds how their location inside the truck determined who lived and who died.

Those unlucky enough to be riding jammed against the fragile walls of the freight container almost certainly died, survivors said. Those in the middle of the packed group survived, cushioned by their fellow migrants as the container flipped onto the road.

“The ones who died were the ones who were up against the walls of the trailer,” said one young migrant from Guatemala, who was being treated for a broken arm at a local hospital. “Thank God, we were in the middle, but the ones on the sides, they died.”

The migrant, who did not want to give his name because he did not have proper documents in Mexico, described a gruesome scene of screaming and blood in the moments after the truck crashed into the base of a steel pedestrian bridge Thursday evening. He said about 250 migrants were on board.

First, the living had to extricate themselves from the tangled pile of dead and dying bodies.

Then came the grim task of trying to pull the wounded out.

“When I got out, another fellow migrant was shouting,” the survivor said. “He was shouting to me, I pulled at him and got him out and put him on the side of the road, but he died.”

The youth said the truck’s driver, whose whereabouts are unknown, had entered a sharp curve at a high rate of speed and lost control.

It was one of the deadliest days for migrants in Mexico since the 2010 massacre of 72 people by the Zetas drug cartel in the northern state of Tamaulipas.

While the Mexican government is trying to appease the United States by stopping caravans of walking migrants and allowing the reinstatement of the “Remain in Mexico” policy, it has been unable to stanch the flood of migrants stuffed by the hundreds into trucks operated by smugglers who charge thousands of dollars to take them to the U.S. border—trips that all too often lead them only to their deaths.

The head of Mexico’s National Guard, Luis Rodríguez Bucio, said the truck had somehow managed to avoid passing through any of the roadside checkpoints operated by the Guard and immigration authorities to catch such smuggling operations.

Sitting stunned beside the overturned trailer moments after the crash, migrant Celso Pacheco of Guatemala said the truck felt like it was speeding and then seemed out of control.

Most aboard were from Guatemala and Honduras, he said, estimating eight to 10 young children among them. He said he was trying to reach the United States but now expects to be deported to Guatemala. Authorities said migrants from Ecuador, the Dominican Republic and Mexico were also aboard.

Those who spoke to survivors said they told of boarding the truck in Mexico, near the border with Guatemala, and of paying between $2,500 and $3,500 to be taken to Mexico’s central state of Puebla. Once there, they would presumably have contracted with another set of smugglers to take them to the U.S. border.

Andrés, a migrant from Izabal, Guatemala, said he and his brother-in-law had decided together to make the dangerous trip north to the United States. Andrés was tossed from the truck as it rolled and broke apart; his brother-in-law died in the wreckage.

“We made the decision to come together, and we cheered each other on,” Andrés said. “But now, it’s terrible he’s not going to come back with me alive.”

Despite the cautionary tale, more migrants continued on the move toward the United States. On Thursday, after the accident, a group of almost 400 mainly Central American migrants walked down a highway leading to Mexico City, ignoring entreaties from immigration agents and National Guard troops to turn themselves in. They

After the crash in the southern state of Chiapas, the most severely injured from the accident were carried to plastic sheets on the road. Those who could walk were led, stunned, to the same sheets. Ambulances, cars and pickup trucks were pressed into ferrying the injured to hospitals. Later, the dead were covered in white sheets, side by side, on the highway.

Rescue workers said other migrants who had been on the truck when it crashed fled for fear of being detained by immigration agents. One paramedic said some of those who hurried into surrounding neighborhoods were bloodied or bruised but still limped away in their desperation to escape.

Pope Francis, who visited Chiapas in 2015 and has made the plight of migrants a hallmark of his papacy, sent a telegram of condolences Friday to the archbishop of Tuxtla Gutierrez, offering prayers for the dead and their families, and for the injured.

In October, in one of the largest busts in recent memory, authorities in the northern border state of Tamaulipas found 652 mainly Central American migrants jammed into a convoy of six cargo trucks heading toward the U.S. border.

Migrants involved in serious accidents are often allowed to stay in Mexico at least temporarily because they are considered witnesses to and victims of a crime, and Mexico’s National Immigration Institute said it would offer humanitarian visas to the survivors.

The agency also said the Mexican government will help identify the dead and cover funeral costs or repatriation of the remains.