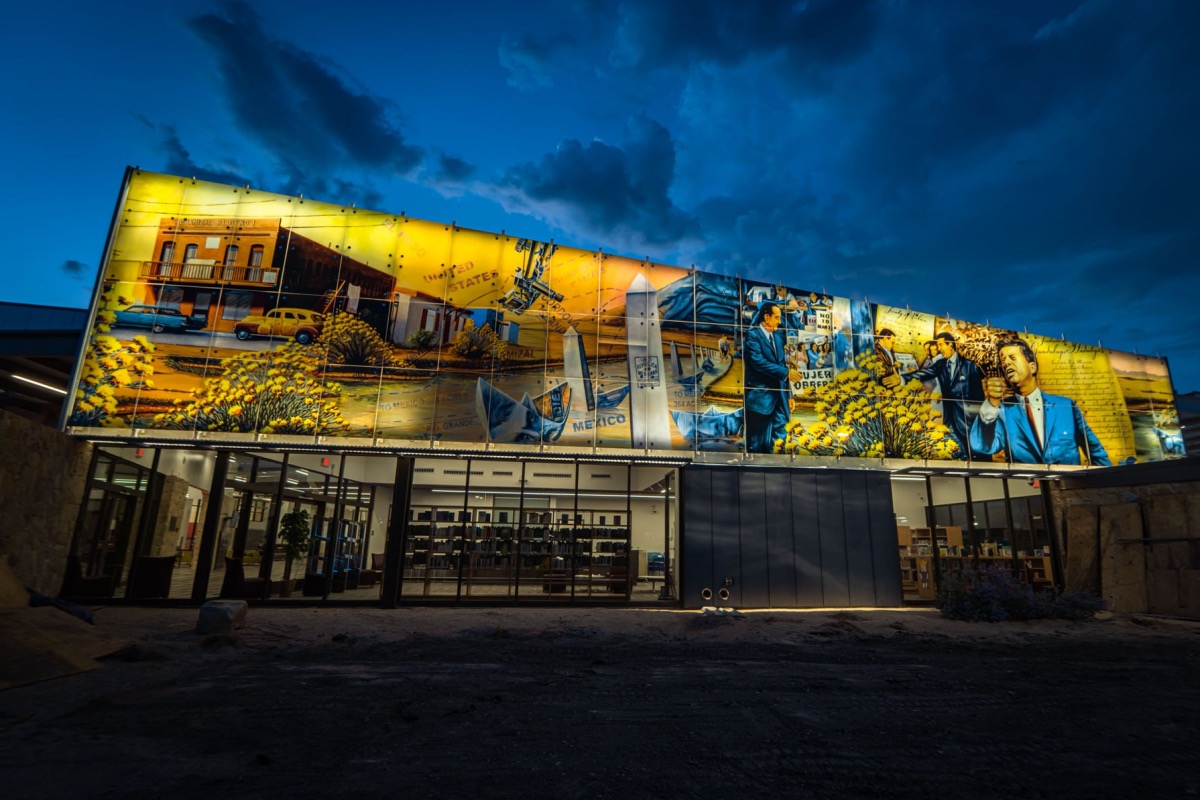 They placed the final glass panel of the mural crowning the new Chamizal Community Center in El Paso’s Barrio Chamizal on December 21. As night fell over the building, they flipped a switch and illuminated the 1,720 square feet of glass that make up the mural installation, Blurred Boundaries, depicting images of the century-long Chamizal land dispute and the 1964 treaty for which Barrio Chamizal derives its name. The glowing installation is based on a mural by local artist Jesus “Cimi” Alvarado and was commissioned by the City of El Paso as part of the 2012 Quality of Life bond program to represent the “rich history“ of Barrio Chamizal.

After seven years of researching this landmark dispute, however, I can’t help but look at Blurred Boundaries and see the same dominant narrative about the Chamizal Dispute that was established more than 50 years ago. This narrative, like all official stories and state-sponsored myths, not only centers the faces and words of white men and politicians but also insists no loose ends were left in the settlement of this conflict. Yet as is often the case with government actions of this magnitude, the official story branded in history books is nothing more than a carefully constructed narrative hinging on the erasure and omission of minority communities.

Unintentional as it may be, Blurred Boundaries is a reflection of the narrative that diminishes the Chamizal treaty’s lasting impact and still open wound of displacing 5,600 residents, the role of women-led activism in the settlement of the conflict, and the ever-shifting Río Grande that caused these “blurred boundaries” to begin with.

Instead, at the center of the mural are images of the original boundary monuments through the Río Grande, which represent the making of the U.S.-Mexico border after the 1848 Treaty of Guadalupe Hidalgo. Featured prominently is President John F. Kennedy, who initiated the historic 1964 treaty, known as the Chamizal Convention, that returned land to Mexico for the first and only time in U.S. history by redrawing the boundary between El Paso and Ciudad Juárez and fixing the Río Grande through a concrete canal along the redrawn border. Next to Kennedy, images of his successor President Lyndon B. Johnson and then-Mexican President Adolfo López Mateos shake hands after signing the treaty.

If you look closely, tucked behind Johnson is a Mujer Obrega rally against NAFTA, along with barely discernable images along the mural’s upper margins of seamstresses who worked in the borough’s Levi Factory where the Chamizal Community Center stands today. The once prolific chamizo, a yellow-flowered saltbush that is the namesake for the contested tract of land known as el Chamizal, adorns the mural throughout and contributes to its glowing presence.

Missing from the mural, however, are prominent women activist leaders like Elvira “Vila” Escajeda, who challenged the Chamizal treaty by organizing the Chamizal Civic Association, which rallied residents living in the El Paso southern barrios condemned by the treaty to successfully combat the terms of their displacement.

In my talks with the muralist in preparation for this piece, Alvarado expressed his frustration about how research on Escajeda and the residents impacted by the treaty is largely unavailable, incomprehensive, or inaccessible—three factors that made his conceptualization of Blurred Boundaries challenging and which, he suggested, led to the omission of the stories most necessary to unsettling the dominant narrative. “It was really hard to get help here, to know more of the stories because it’s not documented,” he told me by phone.

I am sensitive to Alvarado’s frustration about the challenges and pitfalls of working within a historical record that largely reflects a dominant narrative, because I know firsthand what it means to work within —and against— this one. As someone who has spent the last seven years studying this history, I can tell you this official story is overwhelmingly prolific.

It’s precisely because this story is so far-reaching that I met with Alvarado in February 2018 to show him images of Escajeda and advocate for the inclusion of the Chamizal Civic Association. Even so, he neglected to include her in his initial mock-up of the mural that was later approved by committee. “Erasing her story was not my intention,” he explained, “[But] there was no follow through on my part on that… We do need these stories… I actually do feel bad that we missed that story.”

It’s important to remember that Blurred Boundaries is not the source of this erasure. If anything, it succeeds at accurately portraying a dominant narrative and historical record that insists Escajeda and Chamizal women like her are minor characters in this history.

But this is far from the truth.

When Mayor Judson Williams announced in 1963 that all of El Paso approved of the proposed Chamizal treaty, Escajeda made it her mission to defend her community. She made her way to the Hotel Paso del Norte where Thomas C. Mann, chief negotiator for the settlement, was staying. When Mann refused to see her, Escajeda called the El Paso Herald-Post. Only after a reporter arrived and began interviewing Escajeda did Mann speak with her.

In a 2006 short film, Vila, by Arturo and Valerie Enriquez, Escajeda recalls telling Mann: “Whatever we have is not much, according to your eyes, but to us it’s our future. I planned my future and you’re destroying [it]. So, we’re not gonna accept that, and we’re gonna fight.”

At the time, the message from the City and Washington was “their loss will be El Paso’s gain.” One could draw comparisons to the messaging around today’s push to expand Interstate 10 or the effort to raze Duranguito to create a multipurpose center.

Because of Escajeda’s activism, residents received fair-market value for their properties rather than the federal government’s initial tax value offer. She was later awarded a medal by President Johnson and a special commendation from President López Mateos for her involvement in helping to more equitably settle the treaty.

But like the 1954 displacement of residents from Chavez Ravine in Los Angeles, the Chamizal treaty’s displacement of 5,600 residents through eminent domain nevertheless had longstanding consequences. In his 1970 sociological report on the Chamizal Relocation Project, Elwyn R. Stoddard acknowledged that “those residing within the disputed territory were abruptly uprooted and forcibly relocated, a traumatic episode for them which greatly altered the normal routine of their lives.”

Manuel Bañales, who was a teenager when his family was displaced, described this traumatic event in a 1975 article for El Poder de la Luz. “In the barrio, there was warmth, there was belonging, there was a sense of family,” he wrote. “Leaving was almost next to impossible.”

With the removal of Chamizal residents, the stage was set for reshaping South El Paso’s urban blueprint in ways that would usher in the uneven development that Barrio Chamizal contends with today. One of the urban planning initiatives tied to the settlement was the Cesar Chavez Border Highway. Today it is known by locals as the “Chamizal Freeway” and runs directly through where some of the Chamizal barrios once stood.

The Chamizal treaty therefore falls within an established tradition in El Paso of displacing minority people in favor of more “productive” infrastructures, the costs of which are: the dismantling of networks of support, decreased political power due to population loss, and the dispossession of assets and wealth, however modest, that leads to further marginalization and uneven development. Some of these vicissitudes are currently being confronted by a new generation of Chamizal residents in a new Barrio Chamizal and their neighborhood association, Familias Unidas del Barrio Chamizal, also led by women.

In fact, the activism of Familias Unidas to combat uneven development is largely why the Chamizal Community Center —complete with a gym, playground, bilingual library, and computer room— exists today.

None of this history, however, is represented in Blurred Boundaries.

If this mural is to reflect the communities it aims to represent, it cannot omit this multigenerational history of women-led Chamizal activism, the lasting consequences of the 1964 treaty, nor for that matter the Chicano Movement’s dicho —“We didn’t cross the border, the border crossed us— that so clearly applies to this history.

Their absence in lieu of safe, commodified images is regrettable, especially given the limited images of women in Blurred Boundaries are anonymous or relegated to the background.

The inescapable implication is that the diplomats and politicians who have shaped this region of borderlands since 1848 with little regard for the land and those who live there are more emblematic of its history than the Chamizal women and residents who demanded and continue to demand a seat at the table.

Miguel Juárez contributed to this reporting.

Alana de Hinojosa is a PhD candidate and public historian in Chicana/o and Central American Studies at UCLA. She specializes in U.S.-Mexico borderlands history and is the author of “El Río Grande as Pedagogy: The Unruly, Unresolved Terrains of the Chamizal Land Dispute” published in American Quarterly. Twitter: @alanadh_

Miguel Juárez is a lecturer at the University of Texas at El Paso and at El Paso Community College. His research focuses on highway building in El Paso, Texas. Twitter: @migueljuarez