From EL FARO ENGLISH: On Anniversary of Peace, Memory Is the Enemy 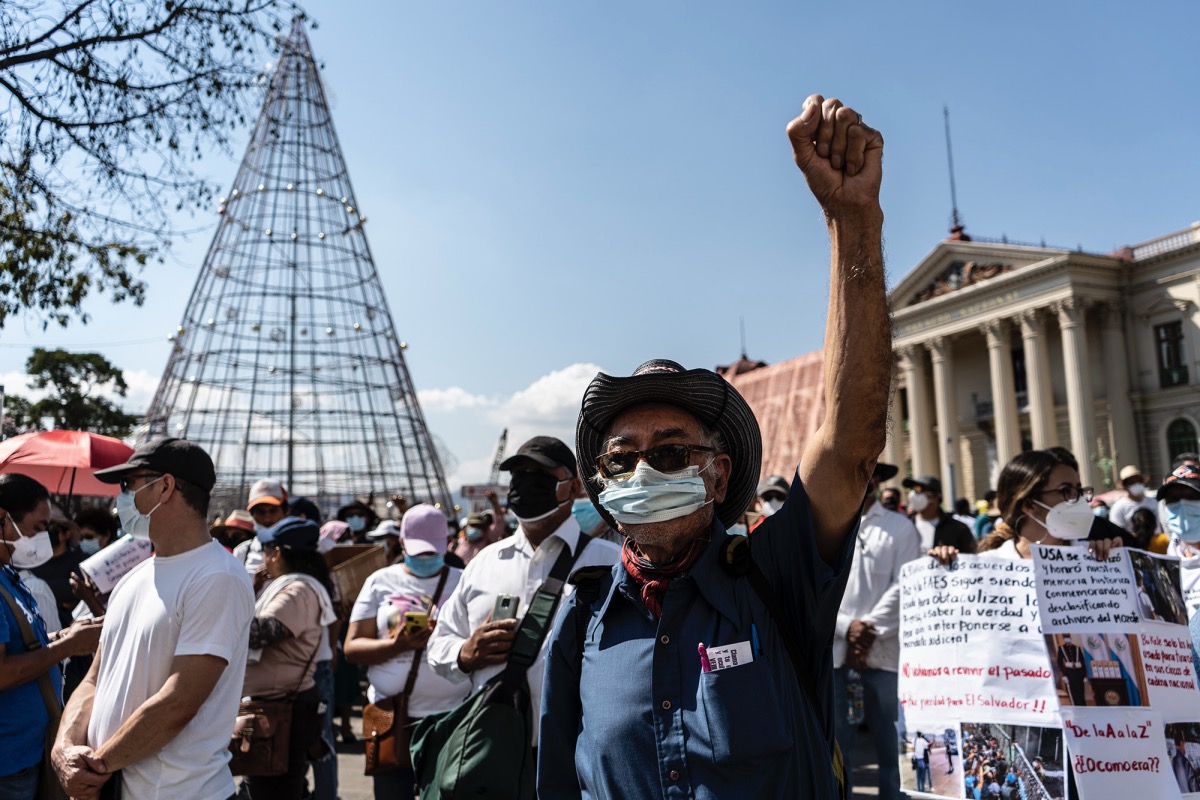 “Achieving peace wasn’t easy. After years of struggle and war, we need to respect the day and the people, family members, and friends that we lost in that era,” said Elías Romero, 79, after a minute of silence in memory of the victims and disappeared during El Salvadors 30-year-long armed conflict. (Carlos Barrera/El Faro)

Central America, in Brief: El Salvador and Guatemala just eclipsed 30 and 25 years, respectively, since the accords that ended their armed conflicts. Despite recent attacks on judicial independence in both countries and intense political polarization surrounding the landmark agreements, the courts granted new openings for two watershed civil war-era cases: in El Salvador, for the 1989 Jesuit Massacre; and in Guatemala, for the multi-year genocide against the Maya Ixil people.

On Sunday, January 16, the 30th anniversary of the signing of El Salvador’s peace accords, the government set up police and military checkpoints around the country to try to prevent Salvadorans from marching in the capital to commemorate the end of the civil war. This politicized use of the civilian police force, reminiscent of the war and prohibited by the accords, was the latest of the Nayib Bukele administration’s efforts to erase the memory of any political merit of those before him.

“Whoever wants to celebrate this illegitimate agreement, go ahead. This is a free country,” Bukele tweeted on January 16, “but it will no longer be a national holiday.”

“To those in the ‘international community’ who practically demand that we celebrate: Stay out of it,” he added. “We don’t question why you don’t celebrate parts of your history.”

Nuevas Ideas has argued that the accords, which ended a 12-year conflict that took some 75,000 lives, were no more than a business deal between the far-right ARENA and the former guerilla front FMLN —the two main opposition parties now— to ensure themselves impunity and distribute power (never mind that Bukele himself started his political career with the FMLN only nine years ago).

His administration went as far as to refuse to commemorate the day of the Peace Accords in 2020 and 2021.

Salvadoran human rights defender Celia Medrano said this interpretation is a mischaracterization. “Of course we have to remember the victims. It was never said that the anniversary of the peace accords was to remember the protagonists,” Medrano told El Faro English. “The peace accords were based on recognizing that we should never return to living a level of confrontation and closure of political democratic spaces that led us to war.”

“And that’s what they’re doing now,” she added.

Geoff Thale, former president of the Washington Office of Latin America (WOLA), told Prensa Comunitaria that the peace accords “served as a foundation so that in El Salvador there existed a system of control and political balance, a functional judicial system, and a political party system.”

“What Bukele seems to be doing is marginalizing the political opposition and undoing the control systems that the peace accords created,” he continued.

A New Opening for the Jesuit Massacre Case?

Medrano says that Bukele has selectively supported transitional justice efforts when they serve a political purpose to attack his adversaries. On January 5, El Salvador’s Constitutional Court ordered the reopening of the case for the 1989 murders of six Jesuit priests, their housekeeper, and her daughter. The decision came after Attorney General Rodolfo Delgado requested a revision of a previous decision to close the case in October 2020.

The involvement of former ARENA President Alfredo Cristiani, who has been named as a potential intellectual author or as an accessory after the fact but never formally accused of any crime, could be used as justification to cancel the far-right party, said Medrano.

Bukele has also used the case to accuse the University of Central America (UCA), one of the institutions seeking to provide justice for victims for decades and now an often vocal critic of his government, of being soft on perpetrators of human rights abuses.

“When it came down to it, Bukele backed the military in violation of every international law,” Jo-Marie Burt, an expert on transitional justice and professor at George Mason University, told El Faro English.

During the last two years, Bukele has given the military its biggest budget since the end of the Peace Accords and promised to double the number of soldiers to 40,000 within five years.

A documentary for PBS Frontline that aired in November, which El Faro co-produced with ProPublica and Retro Report, details the historical challenges of bringing to justice the perpetrators of the El Mozote massacre, as well as the new ones. Watch the documentary here.

Detached from the political currents of the moment, in October a court closed El Salvador’s first civil war-era case in an unexpected way. Instead of issuing a prison sentence, the kidnapping case concluded with a letter of apology to the victim from one of the perpetrators, now 52. Then the courtroom sat stunned as the victim and perpetrator wrapped their arms around each other and embraced.

Armando Durán, who was kidnapped for 37 days in 1987, thanked the judge. “The victims of the armed conflict do not want revenge, only justice,” he said.

He also asked that the guerrilla commanders who masterminded the crime —who he alleges include former FMLN President Salvador Sánchez Cerén, currently in Nicaragua after fleeing corruption charges— be held criminally accountable, not just the person who carried it out.

In Guatemala, the battle for historical memory also fights to survive political tensions. A new genocide trial is expected to begin this year against two high-ranking military officers, Manuel Benedicto Lucas García and Manuel Antonio Callejas. The case revolves around the killing of more than 1,700 Indigenous Maya people from 1978 to 1982 in the Quiché region of Guatemala. Charges were brought against them in August, but the trial’s exact date has yet to be set.

Guatemala, which signed a peace agreement on December 29, 1996, stood as a paragon in Central America over the past decade by lodging major convictions against powerful politicians and members of the armed forces for abuses committed during the armed conflict. But in recent years, the country has faced similar grave attacks on judicial independence.

During a decades-long civil war, in which impoverished Indigenous groups were largely pitted against the ruling elite, the atrocities committed by Guatemala’s military constituted genocide were well documented. Even so, genocide denialism remains entrenched in the political far-right—and many of the perpetrators remain in power.

In 2013, former general and coup President Efraín Ríos Montt was already convicted of genocide against the Maya Ixil people. Shortly after, the nation’s highest court overturned the ruling on a technicality, but a retrial reached the same conclusion in 2018 after Ríos Montt’s death. Zury Ríos, his daughter and a career politician, has positioned herself as an early frontrunner for the 2023 presidential elections despite a controversial constitutional prohibition of the office for the descendants of coup presidents.

While new trials move forward in Guatemala, such as the case against five paramilitaries for the rape of 36 Mayan Achi women, actors within the justice system find other ways to stall progress.

In October, Attorney General Consuelo Porras, who was named to the ‘Engel List’ of corrupt Central American officials, transferred experienced human rights prosecutor Hilda Pineda, who worked important cases such as the genocide case against Ríos Montt and the ongoing case of forced disappearances known as Diario Militar (“military diary”), and the newest genocide case opened in August.

“I’m afraid that they will start using these cases just to tell the international community that they are moving,” Samayoa, head of Guatemala’s ​​Human Rights Defenders Protection Unit (UDEFEGUA), told El Faro English, “While in the present we have corruption, human trafficking, and organized crime.”

The unit that Pineda led was in charge of the ongoing case Diario Militar, in which 12 high-level military officers are accused of the forced disappearances, kidnapping, and torture of more than 180 perceived dissidents kept on a secret military hitlist from 1983 to 1985.

“As for whether that will happen,” she added, “the problem is cleansing a justice system that no longer respects prosecutorial autonomy.”

Pineda’s removal is part of a larger attack on independent prosecutors, according to Burt, who said she fears that Porras will move to disarm the whole human rights unit as she did with the anti-corruption unit led by exiled prosecutor Juan Francisco Sandoval.

“In many cases, it’s the same individuals who are involved in human rights abuses in the past and crimes in the present,” Burt said. “It’s a network that is engaging in all of these forms of cooptation to throw a sledgehammer into the independent justice process.”

“They don’t want independent justice,” she added. “They want a justice they can control.”

A final note: Martin Toc, at the center of our last week’s newsletter, announced Monday, January 17, that he will run for president of Guatemala in 2027. You may want to revisit the interview he granted to El Faro English.

P​lease consider funding our journalism, which, as you know, has been the target of an espionage campaign, at support.elfaro.net.