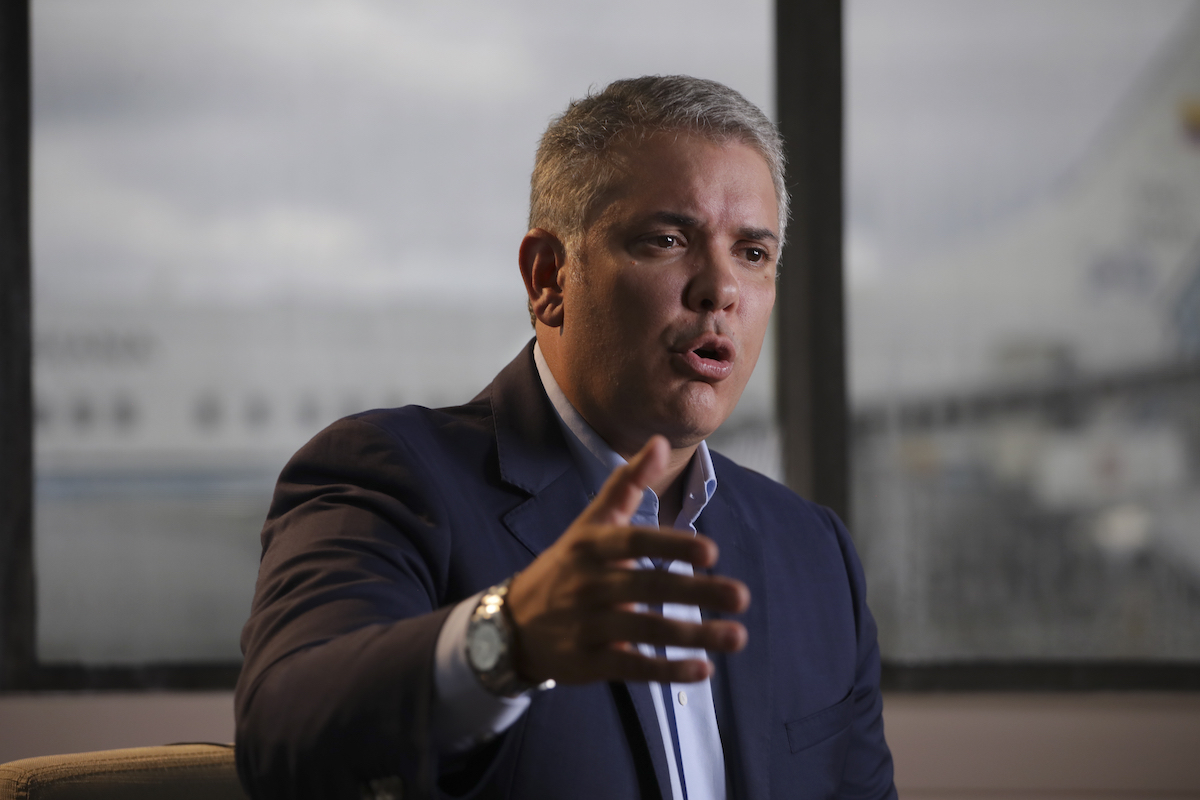 BOGOTÁ, Colombia — In the first week of the year, nearly 30 people were murdered in the eastern Colombian border town of Arauca in less than 24 hours. The media did not know with certainty if the dead were fatalities of combat or the victims of another massacre—last year the Institute for Development and Peace Studies (INDEPAZ) registered 88 incidents.

After a few years of fragile peace, Colombia is against spiraling into violence, and experts say that responsibility lies squarely on the shoulders of President Iván Duque and his government, a firm ally of the United States.

Colombia continues to have the largest number of internally displaced people in the world. The UN Office for the Coordination of Humanitarian Affairs published a figure that exemplifies the situation in Colombia in the last year of the Duque administration, showing that internal displacement between January and August 2021 was 135 percent higher than during the same period in 2020.

“The Duque government has not implemented the agreement,” Sen. Iván Cepeda, leader of the opposition, tells Latino Rebels. “He does not believe in the peace agreement, and his only response to problems that exist in the territory such as Arauca is militarizing.”

Arauca, the location of the last massacre, lies in a rich oil zone bordering Venezuela and has the highest unemployment rate in the country, at 32.5 percent. It is also the stronghold of the National Liberation Army (ELN), which has been expanding its sphere of influence after the disarmament of its main rival, the Revolutionary Armed Forces of Colombia (FARC).

The failure to comply with the commitments made in the peace deal led to an increase in FARC dissidents who distanced themselves from the Havana agreement. Their presence has been growing in the southeast of the country year after year during Duque’s presidency. These dissidents see themselves as the real FARC and seek to recover the territories ceded after the agreement.

One of those territories is Arauca, a region that is also fully militarized—according to official figures there are 6,800 soldiers in the area. In response to the massacre, President Duque ordered the addition of two more battalions to contain the violence, an answer that seems insufficient given the root causes of the worsening conflict.

Failures in the Implementation of the Peace Agreement Fuel Violence

On September 26, 2016, the Colombian government led by former President Juan Manuel Santos, who would win the Nobel Peace Prize, signed an agreement after four years of negotiation in the midst of a decades-long war with FARC guerrillas. The agreement aimed to resolve the objective causes of the conflict that left more than 220,000 civilians dead in over 50 years.

In addition to a transitional justice model, reparation for victims, and a reintegration route for the more than 13,000 combatants, the agreement pointed to three key issues that were the original reasons for the FARC’s uprising: 1) agrarian reform, in a country where one percent of the population owns 81 percent of the land; 2) guarantees of political participation, in a country where leftist governments have never entered the House of Nariño; and 3) a change in the country’s anti-drug policy—drug trafficking has fueled the Colombian conflict.

“On these three fundamental issues, the government has not made any effort to implement the agreement,” says Sen. Cepeda.

Doris Rivera is a leader in the Llanos Orientales region south of Arauca, another area where combats, bombings, and kidnappings are on the rise. FARC dissidents have been strengthening their military muscle there and are trying to build a corridor that connects the border with Venezuela in the east to the Pacific Ocean in the west.

Duque’s government defends compliance with some points of the agreement, saying its “peace with legality” plan is a big success. “Those who think that the agreements should be applied as they were signed in Havana are wrong,” says Emilio Archila, an official in charge of implementing important parts of the agreement, in a recent interview with El Espectador.

Once the agreement with the FARC was signed, the government of Juan Manuel Santos announced negotiations with the ELN. But after the bombing of a police school in Bogotá that left 23 dead, the Duque’s newly inaugurated government ended the talks in 2018.

Since then, the ELN has been growing in military power, especially on the border with Venezuela. “The ELN has strengthened its presence in the entire border area from Catatumbo to Arauca,” analyst Luis Celis explains. “It has gained space for other illegal groups in the last three years. For example, it is said that they moved his special forces from the Structure of Domingo Lain de Arauca to Catatumbo. That shows that it is an organization with capacity.”

According to early reports from the Prosecutor’s Office, the 27 deaths on January 3 were mostly caused by the ELN amid its territorial dispute with FARC dissidents.

Some groups are the legacy of the demobilization of right-wing paramilitaries and directly linked to narcotrafficking. The strongest, the Gulf Clan, even has operations beyond the border with Panama.

“The absence of a peace policy generates the effects we are seeing,” Sen. Cepeda sums up the current situation in the country. “And in the face of elections, it may be worse.”

This year there are congressional elections in March and presidential elections in May, which should place Colombia on an immediate path moving forward. The favorite in the polls is the progressive leader and ex-guerrilla Gustavo Petro, a fervent defender of the peace accords.

Social sectors and analysts, such as Luis Celis, demand an expansion of the commitments made in the agreements through the involvement of other armed actors. “With the ELN, you have to open a peace process. With the dissidents, a negotiated submission,” he explains.

Cepeda agrees, adding: “The solution lies in the elections in the next few months, that an elected government has a radically different vocation from that of the current government.”

There are more than a few political sectors that warn of a possible resurgence of violence during the next and final months of the Duque administration. But in a country that, in addition to violence, has been marked by the social protests of 2019, a hunger crisis that affects more than 40 percent of the population, and the economic consequences of a global pandemic, the peace agreement is no longer the main issue concern on the campaign trail.