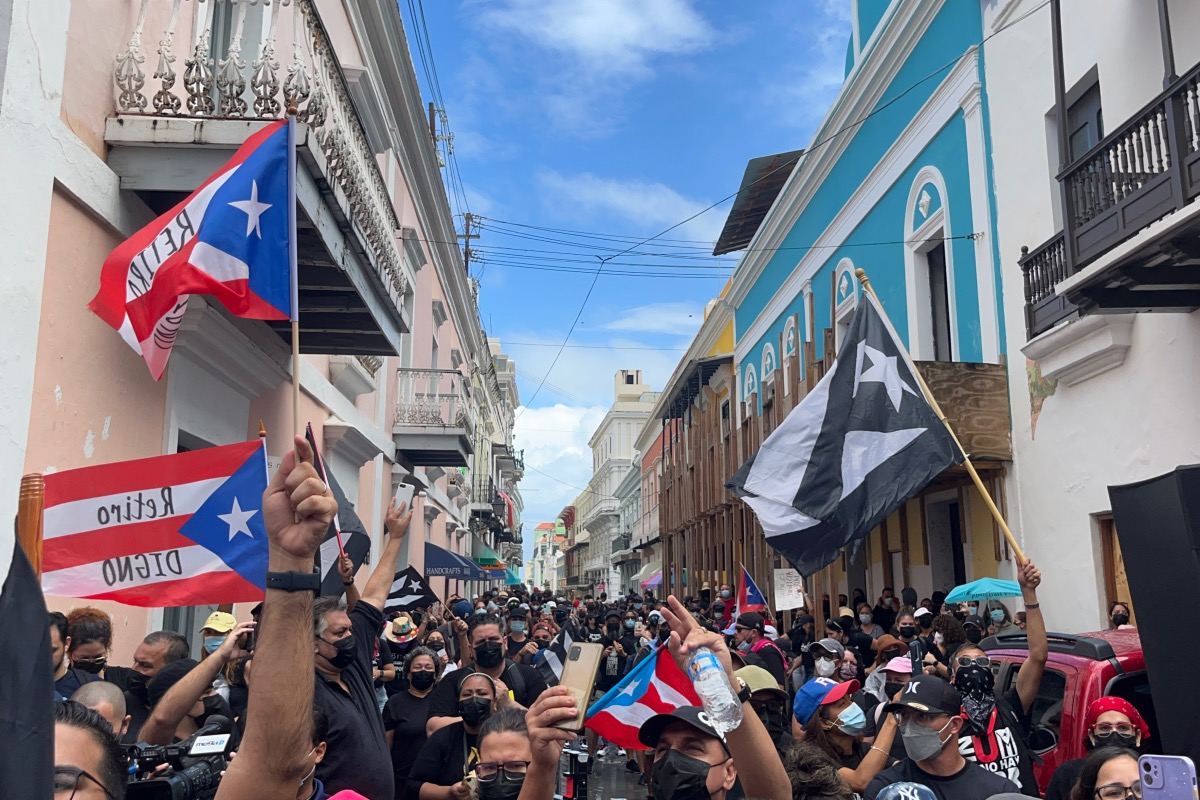 SAN JUAN, Puerto Rico — On Friday, classrooms across Puerto Rico continued to sit empty as thousands of public school teachers protested at the foot of the Capitolio, home to Puerto Rico’s legislature, and then walked to the governor’s official residence, La Fortaleza, to demand fair pay and pensions.

“The governor of Puerto Rico and the legislature is responsible for us being here today,” Mercedes Martínez Padilla, president of the Teacher’s Federation of Puerto Rico (FMPR), told the crowd of thousands gathered at a blockade leading to the governor’s home. “They are pretending that we should work until 31 years of service, until 63 years of age for pensions that are just crumbs.”

Puerto Rico’s teachers’ unions are demanding the government raise their base pay from $1,750 to a $2,700 minimum and keep their pensions from being lowered any more than they already have been.

The four days leading up to the Friday protest saw more than 4,500 public school teachers absent from their schools in what’s been widely dubbed the “Teacher Flu.” Since Monday, January 30, multiple schools across the archipelago have experienced a partial or complete shutdown due to teacher absences.

The Department of Education reported that only 28 percent (5,886) of Puerto Rico’s teachers reported to their schools on Friday, February 4.

The PAD affects multiple parts of the government’s funding, but for many teachers, it means they will likely never be able to fully retire due to cuts to the previously established Teacher’s Retirement System, which guaranteed public school teachers a pension equal to 75 percent of their salaries.

Hoping to offset this blow, the PAD included a $470 increase to public teachers’ base salary to be doled out in two phases, with the first set to go into effect in July 2022 without strings attached. The second phase would go into effect in January 2023 if the Department of Education registers an assistance rate for both teachers and students over 90 percent in the preceding months.

The PAD’s proposed salary increase would take teachers’ base salary pay from $1,750 to $2,220, though some teachers say this would not be enough for them to survive. 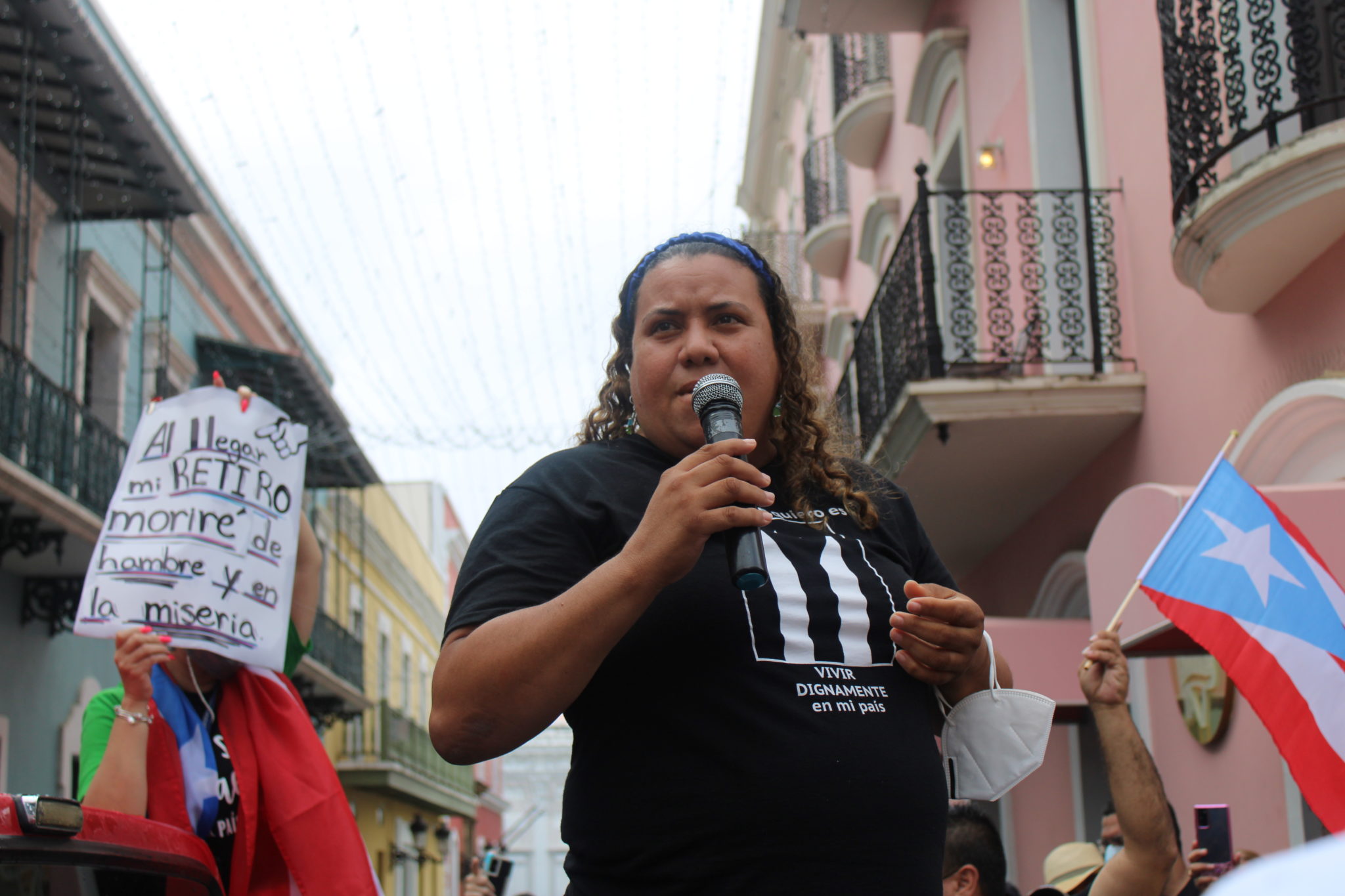 Public school teachers in Puerto Rico last saw a raise to their base pay in 2008, when it went up from $1,500 to the current $1,750. In the 14 years since then, the rising cost of living and inflation have found this already low wage drastically lacking. Many teachers have had to find second or third jobs to get by.

“I do tutoring in the afternoon and I also give classes at night at the university,” said Juan Ruiz Goyco, a teacher from Arecibo. “I have a Ph.D. and I barely even make it to $2,000 with the Department of Education. I have to look for other jobs to survive. It’s just not enough.”

Pablo Mas Oquendo was another teacher who had to get a second job as a tutor and a third job as a security guard to survive. While driving back from his guard shift in the early morning of February 1, he fell asleep at the wheel and hit a truck, dying instantly.

For many striking teachers, his death has become a symbol for everything they’re fighting for.

Multiple critics of the teachers’ strike have called into question the teachers’ commitment to their jobs, as their absences have left thousands of students without classes.

Gov. Pedro Pierluisi called on the teachers to return to work, pointing to students missing classes as his main concern. He then restated his commitment to meet the teacher’s demands.

“There are some responsibilities that cannot be relegated. Our students need now more than ever to be guaranteed adequate face-to-face education, and for that they need their teachers in the classroom. They are the raison d’être of our education system and their education must go above all else,” the Governor said in a statement.

“We’re showing students that when a pickpocket and corrupt government throws you to the ground, when it degrades the working class, the working class has to get up and fight for its rights,” teacher Lourdes Maldonando told Latino Rebels after leaving a meeting with the Department of Education inside La Fortaleza on Friday. “The teacher in the street is also educating. We can’t lose sight of the fact that even if we have our vocation, that vocation is not going to pay for electricity and water when I retire.” 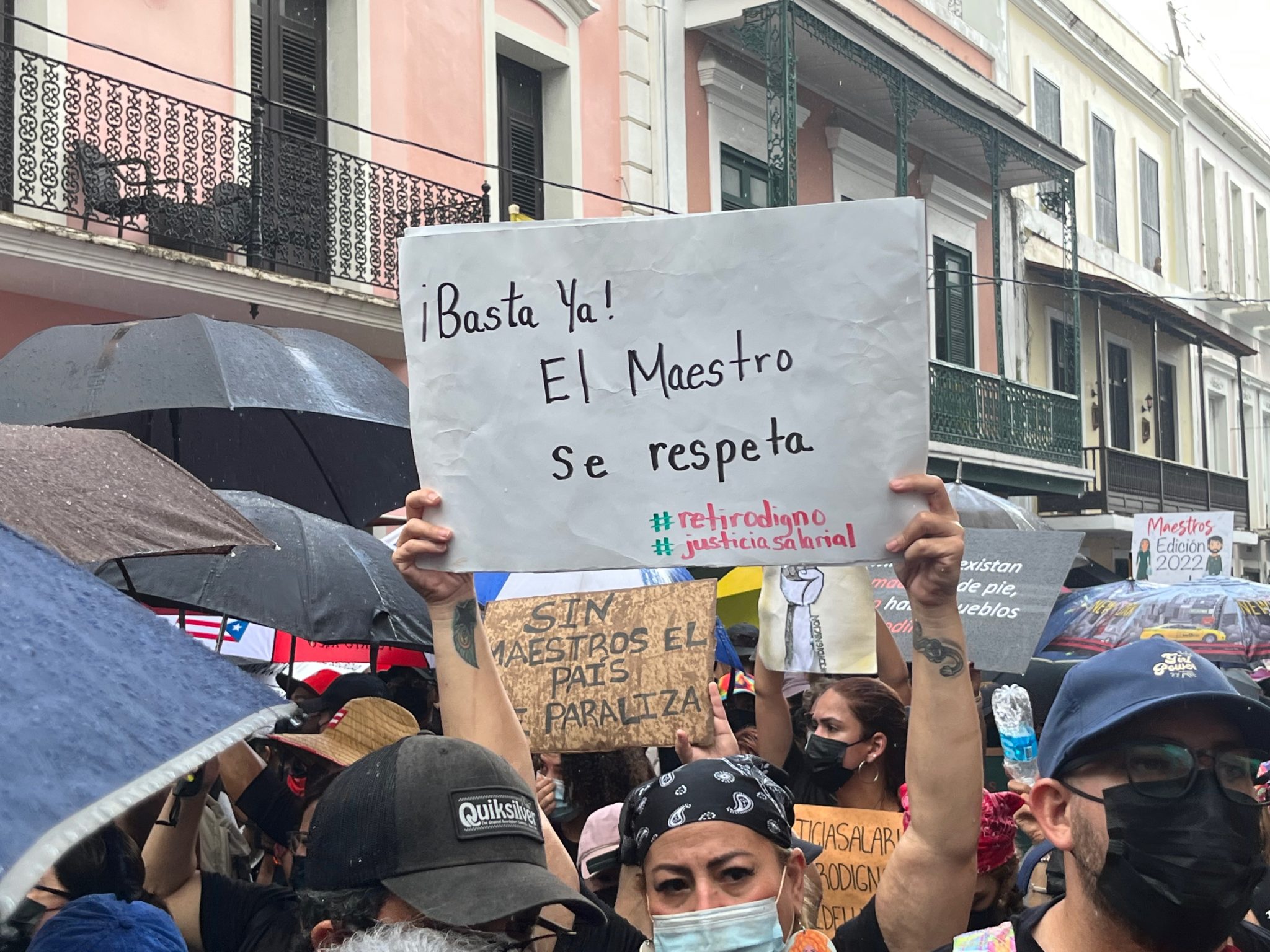 Many teachers have called into question the government’s commitment to educating Puerto Rico’s students, as hundreds of schools across the island remain either semi-operational or completely non-functional due to damages sustained by earthquakes and Hurricane María.

“The hurricane took away my school’s basketball court,” said Lourdes Torres Santos, a teacher in San Juan. “We are in 2022 and the court still does not have a roof. My students still play on the court under the sun. I am in a school on the coast and the sun hits very hard.”

Teachers across Puerto Rico, particularly those in the south, face similar circumstances at their schools.

Ruiz Goyco, a teacher from Arecibo, said he didn’t even have a classroom. Fifteen teachers rotated between a couple of classrooms every day. On Thursday, the day before the protest, Torres Santos’ school experienced a small fire caused by wiring that was damaged by Hurricane María in 2019.

The FMPR and other teachers’ unions have called for another “massive protest” starting from Luis Muñoz Rivera park at 8 a.m. on Wednesday, February 9, and proceeding toward the governor’s home.

They have also called for nightly “cacerolazos“ (pot-banging demonstrations) starting on February 7 through February 11.

Many teachers have warned that there could be a “wave of resignations” come March 15 if the PAD goes into effect as currently written.

One response to “‘We Don’t Want Crumbs’: Thousands of Teachers in Puerto Rico Strike for Fair Pay”