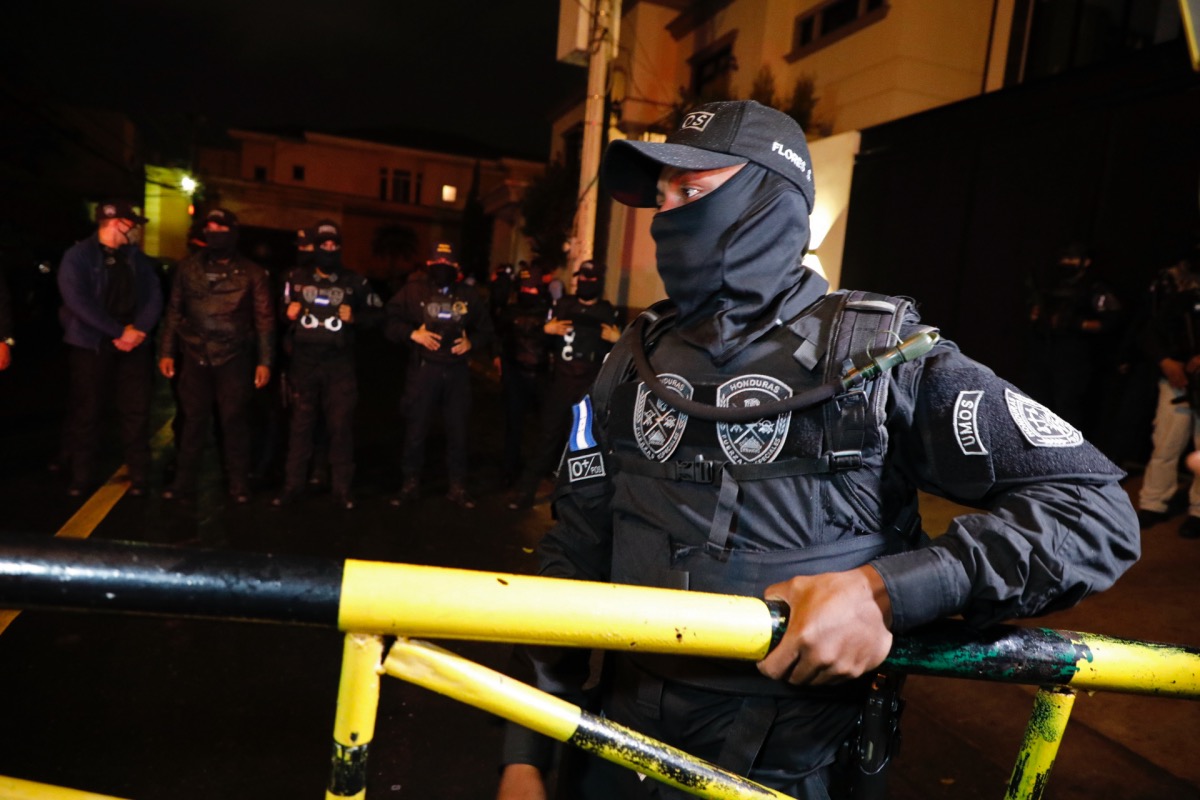 TEGUCIGALPA, Honduras (AP) — Police arrested former Honduras President Juan Orlando Hernández at his home Tuesday, a step toward fulfilling a request by the United States government for his extradition on drug trafficking and weapons charges.

The arrest came shortly after a Honduran judge signed an arrest order and less than three weeks after Hernández left office. It follows years of allegations by U.S. prosecutors of the Honduran leader’s alleged links to drug traffickers.

Hernández exited his home flanked by police, shackled at the wrists and ankles, and wearing a bulletproof jacket. He got into a police vehicle and was driven away. A police helicopter that had been waiting nearby took flight, but appeared to just be escorting the caravan.

The Supreme Court of Justice had designated a judge Tuesday morning to handle the case and hours later the judge signed the order for Hernández’s arrest, said court spokesman Melvin Duarte. The security ministry, which had Hernández’s home surrounded since Monday evening, moved quickly to arrest him.

Honduran Security Minister Ramón Sabillón, who was fired by Hernández as head of the National Police in 2014, said Tuesday that Hernández had conspired “with cartels to traffic (drugs) and corrupt many public institutions, which led to social deterioration and undermined the application of justice in Honduras.”

U.S. prosecutors in New York had repeatedly implicated Hernández as a co-conspirator during his brother’s 2019 drug trafficking trial, alleging that his political rise was fueled by drug profits.

His brother, Juan Antonio “Tony” Hernández, was sentenced to life in prison on drug and weapons charges in March 2021. At his sentencing, Assistant U.S. Attorney Matthew Laroche characterized the crimes as “state-sponsored drug trafficking.”

Nicole Navas, a spokeswoman for the U.S. Department of Justice, declined to comment late Monday about the U.S. extradition request.

Hernández released an audio recording via Twitter early Tuesday thanking his supporters. “It is not an easy moment,” he said. “I don’t desire it for anyone.”

He said his lawyers had informed the National Police that “I am ready and prepared to cooperate and go voluntarily … to face this situation and defend myself” if an arrest order is issued.

The identity of the judge chosen to handle the case was not immediately released. However, the court’s president, Rolando Argueta, is known to be close to Hernández, and all 15 Supreme Court justices were selected by Congress in 2016 during Hernández’s first presidential term. They serve seven-year terms, and most come from his National Party.

The U.S. moves were a long-awaited fall for a leader reviled in his home country and enjoyed support from the Trump administration but had been kept at arm’s length by the Biden White House, which has targeted Central America’s endemic corruption as a root cause of migration.

Last year, U.S. Sen. Patrick Leahy (D-VT) was one of a dozen senators who supported a bill that sought to isolate Hernández by imposing sanctions on him and prohibiting the export of tear gas, pepper spray and rubber bullets that Honduran security forces deployed in recent years against protesters.

“Throughout the past eight years of decay, depravity, and impunity, successive U.S. administrations sullied our reputation by treating Hernandez as a friend and partner,” Leahy said in a statement Tuesday. “By making excuse after excuse for a government that had no legitimacy and that functioned as a criminal enterprise, U.S. officials lost sight of what we stand for and that our real partners are the Honduran people.”

Dana Frank, a Honduras expert and professor of history at the University of California, Santa Cruz, said the U.S. wants to look heroic for finally trying to bring Hernández to justice, but that successive administrations going back to President Barack Obama enabled Hernández.

“Hernández was able to wreak havoc with Honduras, with devastating costs, in large part because the U.S. supported him up to the last minute,” Frank said.

Honduran criminal lawyer Marlon Duarte said that the extradition process against Hernández, if it moves ahead, would not last more than three months.

Once an arrest order is issued, Hernández would have to turn himself in or be forcibly taken into custody, he said. At an initial hearing, Hernández would be informed of the charges and he would be held on a military base.

Within two months, another hearing would be held in which the U.S. evidence would be presented and the judge would make a decision on whether he should be extradited.

Hernández left office January 27 with the swearing-in of President Xiomara Castro. The same day, he was sworn in as Honduras’ representative to the Central American Parliament.

One of his lawyers, Hermes Ramírez, told local media his client had immunity as a member of the regional parliament and said government forces were not following proper procedures. He said Hernández was inside the home.

Various contingents of the National Police, including special forces as well as military police, were present around Hernández’s neighborhood Monday night. Barriers at all of the entrances kept out media and even residents.

Members of the security forces entered the area with weapons, wearing balaclavas and with handcuffs dangling from their ballistic vests.

Hernández often pointed to the fact that Honduras began allowing the extradition of its citizens on drug trafficking charges while he was president of the Congress as part of his defense.

But U.S. prosecutors have alleged that he was taking bribes from drug traffickers on the promise of protecting them once he was president.

Hernández took office on January 27, 2014. He used a friendly Supreme Court to overcome Honduras’ constitutional ban on reelection and won a second term in 2017 in elections marred by irregularities.