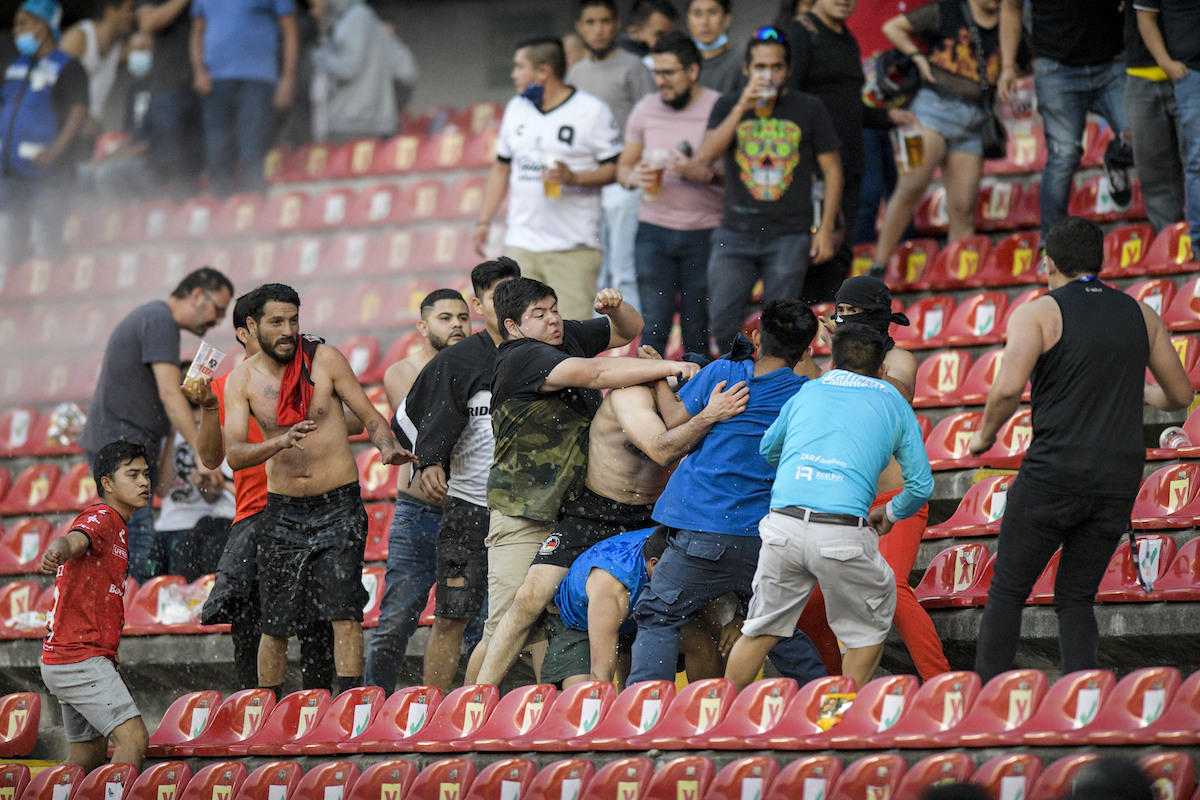 Fans clash during a Mexican soccer league match between the host Querétaro and Atlas from Guadalajara, at the Corregidora stadium, in Querétaro, Mexico, Saturday, March 5, 2022. Multiple people were injured in the brawl, including two critically. (AP Photo/Sergio González)

MEXICO CITY (AP) — Mexico’s top-division soccer league suspended all matches scheduled for Sunday after a massive brawl among fans during Saturday’s match between the host Querétaro and Atlas from Guadalajara, the reigning league champion.

“We regret and condemn these events, which run contrary to the spirit of our soccer,” the Mexican Soccer Federation said in a statement.

The Saturday match was suspended in the 62nd minute when multiple fights broke out in the stands. Security personnel opened the gates to the field so that fans, including women and children, could escape the stands.

Querétaro governor Mauricio Kuri said in videos posted early Sunday that 14 men had been hospitalized. Four of them had minor wounds, and eight were in stable condition, but two of the injured were in critical condition with severe injuries.

They may have been two men who were seen unconscious on the ground being repeatedly kicked and pummeled in videos posted on social media.

“They were savagely injured, which is a shame and a blot on soccer, for these type of things to happen, in a place that should be for families to go and have fun. This is totally unacceptable,” Kuri said.

After the melee broke out, players from visiting Atlas quickly fled to the locker rooms as did some from the Querétaro side. Other Querétaro players, including Uruguayan goalie Washington Aguerre, stayed near the bench trying to calm the fans.

After several minutes, some of the fights moved to the field where they continued punching and kicking. Some people were armed with chairs and metal bars.

One fan could be seen pulling a knife to cut the nets of one goal. Others destroyed one side’s bench and some fought in the tunnel to the field.

“The darkest day for Mexican soccer,” was the front-page headline in the Mexican newspaper El Universal on Sunday.

Guadalajara is the capital of Jalisco state, and Atlas has also had issues recently with violence among its fans. Last year, the “classic” with crosstown rival Chivas saw a brawl in the stands.

“Unfortunately, what is happening in Querétaro… is happening in my country,” said Rafael Márquez, a former captain of the Mexican national team who started his career with Atlas and later became its coach.

Kuri condemned the violence and said the owners of the Querétaro club would have to answer for what happened.

“I have given instructions that the law be applied with all of its consequences,” he said.