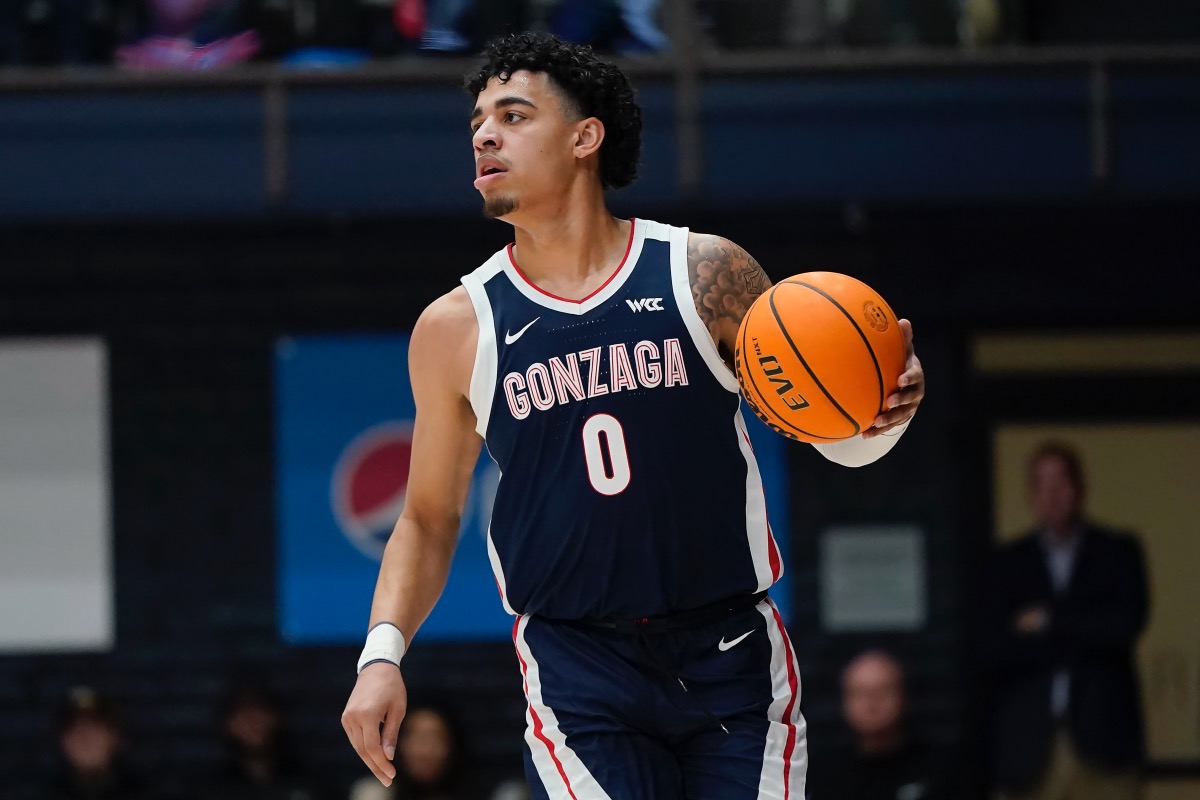 March is the most anticipated time of year for people who follow college basketball, and one of the most uniquely engaging for people who don’t. We fill out brackets, root for our alma maters, watch athletes from our cities, hate on our rivals—and if you’re Latino, you might cheer for a few of the players with Spanish names.

So here are some of the many standout Latinos to keep up with this month as their teams progress through the NCAA Tournament. Call it… Latino Madness.

Gonzaga is the No. 1 team in the country and the perennial favorite to win the men’s national championship. The continued progression of Boricua Julian Strawther is a key component for the Zags, who have made every NCAA Tournament since 2000, including the 2017 and 2021 national championship games, but have yet to win it all.

Strawther was briefly touched on in our feature on PURBasket, the Puerto Rico-based basketball recruiting organization that identified the 6-foot-7 swingman years ago. Currently, as the Bulldogs’ third-leading scorer, the sophomore is averaging 12.3 points and 5.5 rebounds a game while shooting 52 percent from the field and 39.6 percent from three-point range. He projects as a possible first-round pick in this year’s NBA draft, which takes place in June.

Strawther’s mother was Puerto Rican and passed away when he was nine years old due to breast cancer. He’s also proudly represented P.R. on the national team level and averaged 22.0 points at the 2019 FIBA U-19 World Cup, where the team finished sixth.

South Carolina, the No. 1 overall team in the women’s tournament, features 6-foot-7 Brazilian Kamilla Cardoso coming off the bench at center. The Gamecocks broke through and won their first NCAA title in 2017 and also reached last year’s “Final Four” round before losing to Stanford by one point in the national semifinals. Despite having logged just 14.2 minutes per contest this season, Cardoso is South Carolina’s fifth-leading scorer at 5.8 points per game, second on the glass averaging 5.5 rebounds, and first in blocks at 4.3 per 40 minutes.

As a freshman last year at Syracuse University she averaged 13.6 points, 8.0 rebounds, and 2.7 blocks per game while being honored with Co-Defensive Player of the Year, Freshman of the Year, and named to the First-Team, All Defensive-Team and All-Freshman teams in the Atlantic Coast Conference.

Tennessee is currently the No. 3 seed in the South despite being No. 5 in the current Associated Press Top 25. The Volunteers are one of the hottest teams entering the tournament, coming off a Southeastern Conference (SEC) title run as part of seven consecutive wins, and a 12-1 record since February 1. Santiago Véscovi, a native of Montevideo, Uruguay, and Zakai Zeigler from Long Island, New York with Puerto Rican ancestry, have been at the core of the Vols’ late-season breakout.

The 6-foot-3 Véscovi is second on the team scoring (13.4 points per game) and passing (3.1 assists) this season, while hitting 39.6 percent from three-point range and nearly 80 percent on free throws. The junior was also named to the All-SEC First Team before the tournament and competed on the Uruguayan senior national team at the 2019 Pan-American Games and 2020 Olympic qualifiers the past few off-seasons.

The 5-foot-9 Zeigler was recently at the center of one of college basketball’s most memorable stories. His mother and four-year-old nephew saw their home damaged by a fire, and fans around the country donated over $350,000 in less than 24 hours to a GoFundMe.

As Tennesse’s sixth man, Zeigler is currently fourth in scoring at 8.6 points per game, third in distribution at 2.6 assists per contest, and second in steals with 1.8 per game. The freshman earned All-Freshman and All-Defense honors this season.

Graduate student Raina Perez is the starting point guard for the No. 1 seed in the Bridgeport Region. NC State may have their best team ever on paper and are looking to reach beyond the “Sweet Sixteen” round, which is where they’ve been eliminated in each of their last three tournament appearances.

The 5-foot-4 floor general dishes out a team-high 2.9 assists per game and is fifth in scoring at 8.4 points while shooting 44 percent from the field, 39 percent from three, and 91 percent on free throws. The Arizona native was an All-ACC Honorable Mention last season, her first at NC State after transferring over from Cal State Fullerton, where she was the Big West Conference Player of the Year in 2020.

Arkansas is a No. 10 seed in the Spokane Regional and is the underdog against No. 7 Utah in round one of the tournament. Arkansas is in the tournament for the second straight season and was a No. 13 seed last year, nearly upsetting No. 4 seed Wright State before losing 66-62.

Five-foot-9 Amber Ramirez has led the way this season, accounting for a team-best 15.1 points per game and hitting 41.8 percent of her threes en route to All-SEC Second-Team honors. The redshirt senior is third in rebounds and assists with 4.7 boards and 2.0 dimes per game, respectively.

Ramirez was one of the best high school players in the country, named both a McDonalds’ All-American and Jordan Brand All-American as a senior in 2016, and was part of Team USA’s U16, U17, and U18 clubs before college, highlighted by a gold medal in the Americas Championship. Ramirez is a native of San Antonio, Texas, and is of Mexican descent.

Illinois, who had been one of the top teams in the country all season, dropped to a No. 4 seed in the Southern Region after losing in the quarterfinals of the Big Ten Tournament, where they were the first seed. The team is led by 7-foot center Kofi Cockburn, along with a bevy of Boricuas: Trent Frazier, Alphonso Plummer, Andre Curbelo, and RJ Melendez.

?With the commitments of Alfonso Plummer and RJ Melendez and the return of Trent Frazier, Puerto Rico will now have 5 players including Curbelo and Padilla Jr. suiting up for @IlliniMBB in the 2021-2022 season.#NCAAPURBASKET pic.twitter.com/9V64XKrYCc

The 6-foot-2 senior Frazier, whose mother is Puerto Rican, was named to the Second-Team All-Big Ten last week and the All-Defensive Team for the second consecutive season, averaging 12.1 points, 4.1 assists, and 1.3 steals while running point for the Fighting Illini.

Six-foot-1 point guard André Curbelo was the Big Ten’s Sixth Man of the Year as a freshman last season, and is averaging 8.1 points, 3.2 rebounds, and 3.2 assists per game in the same role. The Vega Baja, Puerto Rico-born Curbelo also has the most accomplished international career, having led Puerto Rico to a U-15 gold medal at the 2016 Centrobasket and a bronze at the U-17 World Cup in 2018. He also played on the aforementioned U-19 World Cup Team with Strawther in 2019.

Arecibo native RJ Melendez, the lone freshman of the group, has posted 3.6 points per game while averaging eight minutes through 21 appearances. In 2019, played with the U17 Puerto Rican team that earned a silver medal at Centrobasket.

Smith, a senior, averages 5.0 points per game off the Louisville Cardinals bench, who are No. 1 in the Wichita Region. The 5-foot-9 guard tried out for the Puerto Rican national team this past summer and could very well be a national champion in a few weeks.

Quiñones is in his junior season at Memphis, a No. 9 seed in the West Region. The Brentwood, New York native is currently Memphis’ third-leading scorer at 10.1 points per game and played on the Dominican Republic’s U18 team at the 2018 FIBA Americas Championship.

Six-foot-7 sophomore Enrique Freeman is instrumental in Akron being back in the NCAA Tournament for the first time since 2013. Freeman averaged 13.2 points and 10.8 rebounds en route to earning Mid-American Conference Defensive Player of the Year and All-MAC Second-Team honors. Akron, a No. 13 seed, faces No. 4 UCLA in round one of the East Regional. Freeman is of Puerto Rican descent.