From LATINO BOOK REVIEW: World Premiere of ‘Migrare Mutare’ at the Kennedy Center 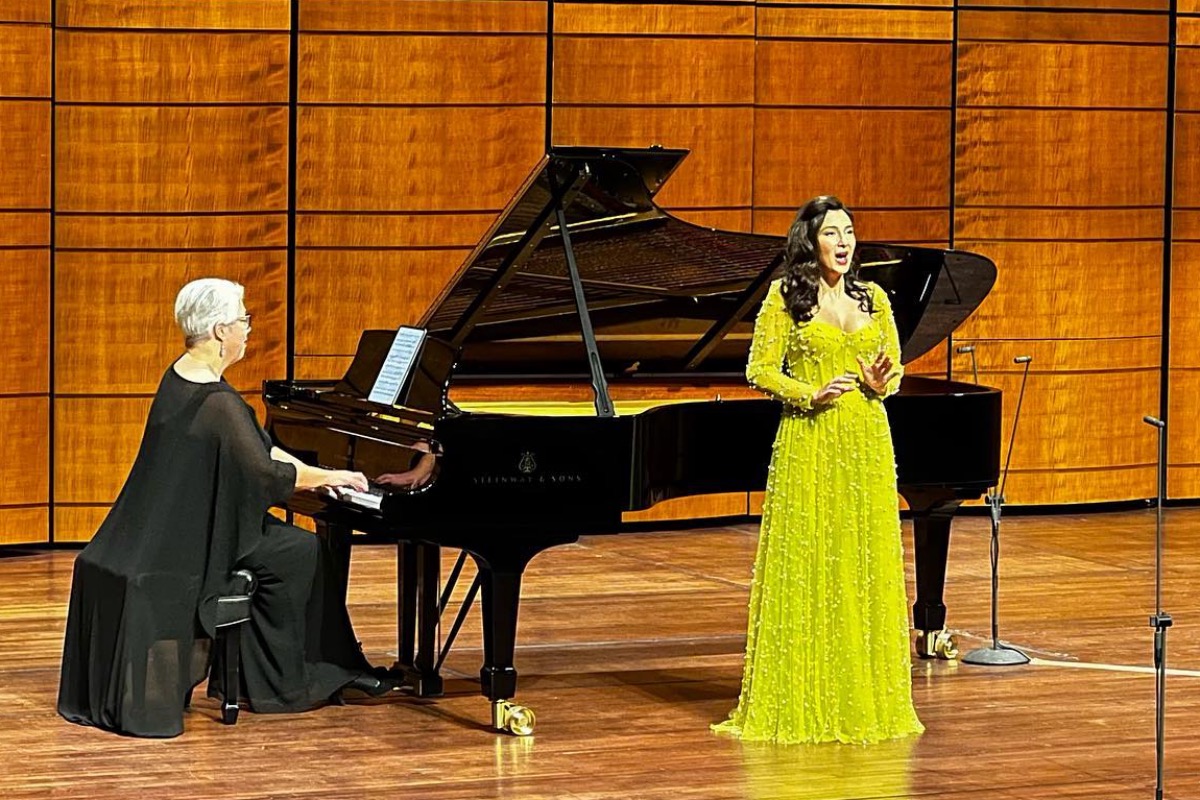 Soprano Elena Villalón and pianist Kathleen Kelly performing at the world premiere of ‘Migrare Mutare’ at the Kennedy Center for the Performing Arts in Washington, D.C., on Tuesday, March 15, 2022. (Courtesy of Latino Book Review)

“In any art form, the production, creation, and performance of new works is vital to the continuance of that art form, and in classical music, no less”—this is how the acclaimed soprano, Elena Villalón, opened the world premiere of Migrare Mutare at the Kennedy Center for the Performing Arts in Washington, D.C.
​
On Tuesday, March 15, Vocal Arts DC presented the world premiere of Migrare Mutare by the Venezuelan American composer Reinaldo Moya, with texts by Rossy Evelin Lima. Throughout the pieces, Moya’s musical genius portrayed a blend of longing and hope which was felt by a captivated audience. His virtuosity is definitely a force to be reckoned with.

Moya is a graduate of El Sistema music education system and Juilliard’s master and doctorate programs. His works cross many genres, including orchestral, band, and chamber, as well as opera. He is the recipient of various fellowships and honors, including the Ellis-Beauregard Foundation Composer Award, and is currently on the faculty at Augsburg University in Minneapolis.

The poet Rossy Evelin Lima is a Mexican American writer, scholar, and activist. Her situation as an undocumented immigrant has been a continuous theme throughout her poetry, including Migrare Mutare, her third poetry collection. She speaks in detail about the subject in her TEDx presentation entitled “Undocumented Dream,” as well as in the documentary Waking Dream by iNation Media, recently streamed nationally through Independent Lens/PBS.

She has received various national and international honors, including the Poet of the Year Award by the Americas Poetry Festival of New York in 2018 and a distinction by the Institute of Mexicans Abroad in 2016, among others. She has a Ph.D. in linguistics and is the translation coordinator and professor at Texas A&M University.

​The composer provided this note on the origin of the work:

“I found Rossy Lima’s poems through Elena Villalón, who suggested we use some of these texts from her Migrare Mutare collection for this set. I was immediately struck by Lima’s use of language and how precisely these animal metaphors corresponded to the experience of migration. These poems speak directly to what it feels like to change countries, languages, and cultures, and they provide a wonderfully vivid portrait of that process. Throughout this set, the songs aim to encompass the beauty and directness of Lima’s language, while also penetrating into the dark subtext of her metaphors.”

The pieces, magnificently executed by Elena Villalón and accompanied by pianist Kathleen Kelly, mesmerized the audience with every note. With a flawless stage presence and technical brilliance, Villalón promises a bright future for classical music in years to come.

Elena Villalón, a Cuban American, is currently a third-year studio artist with Houston Grand Opera. A Grand Finals winner of the 2019 Metropolitan Opera National Council Auditions, she most recently took home several prizes in the Hans Gabor Belvedere Competition, including the second-place prize, the Audience Prize, CS Prize, and the Wil Keune Prize.

Her 2021-2022 season features a number of debuts encompassing a variety of both operatic and concert repertoire. Notable opera engagements include house and role debuts at the Dallas Opera as Tina in Flight and at Austin Opera as Susanna in Le nozze di Figaro, as well as continued collaborations with Houston Grand Opera, where she will create the role of Amy in the world premiere of Joel Thompson’s The Snowy Day and debut the role of Juliette in Roméo et Juliette.

An avid recitalist, in concert, Villalón appears as the soprano soloist in Poulenc’s Gloria with the Grand Rapids Symphony and in Handel’s Ode for St. Cecilia’s Day with Boston Baroque.

​All in all, Migrare Mutare had a spectacular world premiere that showcased a stunning combination of Cuban, Venezuelan, and Mexican talent, and elevated a blend of arts to new heights. More important, it illustrated a universal theme of migration that connects all people when we decide to “cross the threshold of our literal and metaphorical borders.”