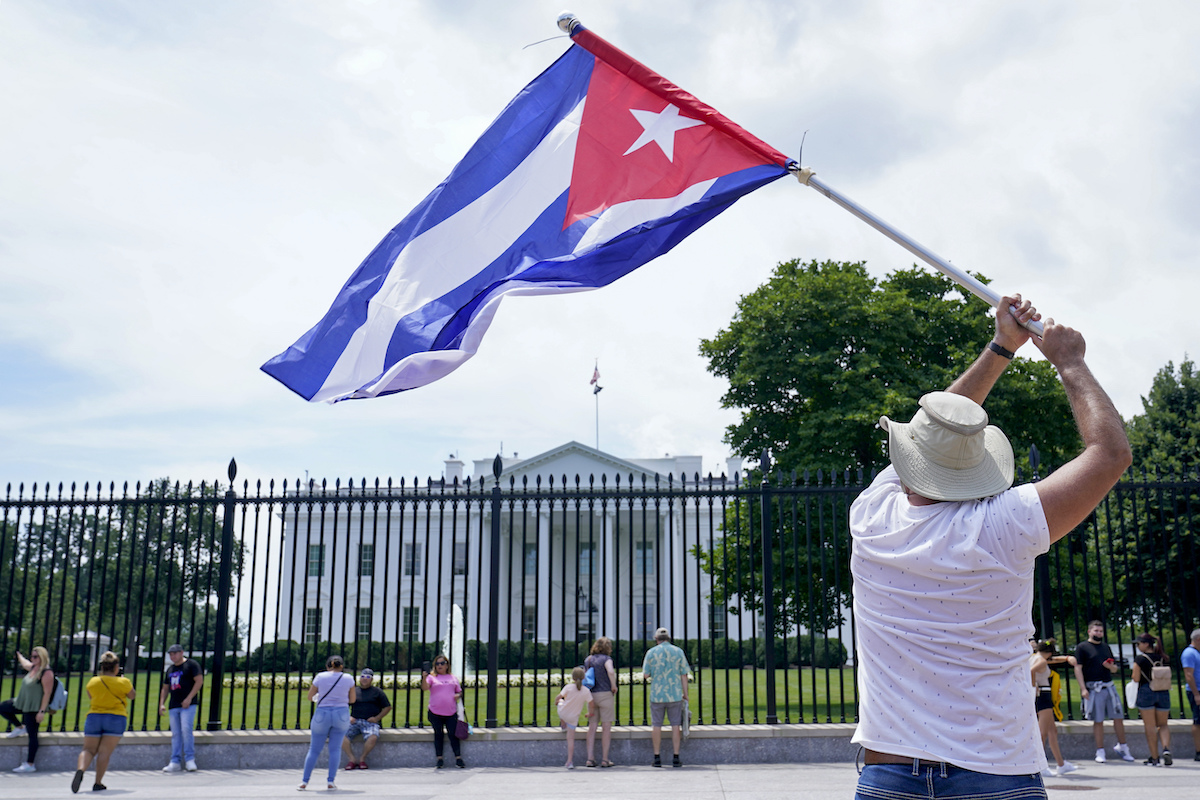 HOUSTON — The two-party capitalist-driven political system in the United States too often resembles that of foreign countries we were taught to fear. When it comes to elected officials in the U.S., it often feels like decisions about who we vote for have been made for us in advance. Electoral campaigns are driven by billions of dollars, and oftentimes the money that flows into a politician’s coffers is repaid with favors, making donations as much a financial investment as a political one.

Every voter in America has at one time or another heard rumblings of corporate influence on politics—particularly after the Supreme Court’s 2010 ruling in Citizens United.

These days, political discourse typically revolves around members of either party being “bought” by the billionaire class and corporate America. Frankly, if there’s one thing you can get most in the U.S. to agree on, it’s the outsized influence money has on elections and governance, which includes the subsequent and constant fundraising once elected.

Thus, many have questioned whether “democracy” is the right term.

The word “oligarch” has been thrown around a lot in the wake of Russia’s invasion of Ukraine, suggesting Russia is an “oligarchy.” Both terms are used mostly in reference to wealthy Russian business leaders being part of Vladimir Putin’s inner circle.

An oligarchy, however, is defined as “a government by the few … in which a small group exercises control for corrupt and selfish purposes,” and in it’s in that sense that the term “oligarchy” has been applied to the United States by many economists. Others have argued that the economic control held by a few corporations makes the U.S. an oligopoly, “a state of limited competition, in which a market is shared by a small number of producers or sellers.”

Some even refer to the U.S. as a “plutocracy,” or a form of oligarchy defined as a “government by the wealthy.”

Similarly, Russia, Cuba, China, and Vietnam, among others, can also be classified as plutocracies. Within many of these arguments lies the idea that —aside from disparities in our electoral processes— the only major difference between the United States and those other countries is that we have a two-party system, what old-school conservative Pat Buchanan described in 1999 as “a snare and a delusion, a fraud upon the nation.”

“Our two parties have become nothing but two wings on the same bird of prey,” he said.

While other political parties exist in the U.S., they are often suppressed both politically and financially, with very few exceptions. It is because of that suppression that everyone from political pundits to conspiracy theorists has questioned the validity of the U.S. political system.

Of all the above-mentioned Soviet democracies, we often hear comparisons being made to Cuba in the United States. The political right focuses on the negatives and typically pushes for policies that further isolate the island, while ost on the left take the same position but with ideas that are mildly less repressive. The only exceptions lie among those referred to as “leftists,” who seek a more open and sanction-free relationship with Cuba.

While many in the U.S. focus on the success of social programs or the suffering of the people on the island due to a lack of access to world markets, what we never discuss is how elected officials get into office. In Cuba, elected officials must be members of the Communist Party, with candidates from other parties being widely denounced and suppressed by both the Cuban people and the government.

Campaigning is not allowed, as Cuba is run by councils. Candidates for municipal councils are first nominated by a show of hands in local meetings. The final round of voting is held in secret. Municipal councils select nominees for provincial councils who then nominate candidates making up half of the National Assembly.

The other half of both the National Assembly and the more than 27,000 municipal and provincial candidates are selected by an electoral commission to ensure Communist Party rule. In other words, Cuba’s so-called “democracy” is hardly democratic. But is the solution to turn elections by a show of hands into decisions made for the voting public by wealthy corporate donors as is done in the U.S.?

As both parties in the United States’ two-party system willingly accept money from many of the same corporations, more and more voters consider them no different than each other. The Republican Party’s embrace of extremism sets the political right apart, but from a policy standpoint, the two parties are eerily similar. We see it in Biden’s continuation of many of Trump’s policies, including the inhumane treatment of asylum seekers at the U.S.-Mexico border.

Another example is that of conservatives who wanted to blindly give police more money based on the belief that there is a war on cops. Joe Biden and the liberals gave police departments billions of dollars with no accountability.

Let’s also not ignore the fact that nothing unites Republicans and Democrats as wars do. They always come together for that.

Politicians across the country have gotten wealthy by doing favors for corporate America. From insider trading to paying politicians exorbitant amounts of money after they leave office to become policy wonks and lobbyists for “institutes” and “foundations” that function on behalf of corporate interests, U.S. politics is a game of wealth creation for the few lucky enough to sit in Congress and become buddies with oligarchs.

Technically, the United States could have more than two political parties. Many argue that the U.S. was designed to be a two-party system only. However, throughout history, the United States has seen many prominent political parties rise and fall. Having multiple parties is not out of the realm of possibility. Truthfully, the only thing standing in the way is the two biggest parties.

The Republican Party has seen fractures resulting in party spin-offs. After Obama’s election in 2008, we saw backlash in the form of Tea Party conservatives. Largely and loosely based on libertarianism, the Tea Party brought more extreme views to the table. Even their actions in Congress were far beneath the standards of decorum that have existed for decades.

The Tea Party promoted many conspiracy theories, from so-called “death panels” in Obama’s Affordable Care Act to the “birther” scheme adopted by Donald Trump to attack Barack Obama. As the Tea Party dragged Republicans further to the right, far-right extremists plotted their advance into politics, particularly in Washington, D.C.

Those strategies, along with the promotion of hateful ideas such as the “White Extinction” conspiracy theory, became the norm in politics and right-wing media. Those preexisting ideas alongside the complacency during such a critical time paved the way for a wannabe autocrat like Donald Trump. Once he brought hate speech out onto the world’s stage, it gave birth to the America First Party in all its hateful glory.

Meanwhile, Democrats are still Democrats. They point their fingers at Republicans and scream, “Look at how racist they are,” while seemingly doing little to nothing about it. With the exception of the “Squad” of progressive House Democrats, which consists of a half-dozen people, Democrats are doing what they’ve always done: attempting to bring us incremental progress while leaving millions behind.

But it’s that incrementalism that leads us backward. Using immigration as an example, the Trump administration took us to one of the most inhumane times in modern history regarding non-white immigrants. The Biden administration changed guards and one or two policies, but the clearly racist, state-sanctioned inhumanity and death continue.

Over time, it’s becoming much more difficult to distinguish one party from the other. One party relies on overt racism and bigotry; the other operates in a more covert fashion, using gradual progress as a marker for success. More and more, non-white people are growing incensed with modern conservatism while becoming disenfranchised by contemporary liberalism.

Meanwhile, conservative extremists hoping for a one-party system have embraced the hate. On January 6, 2021, tried to overthrow the U.S. government to install their dear leader. While Democrats may be co-stars in dragging this country to the right, they didn’t try to overthrow it. However, with such a low bar, how are we not at the point of considering other parties?

The Republican Party is already splintering off into more far-right factions, such as the Tea Party and the America First cult. They have people holding political office all over the country, sitting on school boards, city councils, sheriff’s offices, and in courtrooms. They represent the more militant arm of conservative politics.

The events of January 6 brought us closer than ever to a one-party Cuban-Soviet-style rule while exposing just how fragile democracy in the U.S. is. Whenever I hear conservatives decry Cuba’s government while supporting Trump’s actions and propping up the lie that the election was stolen —while supporting the efforts of trying to install Trump as a dictator— I laugh.

When it comes to “leftists,” it’s much deeper than hypocrisy. Conservative arguments are typically shallow and lack context. Many liberals, however, also miss a lot of contexts when discussing Cuba. It’s one thing to support the people of the island, it’s another to support the government. Making comparisons without discussing important details is disingenuous.

When someone says the two parties in the U.S. are two wings of the same bird, most tend to agree with that sentiment. But it is in no way comparable to Cuba’s so-called “democracy.” The United States claims to offer one thing Cuba doesn’t: opportunity for change, to change the guards almost at will. The reality is that the choices for the guardians of democracy are too often made for us, particularly on the state and federal levels.

This leaves us with a government that is quite similar to Cuba’s. The oligarchs in Cuba and their cronies are the leaders of the country. The leaders in the U.S. have corporations deep in their pockets making politicians the cronies to the oligarchs. Same thing but different.

Meanwhile, there are many solutions for fixing the electoral process in the U.S.—something Cuba did with its new constitution.