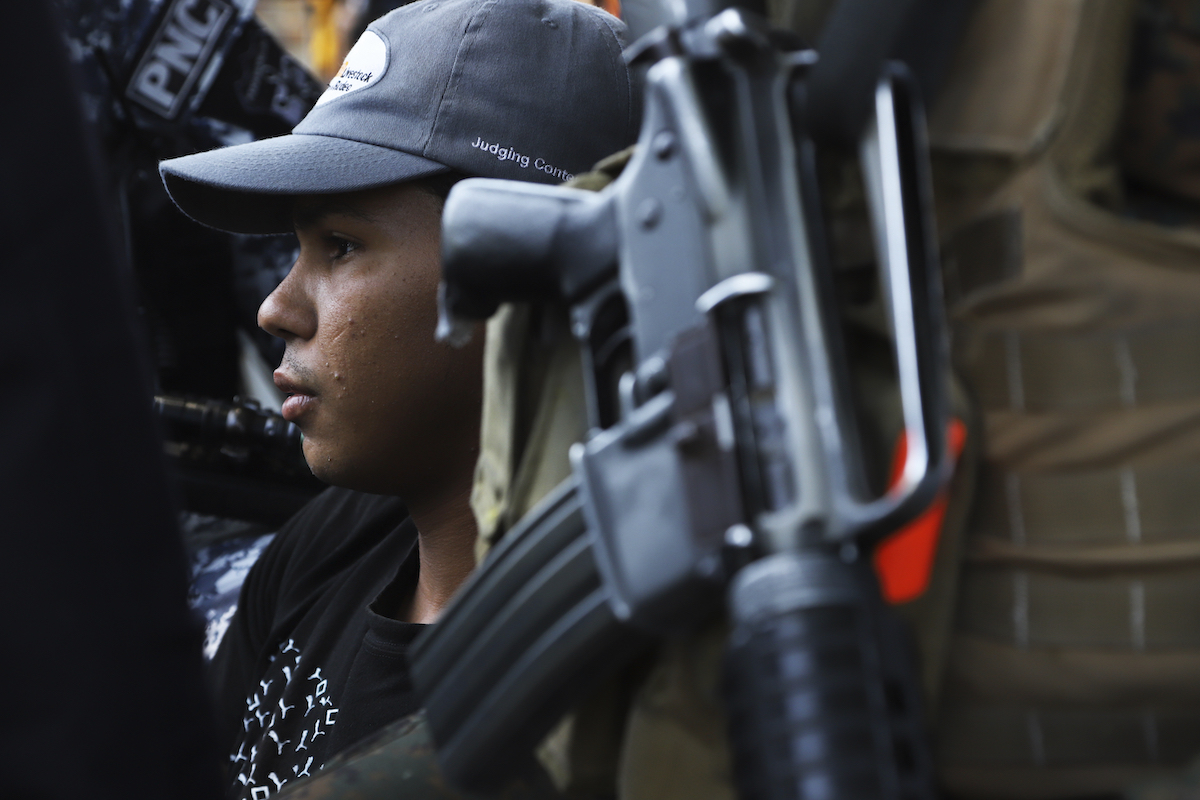 A young Salvadoran arrested as a suspect in a homicide during the State of Emergency is captured by the National Civil Police near a market in San Salvador, El Salvador, Sunday, March 27, 2022. The government of President Bukele authorized the Suspension of Rights and Freedoms in a decree approved by the Legislative Assembly to neutralize criminal groups related to the killings. (AP Photo/Salvador Meléndez)

Fourteen people were killed Friday and 62 people died Saturday, a scale of violence that has not been seen for years. By comparison, there were 79 homicides in the entire month of February.

Bukele announced the request Saturday on his social media accounts, and congress approved it early Sunday. The decree would suspend constitutional guarantees of freedom of assembly and loosen arrest rules for as much as 30 days, but could be extended.

The homicides appeared linked to the country’s street gangs, who effectively control many neighborhoods in the capital. The National Police reported they have captured five leaders of the Mara Salvatrucha or MS-13, who they claimed ordered the weekend killings.

Bukele wrote in his social media accounts that he was ordering the head of the country’s prisons to carry out an immediate 24/7 lockdown of gang inmates in their cells.

“They are not to go out even to the patio” of prisons, Bukele wrote, adding ”a message to the gangs: because of your actions, now your homeboys will not see even one ray of sunlight.”

While Bukele has tried to project a tough attitude on crime, the country’s enormously powerful street gangs have proved a double-edged sword for him.

“We must remind the people of El Salvador that what is happening now is due to the negligence of those who protected criminals,” the conservative Arena party said in a statement.

That was an apparent reference to a December report by the U.S. Treasury Department that said Bukele’s government secretly negotiated a truce with leaders of the gangs. That contradicted Bukele’s denials and raised tensions between the two nations.

The U.S government alleges Bukele’s government bought the gangs’ support with financial benefits and privileges for their imprisoned leaders including prostitutes and cellphones.

The explosive accusations cut to the heart of one of Bukele’s most highly touted successes in office: a plunge in the country’s homicide rate.

The president responded sarcastically via Twitter to the accusations. “Cell phones and prostitutes in the prisons? Money to the gangs? When did that happen? Didn’t they even check the date? How can they put out such an obvious lie without anyone questioning them?”

Bukele vehemently denied the accusation when it was reported in September 2020 by the local news site El Faro.

In 2020, Bukele’s administration ‘’provided financial incentives to Salvadoran gangs MS-13 and 18th Street Gang (Barrio 18) to ensure that incidents of gang violence and the number of confirmed homicides remained low,” the Treasury statement said. “Over the course of these negotiations with Luna and Marroquin, gang leadership also agreed to provide political support to the Nuevas Ideas political party in upcoming elections.”

The revelations raised tensions between Bukele and the Biden administration. After the new congress removed the attorney general and the justices of the constitutional chamber of the Supreme Court in May, the U.S. government expressed concern over the direction of the country.

The U.S. Agency for International Development announced it would shift aid from government agencies in El Salvador to non-governmental organizations.

Bukele enjoys extremely high popularity. He stepped into a political vacuum left by discredited traditional parties from the left and right.